STEVE WAY and JON SHARKEY set to represent their country 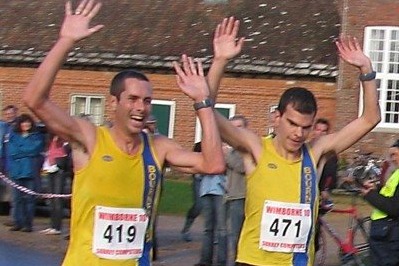 Most will by now be aware that two BAC athletes, Steve Way and Jon Sharkey, have been selected to represent England in the Anglo-Celtic Plate 100k, to be run at Gravesend on 3 May 2014, but their achievement deserves to be marked with some explanation of their journeys to this goal.
Steve‘s first foray into the 100k distance was in an open event in Stockholm on 4 August 2013. Of course he was familiar by then with Ultra-Distance, albeit just halfway to 100k, as he had competed in the 50k World Championships in 2012 in Italy, and won, with the result, of course, that we have in our midst nothing less than a WORLD CHAMPION. And Steve‘s run in Stockholm was worthy of a World Champion. Over 100k his split times hardly varied from 3.59/4.01, an incredibly disciplined run, and over the 12 lap course he lapped every other competitor. Steve‘s time of 6.40.14 ensured his place in athletics history, as he has become the 5th fastest British man over 100k EVER, and his selection for the Anglo-Celtic Plate competition was inevitable. Regrettably, as the 100k World Championship for 2013, scheduled to take place in South Africa, was cancelled and not re-arranged, Steve was denied the opportunity of achieving a second World Championship Title, but that doesn’t alter the fact that, in 2013, he was the fastest man in the World over the 100k distance.
In the meantime, Jon had decided it was about time that his well-deserved rest following his debut Ironman Triathlon earlier in 2013 came to an end and, encouraged and inspired by Steve, decided to take up the 100k challenge, and why not attempt a qualifying time for consideration for selection for the England team alongside Steve? The only problem was that races where this can be done are limited in number, and the only opportunity available to Jon was the Newcastle Racecourse Marathon, which incorporated a 50k race alongside the marathon and other distances, and a 3.22 50k time is one of the qualifying times. So, despite not having enough time to train fully for this distance before the race date of 8 December 2013, Jon decided to go for it anyway – after all the 100k at Gravesend is an Open 100k, so he’d still be able to compete even if not selected for the Anglo-Celtic Plate. But Jon knew exactly what he had to do at Newcastle to give himself a chance – ignore everyone else and run his own pace. And that is just what he did. The course was almost 19 laps of the racecourse and each lap was run in a remarkably even 6.24/6.29. Although, at the start, Jon was left in the wake of a number of other competitors he won the race by a huge margin of 30 minutes or so, double-lapping the second finisher. But, most importantly, Jon‘s time of 3.19.21 was within the qualifying time he sought, and it was just a question of waiting till February when the team for Gravesend would be announced.  And, sure enough, Jon‘s name was there!

The England team for the Anglo-Celtic Plate consists of five athletes.  Of those five, two (40%) will come from BAC.  All at BAC can justifiably feel very proud of Steve and Jon, and we wish them well with their training and for the competition itself at Gravesend on 3 May. 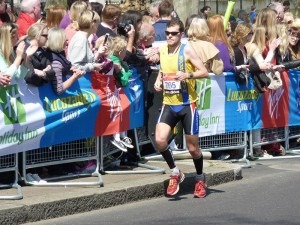