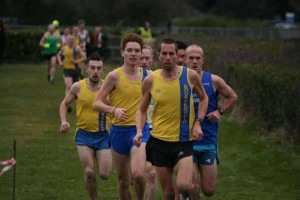 Steve Way, David Long, Rob McTaggart with Josh Cole following, on their way to a team win at Kings Park

The final Hampshire Cross Country League (sponsored by Destination Basingstoke) fixture was hosted in Kings Park on Saturday 7 February by BAC, and, first of all, many thanks are due to the marshals and officials who contributed to a successful event on a new course which appeared to be well received. Although the rain held off, a cold wind blew across the park for the entire afternoon, and many BAC members and their families stood out in the cold for up to 4 hours or more, without which the fixture simply could not have taken place. So thank you to everyone – your dedication was very much appreciated.  In all, 637 athletes competed during the day, from U11 boys and girls to veteran men and women, with 3 DNFs.

Congratulations, also, to our athletes, who produced a Senior Mens‘ team win, and individual race and category wins by Steve Way, David Long and Bridget Dence.  BAC‘s Senior Men at last showed what they can do in this League, with Steve finishing 4th overall (1st V40), followed in 5th place, after a run which can only be described as stunning, by David (1st U20).  David just stuck to Steve‘s shoulder throughout the entire race, finishing just 10 seconds behind him. Josh King again showed his strength across the country, with Rob McTaggart and Josh Cole completing the BAC team.  With Jamie Grose and Simon Munro finishing 16th and 17th, BAC had 7 finishers in the first 17!  The team accumulated only 43 points, the lowest for a very, very long time (the second team scored 67) and were the first team of ten complete Division 1 teams for the season.  After some average results in the earlier fixtures, the possibility was relegation to Division 2, but the solid result at Kings Park put this fear to bed, with BAC‘s Senior Men finishing 5th of 10 teams in Division 1.  It’s perhaps worth pointing out that the aggregate score was 1440, not that far away from Poole AC‘s 1956.  Poole AC finished top of Division 2, and will be promoted for next season, so, although this season can be described as reasonably satisfactory, we cannot rest on our laurels! 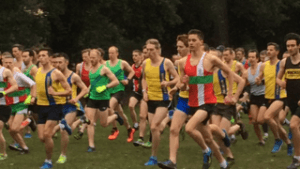 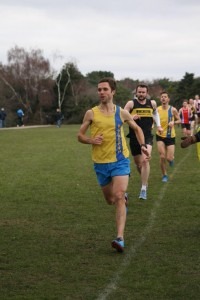 BAC‘s Senior Women also had an excellent result at Kings Park, the team being led by Heidi Tregenza, followed very shortly (11 seconds) by Nikki Sandell.  Heidi and Nikki both ran very close to one another throughout the race, which must have motivated them both, and resulted in high placing, 14th and 16th.  Cherry Sheffrin, with another strong run, completed the team, and, as ever, Louise Price was there to back up the team in case anything went wrong!  Many congratulations to Nikki, who was third Veteran Woman aggregate for the season, of a total of 41 women who completed sufficient races to qualify. 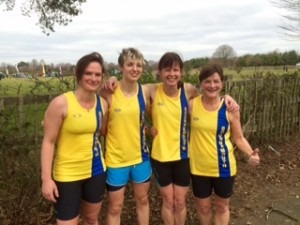 Bridget Dence ran very strongly to win the U17 Women‘s race, and congratulations to Bridget, not only for this win, but also for winning the prize for second U17W aggregate throughout the season.

It was very pleasing to see some of the youngsters who attend BAC‘s Junior Development evenings competing in the U11 races, Anya Sandell in the girls, and Finn Pardy (who was 4th), Toby Bailey-Pearce and Thomas Gordan in the boys.  Also well done to Hampshire CC League regulars, Brandon Meredith and Sebastian Hearn in the U17 Men, and Jim Dence in the U13 Boys.  Jim seemed to finish covered in more mud than might have been expected on a dry day, so it looks as if he may have had a fall, so well done for continuing to the finish!