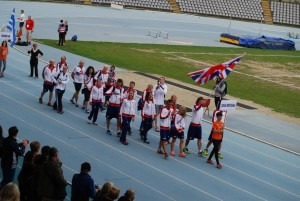 BAC has another World (and European) Champion! The club seems to be gaining something of a reputation in Ultra Distance running, as, this time, the event was the World and European 24 Hour Championships in Turin, Italy, on 11 April, in which Pat Robbins helped the GB team to an overall win, securing both World and European Gold Medals. Of a total of 179 male competitors, Pat was an astonishing 7th overall, running 128 laps ( we’re not quite sure of what!), with a running time of 23.54.22, so presumably Pat just didn’t have quite enough time to complete a 129th lap. The others making up the GB team were Robbie Button, 3rd overall, and Steve Holyoak, 11th overall. BAC‘s Ultra Distance pedigree must now be amongst the best in the country, with Steve Way as 50k World Champion, plus his achievements at 100k, and Jon Sharkey forming part of a winning England team at the Anglo-Celtic 100k Plate, in which Jon will again be competing for England again next month.  The GB ladies’ team also had a highly successful campaign at the World Championships, with Debbie Martin-Consani (perhaps not a BAC member, but a name we recognise!) completing 111 laps and finishing 11th overall of a total of 282 ladies, and, with Isobel Wykes (8th overall) and Sharon Law (11th overall), Debbie secured the European Bronze Medal.  Debbie‘s time was 23.59.43, so it looks as if, after nearly 24 hours of running, Debbie may have had to sprint to complete a lap within 24 hours!  Paul Consani was present in Turin to give invaluable encouragement to the teams, and hearty congratulations are due to Pat, and everyone else involved.

Some time later, on 19 April, Jacek Cieluszecki proved that he has shaken off his injury by winning the Bordeaux Marathon in 2.32.10. Jacek says that whereas the time may not be too impressive (really?) he decided that, in view of the fact that the course consisted of many twists and turns, and has cross-country sections, he would go for position rather than time.  Jacek‘s pacing to achieve this was immaculate, moving to first place, as he did, at 42k, and finishing 33 seconds before the second-placed athlete.  So well done to Jacek, and everyone is very pleased to see such a convincing return to form. 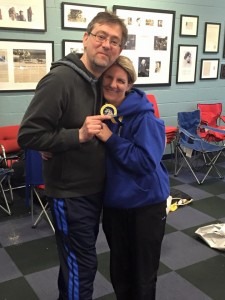 The next day, Caroline Rowley was starting the first of three marathons in almost the same number of weeks at the Boston Marathon on 20 April.  Conditions were far from ideal, with a bitterly cold headwind, leaving everyone very cold and wet at the finish.  The course is end-to-end, from the small town of Hopkinton to Boston, so the headwind would have been with the competitors all the way, and is also far from flat, with the notorious ‘Heartbreak Hill‘ at about 20 miles, just when you don’t need it.  So Caroline was justifiably pleased with her time of 3.33.27.  The next challenges for Caroline are the London Marathon and the North Dorset Village Marathon, as the main purpose in accepting these challenges is to raise money for charity, we congratulate Caroline and wish her every success in her next two marathons.

Of course, away from these events, life continues as normal, and another athlete returning from injury is Steve Way, who showed his progress by finishing 2nd in the Poole Parkrun on 18 April.  If this had been a competitive event, BAC would have taken all the honours, as Anthony Clark was 4th, Billy McGreevy was 6th (in a sub 17 minute PB time), Robin Copestick 11th and Sanjai Sharma 16th!  At the Bournemouth Parkrun the same day, Paul Hill reverted to his usual 2nd (to an ‘unknown’ winner – now who could that have been?), Paul Dixon-Box was 4th, Jud Kirk 18th, Steve Cox 25th and Ian White 31st.  Also competing at Bournemouth was Eddie Suthers, category JM 11-14, and this was particularly pleasing, as Eddie is a recruit to the club from the Wednesday Junior Development Evenings.  Will Price also kept up his record of running in just about all the Bournemouth Parkruns.  The Parkrun movement goes from strength to strength, with 703 running at Poole, and 400 at Bournemouth.