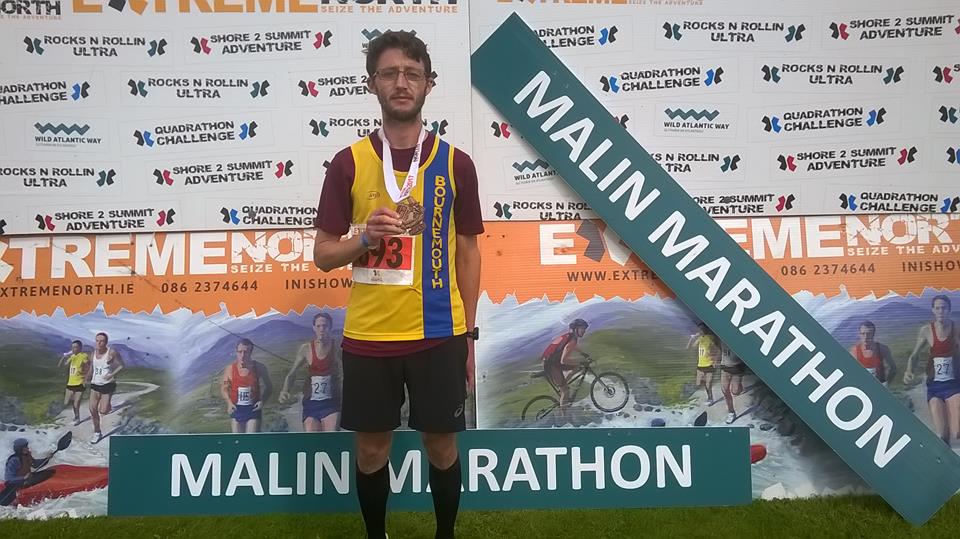 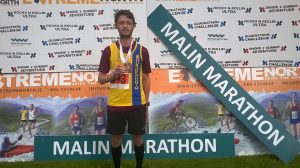 Tom Paskins took on his biggest challenge yet in the Extreme North Quadrathon, with the task of completing four half marathons in four days

The task ahead was a daunting one for Tom Paskins, but it also represented the prospect of an exciting challenge and effectively, a step into the unknown. Tom had made the brave decision to head over to Ireland for the Extreme North Quadrathon.

The Extreme North Quadrathlon is an event in which participants set out to complete four marathons or half marathons in four days, so one each day starting from Thursday 17th August running through to Sunday 20th. This would already be a tough task in itself as marathons and half marathons usually require a fairly extensive training routine just for a one off race. It is made all the more difficult by the rugged landscapes and hilly terrain of the Inishowen 100 where it is set, better known as the Wild Atlantic Way. With each of the first three races containing climbs of 500 to 900ft it was never going to be smooth sailing.

This kind of profile would be enough to put many people off but that was not the case for Tom. Tom seems to relish a good hilly route and was coming off the back of some strong runs in the last couple of Dorset Road Race League races on the undulating roads of Portland. But the prospect of running four half marathons in four days was something entirely knew for Tom and he had no idea how he would cope. There was only one way to find out though.

The route on the first day went past Kinnego Bay, of Spanish Armada fame, before leading onto a tough 1km climb. After that it was 11 miles of scenic coastal roads finishing in the tourist village of Malin.

Tom got off to a fantastic start, winning the race in a superb time of 1:28:36, although he was pushed all the way by Phillip Callaghan, a local runner from Inishowen AC, who finished just 8 seconds behind. The time gaps could prove crucial as the Quadrathon winner would be determined by accumulated time over the four stages. 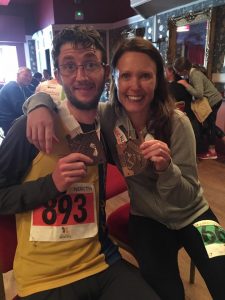 Tom and his friend, Jo Peasland, show off their new bling after completing the first stage in their Quadrathon journeys

The second stage took the runners onto Banba’a Crown, the Ireland’s most northerly point. The main climb of the day was Knockamenny Bends, with an elevation gain of 600ft over a 2 mile stretch. Although the climb wasn’t as steep as those on day one, it was actually the one that Tom found toughest of all the stages since it was such a lengthy period of uphill.

That said though, Tom got the job done again claiming his second victory with a time of 1:29:14. Again Phillip Callaghan pushed him all the way, crossing the line with only a 17 second deficit. This put Tom’s advantage after day 2 at 25 seconds and stage was set for an intriguing battle over the next couple of days. 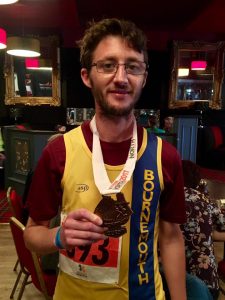 Day three featured the biggest climb of the entire Quadrathon, Mamore Gap. It was a gruelling 800ft climb over 1.2 miles including sharp rises over the first and last increments. Very few runners had previously every managed anything close to resembling running in this sector. Tom had to really dig deep on this one but amazingly he found the resolve to run up it all way. 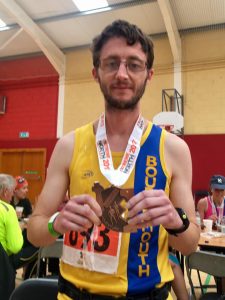 It was on this stage that Tom managed to open up a small gap over Phillip Callaghan and crossed the line first once again, in a time of 1:32:55. Phillip came in 1 minute 15 seconds later. Going into the final day, Tom now had an advantage of 1 minute 40 seconds but he knew it was all to play for on that last race. 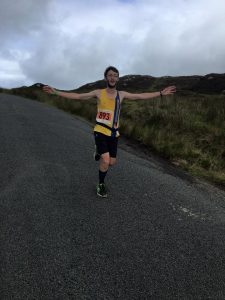 Thankfully for most of the runners after the previous three day’s exploits, the final stage was a flat route, going from Grainne’s Gap to Redcastle. With such a slender margin between them, Tom knew he couldn’t afford to give Phillip an inch. The pair were slugging it out all the way along the main road from Muff to Redcastle.

Once again, Tom had to dig deep into the reserves but he was not prepared to surrender his time gap on the final day, after all the toil of the previous three stages. It was clear that they both wanted it badly and the spectators enjoyed watching the pair battling it out over the final sector of the race.

In the end, they approached the finish together and a sprint finish ensued. Although Phillip was actually first to the line, Tom actually won the stage by three seconds on chip timing to record his fourth win out of four in a time of 1:25:24 and seal a monumental overall victory. 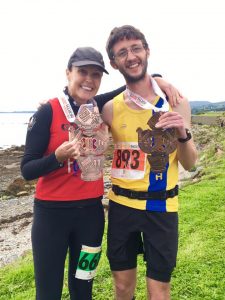 After the fourth a final race, Tom and Jo show off their extremely well earned and heavy duty treasure

Tom’s total accumulated time over the four stages was an incredibly impressive 5:56:09.  He finished up with a winning margin of just over 2 minutes after a valiant effort from runner up Phillip Callaghan. They were the only two to post a total time of under 6 hours.

Naturally, Tom was overjoyed with the result. It had been a completely new challenge for him and he had no idea what to expect going into it. After winning the first race, he had no idea whether he would manage to hold onto his lead throughout the remainder of the event or completely fade. It was a great learning experience for Tom and proved he has the desire and the commitment to really earn his stripes and the endurance and talent to achieve great things. 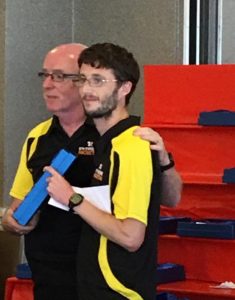 A friend of Tom’s, Jo Peasland, completed the Quadrathon Warrior Challenge, so four marathons in four days. Jo is also a Dorset runner, hailing from Poole and she is on a quest to become a member of the 100 marathon club. The four marathons of the Extreme North event took her up to 76 marathons in total and she is on course to hit her 100 milestone in London next April. Jo received an even more impressive medal for conquering the Warrior Quadrathon than Tom’s, which was still at the larger end of the scale.

Tom’s prize for winning the half marathon version was a trophy in the shape of the Inishowen Penninsula and a 125 Euro voucher for another Extreme North event. Needless to say the Guiness went down well after for Tom as he celebrated a tough but ultimately rewarding four days and more importantly, a truly unique and unforgettable experience.

It couldn’t really have gone much better for Tom as he secured a clean sweep, winning each of the four consecutive half marathons to cap off a very memorable four days