99 and still not flaking out 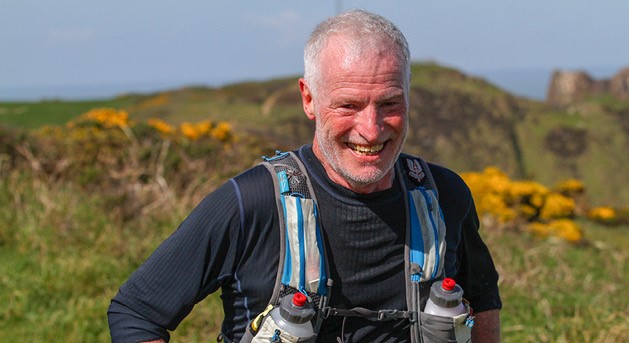 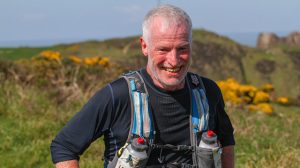 Another three marathons would take Bournemouth AC long distance guru Andy Gillespie up to a total of 99, bringing him to within one of that magic treble digit landmark. The Devon Coast Challenge would present him with an opportunity to get onto the final step toward the promised land. A true achievement for the ages would then be in touching distance. Of course, there was the small matter of completing those three marathons first though and even for the grandmaster himself, that wasn’t going to be an easy task.

The truth is, even though he’s a veteran of these kinds of events, they never get any easier for Andy. If anything, they get tougher and more gruelling as the body advances through the years. One thing that most certainly hasn’t deteriorated though is Andy’s spirit… His unquestionable desire to put himself through the mire and come out smiling at the other end… His willingness to dig deep when times get tough and find the resolve to succeed… His determination not to let anything stand in his way when he steps over that white line. He invariably will get to that finish line, no matter what, whether he’s on a bad day, a good day, fully fit or on one leg. The words “I quit” are simply not in his vocabulary.

Inspired by the Jurassic and Atlantic Coast Challenges, events which Andy is also very familiar with, this was only the second year running for the Devon Coast Challenge. The route kicks off near Hartland Point and finishes in Porlock Bay, 78.6 miles later. Passing through some stunning coastal settings the race takes it’s participants through some famous towns and villages, including Croyde Bay, Lynton and Lynmouth, Ilfracombe, Woolacombe and The Valley of the Rocks.

Last year Andy completed the three marathons in three days in a total combined time of 22 hours 48 minutes and 38 seconds, so that was his target to beat this time round.

The route for Day 1 was from Hartland Quay to Appledore. It was only a week after Andy had run the North Dorset Marathon so there was still some fatigue from that in his legs. He was still looking forward to seeing what the three days would throw at him though and as he always does, he was determined to take it all in his stride.

He’d forgotten just how hilly this marathon was though. It was easily the toughest race out of any of the three day events he does. With over 5,000ft of ascent, the inclines are extremely steep in places.

Reaching the first checkpoint in 2 hours 35 minutes and 45 seconds, Andy was positioned in 48th place at that stage. By the time he got to the second checkpoint though, he’d climbed up the leaderboard to 40th, arriving in a time of 4:22:32. 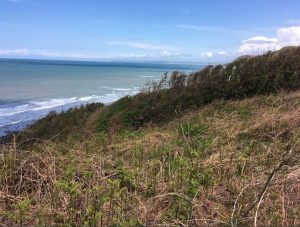 With so much climbing involved, there were always going to be some terrific cliff views to admire

Andy doesn’t mind admitting that he tired in places on this one and really had a to dig in a couple of times. It constant ups and downs all the way through and included rocks, steps and sand. The sheer brutality of this course is something that cannot be underplayed.

After a total of 6 hours and 26 seconds, Andy reached the third checkpoint. He was now in 42nd position. At 19 miles though, he hit the wall and his legs just stopped moving altogether. Fortunately he did manage to get going again though and recovered well for the last four miles, even though the coastal path worked its way round the edge of the golf course and seemed to go on for a while.

Finishing in a time of 7 hours 7 minutes and 19 seconds, Andy crossed the line and was relieved to have made it through. That effort was enough to see him end the first day in 41st place. 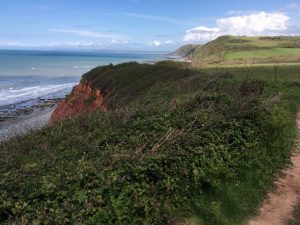 Another view from Day 1 of the Devon Coast Challange

It was around four minutes quicker than he did that stage in last year. Making sure he ate well that night, Andy took on plenty of fuel for the next day’s exertions.

Day 2 seemed flatter but in actual fact it still came with an elevation gain of just under 5,000ft. This one started off with a couple of miles of flat tracks though which were ideal to get you warmed up.

Reaching the first checkpoint in 1 hour 13 minutes and 13 seconds, Andy made a decent start to the day and was in 29th position at that stage. By the second checkpoint he was up to 27th, arriving in a time of 2:25:10. 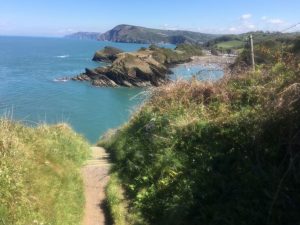 Onto Day 2 and it was again, more breath-taking views to enjoy

Unfortunately though, he was about to make a crucial error that would end up costing him several places. As he came out of Woolacombe there was a newly marked coastal path and the old section was closed.

The new route took Andy over a fairly big hill. He’d followed the acorn signs as instructed by the staff. A number of people had taken the shorter, flatter option of following the closed path though, meaning that, by the time he got to the next checkpoint, Andy was down to 35th place without anyone having actually overtaken him. Needless to say, he was not best pleased. 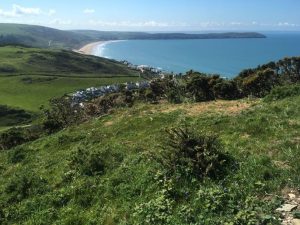 More views from Day 2 of the Devon Coast Challenge

Despite that incident, Andy did manage to claw back a few places before getting to finish, crossing the line in 32nd place in the end with a time of 6 hours 35 minutes. That was an 8 minute improvement of his stage 2 time last year.

He may have mentioned his frustrations to a few people afterwards at the campsite in Combe Martin where they were all staying. They were already enjoying a cup of tea by the time he got back and he knew they hadn’t come past him at any point.

The journey on Day 3 saw Andy and his adversaries make their way from Combe Martin to the final destination of Porlock. It was another tough day on the trails, featuring 6,300ft of climbing. The terrain was very varied under foot as well which added to the challenge.

Of course, on top of this, you also have the exertions of the previous two days in your legs as well. The first two miles of the day saw Andy already getting up to 1,600ft of elevation. That helped get rid of the morning chill. 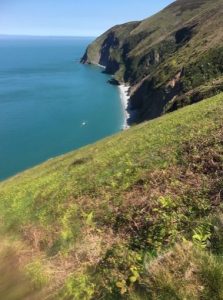 As part of a small team of three, Andy and his two companions took turns to take the lead which worked really well. Andy ran better in the woodland sections and dragged them along and they helped him along over the other sections, in particular the descents.

At the first checkpoint of the day Andy was in 43rd place, arriving in a time of 2 hours 12 minutes and 48 seconds. He was then down to 47th place by the next checkpoint, clocking in at 3:43:11. 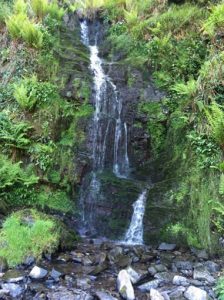 Andy wasn’t going to go chasing waterfalls, he was going to stick to coastal path as he was meant to

At the third checkpoint, he’d climbed up to 41st place, arriving in 5 hours 6 minutes. He then went on to complete the course in 7 hours 30 minutes and 20 seconds, putting him in 38th place for the day. That was significantly quicker than what he did on that stage of last year’s race, where he finished in 8:53:53.

Again, there were people who Andy had been ahead of at the first checkpoint and who had finished up ahead of him, even though they hadn’t come past him. At least he could honestly say that he’d run the full course afterwards though and had met the challenge head on.

With a total combined time of 21 hours 12 minutes and 42 seconds, Andy placed 32nd on the leaderboard in the end. He’d run every stage quicker than he did at last year’s event as well and with an improvement of 1 hour and 36 minutes on his total combined time in 2018, he’d really excelled himself this time round. 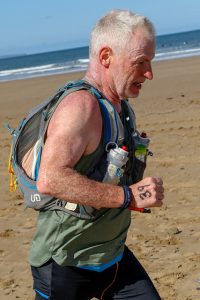 You could argue though that his improvement wasn’t reflected in the results as much as it perhaps should have been though. In fact, he only finished one place higher.

Sadly, there were a couple of people listed above him who perhaps hadn’t been completely truthful about the route they took. That is one problem you get at events like these.

Being quite OCD when it comes to ensuring he has done the full and proper route though, Andy prefers to go too far than to cut the distance short. It just simply isn’t in the spirit that the race was intended. At least that way though, after he’s finished, Andy can look himself in the eye knowing that he’d done what he’d meant to be doing.

By looking at the newly implemented GPS tracking system though, Andy was able to prove that some people had cut it short. He’s hoping the race organisers will take a closer look at that going forward and ensure that every competitor is positioned where he should be.

Enjoying a well earned ice cream at the end of the third and final run, Andy was really pleased with how it went and the event has lifted his running spirits no end. 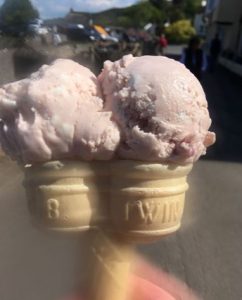 Most importantly though, he’d conquered the Devon Coast Challenge again and completed all three marathons which was one more huge leap toward the magic 100.

His final landmark race will be the 50k ultra at the Salisbury 54321 in August. If anyone from BAC would like to join Andy for that one, they would be most welcome. And he has made assurances that there will definitely be cake at the finish!

One of the things that strikes you most about Andy when you meet him is his humility. He’s always very humble and feels very grateful to be in the position that he’s in and to be able to participate in these amazing events.

He doesn’t moan or complain about how hard they are, or make any kind of song and dance about his achievements afterwards. He just gets on with it, gets it done and then moves onto the next. Hopefully the next one will be different though, as that truly will be a momentous occasion to savour.

Whilst he isn’t what you might a call a fast runner, per se, Andy has still managed to find something in running which he can do that makes other people think “wow” and there’s definitely something to be said for that.

Grateful to his friends from the club who have helped encourage him and push him along at times, Andy says he’s always been made to feel very welcome and is proud to be part of the BAC team, even as a “slow mo”, as he puts it.