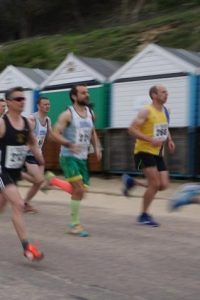 It was a quiet weekend on the race front with many BAC runners preserving their energy for the London Marathon next weekend, or the ABP Southampton. Either that or they were at home with their families tucking into some chocolate. We did, however, have our resident speedster Alex Goulding in action in the Rotary East Cliff Easter Quarter Marathon on Saturday.

Alex stayed true to his excellent recent form finishing second overall and claiming the prize for first vet. Alex’s time of 37 minutes 17 was also a PB for the distance, beating his previous time at the rather hillier Broadstone Quarter.

The race attracted a field of over 300 and was well supported by some of the local clubs, including a large contingent of Littledown Harriers.  Conditions were reasonably good and not too warm as the race set off along the promenade just east of Boscombe Pier heading in the direction of Hengistbury Head. 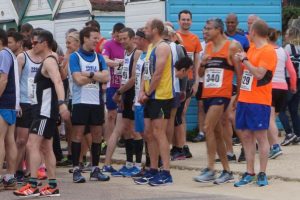 Alex was feeling good for the first couple of miles as the route then turned off the promenade onto the Southbourne Coast Road. There was a point where he could easily have gone the wrong way as one of the martials on The Broadway had temporarily been displaced. This reminded Alex of the importance of always studying the course beforehand, especially if you’re expecting to be at the front of the field as he often is.

Thankfully he stayed on the right track as the route headed back toward Boscombe Pier via the Coast Road and Overcliff. There was a bit of a headwind which, along with a couple of ascents, made it tough and left Alex wondering if he had set off too quickly at the start. He was able to push through it though, buoyed by a surprising amount of people on the side-lines cheering him on.

After heading down The Marina, the race went on to finish just by Urban Reef restaurant. It was a second successive second place for Alex after he was runner up in the Bournemouth Bay 10k two weeks ago.