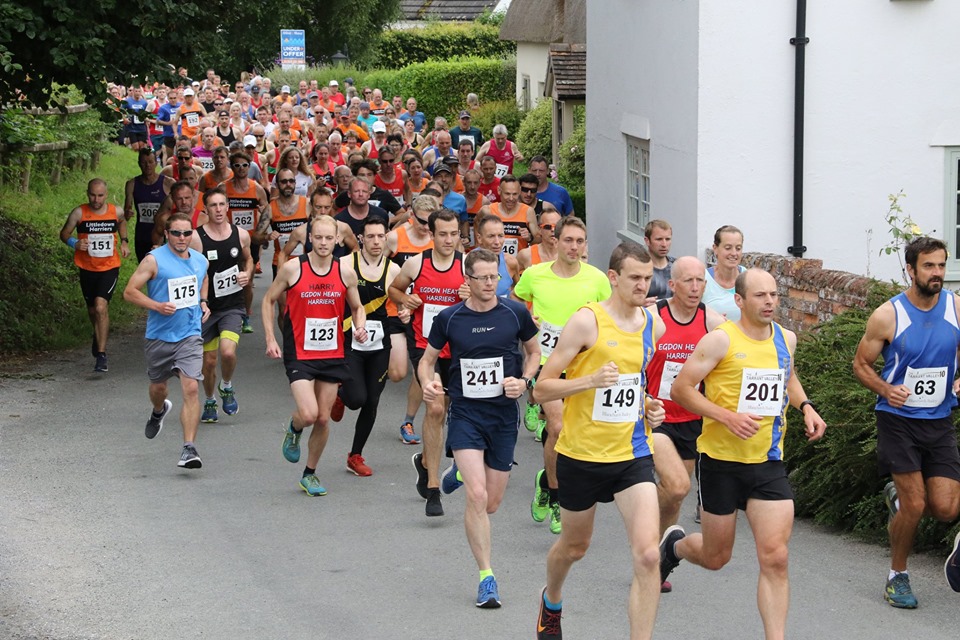 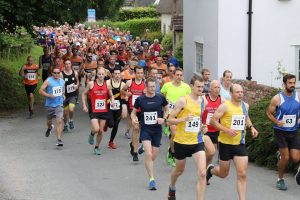 Featuring two of Bournemouth AC’s finest and foolhardiest henchmen in Alex Goulding and Mitch Griffiths, the Tarrant Valley 10 was set to be a thrilling showdown.

The race was staged in the Cranborne Chase Area of Outstanding Natural Beauty in the village of Tarrant Monkton, with the start and finish located just in front of the Langton Arms pub in the heart of the village.

The course was a 10 kilometre, multi-terrain route beginning on tarmac roads, featuring a testing incline up Hogstock Coppice before leading onto well-surfaced bridleways and farm tracks.

Passing through Sing Close, Long Row and Calcott’s Coppices, the half way point mark is reached at Six Cross Ways in Chetterwood. The runners must then pick their way past Strawberry Coppice before heading up a gentle climb to Launceston Wood.

The next part of the course featured some stunning views of the picturesque North Dorset countryside before heading toward an 800 metre descent down Common Drove. Then it was back onto the road for a 600m dart through the village to the finish. 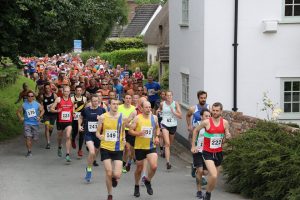 The race gets underway with Mitch and Alex immediately taking to the front, along with Lee Dempster (222)

As he seems to be doing in the vast majority of local races over recent months, Lee Dempster ran out a convincing winner, hurtling round the route in 34 minutes and 40 seconds. That was good enough to see him in with over a two-minute advantage over his nearest rival, who was BAC man Alex Goulding.

Alex was going for gold so he was disappointed not to get the victory but there are signs that he is beginning to return to the formidable form of yesteryear that he displayed on a consistent basis before an Achilles injury forced him out. 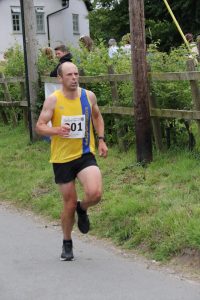 It’s been a long and arduous road for Alex to rediscover his top gear and find the competitive edge to challenge at the front end of the field again. He’s remained focused and determined though and has kept working profusely hard in training and it’s paid off.

It was the last couple of kilometres where Alex really came into his own, taking around five places to get over the line in a time of 36:55. That was a very good result on such an undulating and demanding route and gave Alex 1st prize in the M40 category. 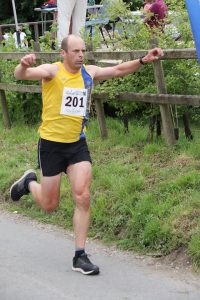 Alex finds time to showboat as he motors toward the line to finish in a time of 36:55

It was Kim Little, not to be confused with the American rapper, singer, songwriter Lil Kim who took 3rd place in 37:06 before Paul Russhard arrived at the finish in 4th, posting a time of 37:15.

Also finding the road to recovery a bumpy ride at times after a spell on the sidelines with Achilles tendinitis, Mitch Griffiths has only recently returned to competitive action and is still very much in the process of working out what he can and can’t do.

He started off with an extremely quick first mile, trying to go with the lead pack, and he would inevitably pay for the price for that later on in the race. 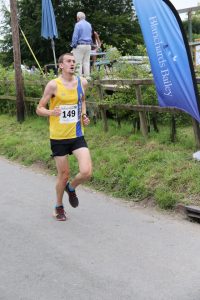 It was around the 5k point when he really ran out of steam and started to struggle. The fourth and fifth miles became very difficult from there and Mitch learnt that his speed endurance isn’t quite where he wants it to be at this point.

Rallying well over the final mile though, Mitch reached the finish in 38:22, putting him in 8th place in the overall standings. That was still a decent time from Mitch on such a testing course but he knows that if he’d got the race strategy right he could have gone quicker. 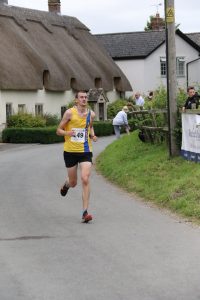 Although he didn’t quite run it as he would have wanted, it was still a decent time from Mitch, all things considered

Again, it’s a work in progress for Mitch though and he understands that it will take a bit of time and a bit more hard work to get back to his brilliant best. It’ll come though. He just has to be patient.

Following in close behind Mitch was a man who regularly trains with the Bournemouth AC Tuesday night crew, Stephen Ross. Stephen is usually up near the front of the pack in the intervals along the seafront and his uniquely smooth, gliding style is the envy of many.

He completed the course in 38:25, just three seconds behind Mitch, to take 9th position. 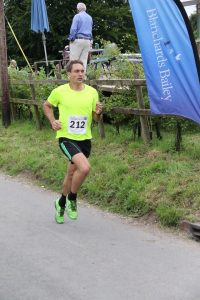 In the women’s race it was Paul Russhard’s wife Gemma who ran out the winner, arriving at the finish in 42:03. That put her comfortably ahead of Lynda Faulkner of Dorset Doddlers who was 2nd lady in 44:57.

After their injury woes it will be a big boost for BAC to have Alex and Mitch back in their ranks and firing on all cylinders for the forthcoming Dorset Road Race League fixtures, with both men down on the list for the Round the Rock 10k on the 11th August. 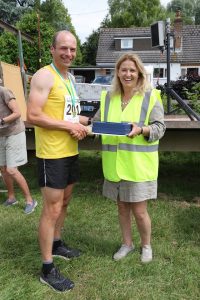