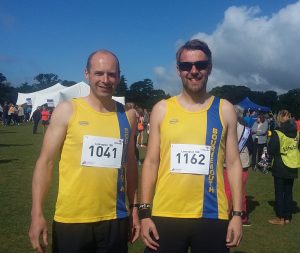 Alex Gould and Pawel Surowiec at the Lymington Lifeboats 10k

Three Bournemouth AC members take to the start line for the Lymington Lifeboat 10K on Sunday (14th May). Alex Goulding, Pawel Surowiec and Steve Parsons were amongst a field of over a thousand people sampling the predominantly flat, multi-terrain course.

The beautiful sunshine was complemented well by the stunning scenery as the course meanders along the top of the sea defences with views stretching all the way to the unmistakable landscape of the Isle of Wight. Starting off on grass, the track then turned to tarmac before hitting the well-trodden, compressed gravel of the ramparts. The gravel path continued for the majority of the run, before returning to tarmac and grass in the lead up to the finish.

There was a bit of a headwind to start off with but that was then behind them as the course changed direction. Pawel found the first 5k easy going but had to really start putting in the work in the second half of the race in order to maintain pace. The last kilometre was a real challenge for him and he summed it up well by describing it as a mixture of joy, excitement and complete exhaustion, followed by massive relief as he dragged his worn out body across the finish line.

Running on the shingle is a bit of a slog and Alex found it particularly tough after 7k when he felt he was struggling from fatigue. It was at this point he thought of Pete Thompson’s marathon spectacular, thinking to himself if Pete has managed to successfully complete 44 marathons in 44 days, surely he should be able to finish 10k without breaking down.  Thankfully that thought kept him going, along with the great support along the way. The community really seemed to pull together well to offer encouragement to the participants throughout the race. 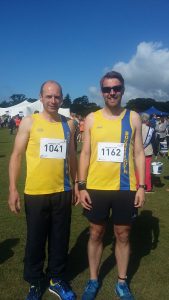 Alex and Pawel both impress on the tricky, multi-terrain course topping off a great weekend of running for the pair

Neither Alex or Pawel had allowed themselves the luxury of resting the day before as both had been out chasing personal bests at Bournemouth Parkrun.  Pawel was celebrating his 100th parkrun and was looking to break 20 minutes for the first time on the course, whilst Alex was striving for a sub 17 minute finish.  Unfortunately, they both narrowly missed out on their targets. However, Alex was first finisher and did still manage to knock 5 seconds off his previous best with a terrific time of 17:05.

Despite that though, they both still managed strong performances at Lymington. Alex ended up taking 7th place with a super speedy time of 35 minutes 40 seconds. This was an improvement of 90 seconds on his time the previous year.  It was Pawel’s first attempt at the course and he came away with a very creditable time of 42:19, putting him 87th in the standings.

Steve Parsons had a slightly different motive as he paced his wife Roz round on her first ever 10k race. Roz had done the distance before in training but managed a quicker time than ever before in her race debut, with Steve’s assistance. The pair crossed the line together in a time of 1:06:52. It was quite a family affair for Steve as his children, aged 5, 6 and 8, took part in the 1k fun run. 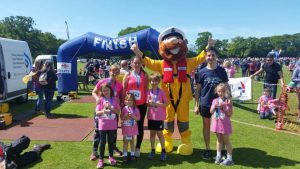