Ant Clark and Sanjai make the most at Manchester Marathon

With the London Marathon scheduled for October again this year, runners wanting to yield a Spring marathon were left looking for alternatives. The closest to it in terms of scale was probably the Manchester Marathon so for many that seemed like the natural choice.

That was certainly the case for Bournemouth AC pair Anthony Clark and Sanjai Sharma anyway and they were both on the start line for the race, hoping to put in a performance to justify all the hard training they’d put in.

Putting in some extremely high mileage since the turn of the year, Ant had gone over the 90 mile per week mark several times and had even been above 100 miles for one of the weeks so his base fitness was definitely there.

It hadn’t been the perfect build up though by any means and he ended up missing out on two out of the three races he’d signed up for in the lead up to Manchester. The first was the Blackmore Vale Half Marathon, were illness prevented him from getting to the start line.

The second one was the Bournemouth 10, which is organised by Ian White and the team from Bournemouth AC. They were unfortunately forced to cancel that race in the end due to stormy conditions, which must have felt like groundhog day for Ian and co after so many postponements.

That left the Surrey Half Marathon as his final opportunity to get a race in before Manchester. Luckily this time he did make it onto the start line and the race did happen so Ant could finally find out where he was at. And the answer was, in a good place, as he recorded a new half marathon PB of 1:12:27, chipping four seconds off his time set at Fleet in 2019.

Sanjai wasn’t really sure what to expect but his training had gone reasonably well up until the last four weeks when other commitments had prevented him from maintaining what he’d wanted to do.

He had managed to get a couple of decent half marathon races in though, completing the Wokingham Half Marathon in 1:30:45 and then going on to record an excellent sub 1:30 at the Paddock Wood Half Marathon, getting round in 1:29:06.

The weekend before Manchester he was in Milton Keynes with the Bournemouth AC team who were competing in the South of England 12 Stage Road Relays where he ran the second leg, which was 5K in distance.

The Manchester Marathon provided its usual eclectic mix of razzmatazz along the way, with various bands and musicians on hand, along with cheerleaders and numerous cheer points for charities and other groups. They combined to generate a fantastic atmosphere and provided a welcome distraction for the competitors as they made their way round.

Ant made the the trip up to Manchester with several of his running buddies including Jez Bragg, Steven Yates and Damian Huntingford. Steve Cook was there with them as well but he was sadly unable to run due to injury.

Making a very promising start, Ant was hitting around 5:30 pace for the first 10 miles and was still under 5:40 pace up until mile 15. For the next eight miles he was going at just over 5:40 pace which left him with only four and a bit miles left to see it out. 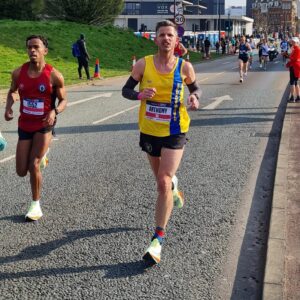 For the following few miles he was still able to maintain a pace of around 5:50 minutes per mile taking him up to mile 26. It was then just a case of grinding that final full mile out, which he did, still keeping under 6 minute mile pace before completing the last third of a mile.

It had turned out to be another epic marathon from Ant and his time of 2 hours 28 minutes and 34 seconds put him in 32nd place out of the elite division. He was pleased with that since he was primarily aiming for a sub 2:30 time and it was also his fastest Manchester Marathon and second fastest marathon time to date. In fact, it was only a minute off the PB he set at London in October. 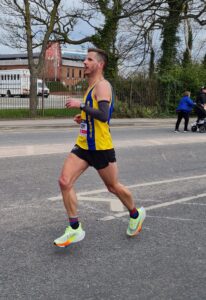 Sanjai was hoping to get under 3 hours 15 minutes to ensure a Good For Age place at London in 2023. The conditions on the day were pretty good for running and Sanjai felt comfortable going at his set target pace in the early stages of the race.

It was at the 18 mile point where he really started to feel it and found himself having to work significantly harder. He did slow down after that but not massively until the final mile. 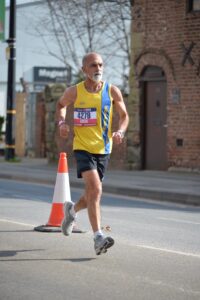 It was all going smoothly for Sanjai for the first 18 miles, then he had to start digging in

Completing the course in 3 hours 9 minutes and 50 seconds, Sanjai finishing in 1,852nd place out of 14,184 participants. In the MV60 category he was 10th out of 191. Above all though, he’d secured his Good For Age time for the London and that will take the pressure off him for the London Marathon that’s in October this year.

Showing scintillating form going into the race, Steven Yates delivered on that promise with a fine display to record a time of 2:27:54. That put him in 19th place out of the masses and 4th in the MV40 category.

Also backing up his excellent form of late, former BAC man Jez Bragg bagged himself a new marathon PB of 2:37:17. That put him in 136th place overall and he was 32nd in the MV40 category out of 1,594.

Bridport man Ben Renshaw clocked a cracking time of 2:36:10 to take 115th place overall and that made him 25th fastest MV40.

Poole AC’s Tom Austin was also lining up with Ant Clark amongst the elites and he had a brilliant to run to clock a time of 2:24:49 to make him 29th quickest. 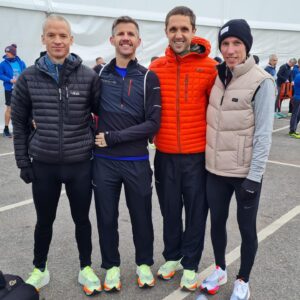 Johnny Mellor of Liverpool Harriers was the fastest man in the field on the day though, blasting round the course in a tremendous time of 2 hours 10 minutes and 46 seconds.

Becky Briggs of City of Hull was first female, crossing the line in 2:29:04, with Naomi Mitchell of Reading next to conclude her race in 2:30:54. Georgina Schwiening of Cambridge Runners was third female, registering a time of 2:31:35.

Next up for Ant Clark will be the Comrades Marathon in August, a race in which he has unfinished business. Illness forced him out of the race last time he was in South Africa for the 55 miler so he will be hoping to realise his potential this time round and lay that ghost to rest.

Before he starts training for that though, he’ll be having a very well earned month off and taking the chance to enjoy a break with the family, a bit of skiing and hopefully a bit of rest as well.