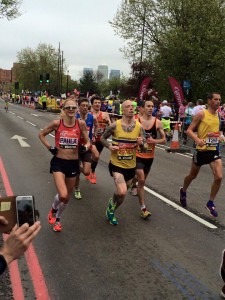 The story of BAC in the London Marathon this year is one, generally, of PBs, and targets achieved, as 14 of our athletes competed in almost perfect conditions, without the forecast rain, or the hot sun which all of us have enjoyed for the last few days, which would not have been welcome on Sunday.  The BAC squad was led to the finish by Anthony Clark who ran a superb, intelligent race to a PB by some 4 minutes of 2.30.06.  Something like 38,000 finished this year’s marathon, which emphasises the quality of Anthony’s run, considering that he was 53rd of his 18-39 category. His pacing was spot on passing half way, as he did, at 1.14.53.  Anthony finished hand-in-hand with Spiderman, aka Paul Martelletti, winner of the recent Manchester Marathon, and currently ranked number 2 of GB‘s marathon runners.  Then came Steve Way, who had kept very quiet that he was running at all!  Steve was testing out his recovery from injury, and swopped his elite start for the championship start, planning to run 6 minute miles, which he did, with a time of 2.35.38, 18th in the 40-44 category.  Steve‘s target is now the Edinburgh Marathon, later this year, and, at long last, things are looking up for him.  Then came Graeme Miller, demolishing his PB by over 4 minutes, to finish in 2.38.52, 45th 40-44.  This was nothing less than Graeme deserved, after very focussed training, including leading the Tuesday night marathon sessions.  Toby Chapman was next, in 2.42.22.  Toby confessed, the previous day, that his training hadn’t really been up to the mark, with something like five weeks with hardly any running at all – so a time anyone would be proud of,  and way beyond the capacity of many of us, is surely something of an achievement!  5th BAC was Simon Way, who more than reached his target of a PB – by almost 4 minutes!  Simon, who was 35th 45-49, ran a strong and superbly paced race, finishing in 2.43.23, having passed half-way at 1.21.26.  The next over the line was Manol Dimitrov, in 2.45.39.  Manol‘s PB is considerably faster than this, and it may be the London Marathon wasn’t a specific target race for him.  But Billy McGreevy clearly was targetting this race, as his time of 2.52.50 was yet another of the BAC PBs of the day, again a well-paced run, with a half-way point time of 1.25.29. Paul Chapman, after some excellent training throughout the winter, was unlucky enough to sustain an injury only two days before the marathon, sufficiently severe to cause doubt about starting even the day before.  Paul decided, however, that he would start, and see how things went, pulling out if continuing would aggravate the injury.  So, it says a great deal for Paul‘s stamina that, no only did he finish, but he did so in 2.53.52, knocking 4 minutes off his PB in the process! Yet another PB was achieved by Sanjai Sharma, finishing in 2.55.22. There must be something about BAC training, as Sanjai, like so many others, ran a perfectly paced marathon, going through half-way, as he did, in 1.28.13 – quality marathon running!  And yet another PB to report is that of Nikki Sandell, and what a PB – Nikki‘s time of 3.01.42 knocked over 12 minutes off her previous marathon best, and this despite a knee injury which has been causing trouble and threatened throughout!  Such strength of character is an example to us all.  Richard Nelson seems to run just about every marathon going, and there he was pounding the streets of London.  Richard finished in 3.08.12, just some 3 minutes or so off his PB, so Richard‘s satisfaction with his run is surely justified.  Caroline Rowley was BAC‘s second lady to cross the line in this, the middle of three marathons Caroline is running in the space of two weeks.  Less than a week earlier, Caroline ran 3.33.27 in the Boston Marathon, so her time of 3.32.33 must have been very pleasing for her, and shows how sensibly she is approaching this amazing challenge (for charity). Caroline has one marathon to go, the North Dorset Village Marathon this Sunday, so we wish her every success in that. Something must have gone wrong with Andy Gillespie‘s run.  Andy is very familiar with distance running – in fact a relatively flat road race at marathon distance might appear easy (though we know it isn’t!) against the type of challenge Andy regularly takes on, such as three coastal marathons (up-and-down!) in three days, so Andy‘s time of 3.49.13 indicates there may have been a problem, particularly as his splits show he slowed fairly dramatically in the later stages of the race. Hopefully, if there is a problem, it’ll sort itself out before Andy‘s next challenge, which no doubt isn’t far away!  Last, but certainly not least, was Peter Gaze, well over 70 years of age, and still running a number of marathons each year. Surely any of us would be happy to be running marathons in 5.49.13 (indeed be running them at all!) at Peter‘s age.

For those of us watching the London Marathon, it was great to see so many BAC vests passing by, and giving whatever encouragement we could, so congratulations and well done to all our athletes taking part in this unique event. 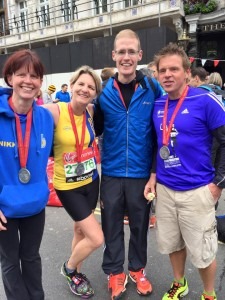 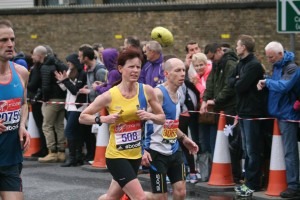 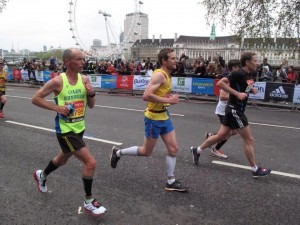 Paul Chapman in the finishing straight 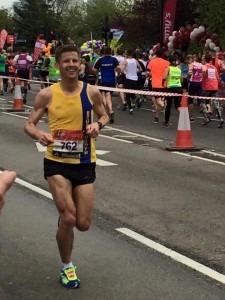 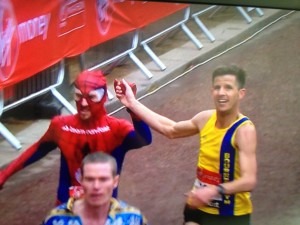 ………and finishing with Spiderman (Paul Martelletti) 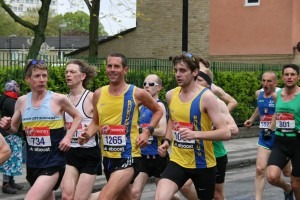 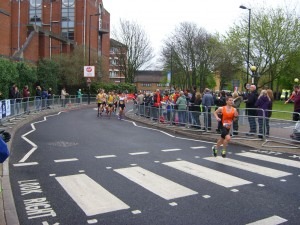 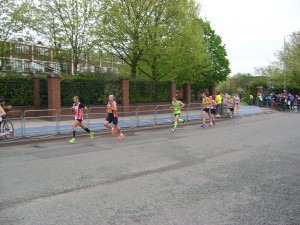 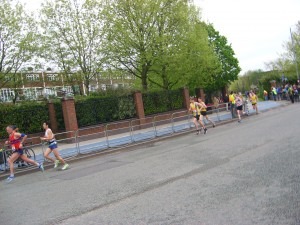 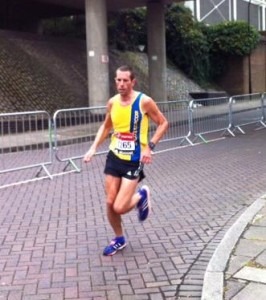 Steve Way seems to be on his own 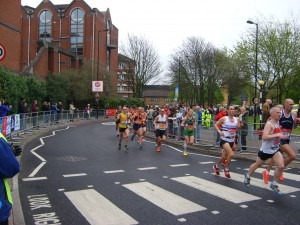 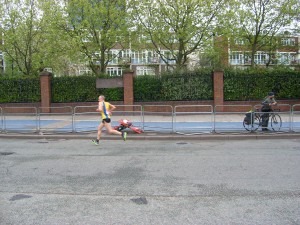 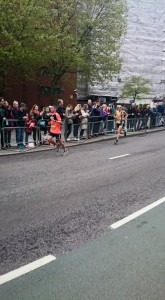 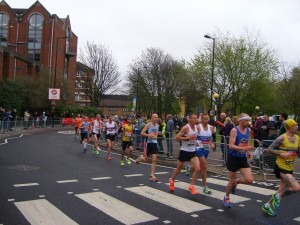 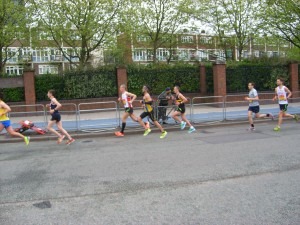 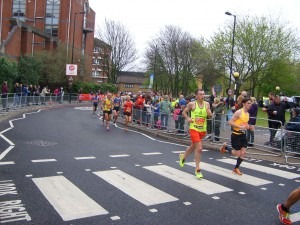 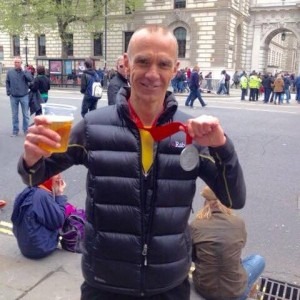 ……………and celebrating his PB