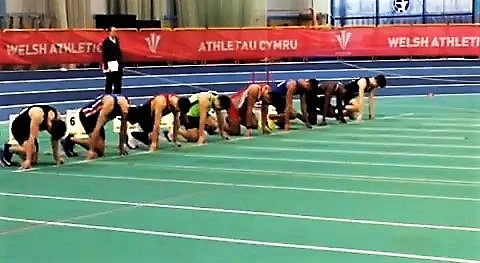 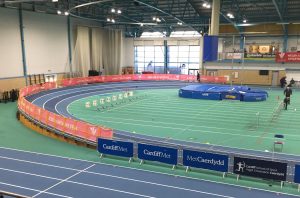 BAC’s Janet Dickinson and James Lelliott showed great form with their inspirational performances. A promising start to the year both indoor and for the coming outdoor track and field season. James ran 6.94s in the 60m heat, placing 2nd in a competitive field. He went on to win the final in 6.83s, PB by .09s, even beating the U20 and U23 age groupers. 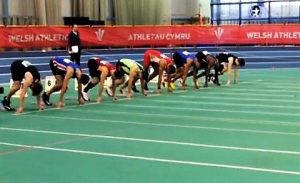 James Lelliott (in yellow) ready to explode from the block in the 60m sprint.

James also triumphed in the long jump with 7.28m, an SB of 1cm and a convincing lead margin of 86cm! He jumped strongly and consistently throughout the event. 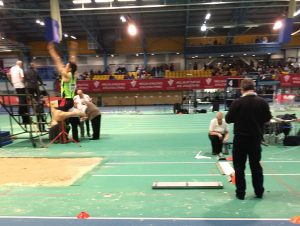 A great day for James especially as his main goal was to grab the opportunity to compete and get an idea of his current form after the last training cycle. His main focus is to target the outdoor season and we’re looking forward more great performances and likely some PBs.

Janet Dickinson performed well as she focused on shaking off the winter cobwebs in preparation for the British Masters next month. Janet competed in five events and started extremely well with a 60m PB, 8.82s and another PB in the Long Jump, 4.67m Indoor, a mere 19cm under the British record set in 2000! Janet’s High Jump was 1.35m and 200m, 29.46s on the inside lane which could be tough! Another PB in 400m, 67.96s Indoor. The Shot Put clashed with the High Jump (not literally!) so it was impossible to do both.
An excellent performance all round especially considering it’s Janet’s first time racing on an indoor track. 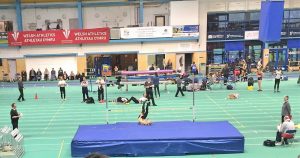 Our outstanding athletes Janet and James will hopefully provide some inspiration for BAC’s current and future track and field athletes.
Janet and James intend to compete at the Indoor British Champs on 10-11 March at Lee Valley. We hope to see some other BAC athletes competing and will be looking forward to the results. If you are interesting in competing at any British Masters event, go to http://bmaf.org.uk/fixtures/