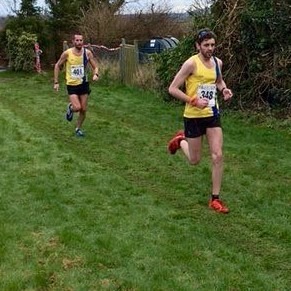 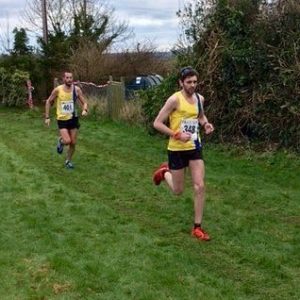 Bournemouth AC brought the big guns out for the 2nd Dorset Road Race League fixture of the season, the Blackmore Vale Half Marathon, which takes place on the undulating country roads of Bishop’s Caundle.

It is a race that has proved popular with some of the top BAC members over the years and this year was no exception, with a very strong side assembled to tackle the splendidly scenic and inherently challenging course.

BAC has something of an illustrious history at Blackmore Vale with Steve Way having won the race on 7 previous occasions, including last year, where he fended off competition from Iain Trickett of Dorset Doddlers.

The year before that Steve had to pull out after a few miles with a stomach upset but his BAC teammate Toby Chapman swooped in to seal the victory, with Jon Sharkey, also of BAC in a close 2nd.

This year’s edition looked promising for BAC, with Steve, Toby, Ant Clark and Jez Bragg all lined up on the front row ready to lead the charge.

As the race got underway, Steve hit the front for around the first 800m before Toby assumed pole position. Toby was feeling in tip-top condition and was soon exhibiting a pace that not many of his contemporaries could live with. In fact, as it turned out, the only one strong enough to stay with Toby was Steve himself.

After suffering from a cold at the beginning of the year, Steve has struggled to find his best form of late, putting in some indifferent performances in cross country races by his own very high standards.

This time though, Steve was determined to lay those demons to rest and bestow a refined performance. A more ‘Steve Way’ like display, if you will.

Doing his best to hang onto Toby’s coattails, Steve managed to maintain a very small gap between himself and Toby. After the first few miles, there was a point where Steve considered letting Toby go, but he was conscious that if he did allow Toby to get away, he could easily lose motivation and start to fall back down the field.

Having one of his best races for a long time, Toby was absolutely flying and Steve did really well to keep that short gap between the two of them for the remainder of the race.

As the pair reached the finish line, there was only a second between them, with Toby taking the win in a terrific time of 1 hour 14 minutes and 21 seconds. Steve was 2nd in 1:14:22. 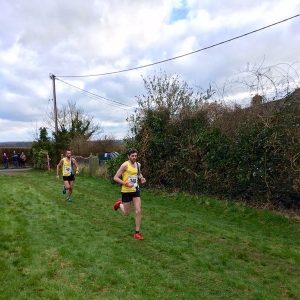 Next came the Bournemouth AC duo of Ant and Jez, who were actually doing the race as part of a much longer run that would see the pair of them run back home from Bishop’s Caundle after completing the half marathon in a round trip that would take them up to 35 miles each.

Despite knowing they had a much longer run ahead of them once they had completed the race, Ant and Jez still performed extremely well, with Ant taking 6th place in a time of 1:17:59 and Jez securing 7th in 1:18:36.

When they eventually got home, Ant and Jez were more than ready for their Sunday dinners after what would have to go down as a fantastic day’s training. 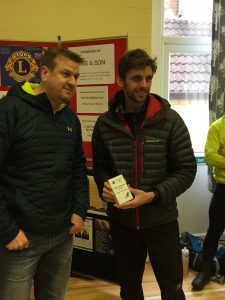 For Ant, it will be his 3rd consecutive year at the Anglo Celtic Plate, finishing in 2nd place last year. No doubt they’ll both be doing a few more of these extended training runs in the weeks to come no doubt.

Of course, in the Dorset Road Race League it is the top 5 that score points for the men’s team and the next BAC man over line to complete the scoring team was Pat Robbins, who had an incredible run, finishing in 13th place out of a field of 395.

Pleasantly surprised with his time of 1:22:11, it was a promising sign for Pat, who has been selected to represent Great Britain in the 24 Hour European Championships at Timisoara in Romania on 26th-27th May. 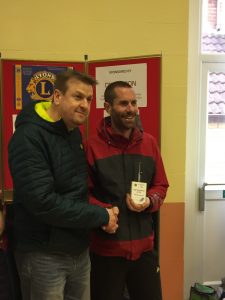 This could even be a breakthrough performance for Pat at a time when he hasn’t quite been running at his absolute peak, perhaps due in part to an ongoing plantar fasciitis issue. He has still had a pretty solid season in the Hampshire League Cross Country, regularly scoring points for BAC and contributing to a fantastic campaign for the club thus far.

The ladies race was won by Vicki Ingham of Poole Runners, who finished in 57th place overall in a time 1:29:53. Clare Martin of Purbeck Runners was hot on her heels finishing immediately behind Vicki in 58th with a time of 1:30:15.

It was the performance of Bournemouth AC’s Gemma Bragg though that really caught the eye. It was Gemma’s first race since the birth of her baby son back in October and she did not disappoint.

Finishing in a superb time of 1:35:57, Gemma was 3rd female over the line, marking a tremendously successful comeback. It was clear that her BAC teammates were pleased to see her back, particularly the ladies, who will be hoping she’ll be able to make it to some of the other DRRL fixtures. 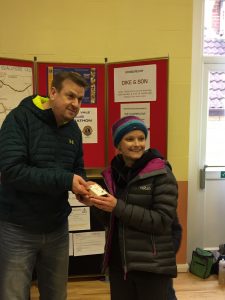 Another BAC lady who had a race to remember was Tamzin Petersen. Despite the hilly profile of the course and the challenging crosswinds over some of the more open stretches of the route, Tamzin somehow managed to bag herself a new half marathon PB, finishing in a phenomenal time of 1:46:28.

Recently Tamzin has tried to incorporate more hills into her long training runs in preparation for Blackmore Vale and it certainly seemed to pay dividends. Her time was 26 seconds quicker than her previous best of 1:46:54 which was set at the Indian Queens Half Marathon in Cornwall. Tamzin was 25th female over the line and came 178th overall.

The ladies team had been dealt a blow in the lead up to the race when Yvonne Tibble pulled out through injury. Yvonne normally does very well in the league races and was a consistent points scorer last season, ending the year as 3rd placed lady in the individual standings.

This meant the other ladies who were racing at Blackmore Vale would have to step up to the plate in her absence. The other two BAC representatives, Louise Price and Estelle Slatford ran a lot of the race together.

Incidentally, Blackmore Vale is actually one of Louise’s favourite races and she did actually set her PB of 1:42:59 on that course. Whilst she is still some way off that kind of form, Louise is getting her fitness back after spending almost the full year on the side-lines in 2017.

In spite of the big hill on the 5th mile that put her off a bit, Estelle thoroughly enjoyed the course. It wasn’t a PB for her but it was quicker than she ran in her last half marathon which was at the Bournemouth Marathon Festival.

This year Estelle is running the London Marathon, having been the lucky recipient of a place through the club ballot. She has just recently started on her 16 week training programme to prepare for the big day.

There were several other notable performances from BAC men at Blackmore Vale. Tom Paskins showed he’s finding some form again, finishing in 19th place in a very good time of exactly 1 hour and 25 minutes.

It was 1 and a half minutes off the time he did at Blackmore Vale last year, but Tom was coming off the back of a very heavy week’s training, having also recently started his London Marathon programme.

One very consistent performer in the ranks at BAC is Laszlo Toth. Laszlo took it quite steady at the start of the race but soon got into his stride, overtaking his BAC teammate Richard Brawn after the first few miles.

From that point on, Lazslo ran a very strong race, managing to maintain the pace well despite the constant undulation. He reached the finish line in 23rd place, clocking a very impressive time of 1:25:37.

The next BAC member over the line was Richard who took 46th place with a solid time of 1:28:42. Rich hadn’t put himself to the test on many hilly half marathons previously so he wasn’t really sure how it was going to go. He felt fairly strong throughout the race and was ultimately pleased with the outcome. 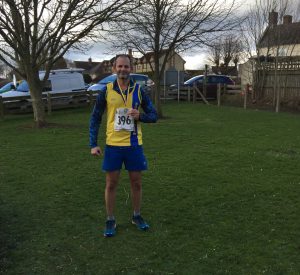 With a strategy of trying to keep to under 7 minute miling, Jud Kirk was on course to achieve that as he reached the half way point. Unfortunately he had very little left in the legs for the second half of the race and slipped off the pace a bit.

At the end of the race he was completely shot, having given everything up those last few energy sapping hills. Jud finished up in 73rd place with a time of 1:34:09.

During the latter stages of the race, Jud was thinking about his category in the Dorset Road Race League and was pleased to finish ahead of one of his rivals, John Cook, of Egdon Heath Harriers. Last season Jud finished 2nd in the 55-59 category in the DRRL but this year he will be moving up to the 60-64 category.

Jud was the 5th man over the age of 55 to complete the race and after crossing the line, he was so exhausted that he could barely make it to his car.

This coming weekend, Jud will be in action again at the Lychett 10. Following his half marathon exploits, he said he is very glad that Lychett is only a 10 miler.

The final BAC male to arrive at the finish line was Mark Westcott, who came in 214th place in a time of 1:50:30. This was only Mark’s second ever competitive half marathon and the first was back in 1984!

Over the last few years, Mark’s main focus has been cycling, but recently he’s really starting to enjoy his running and is happy with the way it’s going. His time at Blackmore Vale was 2 minutes quicker than the 13 mile training run he’d done with BAC the weekend before.

Mark and his partner Helen Ambrosen, who also runs for BAC, have already signed up for the Oakhaven Half Marathon, which takes place at the New Forest in March. Mark will be looking to see if he can improve on his half marathon time further in that race.  As well as enjoying the race, Mark enjoyed the camaraderie and being part of a team. 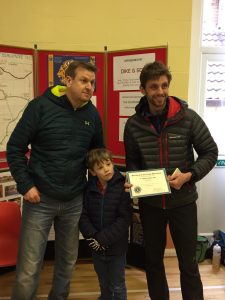 Toby is given his certificate for 1st male under 40 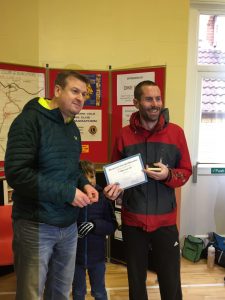 Steve took the certificate for 1st male over 40

In the Dorset Road Race League, the top 5 of Toby, Steve, Ant, Jez and Pat easily won the men’s team competition, marking an excellent day all round for BAC. In fact, you could even say, it was just like the good old days. 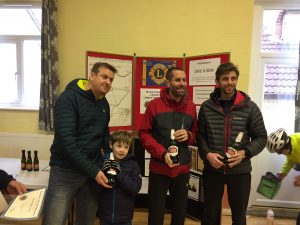 As the winning men’s team retrieved their beers, Ant Clark had already set off on his mammoth run home, meaning a lookalike had to be drafted in. Unfortunately this small boy was the only one available at such short notice!