BAC contingent limber up for Lytchett 10 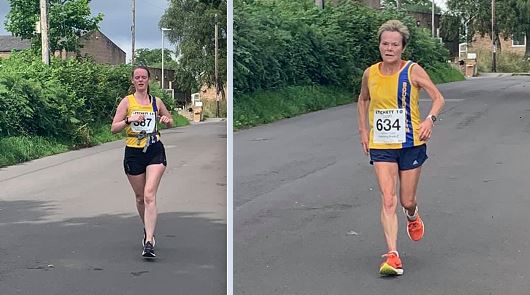 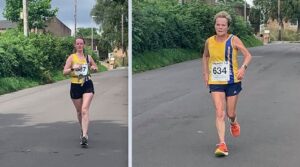 There were five Bournemouth AC members present at the 2021 Lytchett 10 which was finally able to go ahead in August, including Katrina White (left) and Helen Ambrosen (right)

When the Lytchett 10 mile road race came round most of runners who were on the entry list had forgotten all about it. The event had been cancelled and postponed so many times due to the Covid-19 pandemic and whatnot it seemed like it was never going to take place.

The race is usually staged in February and is part of the Imperial Series, along with the Bournemouth 10 and the Larmer 10. The first time it was postponed it was due to adverse weather conditions. A storm had hit the south that weekend and the course was deemed unsafe.

Of course the club who put the event on, Lytchett Manor Striders, had no idea then that it would take until August 2021 for the race to finally go ahead. But here it was, taking place in the summer months which brought a welcome change in outlook in comparison to the usual cold climate of a February date.

This time it was bright day and not too windy either. Practically perfect running conditions. Ideal for those in good form to take advantage and record a fast time.

It often ends up being treated as a marathon training run for some of the field, with runners often opting to go round the course an extra time before the race has even started, giving them a very good 20 mile training run.

With the London Marathon being just six weeks away, that was again the case here, with many of the more serious marathon runners getting up and out early to get the loop done once before the actual race kicked off.

None of the Bournemouth AC members who were in action that day took that option though. They all decided once was enough for them on this occasion.

That included Rich Brawn, who is competing at London. He’d done a lot of long training runs recently though so was looking for a slightly faster paced run. Therefore he figured racing the 10 miles hard might be a better option.

Unfortunately he’d pulled a muscle in his back though in the week leading up to the race and it had been causing him a lot of pain. Even the day before the race he was considering pulling out but he thought it would be better to go along and at least try to run and see what happened.

He was joined in the race by Jacek Cieluszecki, who had won the Lytchett 10 a couple of times before. That was in 2017 and 2011. He’d also had a number of other top three finishes in the race dating back to 2009.

After running the Scafell Pike Trail Marathon the weekend before though, JC wasn’t expecting to be in full swing at Lytchett but he was keen to give it a go anyway.

In comparison to the 1800 metres of vertical he faced at Scafell Pike though, including climbing England’s highest peak, the slopes of Lytchett weren’t likely to prove too taxing for him. But with very little speed-work in his current training regimes, tapping back into that faster gear could still prove tricky.

Even though he claims to have retired from the running scene, Steve Way still always comes out to support his local race and he managed to dust off his old BAC vest for a rare outing.

Although he hadn’t been doing much outdoor running, Steve had been training hard on the bike using Zwift so that would have helped keep his fitness at a reasonable level.

He’d been suffering from a hamstring injury though so was going to have to hope that held up alright on the unforgiving tarmac. 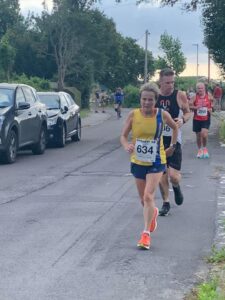 Also in action for BAC at the Lytchett 10 was Helen Ambrosen. She’d been participating in the British Masters Athletics Federation Championships and the Lytchett 10 was a designated race for that competition which meant extra age group medals were up for grabs for her.

Fresh off the back of an excellent Summer Series campaign, Katrina White was also competing at Lytchett for the yellow and blues. She finished 5th in her age group at the Summer Series and for the most part, manged to get quicker as the competition progressed.

A good 10 mile display at Lytchett would cap off a superb summer for her. Ian White was also there and was marshaling for the event and cheering on the runners as they went by. 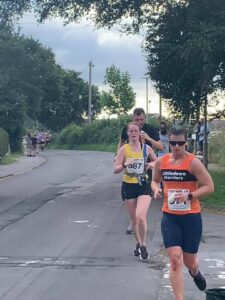 When the race started it kind of took Jacek by surprise. He was with his wife Ela who was also taking part and they were right at the back of the pack. That meant JC had to then work his way up toward the front of the field.

Due to the back issue he’d been having, Rich Brawn made a tentative start. At first he thought it would be too painful to go the whole way but he stuck it out and tried to manage as best he could.

It wasn’t long before JC caught Rich up and at the time he was close to Steve Way as well. Steve had bumped into an old friend in Holly Rush, who runs for Avon Valley Harriers, and they were running together, with Holly emerging as the front runner in the women’s race. 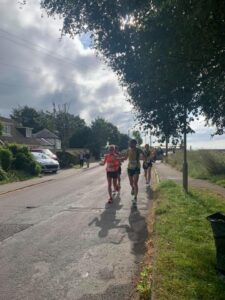 The Lytchett 10 course is mostly uphill for the first 4.5 miles. Then there is a downhill stretch to 5.7 miles before the final climb which leads to just over 7 miles. After that it’s predominantly downhill all the way to the finish.

About half way into the race which started to feel pretty good and the back pain he was suffering from had subsided. He then began to kick on, pulling away from Richard Swindlehurst who he had been running with and setting about in pursuit of Graham Sherwin of Egdon Heath Harriers.

Then after that he went past Matt Risden of Southampton and it was beginning to turn into a half decent run for Rich. He just needed to keep going and keep working hard. 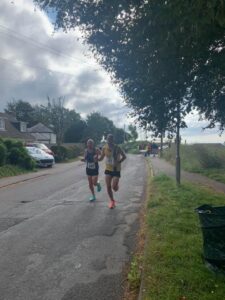 JC had managed to get up to 5th place in the end but he was unable to catch Steven Yates of Twemlow who had already run one lap of the course before the race had started.

The win was taken by Tom Merson of Exmouth Harriers and he managed to get round in a superb time of 53:15. That was enough to see him claim a very convincing win with an advantage of over 3-and-a-half minutes over his nearest rival.

That was Sam Hull of South West Vets and he took the runner up spot in 56:55. Adam Tuck of Ride Harriers sealed 3rd place in 57:44.

Crossing the line for the second time round, Steven Yates showed superb form to clock a time of 57:51. Then it was JC in 5th with a time of 58:18. 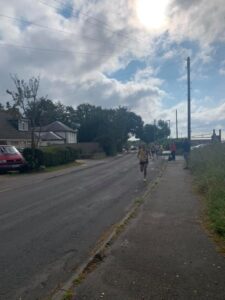 Caught out at the start, Jacek Cieluszecki had to work his way up the field

The second Twemlow man in was Harry Lauste who arrived in 6th place, recording a time of 58:36. Even though he hadn’t been doing a lot of running of late, Jack Galloway made it three Twemlow men in the top ten when he crossed the line in 9th place with a time of 59:14.

Finishing strongly to stay ahead of Matt Risden, Rich Brawn ended the morning in 12th position, posting a time of 1:01:57. It wasn’t as quick as he would have liked but was still a fairly decent run given how his back was at the start and the hilly nature of the route.

Matt Risden followed in after Rich to take 13th place in 1:02:13. Then it was Richard Swindlehurst, completing the team win for Twemlow despite having run a lap of the course beforehand as well. He clocked a time of 1:02:34, with Graham Sherwin taking 15th place in 1:02:43. 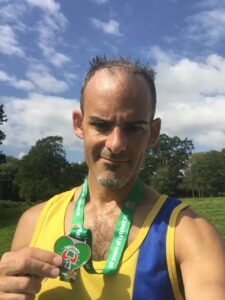 Unfortunately for Steve his hamstring went in the end, leaving him with a rather painful last few miles. That saw him take 18th place in 1:03:27.

Holly Rush had been by his side throughout though and she crossed the line in 1:03:25 to seal the win in the women’s race by a very substantial margin.

The next female to arrive at the finish was Charlotte Bunch of Poole Runners and she completed the course in 1:09:57 to take 40th place overall. Susie Hill was 3rd female and she came in in 44th place overall recording a time of 1:11:11. 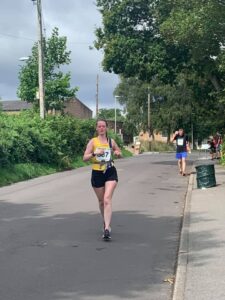 Katrina makes her way down the road looking in fine form

Katrina White had a good run in the end to get over the line in 1:23:57 and that put her in 129th place overall and 23rd fastest female. In the 25-29 category she took 3rd place and it was great to see her produce another successful outing after the high of the Summer Series. 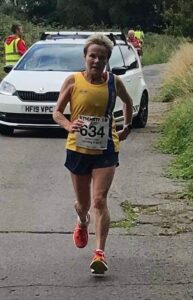 Securing a silver medal in the BMAF 10 Mile Championships for the over 65’s, Helen Ambrosen completed the course in a time of 1:30:07. That put her in 166th place overall in 35th fastest female.

Helen was pleased with how she ran and was over the moon with her silver medal. She’s really enjoying competing in the BMAF Championships and has found that it adds a new dimension to the race knowing that there is also the prize and prestige of that on offer. 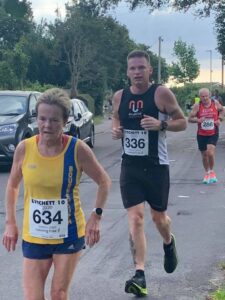 Given he still had heavy legs from his marathon at Scafell Pike, it was a fairly decent performance from Jacek to get round in 58:18. At the moment he’s finding it hard to get the inspiration to go flat out in road races though. He’s much preferring the tough, hilly, trail type races.

The next race he had lined up was the CapTEN which is a 10 mile fell race over in Bridport, incorporating the humongous climb of Golden Cap. Then after that he’ll be heading up to Scotland for the Saloman Mamores VK, which is the 5 kilometre fell race featuring 1000 metres of ascent.