BAC Continue to Impress at the SAL in Woking 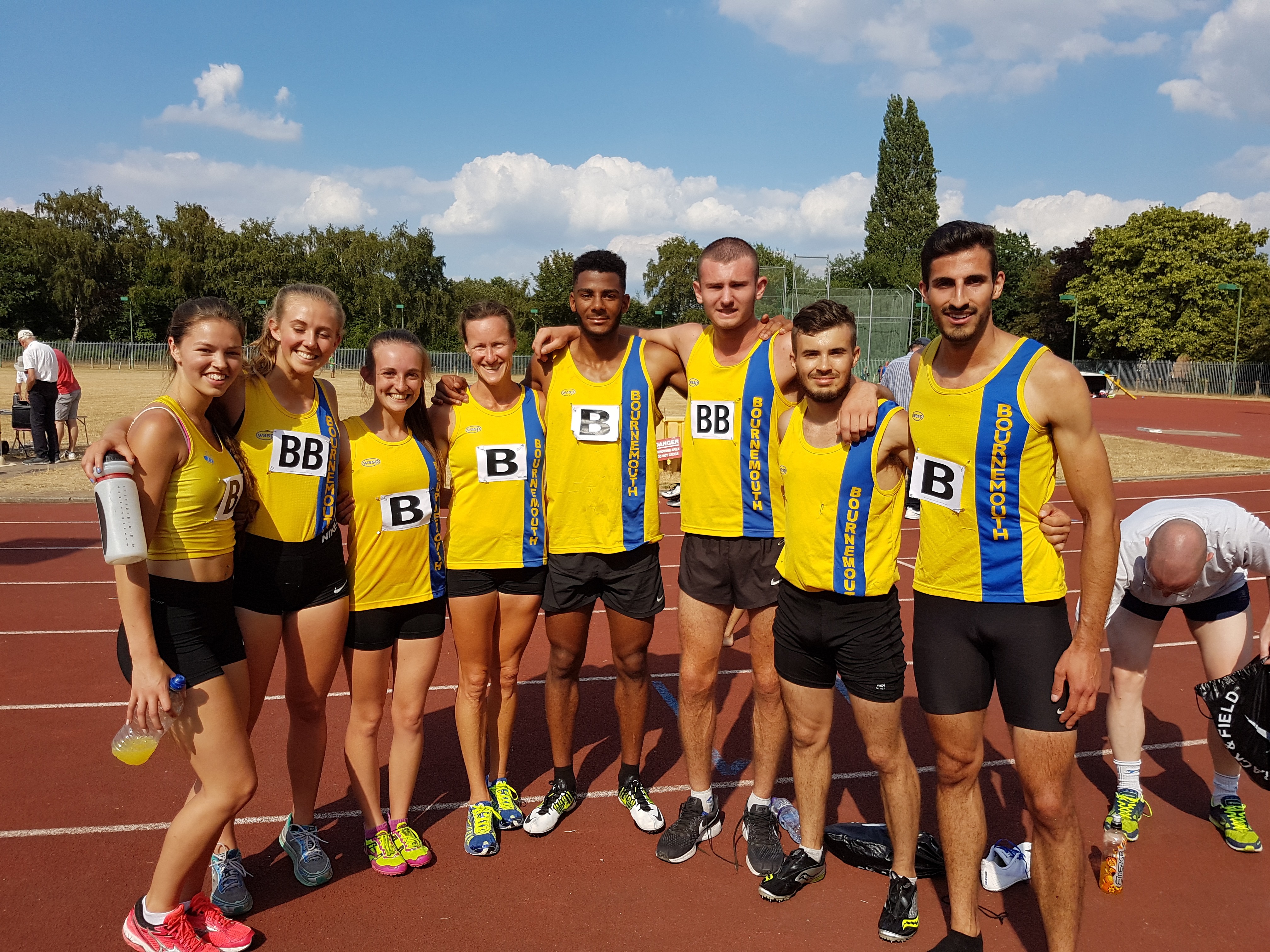 The sunshine weekend of 14-15 July 2018 generated many success stories for BAC Athletes. Janet Dickinson broke the British Masters Heptathlon record to be crowned champion. Mel Bird placed fourth in Welsh Shot Putt Championships, near her best performance.
Daniel Broom finished her fantastic English Schools career with 6th place in the Discus. She has been involved for five years, winning gold and silver over the past years. She came 5th in the Hammer. Whilst being Captain of Dorset team, Broom won the British Schools International to add a cherry to the top. 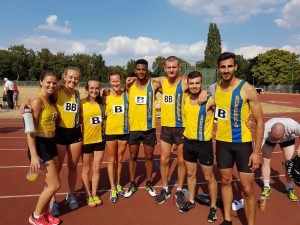 The SAL was hosted by Woking Athletic Club on a hot and sunny Saturday 14 July 2018. BAC loaded a coach with the men and women’s athletics team, officials, helpers and supporters for the penultimate match of the season. BAC went into the Runnings in 3rd place in Division 2 but it was uncertain whether this status could be maintained with so many athletes away. However, BAC pulled through to secure a remarkable 2nd place with 202.5 points against the home nation and division leaders, Woking AC. Basingstoke and Kingston were behind with 199.5 and 113 points respectively to show what a close match it was.

It was the usual challenge of rallying the dedicated troops to fill gaps in events. However, this match was a particular challenge with so many spaces to fill and the sun beating down so hard, it could a grown man weep. In true BAC spirit, athletes stepped up to the mark, sprinters filling longer distances such as 4×4 relay spots, runners throwing giant metal balls for the first time (later to discover it’s called a hammer!) and throwers, running and jumping. The support and incredible atmosphere helped fuel them along the way to achieve some remarkable performances.

Sheerin threw the Hammer 37.84m for 3rd A string spot and Brunsden threw 26.92m for 3rd.
Shepherd won the women’s hammer with a convincing 39.34m. This came after a brief and interesting coaching session to ensure Joy Wright didn’t wrap the hammer around her neck. Wright exceeded her own expectations by reaching beyond the grass to claim 2nd place B string with 16.96m PB. 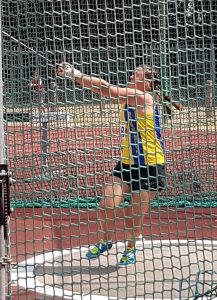 Brunsden secured another win in Discus with a 45.59m and Sheerin threw 25.99m for 4th place.
In the women’s discus, Shepherd and Wright were back in action both sealing 3rd place points with 20.71m and 16.25m respectively. 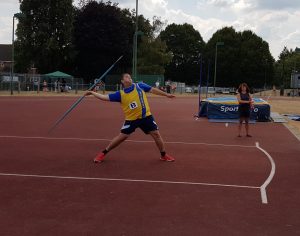 Sprints
Kevin Hodgson secured a convincing win in the men’s 100m with an 11.1 SB, making his mark on the track 0.6 seconds ahead of 2nd place Kingston. Joe Hayward ran B string in 12.2, close behind the Woking athlete. Muiris Egan ran 11.7 and Ryan Markham 12.1 to put their speed to the test (ns).

The women’s saw Chloe Burrows come home in 2nd place (A string) with an impressive 12.9 and Rebecca Hannibal grabbing another 2nd place (B String) in 13.7.
Jazmin Cooke and Victoria Coombs performed well, running 100m in 13.5 and 15.2

Patrick Sylla won the 200m by a large margin with an SB of 22.4 and another win for Hodgson, 22.9. Egan ran ns in a time of 23.4. These athletes are U23 and continue to show great potential as they develop at BAC.

The women’s 400m duo sealed 2nd place in both A and B string with Joy Wright and Abigail Richardson running 67.1 and 65.2. Unfortunately Wright coasted in with an Achilles injury and had to withdraw from the 100mH. 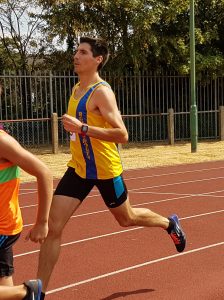 Holly Collier ran an impressive 800m in 2:26.8, winning by a significant margin and Abigail Richardson won B string with another well executed run of 2:28.8. 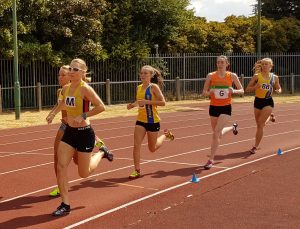 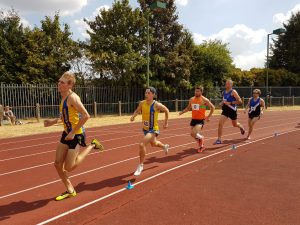 The men’s 3,000m was dominated by Rob McTaggart as he secured a convincing win in 9:07.3, well ahead of a 2nd placed Woking athlete. Tom Paskins made his second appearance for BAC to run a great PB of 10:16.6 to bring home more points for 3rd B String. 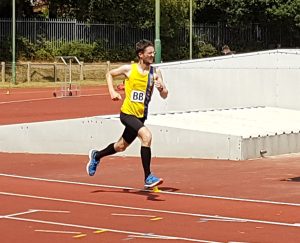 Next up, the women’s 5,000m saw Nikki Sandell and Julia Austin battle the heat in a fantastic race in extreme temperatures. Both sealed 2nd place A and B string in 20:42.5 and 21:09.9 respectively.

Hurdles
BAC took a hit in the hurdles due to lower numbers and injuries so only one athlete took on the men’s 110mH, namely Rob Woolgar’s with a sterling effort for a 16.6 PB, 3rd A string.

Steeplechase duo Holly Collier and Nikki Sandell secured 2nd place A and B string with Collier’s 5:54.9 PB and Sandell’s 6:34.5, an outstanding effort despite on-going injury niggles. 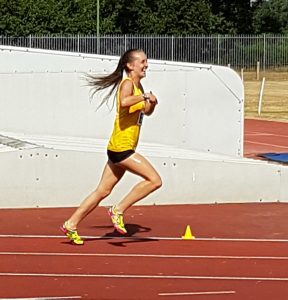 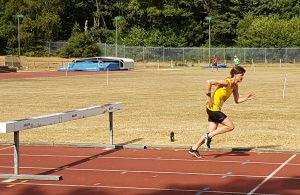 Nikki Sandell powers away after the jump in Steeple

Jumps
Patrick Sylla showed his talent with a convincing win in the Long Jump, 7.05m and Rob Woolgar jumped well to win B string with 6.48m SB.
Amelia Dobson took to the runway to win A string, 4.96m and Victoria Coombs scored more points with 3.61m.

Patrick Sylla and Lewis Sainval won the Triple Jump A and B string 13.22m and 12.73m respectively.
Amelia Dobson jumped 10.49m to come 2nd A string against some tough competition.
Isabella Shepherd worked her magic again to ensure she got a triple jump score for the team, 5.26m.

Lewis Sainval won the High Jump A string, clearing an impressive 1.90m, close to his PB.
Jasmin Cooke performed well for 2nd place in the women’s HJ with a height of 1.48m. Victoria Coombes claimed 3rd place by clearing 1.13m. During which time, Claire Cooke helped marshal the javelin in the style of the most elegant fetcher ever, wearing a lovely, flattering dress.

Andrew Brown cleared 2.35m in the men’s Pole Vault to finish 4th, A string. The women’s event witnessed Nikki Sandell’s 2.15m PB for 2nd A string and a PB for Jazmin Cooke with a 1.15m clearance and more valuable points.

Relays
The day’s events were wrapped up with some excellent relay performances. The men’s 4x100m won in 43.8 and the women ran well to come 2nd in 51.7. 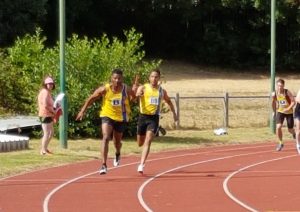 Mens 4x100m change over for the Home straight 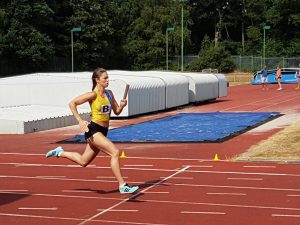 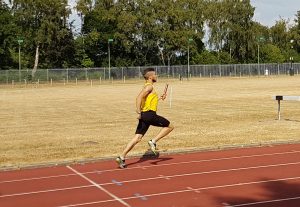 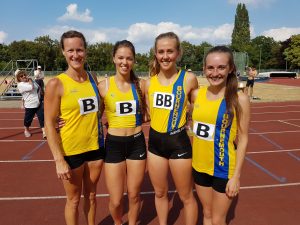 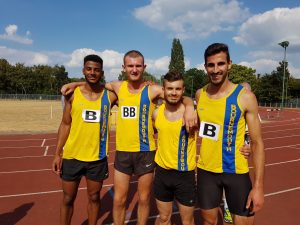 BAC surpassed expectation to maintain 3rd place in Division 2 West, especially considering they are newly promoted to a higher division against much tougher competition.

Not only have BAC managed to stay in Division 2 but they have maintained a high league position throughout and it is a credit to each and every BAC athlete, coach official, helper and supporter. Thank you all for your invaluable efforts and contribution – long way the success continue. As they say, “Sky’s the limit”!

The next and final match is a home fixture on Saturday 14 August 2018 and a strong team and match win would be a great end to another amazing T&F season.