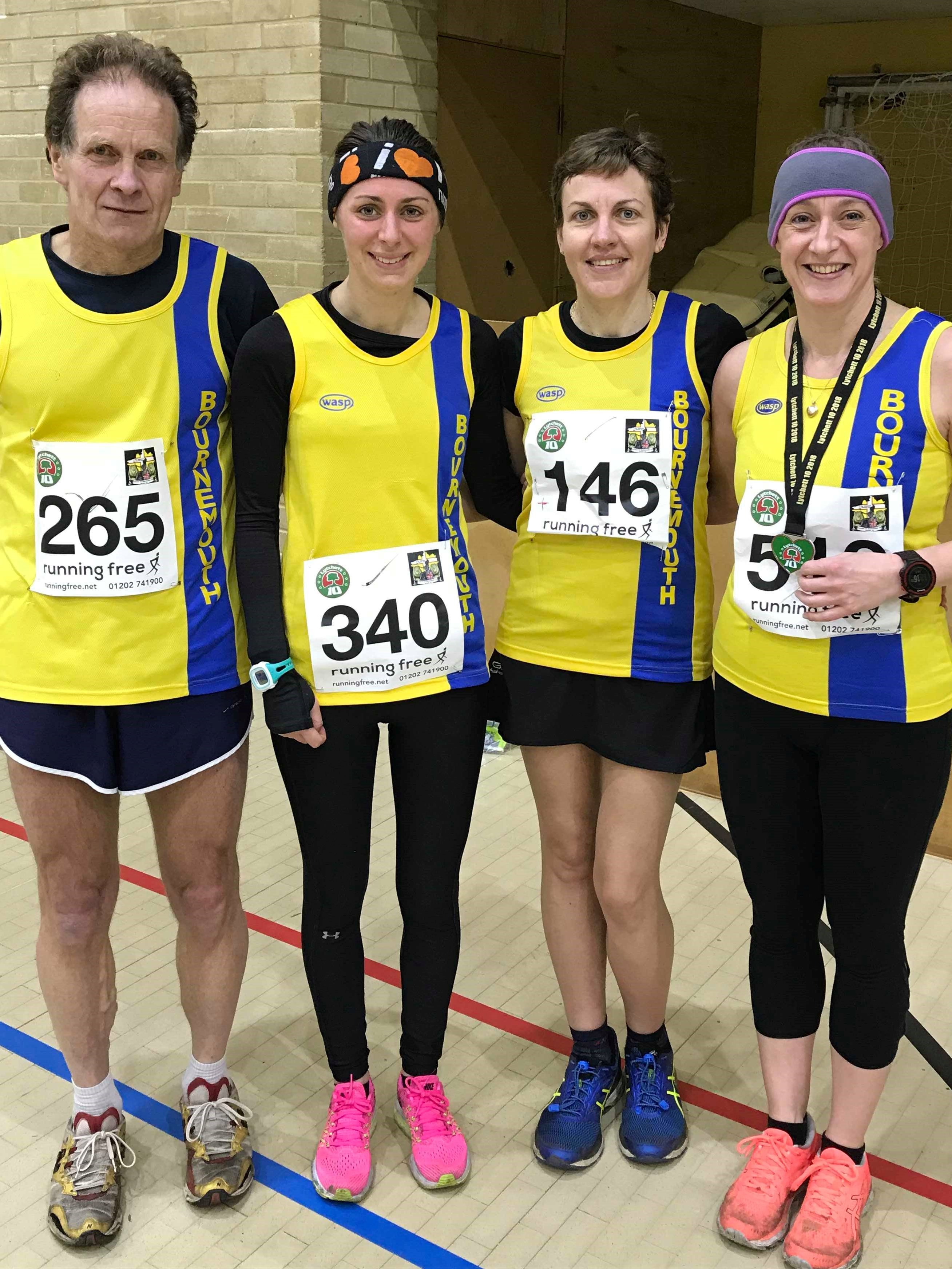 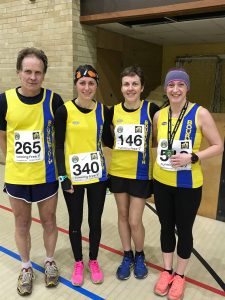 The Imperial Series of 2018 kicked off on Sunday 11th February with the Lytchett 10 mile race, where 6 Bournemouth AC members were looking to pit their wits against 442 others on the testing, hilly road route.

The race also doubled up as the Dorset County Championships for 10 miles so prizes were up for grabs in that as well for any runners representing Dorset clubs.

The conditions for the race were ideal and certainly bettered the miserable weather at the Hampshire Cross Country League fixture in Aldershot the day before. The sun even made a rare appearance, which seemed to get the positive juices flowing amongst the runners, the supporters and the many marshals out on route.

In fact, the marshals were given high praise for their enthusiasm and for the encouragement they gave all the runners as they made their way around the course. One of those marshals was Bournemouth AC’s very own Ian White, who always seems to do his bit to help local races. In fact, Ian is organising the second race in the Imperial Series, the Bournemouth 10, which takes place on 25th February.

As the race got underway, Craig Palmer of Littledown Harriers took an early lead with Josh Cole of Bournemouth AC in 2nd. Craig has been representing BAC in the Hampshire League Cross Country races and he had been in action the day before at Aldershot, finishing in a very creditable 8th place.

It had been a while since Josh Cole had been seen in a local race so it was good to see him back at the forefront of proceedings. After about 3 miles though, Steve Osborne, of Yeovil based club Running for Time, overtook Josh and Craig and he would assume control of the race from that point onwards. 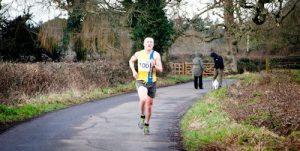 Making his return to action, Josh Cole was contending at front of the field in the Lytchett 10

Spending the rest of the race out on his own, Josh found it very hard work, with much of the first 7 miles of the race being on an upward incline. He managed to maintain the pace very well though, in spite of the tough hills, and crossed the line in 3rd place, in a magnificent time of 56:38. The winning time for Steve Osborne was 54:22, with Craig following in shortly after to claim 2nd in a time of 54:45. 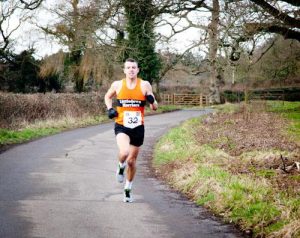 As the event also doubled up as the Dorset County Championships for the 10 mile distance, BAC President Ian Graham was on hand to work out who had prevailed in that competition. Because the race winner, Steve Osborne, was from a Somerset based club, that meant Craig took home the gold medal for the Dorset County Championships and Josh claimed silver.

As he will also be in action at the Bournemouth 10 on 25th February, Josh could well be targeting a win in the Imperial Series if he runs as well as he did at Lytchett. 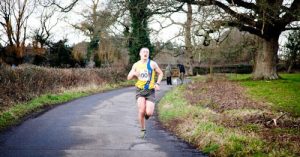 Josh took 3rd place in a stunning time of 56:38 and also won a silver medal in the Dorset County Championships

It was a double header for Lazslo Toth as well as he also took part in the Cross Country League fixture on the previous day. He also competed in thee Blackmore Vale Half Marathon the weekend before and, as if that wasn’t enough, he also cycled 16 miles to get to Lytchett and then another 16 to get home afterwards.

All those exertions didn’t stop Lazslo putting in sublime performance in the race and securing a top 10 finish with his time of 1:02:33. Lazslo’s strategy of not running too hard in the cross country and the day before and just “enjoying it” – if that’s not too much of a contradiction in terms – seemed to pay off as he had the strength and the energy to push hard in the latter stages of the race. 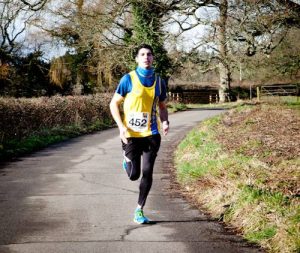 On a few of those miles Lazslo was accompanied by Steve Way, who was actually in the area and out for a 30 mile run which he had planned to coincide with the Lytchett 10 race. A 7 mile hilly loop that Steve often uses in his training runs just happens to be the main part of the Lytchett 10 route.

Another Bournemouth AC member who had a good day at the Lytchett 10 was Jud Kirk, who scooped 1st prize in the M55 category with his time of 1:11:07. That was good enough for 43rd place overall.

Having given his all in the Blackmore Vale Half Marathon the previous weekend, Jud wasn’t expecting too much for the Lytchett 10 so he was pleasantly surprised to pick up his £10 running voucher.

There was a bit of a commotion at the start when Jud was still trying to get his Garmin to work when the race began. Once he got going though, he made some good headway and the hilly profile of the course certainly suited him and worked in his favour. 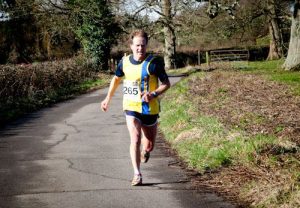 The next BAC member over the line was Kirsty Drewett. Kirsty has been running really well of late and you could even say she’s becoming a bit of a dark horse. Finishing in a time of 1:17:24, Kirsty toppled her previous best time which she did at the Wimborne 10 last year by over a minute.

The atmosphere created by the enthusiasm of all the marshals and the stunning scenery of the course contributed to make it a really enjoyable race for Kirsty and she felt the strong the whole way round. Taking 3rd place and the F35 category and 7th overall female, it was a pretty successful day for Kirsty and she finished 87th overall.

Looking to complete all three of the Imperial Series 10 mile races this year, Kirsty will be hoping she can place quite high up in the overall standings, which is decided on cumulative time over the three races. Last year that competition was won by her BAC teammate Yvonne Tibble. 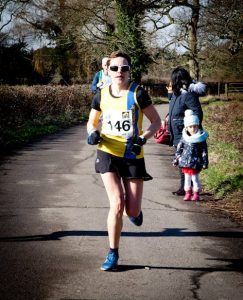 After smashing her half marathon PB at Blackmore Vale the previous weekend, Tamzin Petersen was understandably feeling a little fatigued and wasn’t able to muster up the strength to put in another spectacular display at Lytchett.

Instead, she suffered throughout the first 7 miles, where the course seemed to be an uphill battle all the way. That said, she still managed to improve on her previous best by 2 and a half minutes, completing the race in 1:20:02. This put her 4th in the Senior Female category and 12th lady over the line. In terms of the overall race, Tamzin finished in 111th position. 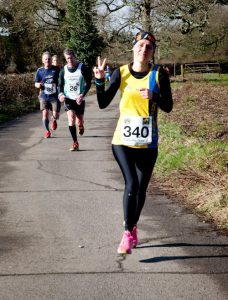 The BAC involvement in the race was rounded off by Sam Laws, who was  running the Lytchett 10 for the 3rd time. Sam was running with her friend Julia Marsh of Christchurch Runners and, since they are both training for the ABP Southampton Marathon in April, they did a 4 mile warm up run before tackling the lumps and bumps of Lytchett. 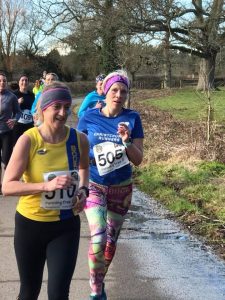 Sam was running with her friend Julia Marsh, with the pair already having 4 miles on the clock before the race had even started

In spite of the 4 miles they’d done beforehand, Sam and Julia were able to maintain a good pace throughout the run and they finished together, with Sam in 289th place clocking a time of 1:35:01 and Julia coming in a second later. 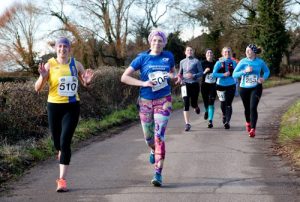 They finished 21st and 22nd in the F45 category and were 103rd and 104th women to cross the line. It was actually only 5 minutes slower than Sam’s PB time she did last year which, considering the mileage beforehand, was a pretty good result. 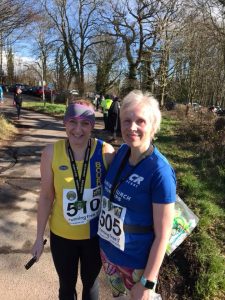 Sam and Julia take some time out to bask in the sunshine after the race on what turned out to be very nice day, especially in comparison to the miserable day before

One of the highlights of the race was undoubtedly the cake that was on offer at the end of the race. Several of the BAC members couldn’t resist tucking into a few of the tasty treats. To be fair though, they had certainly earned it after enduring so many challenging climbs throughout the race. 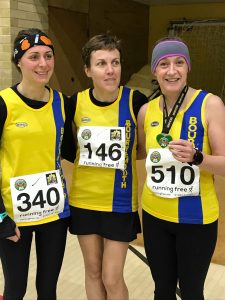 Tamzin, Kirsty and Sam are all smiles after completing one of the more testing 10 mile races you’re ever likely to encounter. Or perhaps they’ve just spotted the cake spread!