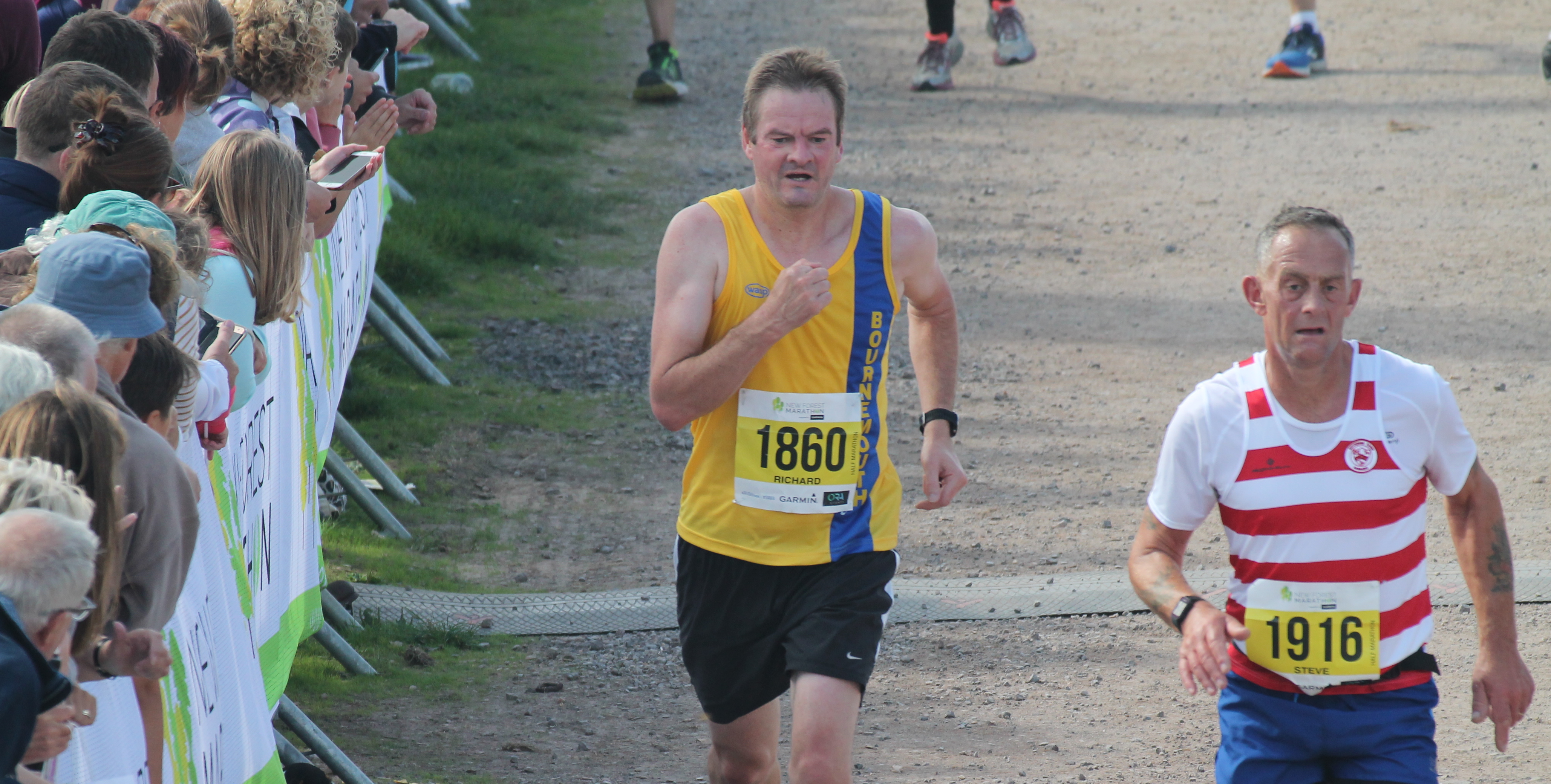 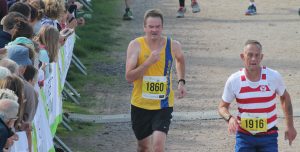 Rich Cannings was one of four Bournemouth AC members in action in various races at the New Forest Marathon event, along with Pawel Surowiec, Billy McGreevy and Chris O’Brien

The New Forest Marathon event took place on Sunday 9th September, comprising of four standard distance races, those being a Marathon, a Half Marathon, a 10k and a 5k.

As usual, there was a Bournemouth AC presence across the various races, with Pawel Surowiec and Rich Cannings taking part in the Half Marathon, Billy McGreevy in the 10k and Chris O’Brien in the 5k. The only race that didn’t feature any BAC members was the Marathon itself.

With the race earmarked as a potential PB opportunity, Rich Cannings was hoping to manage his first ever sub 1:30 half marathon.

Currently in training for the Bournemouth Marathon, Rich has been running very strongly over recent times and was certainly in shape to put in performance of note. This was underlined when he secured a new parkrun PB of 19:16 at Poole a couple of weeks ago.

Unfortunately his hopes were dashed though after he picked up an achilles injury in the run up to the race. He was also suffering from a backache as well so decided to treat it as a training run instead of going an all-out attack. 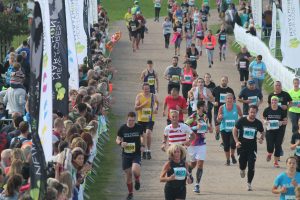 Due to a sore achilles, Rich ended up treating the New Forest Half Marathon as more of a training run that a race

It was a bit disappointing for Rich as he had wanted to cash in his good form but the blow was softened by the fact that he was able to run round with a friend instead, which is what he did, completing the race in a time of 1 hour 37 minutes and 35 seconds. That put Rich in 179th place in a field of 1,961 finishers.

Luckily there is another opportunity for Rich just around the corner as he will be competing in the Solent Half Marathon on 23rd September. If his achilles has recovered by then, he should be able to make a proper PB attempt there instead. 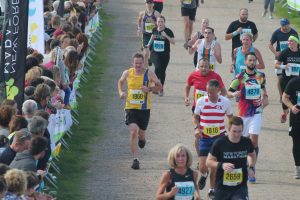 Another man looking for a good performance in the New Forest Half Marathon was Pawel Surowiec. Pawel has also been running well in training over recent months and has showed signs of progression in his parkrun times, managing a superb PB of 19:45 at Poole in July.

Unfortunately for Pawel though, the race didn’t go according to plan. When the day of the race came, he just simply wasn’t in the right frame of mind to run at his best. 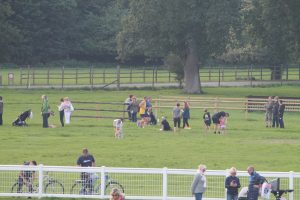 Consequently, it didn’t really happen for him and he ended up rolling in in 250th place with a time of 1:41:15. It was a time well below what Pawel is capable of and naturally he was disappointed afterwards.

With two more half marathons coming up in the near future though, one in Nottingham and one at the Bournemouth Marathon Festival, Pawel will have the opportunity to put that right and hopefully turn in a performance that reflects his true ability. 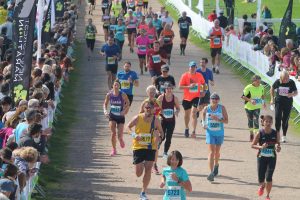 Coming in in 250th place with a time of 1:41:15, Pawel delivered a well below par performance in comparison to what he’s capable of

It was a tougher course than Billy had expected and he had been hoping for a quicker time. The gravel trails and a few climbs that were in there slowed him down.

In a frustrating end to the race, Billy had been in 2nd place with about 500m left to go before he got overtaken by Cole Pearce of Isle of Wight Runners. 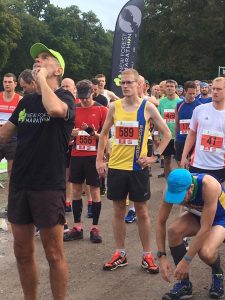 He did still get a t-shirt and a month’s free gym membership for his 3rd place so that was some consolation to Billy at least. He was also 1st in the M30 category.

At the New Forest Marathon event last year, Billy actually did the Marathon race, finishing in a superb time of 2 hours 56 minutes and 35 seconds which put him in 8th place. 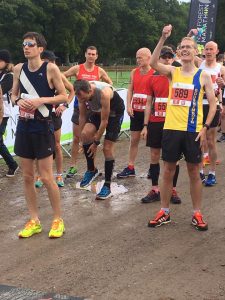 Taking 3rd place in the race, Billy completed the 10k distance in a time of 36:58

Another Bournemouth AC member returning to the New Forest Marathon after competing in it last year was Chris O’Brien. Last year Chris took 2nd place in the 5k race in a time of 21:46. This year he was again testing his metal in the 5k distance.

So far in 2018, Chris has been mainly focusing on endurance-based events so it was good to try a little gear change and see where his speed is at.

In June of this year Chris competed in Endure 24, an event where the task is to complete as many circa 5-mile laps as you possibly can within the space of 24 hours.

Chris did the event as part of a duo, successfully completing 14 laps himself meaning he’d covered just under 70 miles over the 24-hour duration. 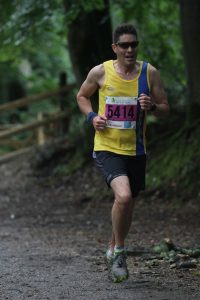 This time round Chris had to settle for 5th in the race, even though he did actually post a faster time than he did last year, clocking 21:10.

That was a decent run from Chris considering it was his first ‘speedy’ race this year and he feels it was a fair reflection of where he’s at right now.

Having been suffering a bit through injury so far this year, most notably from a glute issue caused by his pelvis being stuck in the wrong position, the most important thing was to make it through the race without any flare ups. He did manage that so that was pleasing to see.

There were also no stomach issues on this occasion as well which was another bonus. Chris does tend to get stomach cramps when running for time-to-time as well. 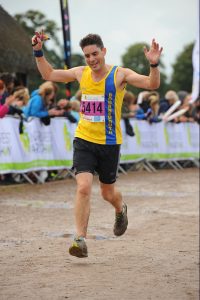 Although he still has a lot of work to do to get back to kind of form that saw him register his first very sub-3-hour marathon, which he did at Abingdon in March 2017, this certainly a step in the right direction for Chris.

The 5k race was won by Chris Phelan-Heath who has just recently moved to the Bournemouth area from Lincoln. Chris has already attended a few Bournemouth AC training sessions and is looking to join the club once he gets settled.

With some very speedy 5k and 10k times in his arsenal, Chris will be a great asset to BAC and it will be fantastic to see him out there in the yellow and blue vest.

The New Forest Marathon 5k was his last race in the colours of his previous local club Lincoln Wellington and he certainly signed off in style, taking the victory in a time of 19:06, giving him a 29 second margin over Lukas Harber of Worthing & District Harriers who was 2nd.