BAC members get stuck in at Poole Festival of Running 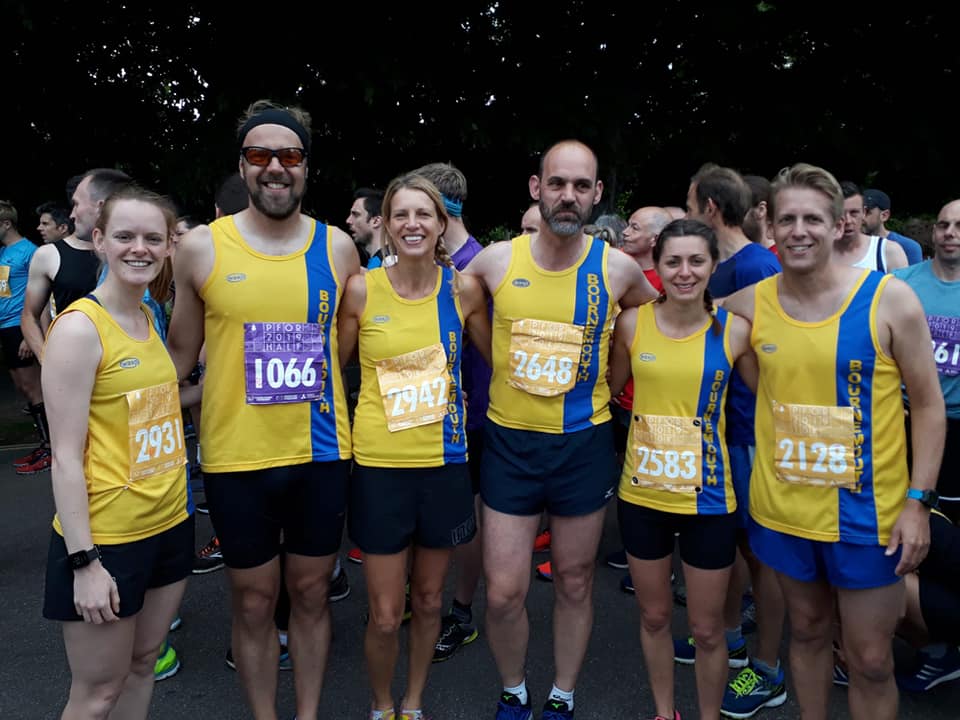 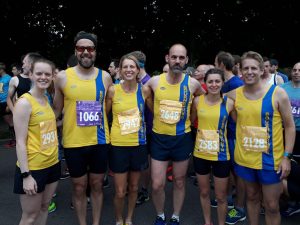 For many years now, the Poole Festival of Running has been an event well supported in numbers from a Bournemouth AC perspective, as well as the other local clubs around the area. This year’s edition saw an interesting twist to the proceedings when the Twemlow training group containing many of Dorset’s finest club runners made the controversial decision to ditch their club vests in favour of a freshly printed Twemlow Anchors attire. That was a move that certainly ruffled some feathers on the Dorset club scene.

The weekend proceedings began with Saturday evening’s 5k ‘Run for Cancer’. In that race Jacek Cieluszecki was looking to defend his crown from last year, when he came out on top in both the 5k and the half marathon race the following day.

Others vying for top honours in this year’s 5k included JC’s Bournemouth AC teammate Rob McTaggart and Chris Alborough of Poole AC. The Dorset Runners’ equilibrium was about to take its first denting of the weekend when Steve Gallienne from Bideford AAC swooped in to steal the spoils.

Posting a spectacular time of 15:30, Steve had prevailed over Jacek with a winning margin of 7 seconds. Just as he had at Wings for Life in Florida and in the Maraton Juranda in Poland the previous weekend, JC had to settle for 2nd place.

That said though, he was pleased with his time of 15:37, which was pretty decent, especially just one week after a 2:35 marathon. Rob McTaggart also had a good run to take 3rd place, crossing the line in 15:45, with Chris Alborough taking 4th in 15:57. There were 383 finishers in total. 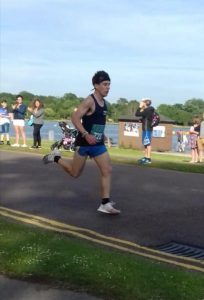 Rob McTaggart gave the Twemlow Anchors vest its first airing in the 5k race where he took 3rd place in 15:45

Both JC and Tag were in action again the following morning as they lined up in a star-studded field for the 10k race, also featuring Steve Way, Ant Clark, Dave Long, as well as Chris Alborough and Chris Wood of Wimborne AC.

With prize money at stake as well, you could guarantee that all the big names would be giving it their all which made for an exciting spectacle. The Twemlow Anchors did not seem to be weighed down by the new vest tops and dominated the proceedings, occupying the majority of the top ten places. 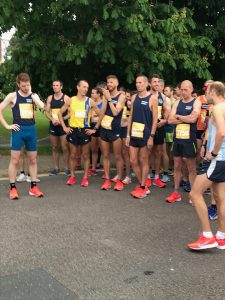 However, it was Steve Gallienne who again showed up to upset the applecart and romp home for the win, scooping the lion’s share of the lute on offer. Crossing the line in another extremely impressive time of 31:13, Steve completed a smash and grab raid that no one was expecting. 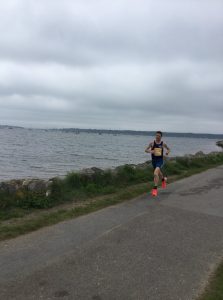 Even the super speedy Dave Long couldn’t quite contend with the Bideford man. Disco ran well though and at the end of a high mileage week, delivered a pleasing performance to reach the line in 31:47. 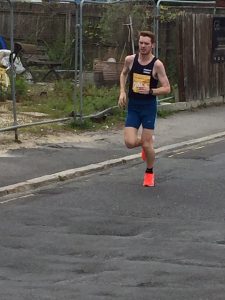 In third place, it was last year’s winner of the 10k race, Steve Way. Since returning from some high altitude training in the Alps as part of his preparation for the Comrades Marathon, Steve was looking in much better shape and had found some good form just at the right time. 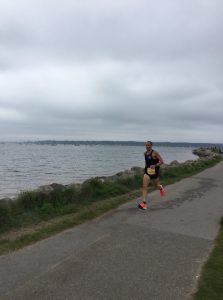 Finishing in 32:12, it was an encouraging run for Steve and helped give him further confidence for Comrades the following weekend. 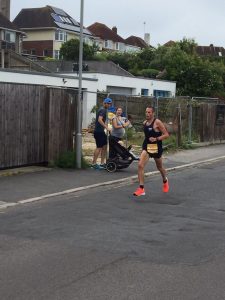 The next man to come in, taking 4th place in exactly 33 minutes, was Jacek. Resisting the temptation of the Twemlow tank top in favour of the traditional yellow and blue of BAC, JC completed very good double-header and he was pleased with his efforts. 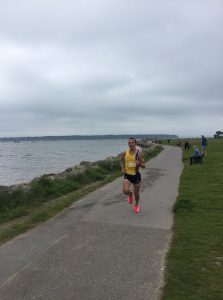 Despite pressure from the Twemlow Anchor boys, JC remained faithful to the yellow and blue of BAC

Next over the line was David Broadley of Poole AC, sealing a 5th place finish in a time of 33:27. He came in just ahead of Tag, who managed 6th place to go along with his 3rd place in the 5k the previous day. 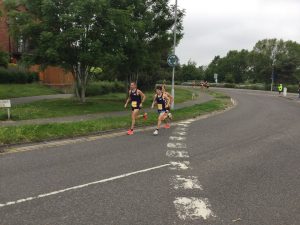 Steve, Tag and JC were running together for some of the race

Registering a time of 33:36, that was good enough to see Tag take 3rd prize for the 5 and 10k double behind Steve Gallienne and JC. He ended the weekend £50 richer as a result but he certainly felt like he’d earned it. 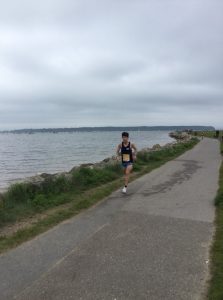 Ant Clark followed in shortly after to take 7th place in a time of 33:57 arriving with Twemlow Anchors training buddy Mark Smith who was 8th in 33:58. Ant had also been with Steve on his training excursion to the Alps and was now feeling ready to go for Comrades after this last little taper effort. 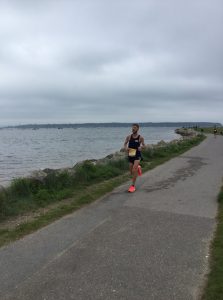 Andy Leggott of Lonely Goat RC and Chris Alborough completed the top ten, finishing in times of 34:08 and 34:43 respectively, Chris being the next man to complete his 5 and 10k double.

The first female over the line was Louise Damon of Winchester & District who came in in 14th place, clocking a time of 35:58. She was followed by Lucy Marland who was 16th in a time of 36:07. 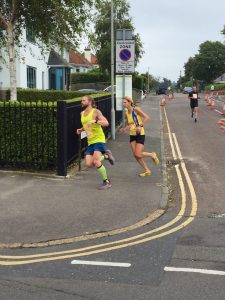 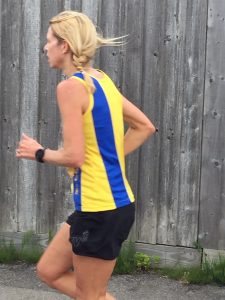 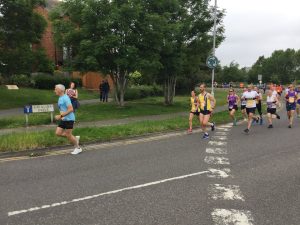 Ian White and Tamzin Petersen running alongside each other

Weighing in with his first sub 7-minutes-per-mile average pace 10k for quite some time, Ian White showed his form is progressing well. He finished in a time of 43:38 to take 95th place overall. 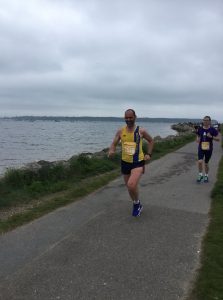 Ian looks in good form as he comes along the Quay 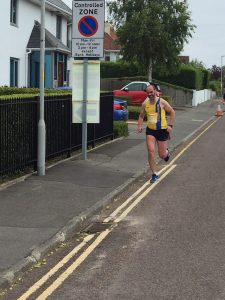 Sneaking in with a nice new 10k PB, Tamzin Petersen continued her cracking form of late to cross the line in 44:45. That bettered her time at the Bournemouth Marathon Festival last October by 14 seconds and put her 5th in the Senior Female category and 120th overall. 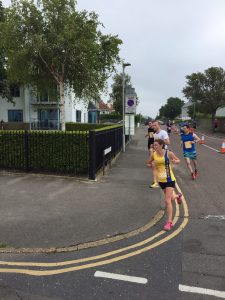 Tamzin turns the corner on the Twemlow section of the course

Following up her recent 5 mile PB at the May 5 in Canford Heath and a 3rd placed female finish at the Ramsbury 5 mile race before that, it’s been a good couple of months for Tamzin. 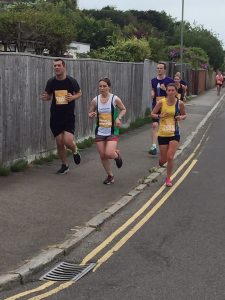 Tamzin heads toward a brilliant PB of 44:45

Unfortunately it wasn’t such a successful outing for Phil Cherrett. He was violently sick after the first 5k and then a couple more times before getting to 8k. By then he’d already lost a lot of time but somehow managed to muster up a decent finish to get over the line in 47:48. 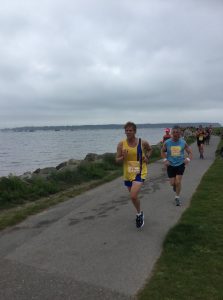 That put him in 171st place overall. It was a miracle he even finished at all though after suffering in the way that he did. 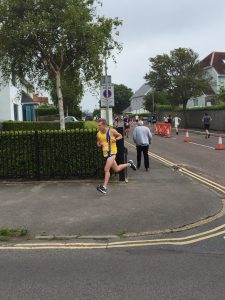 Despite making several stops between 5 and 8k, Phil persevered and completed the course

The next Bournemouth AC member over the line was Katrina White, who completed the course in a time of 48:52. That saw her to 16th place in the Senior Female category and 193rd place overall. It was over a minute quicker than the time she posted at the Bournemouth Bay Run in April so a pleasing run for Katrina. 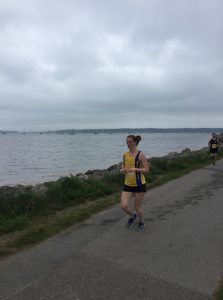 Katrina White makes her way down the Quay 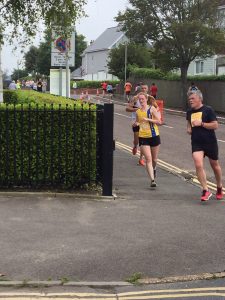 Katrina nears the end of a good sub-49 minute run

After being out of action for a while due to a calf injury, Simon Hunt took it slow and steady, managing to make it through the race okay. Crossing the line in a time of 48;50, Simon was 6th in the M60-69 category and 199th overall. His wife Marilyn who runs for City of Salisbury also ran, completing the course in 1:06:33, which put her 17th in the F60-69 category. A total of 850 runners completed the 10k race.

In the team competition for the 10k, it was a clean sweep for Bournemouth AC, with Dave Long, Steve Way and JC taking 1st in the men’s and Emma, Tamzin and Katrina taking 1st place in the women’s.

The Half Marathon race started off at the same time as the 10k but only featured one Bournemouth AC representative and that was Pawel Surowiec. Pawel had only landed back from a trip to Washington on Friday night and was still feeling jet lagged when he took to the start line. 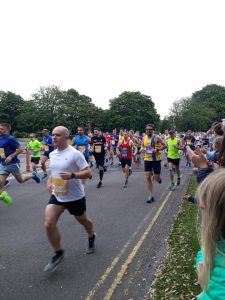 Despite only recently flying back from Washington, Pawel Surowiec lined up for the Half Marathon race

As a consequence he wasn’t really feeling mentally ready for the challenge that a half marathon would present and that made it difficult for him. Nonetheless though, he pressed on and completed the course, crossing the line in a time of 1:36:23. That put him in 49th place out of 403 finishers. 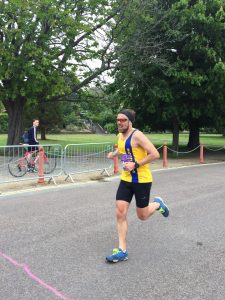 A relieved Pawel heads toward the finish line to take 49th place in the Half Marathon in 1:36:23

Lee Dempster was flying the flag for the Twemlow Anchors in the Half Marathon and he picked up the victory, crossing the line in an excellent time of 1:15:13. That gave him a winning margin of almost two-and-a-half minutes over his Lytchett Manor Striders clubmate Scott Parfitt, who finished 2nd in 1:17:41.