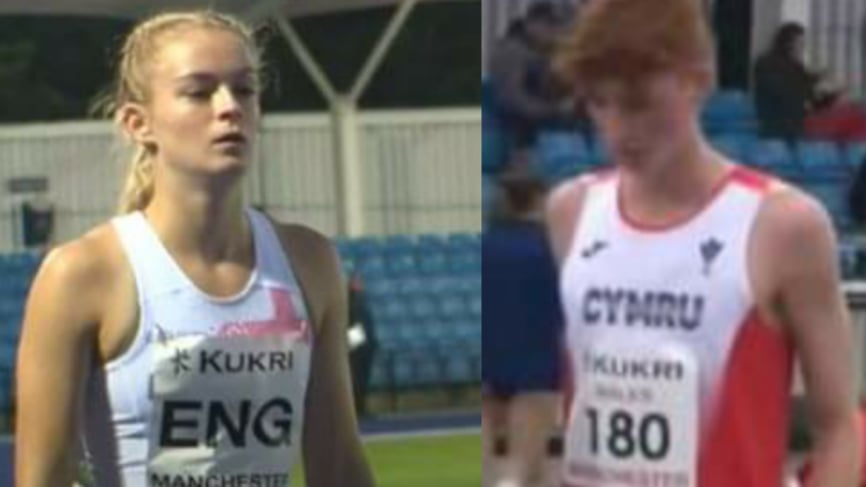 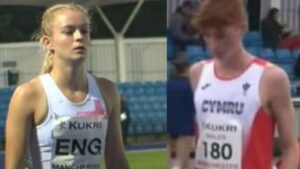 Several Bournemouth AC members were on duty for their country at Manchester International, including Amelia Verney who represented England and Oliver James who ran for Wales

It’s always a proud moment for an athlete when they get to pull on their national vest and represent their country. That’s an extraordinary achievement that not many out there will ever get to experience.

In a true testament to the coaching structure and the up and coming talent the club possesses, Bournemouth AC had three first claim members competing for their countries at Manchester International.

After finishing 3rd in the England Athletics Senior Championships in Bedford in July, Phoebe Dowson was in action for England the Senior Discus Throw.

One Bournemouth AC athlete who’s really caught the eye in recent months is sprint sensation Amelia Verney. She was a finalist in the England Athletics Under 20 Championships 100 metres and despite being only 17, made it to the semi-final of the senior British Championships where she squared off against Dina Asher-Smith. 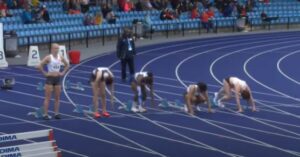 Another BAC member showing huge potential of late is Oliver James. He won the 2000 metre steeple chase at the Welsh Junior Championships in a time of 6:23.04 and was 5th in the 3000 metre flat in an amazing time of 8:55.38.

The Manchester International fixture pits a team from England against sides from Scotland, Wales and Northern Ireland, along with a National Athletics League squad and a GB Junior team.

Each event features a Junior race, which is for the Under 20 athletes, and a Senior race. The points from both races count towards the overall team score and the team with the most points once all the events have been completed is declared the winner.

The format ensures that the Junior races hold equal importance to the Senior ones. Every race, every throw and every jump matters and could prove crucial to the overall outcome.

No pressure then for Amelia Verney, who was part of the England squad for the Junior 4 x 100 metre relay. She was also competing in the 100 metre race, although she wasn’t the designated England scorer for that event. 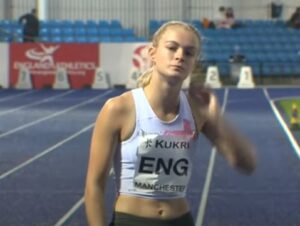 Representing Wales, Oliver James was competing in the Junior 3000 metre steeple chase. In that race the Juniors and Seniors were combined together so he was going to be up against some of the top distance runners in the UK. They would still be divided into Juniors and Seniors for the race results though. 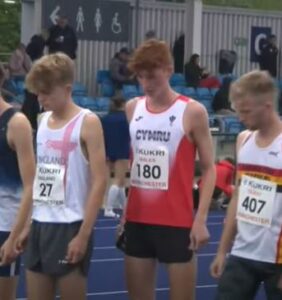 Oliver James lines up for his 3000 metre race, donning a Wales vest for the first time

There was also another athlete with Bournemouth AC connections in action that day in the 400 metre hurdles and that was Adam Booth. Adam is a hire claim member and he was competing for the GB Juniors in the Senior Men’s race.

Adam is an incredible talent and he’s really found his way this season since focusing on the 400 metre hurdles. He won the England Under 20 Championships, producing a magnificent time of 51.47.

He also finished 5th in the British Championships, which was a senior race, and also emerged victorious in the South of England Under 20 Championships.

In fact his talent has even taken his beyond the national stage as he competed in the European Under 20 Championships in Tallinn, Estonia, where he made it through to the semi-finals. In that race he recorded a new PB of 51.38 to finish in 4th place. 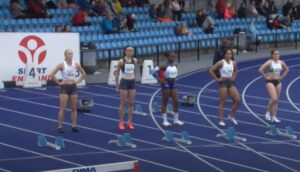 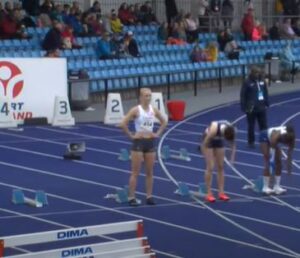 In the Junior 100 metre race, Amelia Verney was up against the super-quick Joy Eze, who was running for GB Juniors.

Finishing 4th in the race, Amelia clocked a time of 12.26. Joy Eze looked extremely impressive as she cruised to victory in a time of 11.71 and her future prospects look bright at only 17 years of age.

So do Amelia’s though and to be competing at the level she is now at such a young age demonstrates the huge potential she has to become a big star. 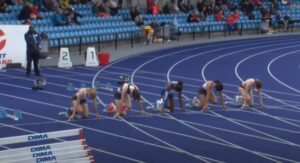 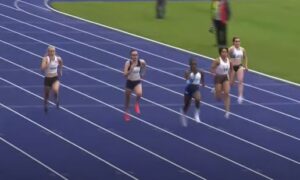 Amelia powers down the straight giving it everything she’s got

In his 3000 metre steeple chase race, Oliver James ran well to secure a bronze medal, crossing the line in an impressive time of 9:44.70.

In stark contrast to his 2000 metre steeple chase run in the Welsh Junior Championships where he ran on his own, this time he was surrounded by top level talent. 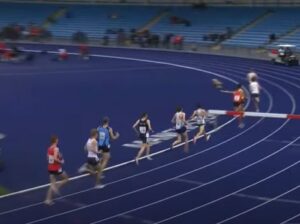 The 3000 metre steeple chase gets underway 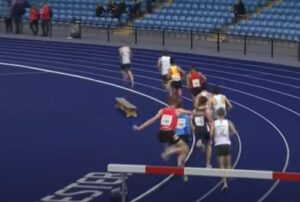 William Battershill put in one of the most impressive performances of the entire program to win the race in a time of 8:32.92. Chris Perry, also of England, was 2nd in a time of 8:40.88, with Adam Kirk-Smith of Northern Ireland taking 3rd in 8:49.74. 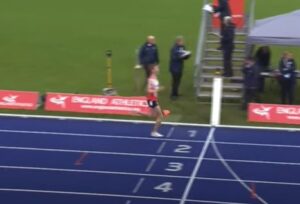 Southampton based athlete Alex Tueten finished 5th overall in a time of 9:10.85. Out of the Juniors, Yehonatan Haim was the quickest, getting round in 8:56.60 but he was a non-scorer.

That meant Peter Bradshaw secured the gold medal for Scotland in a time of 9:20.27, with Thomas Bridger of England taking silver in 9:41.70. Then it was Ollie, proudly claiming bronze for Wales. 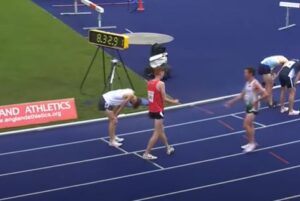 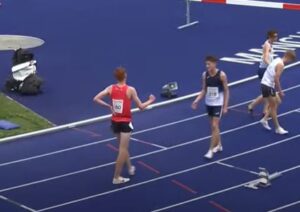 In the Women’s Senior Discus, Phoebe Dowson‘s throw of 50.70 saw her secure a superb silver medal. Only Shadine Duquemin of the National Athletics League could top that, laying down a marker no one else could live up to with her enormous throw of 54.44.

It was another terrific accolade to add to resume for Phoebe though as she continues to go from strength to strength this season.

In the Senior Men’s 400 metre hurdles, Adam Booth claimed a silver medal for GB Juniors, clocking a time of 51.55. The gold went to Chris McAllister of England in a time of 49.65. Josh Fields was the only other man to go quicker than Adam and he finished 2nd in 51.27 but was a non-scorer.

It was another fantastic result to add to the list for Adam in what has been a glittering year so far, especially since he was competing in the Senior race.

Adam also competed for England in the Junior 4 x 400 metre relay, helping them on to a resounding victory. The England quartet completed the race in a time of 3:15.31, which saw them come in four seconds ahead of their nearest rivals.

Adam took the 2nd leg, running a time of exactly 49 seconds. That was a gold medal to add to the silver he’d already collected so not a bad day’s work for Adam, all things considered. 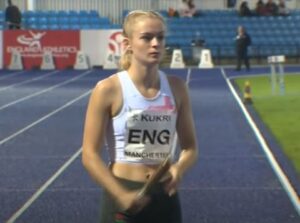 Amelia has the baton in hand, ready to kick things off for the team 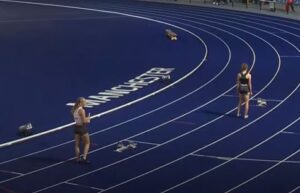 In one of the final events of the day, Amelia Verney lined up for the Junior Women’s 4 x 100 metres where they took an Under 20 team from Scotland.

Tasked with getting the team off to good start, Amelia went in the first leg and looked to have given England the upper hand before passing the baton over to Millie King for the second leg. 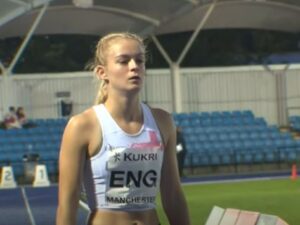 Amelia looks focused and in the zone 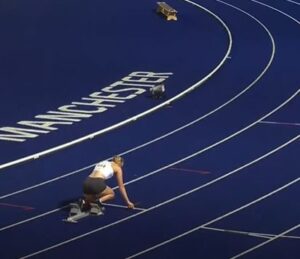 With Scotland the only opponents, a medal was a sure thing for Amelia but there was only one colour she wanted

Mollie then extended England’s advantage before runs from Abigail Pawlett and Mallory Cluley saw out the victory in a time of 46.97. Freya Cowan was chasing Mallory down in the final leg but couldn’t make up enough ground, forcing the Scots to settle for the silver medal, clocking a time of 47.30.

That meant Amelia would return from Manchester with a gold medal round her neck and no doubt a beaming smile upon her face. It was a reward she thoroughly deserved after all the hard work and dedication she’s shown this season. 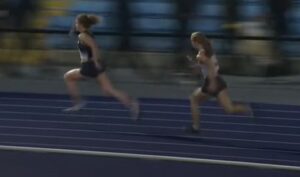 She’d also helped England on to secure the overall win in the final team results, with the squad securing a total of 395 points. That saw them finish comfortably ahead of the GB Juniors who took 2nd place with 305 points. 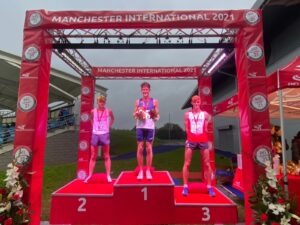 It was a fantastically entertaining day of athletics with all the British athletes playing their part to make it a highly competitive showdown.

It was great to see some Bournemouth AC members shining on the international stage as well, doing themselves, their club and their countries proud.