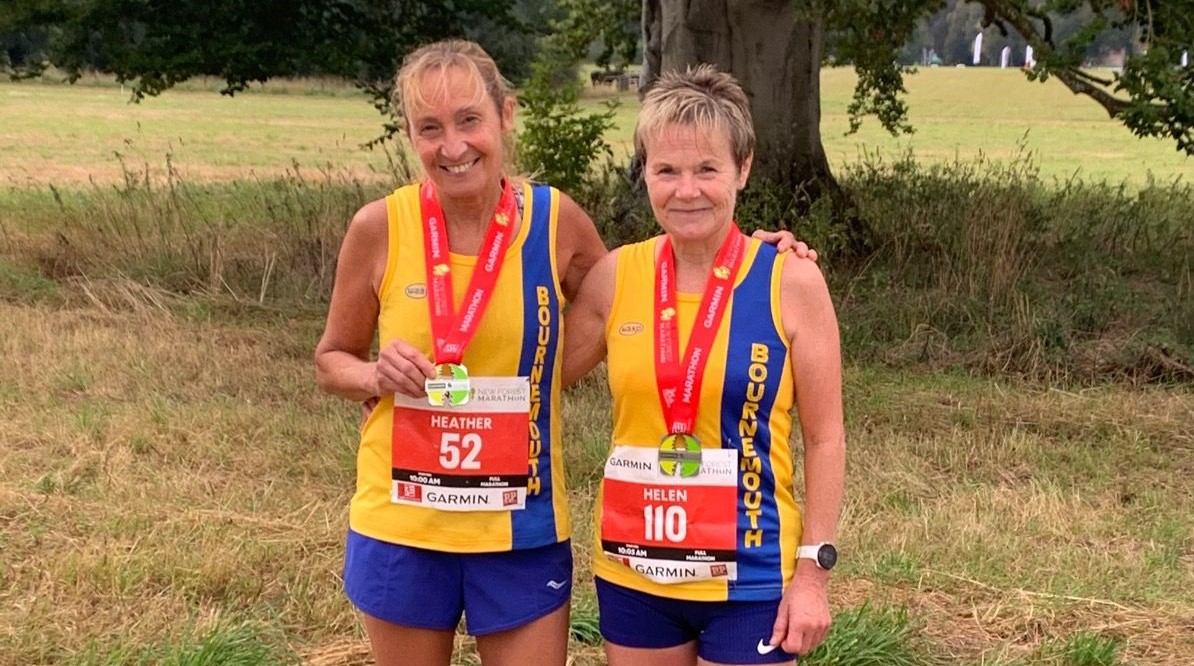 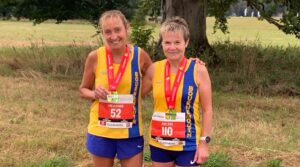 Heather Khoshnevis and Helen Ambrosen were amongst the Bournemouth AC contingent who featured at the New Forest Marathon event, along with Georgia Wood and Emily Coltman

It had everything you’d expect from a New Forest Marathon event… A wonderful blend of varied terrain including trail, gravel, grass and farm tracks; a beautiful rural setting with miles of unspoilt scenery; an epic tree-lined finishing straight; a choice of distances to suit runners of all abilities.

In fact, the only thing it didn’t have which you would have expected it to have, was a New Forest location. Yes, that’s right. The New Forest Marathon isn’t actually in the New Forest any more. Or at least it wasn’t for this year, or last year either.

Now staged in the picturesque grounds of the St Giles Estate, the New Forest Marathon has indeed settled into a new home. But it’s one that allows for a very COVID safe environment, with plenty of space for the athletes to wait, warm up and filter into the start area.

Last year’s New Forest Marathon was one of the first big marathon events to go ahead after COVID restrictions were being cautiously eased over the summer. And to all intents and purposes it was a huge success and a landmark occasion for races in the area.

Now the measures are a lot less stringent, it gave the athletes and race organisers more scope to focus on the running part rather than the necessary protocol they would need to follow.

Over the course of the weekend there was a 5k race, a 10k race, a Half Marathon and a Full Marathon. After running the Full Marathon last year, Heather Khoshnevis was back to do it all again.

It’s a very tough course though and the terrain is certainly testing in places. She struggled a bit over the last eight miles that day but Heather did win her age category so that made it all worth while.

She was joined in the barracks by Helen Ambrosen. It was Helen’s last long run before she takes on the York Marathon, which is on the road, so this would undoubtedly serve as a very good training run for that, particularly as the terrain would be so much tougher.

Georgia Wood was also at the event and she was taking on the Half Marathon which was scheduled for the following day. She was treating it as a training run really though so wasn’t planning to go all out.

Also in action from the Bournemouth AC ranks was Emily Coltman and she was competing in the 5k race, just as she had the previous year.

And like last year, she was joined in the race by Erin Wells, who was previously a BAC member but has since transferred to Poole AC.

Erin recorded a top five finish last year and was 1st female so if she could repeat those heroics again, she would have been overjoyed. 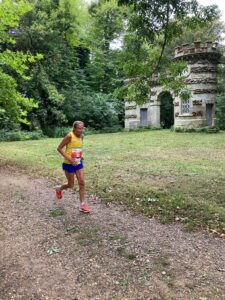 This time Heather enjoyed the second lap of the Marathon more than she did the first, although that was mostly due to fact that she knew she would be finishing at the end of it.

Although the grounds of the St Giles Estate are nice, Heather thinks she preferred the pre-COVID course. She found it bit boring with just bushes and trees, freshly cut corn fields and dry, loose grass.

Completing the course in a time of 4 hours 8 minutes and 36 seconds, Heather was 61st overall out of 236 participants and she was 2nd in over 60 category but 1st female.

Out of the 78 women who took part in the Marathon, Heather was 14th fastest. Her time was just over two minutes slower than the previous year but she justified that by pointing out that she is a year older! 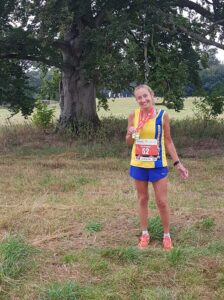 Heather was pleased to come in as the 1st over 60 female, although that does mean she’ll have to run it again next year!!

When crossing the finish line she had that familiar feeling runners often get where their first immediate reaction is… “never again”.  that usually soon subsides though as the sense of achievement begins to overshadow the pain that was felt in the process.

Her category win earnt her a free entry into the race next year, although it’s up for debate whether that is actually a prize or a punishment. She will endeavour to forget about how tough it was between now and then though.

Since it was described as a course with gravel trails, Helen got prepared by wearing her heavy duty trail shoes. Since she lives near Wimborne, she’d trained a lot on gravel but when going off-road there it’s usually thick gravel.

The surfaces at the New Forest Marathon were something completely different though. The route included thick grassy sections where she would have benefited from having lighter shoes. 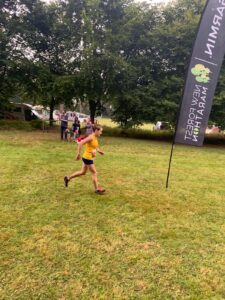 Finding the second loop very tough going, Helen had to dig deep and show some great resolve to keep going and get to the finish. Clocking a time of 4:32:52, Helen finished 113th overall and 29th female. She was also 3rd over 60.

Even though it was tough, by the time she got back to the car, Helen already felt like she wanted to go again next year and do it better.

She found it to be a lovely venue and felt the event was extremely well organised. But she’s her own harshest critic and couldn’t help wishing she’d run better. 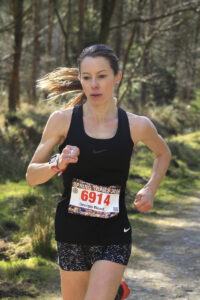 Georgia Wood was in action over Half Marathon distance

In the Half Marathon, Georgia finished 10th overall out of 584 competitors with her time of 1:32:36 and 2nd woman out of 301. That wasn’t a bad result at all considering she was only treating it as a training run.

Emily Trumplemann was 1st female over the line and she registered a time of 1:31:33 which put her in 8th place overall. 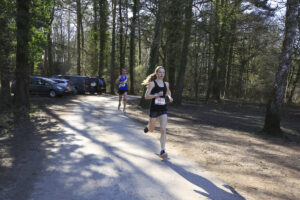 In the 5k race, Emily Coltman managed a top 10 finish this time round, securing 10th place with her time of 21:01. That saw her come in as 3rd placed female, just as she did the previous year.

Crucially though, she’d run it a minute faster and that represented progression for Emily, who is still in the junior ranks. Once again, she had impressed against predominantly adult competition.

Her dad Jason ran as well and he got round in a very good time of 20:20 which put him in 7th place overall. The week after that he would be competing in the London Marathon – and then the weekend after that – the Atlantic Coast Challenge!

Although she had a brilliant run, Erin Wells was pipped to the post for the 1st female crown this time round by Jen Granger. Jen came in 3rd overall in a time of 17:50 with Erin taking 4th place in 18:23.

Her time from last year was 19:53 though so she’d made a considerable improvement on that. Thus it was another showing of tremendous progression from a very talented young athlete.

She went on to compete for the South West in the London Mini Marathon before heading up to Birmingham for the National Road Relays. 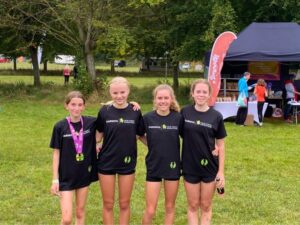 The weekend after the New Forest Marathon, Heather would go on to compete in the London Marathon, giving her very little time to recuperate and refresh.  She’s used to doing a lot of marathons though and seems to have legs of iron so it wasn’t likely to present too much of a problem for her.

Then after that she’ll be putting on her England vest and representing the EA against the Celtic teams in the York Marathon. And joining her in the York Marathon, Helen is very much looking forward to a run on much easier terrain than the thick grass she had to face at the New Forest one. 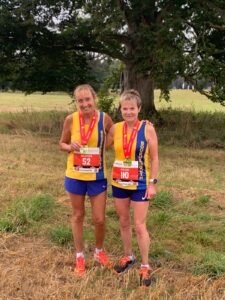