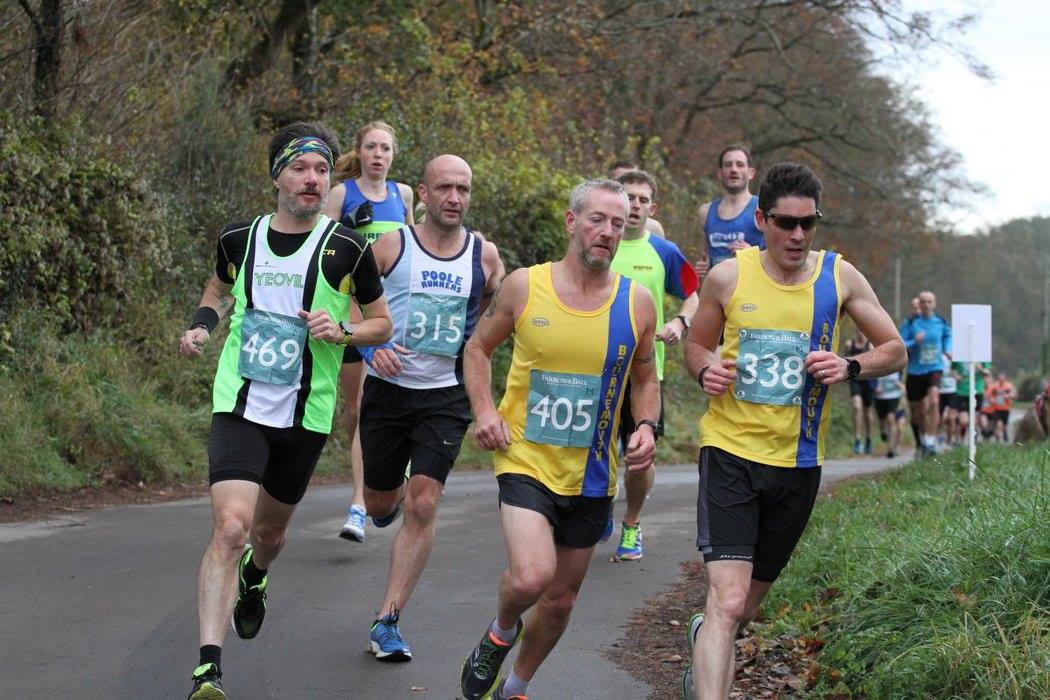 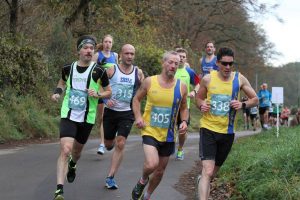 Despite not being listed as a Dorset Road Race League fixture this year, the Wimborne 10 still attracted a very high class field, including eight Bournemouth AC members. The results for the yellow and blue army were exceptional, boasting four category wins along with four fantastic new 10 mile PB’s.

Getting back to something close to her best form, Emma Dews finished as 2nd lady in a phenomenal time of 1:03:56. This put her in 32nd place overall in a field of 475 starters. It also gave her 1st place in the FV40-44 category.

Emma was just over a minute and a half behind Joanna Hanna of Poole AC, who won the ladies race in an incredible time of 1:02:25, putting her in 17th overall. 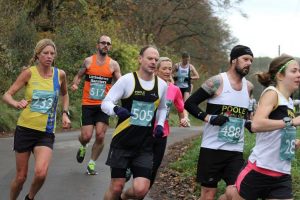 Emma Dews in pursuit of the leading lady, Joanna Hanna

A 35 second gap separated Emma from the 3rd placed woman who was Kate Cadbury. Vicki Ingham of Poole Runners was 4th in 1:06:55.

Buoyed by a great performance in the Abingdon Marathon, Sanjai Sharma seems to have got his mojo back now and he had another strong performance, winning the MV55-59 category in a time of 1:02:02. This put him in 12th place in the overall standings.

In fact it was the exact same position that Sanjai had finished in last year and was only 40 seconds shy of the blistering PB he set that day. 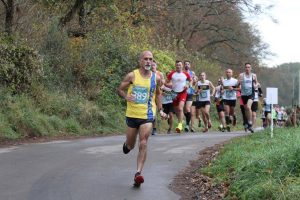 After managing to overtake a few others he had been battling with over the second half of the race, Sanjai was pleased with the outcome and had nothing left in the tank when he crossed the line.

The race was sponsored by Farrow & Ball and Sanjai was quite happy to receive his prize of  decorating book and a voucher for 10 litres of paint. No doubt at least some rooms in his house will be getting a makeover in the near future. 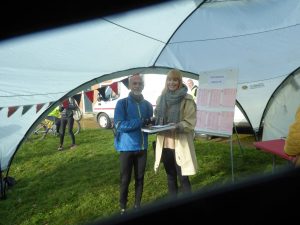 Securing victory in the MV50-54 category, Gary Woolnough was pleasantly surprised to earn himself a new 10 mile PB, finishing in a superb time 1:04:21. This put him in 35th place overall and was an excellent result considering he hasn’t really done in major races since the London Marathon back in April.

Gary ran most of the race with his fellow BAC team mate Chris O’Brien with the pair working together well as they progressed along the undulating road based route.

Coming off the back of his magnificent marathon PB at Abingdon four weeks ago, Chris didn’t feel he had fully recovered from his exploits and was careful not to overcook it as he negotiated his way round the course. 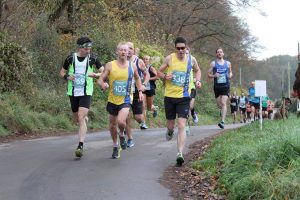 BAC team spirit: Gary and Chris ran most of the race together, both finishing comfortably inside 65 minutes

It was only the final hill that proved challenging for Chris and, since he hadn’t planned for an all-out assault, he dropped back a bit on the incline. That didn’t stop him flying down the avenue of trees for a strong finish though and he crossed the line in what turned out to be a new official PB of 1:04:28. This put him in 36th place just 7 seconds behind Gary.

Another BAC member to win a prize was Anthony Clark who, although he was the 2nd MV40-44 over the line, was still awarded the category win as Mark Smith of  Poole AC had already received a prize for coming 2nd overall. 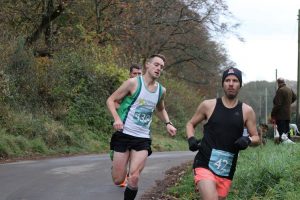 This suited Anthony fine as he took home the Farrow & Ball paint vouchers. Having been ill all week prior to the race, Anthony wasn’t even sure he was going to run. He felt a bit better on the morning of the race though so decided to give it a go.

His original plan was to set at 60 minute pace, but Anthony was aware that Lee Dempster of Lychett Manor Striders was targeting a sub 58 minute PB. Ant decided to make it his mission to help Lee achieve his goal. 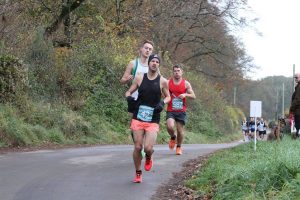 Reaping the benefit of having Anthony alongside him, Lee ran extremely well, sealing a terrific new PB of 57:44 which put him in 3rd place. Ant followed in just after to take 4th position in a time of 57:50. 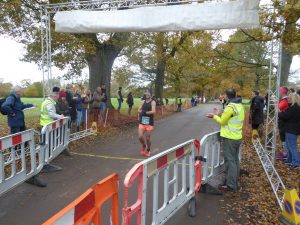 Anthony crosses the line in 4th place overall in a time of 57:50

The race was won by Craig Palmer of Littledown Harriers, who finished an incredible time of 54:55. Craig has been running for Bournemouth AC in the Hampshire League Cross Country fixtures recently and has been a massive help to the team with two superb displays thus far.

Before he turned up for training with BAC 6 months ago, 1:15 for a 10 miler would have been an aspiration for Mike White. His form has improved dramatically since though and that culminated in a PB of over 3 minutes at Wimborne. This gave Mike a finishing time of 1:12:22, putting him in 93rd place.

It is always nice to see some of the relatively new members of the club flourishiong off the back of the Tuesday and Thursday night training schedule that team captain Rich Nelson devises.

Having thoroughly enjoyed the Wimborne 10 course, Mike is now eagerly looking at future road races he can do to keep his good form going and chase down some more PBs.

The Wimborne 10 represented a step up in distance for Kirsty Drewett as it was her first attempt at a 10 miler. She took to it remarkably well and felt comfortable throughout. In fact, she classed it as her strongest and most controlled run to date. 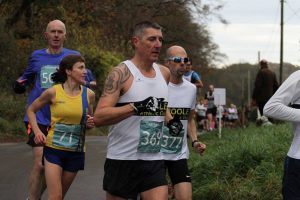 Taking 5th place in the MV55-59, Jud Kirk had a decent return to form, clocking a time of 1:09:48. It was only two days prior that Jud found out he would be taking to the start line after Graeme Miller was forced to pull out. 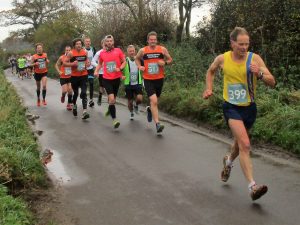 Jud Kirk is being chased by a pack of Littledown Harriers

The first 5 miles of the race went well for Jud but the wheels came off a little after that. He pushed on through though despite the tricky climb in the last mile and crossed the line in 71st place overall. 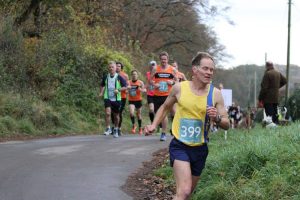