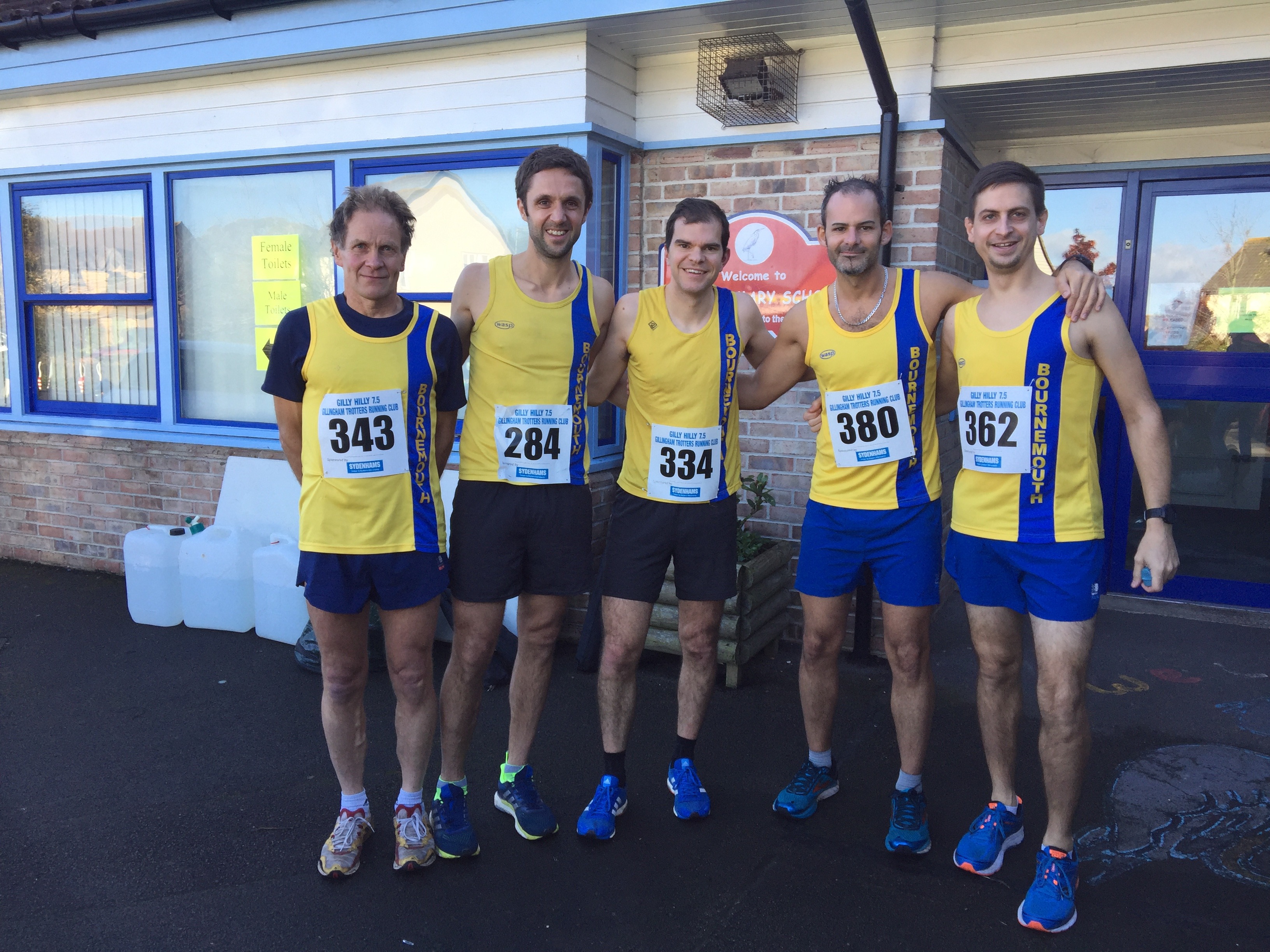 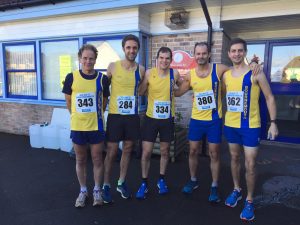 Five members of the men’s team are prepped and ready to battle the lumps and bumps of the Gilly Hilly.
Left to right: Jud Kirk, Jez Bragg, Jon Sharkey, Rich Brawn, Steve Parsons

The next Dorset Road Race League fixture was The Gilly Hilly Race, which was staged by the Gillingham Trotters Running Club. The 7.5 mile route was on undulating but very scenic country roads around the Gillingham area of Dorset.

The race has managed to maintain it’s traditional, old school Dorset feel and, as it turned out, featured a little something for everyone. That’s if you like running up hills, getting confronted by horses, colliding with hay trucks or fighting through brambles! The Gilly Hilly Race of 2017 had all that and more.

In spite of the various ‘race incidents’ that took place involving Bournemouth AC members, it was actually a very successful day from a  BAC perspective. Toby Chapman claimed the race win, getting to the line in a phenomenal time of 43 minutes 52. This gave him an 24 second margin of victory over Joseph Donworth of Frome RC, with Duncan Ward of Dorset Doddlers coming in 2 seconds later to take 3rd. 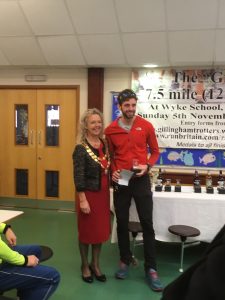 Toby Chapman collects his prize from the Mayor of Gillingham for winning The Gilly Hill Race of 2017 in an incredible time of 43:52

Bournemouth AC also collected the men’s team winners prize as well, which was decided by the cumulitive time of the top 3 runners. Toby, Jon Sharkey and Jez Bragg  claimed that honour.

Jon Sharkey took 6th place on the day with a time of 44:34 with Jez securing 9th in a time of 45:22. They could easily have been denied their moment of glory if hadn’t been for the eagle-eyed Sharkey, who spotted that they had made a mistake in the results and had in fact omitted him from the original printed list.

The race organiser Ines Braun was quick to act and manage to rectify the error and sure enough, Sharkey was back on the list and the BAC trio were awarded the prizes they rightfully deserved. 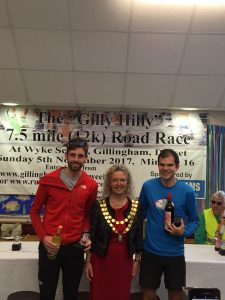 It was also 1st place for the men’s team in the Dorset Road Race League competition as well, with Toby, Sharkey, Jez, Graeme Miller and Tom Paskins finishing as the 5 scorers.

By his own high standards, Graeme didn’t have the best of races but he did still manage a 13th place finish with his time of 46:20. He hadn’t run since the interval session on the previous Tuesday so wasn’t feeling super confident about how it would turn out.

Once he’d gone through the first mile, he knew he’d be in for a tough and painful race, but he persevered and completed the race in a very creditable time, although it was 1 minute and 40 seconds slower than the time he clocked  in the same race two year’s ago.

Tom was also well off the pace by his own very high standards but he was still the 26th fastest runner over the line, finishing in a time of 47:58. Tom has had a very good season though including strong performances in the Boston Marathon, the Portland 10 and the Round The Rock 10k, as well as a famous 4 wins in four half marathons in four days at the Extreme North Quadrathon.

With all his main targeted races for year done and dusted it is understandable that Tom has eased off the training a bit and is not quite at the top of his game at the present time. That said, it was still a valuable contribution to the team effort on the day from Tom, who usually comes into his own on tough, hilly courses.

Despite the win here and the prospect of another potential win in the final fixture of the season, the Boscombe 10k, it is looking like the BAC men’s team will have to settle for 2nd place in the league this time round.

Poole AC have put together a great run of results since the Puddletown Plod back in June, winning every fixture since and have capitalised on the difficulties that BAC team captain Rich Nelson has had in getting a competitive team together.

It’s frustrating because, as performances in The Gilly Hilly Race showed, if we can get a full strength team out, Bournemouth AC are undoubtedly still the team to beat.

There could yet still be a sliver lining though, as the BAC ladies team could yet steal top spot. The league table hasn’t been updated yet after the previous race which was Gold Hill. Before that though, they were in pole position.

Despite the absence of Nikki Sandell who suffered an achilles injury in the lead up to the Bournemouth Marathon and Emma Dews as well, the ladies still managed to get a team of 3 together for Gilly Hilly, as required.

The first BAC lady over the line was Yvonne Tibble, who came in 74th place overall in a time of 55:51. Yvonne was actually the 6th woman to finish and also took the honour of 1st place in the 50-59 category.

Initially though, she was not awarded the trophy for the category win but as it turned out, the person who had been given the prize was actually a man, so Yvonne discovered about her victory later on.

This was despite an unfortunate incident where a horse reared up inches in front of her face. It was only the expert skill of the rider that prevented the horse from landing on her. The incident left her slightly shaken but she was able to gather herself and continue on.

Kirsty Drewett had her hopes of registering a sub 1 hour time scuppered when a passing Range Rover overtook her on one of the tight country roads. Unfortunately, another vehicle was approaching from the other direction. This forced the Range Rover to cut back in after passing Kirsty.

The driver seemed to forget that he was towing a trailer full of hay and the trailer hadn’t quite passed Kirsty yet which caused her to leap backwards to try to avoid it. Unfortunately she didn’t leap back far enough and the hay at the back caught her shoulder and sent her into the bushes.

To make matters worse the two vehicles were now wedged across the road without enough space for either of them to get past. This meant a further hold up as Kirsty was unable to get past the blockage in order to continue with her race. By the time she did get going again, it was too late and she’d already lost too much time to achieve her target.

She collapsed in a heap as she crossed the finish line, which is a sure sign that she’d given her all. Her time had been hampered somewhat by the hay trailer incident and she clocked 1:00:49, which isn’t bad considering her ordeal. That placed her 123rd overall and 29th lady over the line.

Completing the ladies’ team line-up and ensuring they received points for fielding the required number of team members was Louise Price.

Louise didn’t overly enjoy the race and found the hilly course tough to negotiate but she took one for team and ended up finishing in 1:05:13, putting her in 163rd place overall out of 235 finishers. She was the 52nd lady to finish.

There were several other males competing in The Gilly Hilly Race for BAC. Richard Brawn had a good run, claiming 35th place in a time of 49:15. 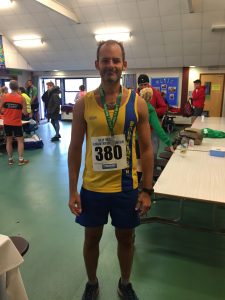 Richard Brawn put his recent increase in hill practice to good use, finishing in a time of 49:15 which put him in 35th place

Richard wasn’t signed up to the race originally but Pat Robbins had to pull out after suffering a bit of plantar fasciitis, thus transferring his number to Rich. Rich was quite keen to test himself on an undulating course after recently adding a lot more hill work into his training routine.

This tactic seemed to work and Rich was able to keep a reasonable pace throughout the consistent ups and downs of the first 4 miles. After that the course flattened out a bit and Rich was able to pick up the pace and maintain it till the end, picking up several places as he did. 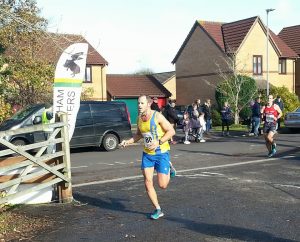 He had an Egdon Heath Harrier right behind him pushing him all the way as well which helped give him the incentive to keep pushing. He was also engaged in a good battle with Nick Berry of the Dorset Doddlers in the last half a mile of the race, with Rich eventually pulling away just before the final climb.

Two weeks after he secured an impressive marathon PB of 3 hours 10 minutes at Abingdon, Adrian Townsend was back in action. Adrian loves these kind of local races and his epic marathon effort didn’t seem to affect him much as he crossed the line a stellar time of 50:16. 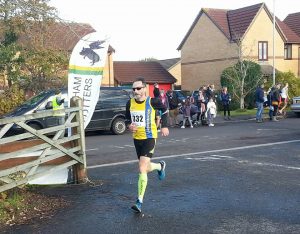 The next BAC member to cross the line was Jud Kirk, who came in 50th place with a very respectable time of 52:16. Jud usually enjoys a hilly race but even he found the undulation of Gilly Hilly a bit of struggle. Jud was exhausted as he crossed the line and it was clear to see that he’d given everything he had.

Taking 80th place, Steve Parsons crossed the line in a solid time of 56:45. Steve found himself often gaining places on the inclines but then sometimes losing them on the downhill sections. Toward the end of the race he began to tire a bit and was extremely glad to see the finish line when it arrived on the horizon. 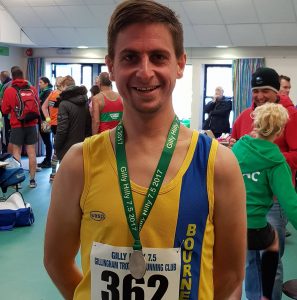 Steve Parsons found the constant undulation tough going but still managed to complete the race in a commendable time of 56:45

If there had been a prize for the over 70 category, Ian Graham would have won that. Ian had a decent run, crossing the line of a time of 1:01:14, putting him in 126th place. This was despite falling into some brambles and ripping some flesh on his shoulder.

The focus now switches to the final race of the Dorset Road Race League season which is the Boscombe 10k on 26th November. BAC will be hoping for another win to finish the season off strongly in the men’s competition and will be hoping to see the ladies’ team seal their league victory. 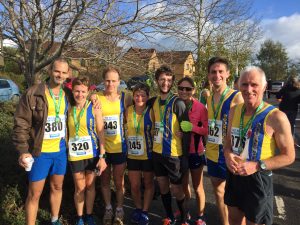