BAC out in force at Poole Festival of Running 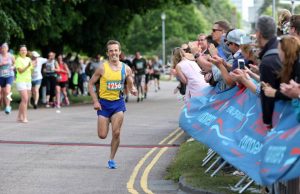 A healthy contingent of Bournemouth AC members made the short trip over for the Poole running festival and they more than made their presence felt over the weekend’s 10k and 5k races.

Jacek Cieluszecki followed up his incredible victory in the Wings for Life “run till everyone else has been caught” race with another first place finish, this time in the Poole 10k. Jacek’s time of 31 minutes 56 seconds was quick enough to fend off stiff competition from Mark Jenkin of Bideford AAC who took second. 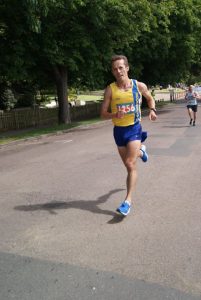 Mark has a couple of sub 31 minute 10k’s under his belt so Jacek did well to beat such a high calibre opponent. The pair were running side by side by the first 5k point but on the second lap, Jacek managed to open up a small gap on a little incline. The gap was gradually growing up to the end of the race and finished at 24 seconds. It was Jacek’s 11th appearance in the Poole 10k but was his fastest time and first win in the event. 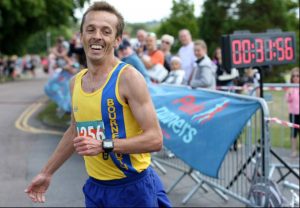 Jacek takes first place in a superfast time of 31:56

The course is a two lap route starting off at Poole Park and heading out towards Baiter and then onto Whitecliff. It’s relatively flat with just the one small hill on the return journey from Whitecliff just before the road descends underneath the railway line.

Conditions were warm but with a very strong breeze. The 10:30am start made the race a bit more manageable than last year when it started at 2pm. It was incredibly hot at that time, undoubtedly causing some of the runners to suffer from heat exhaustion.

Despite not running as competitively as he used to since his son Ruben was born, Jon Sharkey was still able to put in a very strong performance finishing in a time of 35:09. 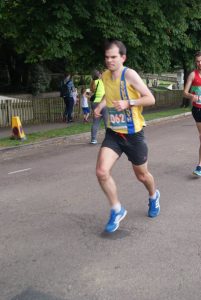 Jon had overtaken Alex Goulding when Alex’s pace started to drop at around 7k.  A few others also went past Alex at this point. Fortunately, following a rallying cry from Rich Nelson on the side-lines, Alex summoned up some strength for the final 1.5k and managed to claw some places back. He couldn’t catch Jon though and had to settle for 12th place, with a time of 35:15. 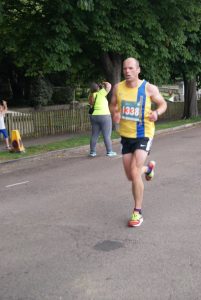 This put Alex in 2nd place in the M40-49 category and was over a minute quicker than his time last year. Jacek, Jon and Alex also claimed second prize in the team competition, behind Poole AC, although the top three from both teams were pretty much equal on paper.

Next to finish for BAC was Billy McGreevy, who came 21st with a time of 36:04. Considering Billy had competed in the 5k race the day before, this was a superb time. In face, this, together with a 5th place finish in the 5k in a time of 17:15 , earned Billy a trophy for coming 3rd in the 5 and 10k combined. 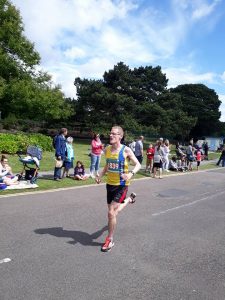 With a time of 36:23, Graeme Miller followed shortly after Billy in the 10k, crossing the line in 24th place. This significantly eclipsed the target Graeme had set himself of under 38 minutes and showed that he’s making excellent progress on his road back from a tumultuous time with injury. 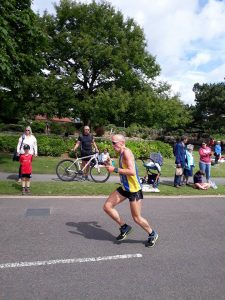 Finishing just three places after Graeme,  Tom Paskins set himself a new 10k PB with a tremendous time of 36:26. Unfortunately there was a bit of a mix up with the numbers and Tom was put down as a Poole AC runner at first, which as he pointed out afterwards, pretty much amounts to scoring an own goal. Thankfully this has been rectified now and Tom does feature in the results. 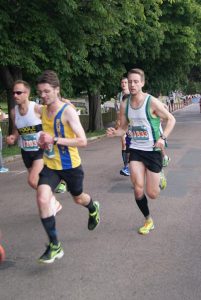 Although he’s not in quite the form he was last year in this event, Sanjai Sharma still put in a good shift, finishing in a time of 37:33. This put him in 37th overall and 2nd in the M50-59 category. Also in good form on the day was Paul Consani, who finished in 39th place with another magnificent time of 37:39. 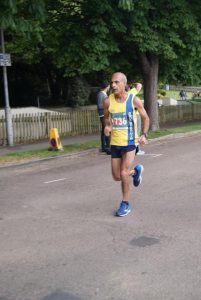 Jud Kirk also put in good performance, clocking a stellar time of 41:06, which was something close to the time he was expecting. He ran the first 5k very well in 20:15 but didn’t quite have enough in the legs to maintain that same pace for the second half of the race. Jud came in 97th place overall and 9th in the M50-59 category. 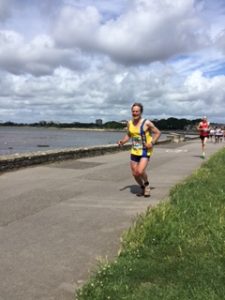 Jud Kirk makes his way down the path by the lake

After his hip tightened at around 3k, Steve Cox was tempted to pull out but to his credit he kept going, despite knowing the injury would slow him down significantly throughout the remainder of the race. Despite the pain, he still managed to finish in a respectable time of 43:34. 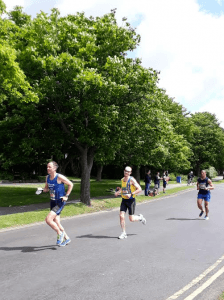 The first lady to finish for BAC was Yvonne Tibble, who crossed the line in a time of 44:48, putting her in 205th position. Yvonne was also first home from the F50-59 category. 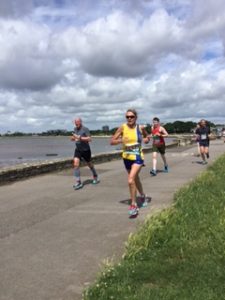 Yvonne seals a 1st place finish in the F50-59 category

Next up was the other BAC lady in the running, Tamzin Petersen . Tamzin set off quite quickly, going at around her usual 5k pace. She fell away a bit towards the end as the fast start caught up with her but still came out with a decent time of 46:08. This put her in 259th place out of 1,106 finishers and 15th in the senior female category. 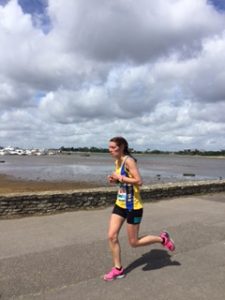 Tamzin holds on well after a fast start to finish in 46:08

In the 5k that was held on the Saturday at 5pm, as well as Billy McGreevy, Bournemouth also had representation in the shape of Wayne Lyle. Wayne was first a BAC member in 1979 but moved away and has been running for different clubs. He’s now back at BAC, although he doesn’t live locally. 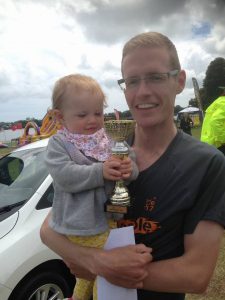 Billy collects his trophy for 3rd place in the combined 5k and 10k races, although his daughter seems more pleased with it than he is

Wayne finished in 6th place, one behind Billy, with a stellar time of 18:31. He felt he could’ve gone a little faster as well had it not been for so windy out there. All-in-all, it was a very good day for BAC athletes across the board. 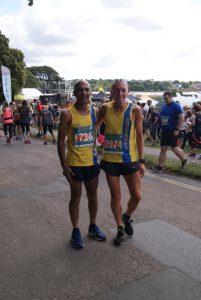