BAC pull together for Purbeck 10k 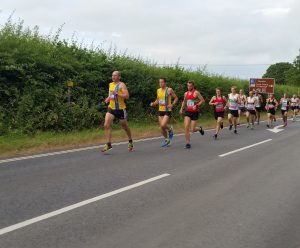 The Purbeck 10k saw a successful return to the scoreboard in the Dorset Road Race League for Bournemouth AC after Rich Nelson managed to scrape a mens’ team together at the last minute.

A week prior to the event, only four BAC men had signed up, but with a little bit of wheeling and dealing Rich managed to draft in Stuart Nicholas and Jez Bragg to bolster the team significantly. As usual, the ladies had managed to get a team together so they were good to go.

The course was a lollipop style out and back route but as it was fairly undulating throughout it was tricky to get the pacing right. In the first 3k there was a long downhill stretch which of course then turned to an incline in the latter stages of the race. They were also running into a headwind on the return approach which also contributed to the significantly tougher second half.

Stu Nicholas was first home for BAC, finishing in 6th place with a very quick time of 35:43. Stu set off at a very quick pace which he found difficult to maintain for the rest of the race. He knew the hill at the end was deceptively tough though so kept a bit in the tank for a strong finish.

Stu doesn’t run 10k races all that regularly and it turned out that his finishing time was actually a 30 second PB. He had originally planned to stay close to Alex Goulding, since the pair had done a fair bit of training together on Tuesday nights in the lead up to the race.

Unfortunately Alex wasn’t in top form though after suffering from a recent illness that he’s found very difficult to shake. Despite that though, Alex still manufactured a top ten finish, which in such a competitive field is still a very good achievement. Alex came in 9th place with a time of 36:25, putting him 2nd in the V40 category.

Jez Bragg and Tom Paskins were pretty close to each other throughout the whole race. It was a bit of a shell shock for Jez to be running at 6 minute mile sort of pace after his recent exploits in the Dragon’s Back Race. The Dragon’s Back Race was a five day mountain event, covering a total distance of 315km, so that was all about endurance and entailed running at a much steadier pace.

Despite that Jez adapted well to running at the faster pace and even had enough energy left to out-sprint a fellow Dragon’s Back competitor Dave Jones of Poole AC. He also held off Tom Paskins as well, who crossed the line in the same time as Jez in 37:20, although Tom’s chip time was actually two seconds quicker. Jez came in 15th with Tom in 16th.

Tom initially found it hard to get going, since it was a Friday night race which is slightly out of the ordinary but he soon managed to settle into a rhythm. He was very pleased with his performance given the consistent undulations and enjoyed the lovely views of Corfe Castle that could be seen en route. Tom was also particularly impressed with the post burgers as well, as he made the post of the opportunity for an essential post race refuel. 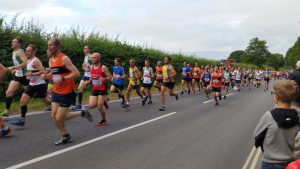 Tom Paskins in the blue t-shirt next to Sanjai Sharma, with Jez Bragg on the inside, all finishing in scoring positions for BAC

The fifth scorer the mens’ team was Sanjai Sharma, who posted a very solid time of 38:45 to claim 40th place overall and 4th in the V50 category. Although it was his slowest 10k for quite a while, Sanjai had been running on tired legs following a very busy week so he wasn’t too disappointed with his performance.

Completing the line up for the mens’ team was Steve Parsons, who finished in 154th place with a time of 46:46. This was still fairly high up in the standings in a field of 470 finishers.

Due to a undulating nature of the course, Steve found it hard to get any rhythm but he was pleased with the end result after having recently been out for three weeks with an injury. Even though Steve is still in the process of getting back to full fitness, he still managed to knock 1 and a half minutes off his time from last year. 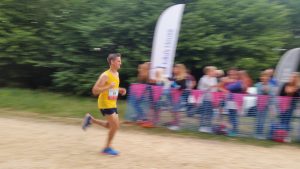 Steve Parsons cruises to a 46:46 finish, beating his time from last year by a minute and a half

In the womens’ race, Emma Dews finished in 2nd place with a stellar time of 39:32. it was Emma’s first race since October last year and he felt she struggled a bit, particular in the second half of the race where the hills and the headwind came into play.

Her first 5k was very quick, completing it in 19:04 but the pace fell away slightly in the second half of the race, which she did in 20:28. This resulted in a fair few people overtaking her, including the lady who came in 1st place, which was a bitter pill to swallow for Emma.

Emma tends to go into local races with a ‘win or bust’ mindset so is always disappointed when he she doesn’t come out on top. She still enjoyed the social element of it though as the team gathered in the pub afterwards for a post race refreshment.

Yvonne Tibble was locked in a battle with Carol Jones, the lady who finished 1st in the V55 category last year. This time it was a different story though, as Yvonne came out on top, sealing yet another category win in a time of 46:15. This was 20 seconds quicker than Carol. Although it wasn’t a quick time by her standards, Yvonne was pleased with the result. Carol, on the other hand, was not. 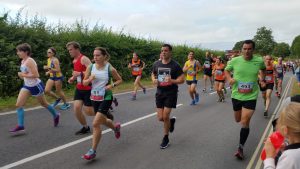 Kirsty Dewitt on the outside left, Tamzin Petersen just obscured by 351 and Steve Parsons in the middle of the road

Tamzin Petersen also put in a strong performance, finishing as 19th placed lady out of 204 in a time of 47:45. Tamzin was a little disappointed as her time was significantly slower than what she did in the Poole 10k earlier in the month but that was to be expected, given the substantial uphill sections and the crosswind throughout the second half of the race. Tamzin had also been away in South Africa earlier in the week meaning her preparation hadn’t been ideal going into the race. Given that, she should be fairly pleased with the outcome.

Kirsty Drewett was 34th lady over the line, completing a reasonably successful outing for the women, all-in-all. Kirsty ran a strong out leg, going through the first 5k ahead of schedule. The second half of the race she found tougher, losing around two minutes, although her splits for the second 5k were fairly even so she was pleased with her improvement in that respect.

It would appear that the mens’ team finished in 3rd place on the day and the ladies team were 4th, although that is yet to be officially confirmed. 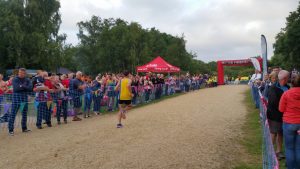