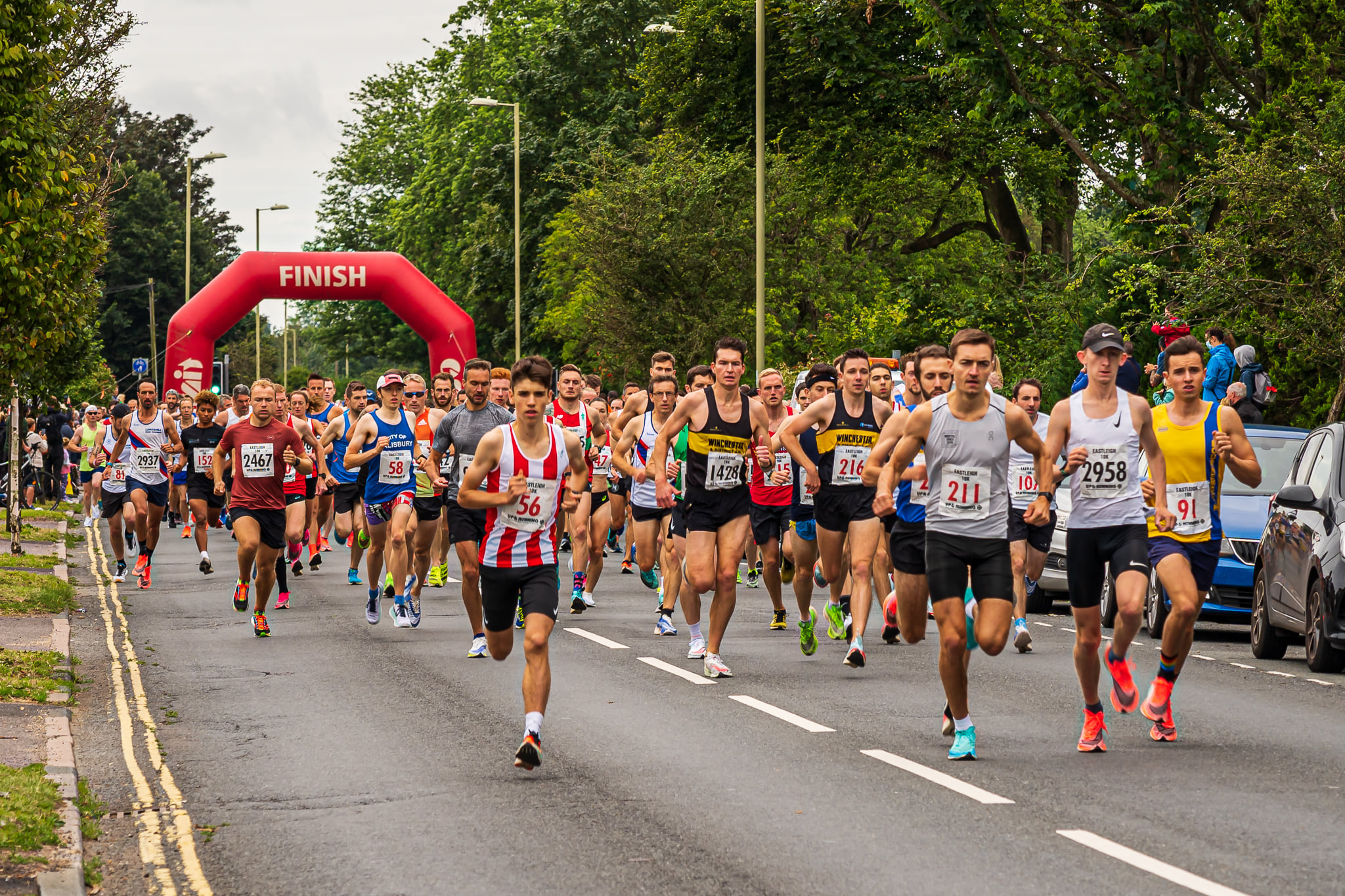 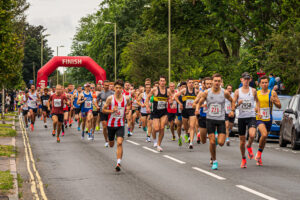 After a string of cancellations, delays and postponements, the Hendy Eastleigh 10k finally took place, bringing back that irrepressible sense of racing against the masses in its truest form.

That’s what runners have been missing out on for so long now. The opportunity to stand side by side with friends and foes on the start line and feel that amazing adrenaline buzz you can only get from racing against others in person.

In truth, the Eastleigh 10k just wouldn’t have worked in virtual form or with staggered starts. It needed the circumstances to allow for everyone to set off together in unison and that was a long time coming. But for some of the Bournemouth AC members taking part, it was well worth the wait.

One BAC man who was eager to test himself in a fast 10k road race was Harry Smith. After recent duathlon and triathlon wins and a fantastic victory in the MK Rocket 5K where he recorded a new course record of 15:02, Harry’s form was at an all time high.

That gave him much reason to be optimistic going into the Eastleigh 10k. He was joined in the race by a star studded line up of Bournemouth AC compatriots including Ant Clark and Adam Corbin. 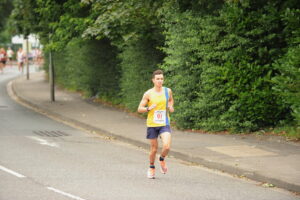 After showing some tremendous pedigree of late, Harry was excited to see what he bring to the table

Ant had been running pretty well of late and had been getting back onto quite high mileage in the previous couple of weeks leading up to Eastleigh.

Showing some terrific form of late, Adam was hoping or a standout performance. Since training resumed at BAC, he’s been going extremely well and complimenting his obvious talent with hard work and dedication. 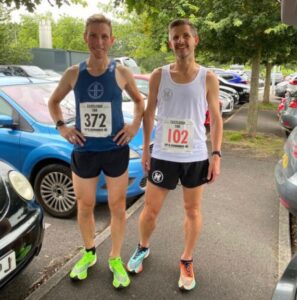 Adam had already recently recorded a 10k PB of 34:48 at the Egdon Easy 10k but he had high hopes of improving on that time further at Eastleigh.

Another BAC man in action at Eastleigh was Trev Elkins. Trev had been training very well of late and came off the back of a good win in the Ferndown 5K at the end of June.

Having recently got married and with his wife Gemma having just given birth to a baby boy, Trev had gone through some big changes of late. Despite suffering some severe sleep deprivation, he was determined to give the race a go though. 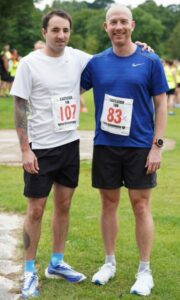 Completing the line up for BAC was one of the club’s top female runners in the shape of Emma Caplan. She had been training quite hard for the Ironman 70.3 in Weymouth in September so she was in reasonable shape but had been finding it difficult to get as much in as she would like due to family commitments

The previous weekend she’d taken part in the Conti Thunder Run 24 hour event as well where she’d covered a distance of over 50 kilometers over the 24 hour duration. That would have taken a lot out of her so Eastleigh would be a good test to see how quickly she could recover. 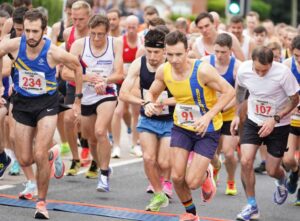 When the race started it was Harry Smith who was the closest to the front out of the BAC runners. He got swept up in all the excitement of the mass start and went out at a ferocious pace.

Looking to make sure he wasn’t left running on his own, he went along with the lead group which resulted in a very fast first mile of 4 minutes and 52 seconds. 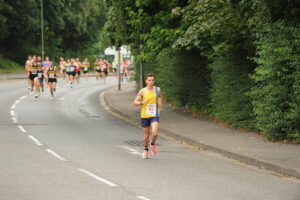 Harry made a very quick start recording a 4:52 first mile

He then backed off a bit and settled in with another runner for the majority of the race. His second mile was still very quick at 5 minutes per mile.

At the half way stage of the race he began to struggle a bit having not been training a great deal recently and with no specific 10k training as such. 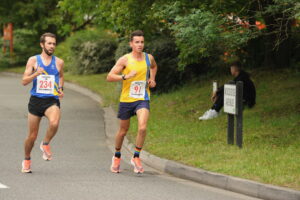 The third mile of the race does contain the only real incline of the course so it was to be expected that that mile was a touch slower. Getting through that at 5:16 pace, Harry was still well on course for a sub-32 minute time.

Over the second half of the race Harry did suffer a bit due to the fast start he’d made and that included getting a stitch at the 6k point. He still managed a 5:08 fourth mile though and then a 5:17 for the fifth. 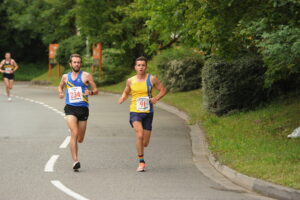 It was now just the final mile and a quarter remaining. Feeling very good in the latter stages of the race, Harry finished with a 5:07 for the sixth mile and a ran the last 0.24 miles at 5:06 pace.

That saw him reach the line in a time of 31:55, which was enough to see him take 5th place in the overall standings, out of 1,390 participants. 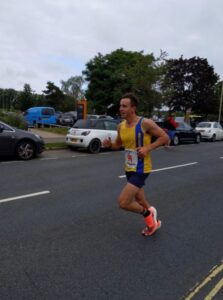 It was a terrific result for Harry and he was delighted to have achieved his target of a sub 32. He still feels there’s plenty of room for improvement though so there should be some exciting times to come from Harry. 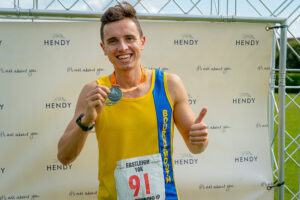 Harry certainly earned his medal after such a stunning performance

Adam Corbin was quite nervous at the start of the race but he got into it after the first mile. Opening with a 5:20 and a 5:23 for his first two miles, he was looking well on course for his fastest ever 10k time. 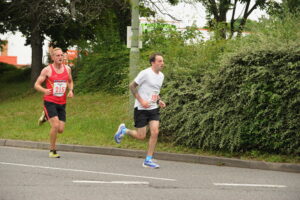 He lost a bit of pace on the slight incline on the third mile but gained some back on the way down to complete the mile in 5:34. Maintaining a very good consistent pace over the second half of the race, he clocked a 5:23, a 5:25 and a 5:28 for his last three miles. 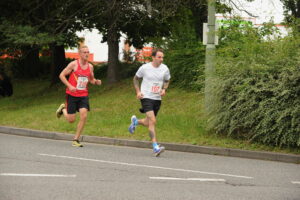 That left just the final 0.22 to go and Adam stayed strong and kept his pace well to cross the line in a magnificent time of 33:49. That put him in 23rd place overall, just ahead of Brian Underwood of Poole AC and a second behind Steven Yates of Twemlow. 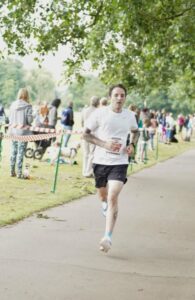 Adam cruises in for a brilliant PB

With an average pace of 5:26 for the run, it was a performance to be proud of for Adam and he was over a minute quicker than he was at the Egdon Easy 10k. It was great to see all the hard work he’d been putting in recently pay dividends. 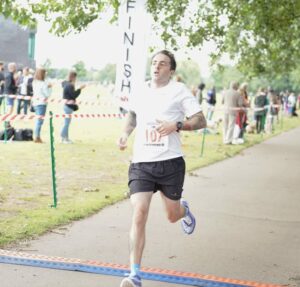 Adam will now turn his focus to marathon training after being the lucky recipient of the club spot for London in October and he’s certainly got a good base to work from.

Another BAC man to record a terrific new 10k PB was Ant Clark and he recorded a time of 33:27 to finish in 17th place on the leader-board and 4th in the Vet Male 40-44 category.

It came as a nice surprise for Ant as he wasn’t really expecting it and it was actually at Eastleigh back in 2015 that he’d actually recorded his previous best 10k time. 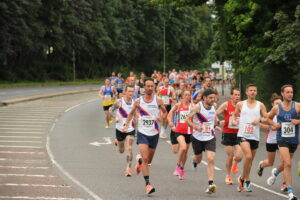 Ant Clark in the thick of the action wearing number 102

As is usually the case with Ant, his splits were remarkably consistent with all of them being between 5:20 and 5:25 pace, demonstrating a very strong, controlled performance. 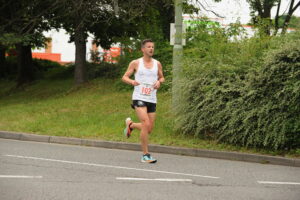 Also recording his best ever official 10k time, Trev Elkins who battled well despite the lack of sleep to reach the line in 37:24. That put him in 70th place overall.

Although it wasn’t quite as fast as he would have liked, it was still a decent effort from Trev under the circumstances. He just didn’t really feel like he had the energy to race it flat out. 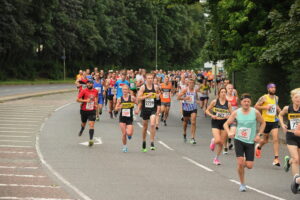 Next up for Trev it’s the Southampton Half Marathon and he’ll be hoping he can go there and record a time that will do justice the hard training he’s been putting in. 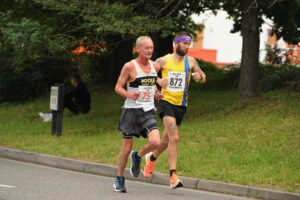 After the five 10ks she’d got through the previous weekend, Emma Caplan found it a struggle the whole way round at Eastleigh. Nevertheless, she still managed to rally well and got the job done, completing the course in a time of 38:36. 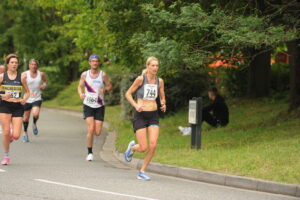 Emma Caplan was glad to only be running one 10k this time!!

That put her in 90th place overall but she was 9th quickest woman in the race and finished first in the Vet Female 45-49 category. Given her recent exertions, that wasn’t a bad result for Emma. She did say though that she found the Eastleigh 10k harder than all five of the ones she did the previous weekend. 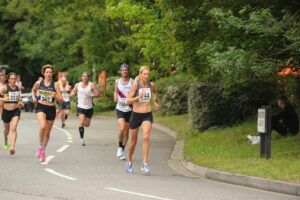 Emma races to a 38:36 finish which made her 9th quickest female

Ben Brown of Southampton AC  picked up the race win, finishing in a blistering time of 30:44. Jacob O’Hara was 2nd in 31 minutes exactly, with Kurt Taylor taking 3rd in 31:10.

William Boutwood of Winchester was 4th, recording a time of 31:36. Then it was Harry, finishing 6 seconds in front of George King in 6th. 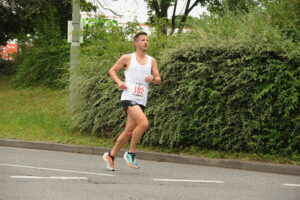 Ant’s pacing for the race was spot on, showing remarkable consistency

Matt Brown of Littledown Harriers had another brilliant run to finish in 8th place with a fantastic new PB time of 32:37. He’s been in scintillating form of late, winning four out of the five Upton Summer Series races so far and posting a time of 1:15:40 in the Puddletown Plod.

Naomi Mitchell of Reading AC was 1st female, crossing the line in 20th place overall with a time of 33:34. Then it was Lesley Locks of Aldershot, Farnham & District finishing in 35:20 which put her 36th overall. 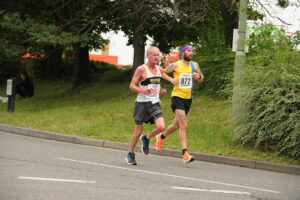 It was great to see a race go ahead with a mass start and it felt like another huge step forward as society steadily returns to normal protocol. And with the standard of runners that Bournemouth AC have in their ranks at the moment, that can only mean more opportunity for them to showcase their talents. 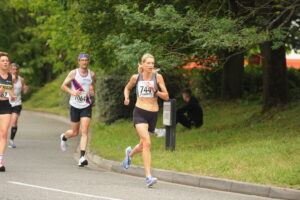