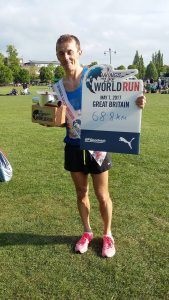 Bournemouth AC were well and truly put on the map last night on the world stage in the Wings for Life World Run with Jacek Cieluszecki winning the Cambridge race and Steve Way taking third place over in Santa Clarita, California.

The Wings for Life World Run takes place in 25 different starting locations around the world, across six different continents, with over 86,000 runners taking part.  Each of the 25 races around the globe start simultaneously, with the aim of the event being to raise money as much money as possible to find a cure for spinal cord injury.

The idea is run as far as you can before getting caught by the Catcher Car that chases the competitors down, eliminating them from the race one by one. The last person to get caught wins the race.

The English edition was held in Cambridge and that was where F1 Grand Prix legend David Coulthard was giving chase to the runners in the Catcher Car. Even Coulthard found it difficult to catch Jacek Cieluszecki though as he claimed his incredible victory, covering a total distance of 68.8km (42.75 miles). 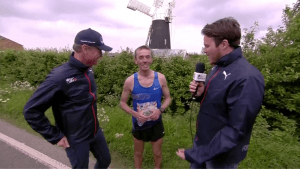 Jacek was running for 4 hours 32 minutes in total and he actually went the 12th furthest out of anyone in the world on the day. It was an unforgettable achievement and indeed a proud moment for Jacek and for Bournemouth AC.

It was actually another Dorset based runner who was Jacek’s closest rival, as Iain Trickett from Dorset Doddlers claimed the runner up spot, proving just how strong the local running club scene is in this part of the country.

The original plan was to run 40 miles (64km) but at the 55km mark Jacek decided to start speeding up and attempt to chase down the two leaders who were at the front. Amazingly, he was still running at between 6 and 6:10 minute miling, which surprised even Jacek himself.

“When I passed the first guy and then overtook Iain Trickett at around 60km, I knew I was going to win,” recalls Jacek. “It was a great feeling to win such a big event.” 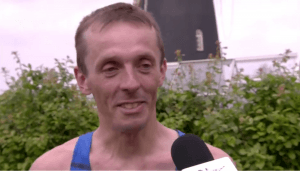 No wonder Jacek looks pleased with his day’s work

Meanwhile, across the pond, Steve Way had decided to enter the California race and again put in a magnificent effort to finish in third place, with a total of 64.87km. For Steve though, this was merely a controlled training run. He was under strict orders from his Nedbank team manager for the forthcoming Comrades ultra not to go beyond 40 miles. 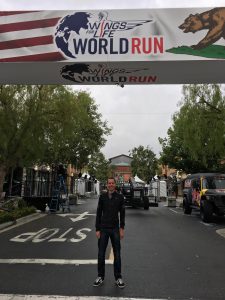 The temptation must have been there for Steve, particularly as he could’ve got a free holiday next year at any of the locations around the world if he had won the race. To his credit though, he stayed disciplined and managed to keep his eyes on the prize of his primary goal, which is the Comrades.

Steve probably thought he was onto a winner when he chose the do the race in California but ironically it turned out to be the coldest of all the locations in the end which left him cursing his luck a bit.

He actually managed the 36th furthest distance out of anyone in the world so this was still a tremendous achievement and gives a good indicator of the level he is at in these kind of endurance events.

Wings for Life is unquestionably one of the most entertaining running events to watch and it, in terms of raising money, it is also one of the most productive, with a total of 6.8 million euros being raised. This money will be put towards funding more research into finding a cure for spinal cord injury. It was good to see some Bournemouth AC members contributing so hugely toward that.