BAC stars weather the storm at the windswept Wimborne 20 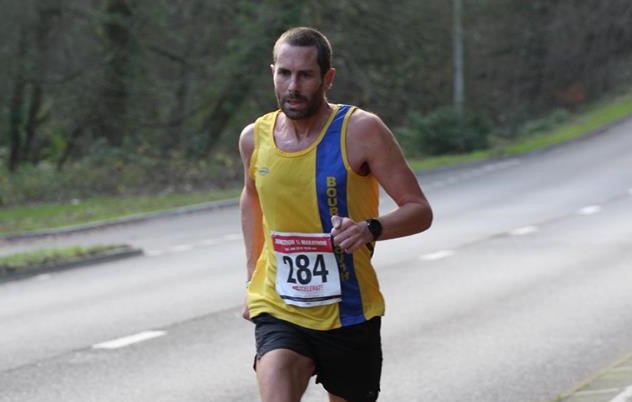 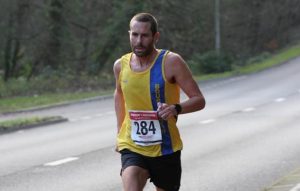 Continuing his quest towards Comrades, Steve Way was one of several Bournemouth AC runners viewing the Wimborne 20 as a piece of a much bigger puzzle

With some members preparing for Spring marathons, some striving toward those much coveted Comrades medals and others simply wanting to test themselves over a longer distance, the Wimborne 20 provided an outlet for many Bournemouth AC runners to assess their form as the winter regime roars on.

The opportunity was of course taken away last year when the race was snowed off, playing havoc with the marathon preparations for a lot of runners. Ironically, it went on to be one of the hottest London Marathons on record less than two months later.

The entries for this year’s race were carried over though so those who missed out last year and had to settle for a day of sledging and building snowmen instead got the chance to take their place this time round.

The Wimborne 20 is run along the rural, scenic roads of Wimborne, featuring an undulating profile that is a challenge in itself on any ordinary day. With storm Freya passing over though, there was the added caveat of strong winds and persistent rain to contend with, making conditions tricky for the 232 runners taking to the start line.

Amongst those taking part were Steve Way and Ant Clark who will both be featuring in the Comrades Marathon this summer and are currently undergoing rigorous schedules with that in mind.

They were planning to run together along with Chris Wood of Wimborne AC, the club who were hosting the race. Unfortunately that plan went out the window when Ant was stuck in a long queue for the portaloos before the start of the race.

Just as he finally managed to get in there, the race organisers decided to pull everyone out of the queue and get proceedings underway. Unfortunately, those who were currently occupying the portaloos at the time were unaware of this and they got left behind as the race began.

That left Ant playing catch up as he got out and suddenly realised everyone had gone off without him. He then had to revert to plan B, which was just to get round at a reasonable pace without his hamstring giving him any cause for concern.

Thankfully, he successfully managed to achieve that, keeping a good steady pace throughout the run, crossing the line in a time of 2 hours 5 minutes and 41 seconds. That gave him an average pace of 6:18 per mile and put him in 5th place. 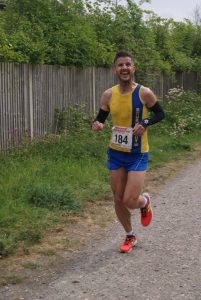 Ant Clark’s original plan was flushed down the pan when the race started without him, leaving him to play catch-up

Just up the road, Steve and Chris had already completed the course, with Steve taking 3rd place in a time of 2:02:08. That put his average pace at an impressive 6:06 per mile. Chris filtered in shortly after to take 4th in a time of 2:02:14.

Although that would be a terrific run for most runners, Steve wasn’t overly pleased with his performance and had expected to be going faster than that in a hard 20-mile training run. 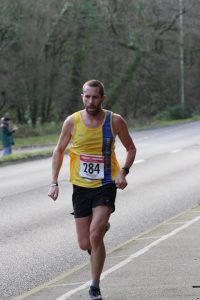 His heart rate told him that he was working hard enough though so he knew he couldn’t afford to go any faster. Otherwise, it would have been likely to have an adverse effect on his training in the aftermath.

At the moment he’s not feeling as strong as he perhaps was at this point last year but since the Comrades Marathon doesn’t take place until June, there’s still plenty of time for Steve to pull it round and get back on track. 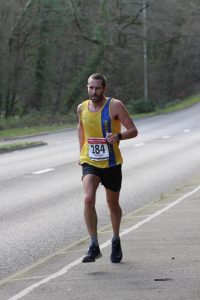 Although he didn’t run as well as he would have liked, it was a decent effort from Steve in some very trying conditions

No less than six Bournemouth AC women were in action at the Wimborne 20, with Emma Caplan, Nikki Sandell, Gemma Bragg, Kirsty Drewett, Estelle Slatford and Sam Laws all taking to the start line.

Currently training for the Boston Marathon in Lincolnshire which she’ll be taking part in in April, Emma Caplan was looking to run the Wimborne 20 in a progressive fashion.

Looking towards the London Marathon on the last weekend of April, Nikki Sandell was hoping for a smooth run to help her build some momentum and get her training moving in the right direction.

As for Gemma Bragg, she was just doing it for fun really. It would be furthest she’d ran for over year though, since she picked up a bad injury that kept her on the side-lines for quite some time.

She was really pleased to be in a position to put herself up for this kind of distance and it would represent another big milestone in her journey back to top form.

The three of them ran together for the first 10 miles of the race, having a good old natter as they went along. Emma then began to ramp up the pace, showing great strength and moving through the field well in the second half of the race. 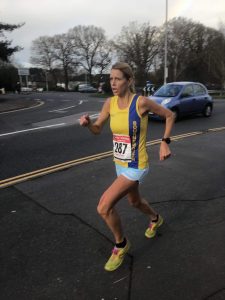 After running conservatively for the first half of the race, Emma cranked the pace up a notch for the second half and ran strongly

In the end she capped off a superb negative split to finish as 3rd lady in a time of 2:24:38, putting her in 43rd position overall. She was also 1st woman in the V40 category.

Emma has certainly been putting the mileage in in training of late and has remained remarkably disciplined in her racing, using all her experience to ensure she’s in the best shape she can be for her target race.

Also running a really good second half of the race, Gemma Bragg arrived at the line as 5th placed lady, registering an excellent time of 2:26:41. That put her 48th overall. 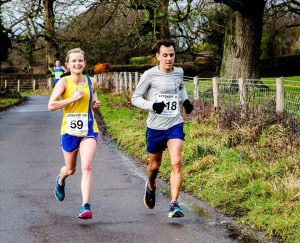 It was the furthest she’d ran for quite some time but Gemma Bragg made it look easy, cruising over the line as 5th placed lady

Gemma was surprised at how comfortable she found it having not run that far for such a long time. That certainly bodes well for her future prospects as she continues to progress.

Finishing as 10th placed woman, Nikki Sandell completed the course in a time of 2:32:34. It wasn’t quite as quick as she’d hoped for so she was a tad disappointed with the run and felt that she should have been able to crank the pace up more the second half of the race. 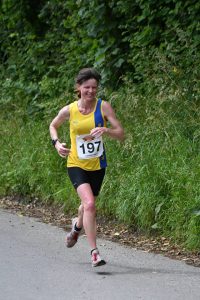 There’s still a while to go before she does her marathon though so if she can get some god solid training in between now and then, she may still be able to get close to where she needs be come race day. 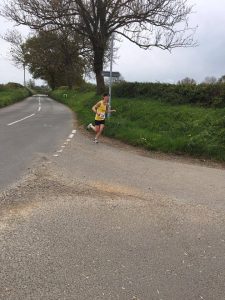 Also remaining close to each other throughout the race, Kirsty Drewett and Estelle Slatford ended up finishing in 162nd and 164th places respectively.

Kirsty really enjoyed the course and said she’d definitely recommend the event as a first foray into a longer road run. There were lots of water stations on route and the fact it was a lapped course makes it less lonely for those at the back of the field. 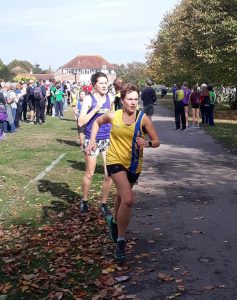 Currently in training for the London Marathon, Estelle had reservations going into the race, both about the weather and about the fact that it was a three lap route, meaning she might be tempted to stop at two laps.

As it panned out though, the three-lapped course worked out quite well as it meant, after completing the first lap, she knew exactly what to expect going forward.

Since it was quite a hilly course, she wasn’t trying to keep to a certain pace, she was just running it on how she felt and that she was able to just keep going. It was nice to have Kirsty for company most of the way as well.

Estelle’s time of 3:05:43 made her 50th female on the day and 13th in the V40 category. Last year Estelle had to defer her entry to the London Marathon due to injury so she will be looking forward to having a good stab at it this Spring. 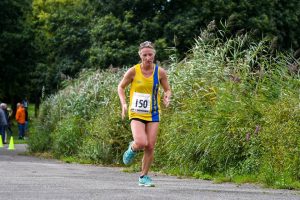 Estelle was able to push on through despite the testing hills and treacherous conditions to finish in 3:05:43

Joining Estelle on the start line at London will be Sam Laws who managed to secure a place via the ballot, much to her delight. Since January, she’s been working to a very rigorous training routine in a bid to get herself in the best possible shape for it and give herself a chance of a sub-four-hour finish.

Fighting well in a less than ideal conditions at the Wimborne 20, Sam managed not to get blown away by the wind and enjoyed the camaraderie between her fellow runners as she went along.

Crossing the line in an excellent time of 3:16:28, Sam recorded a new PB for the 20-mile distance and had every reason to be pleased with her efforts.

She was 69th placed lady and came 6th in the women’s V45 category. There were sure signs that the hard training she’s been putting in his beginning to pay off and she’s well on the road toward achieving her target in the big event. 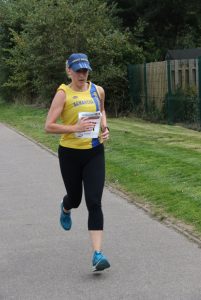 The race was won by Michael Gregory of Stubbington Green, finishing in a time of 2:01:24. He was followed by James Gilfillan who went over the line in 2:01:43 to take 2nd place.

The clear winner in the ladies race was Erica Fogg of New Forest Runners who registered a time of 2:20:12 to take 30th place overall. Francesca Rawlings of Clevedon was 2nd female in 2:23:14 which put her 37th in the overall standings.

The following day, Ant Clark did his bit for the environment, going round the course again with Chris Wood and the rest of the Wimborne AC crew to collect up all the empty bottles of drink and gel wrappers that had been cast aside by the competitors during the race. 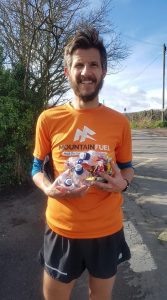 After a rubbish start to the race, Ant managed to get a decent run out of it in the end and even went round the course again the next day to help tidy up the neighbourhood