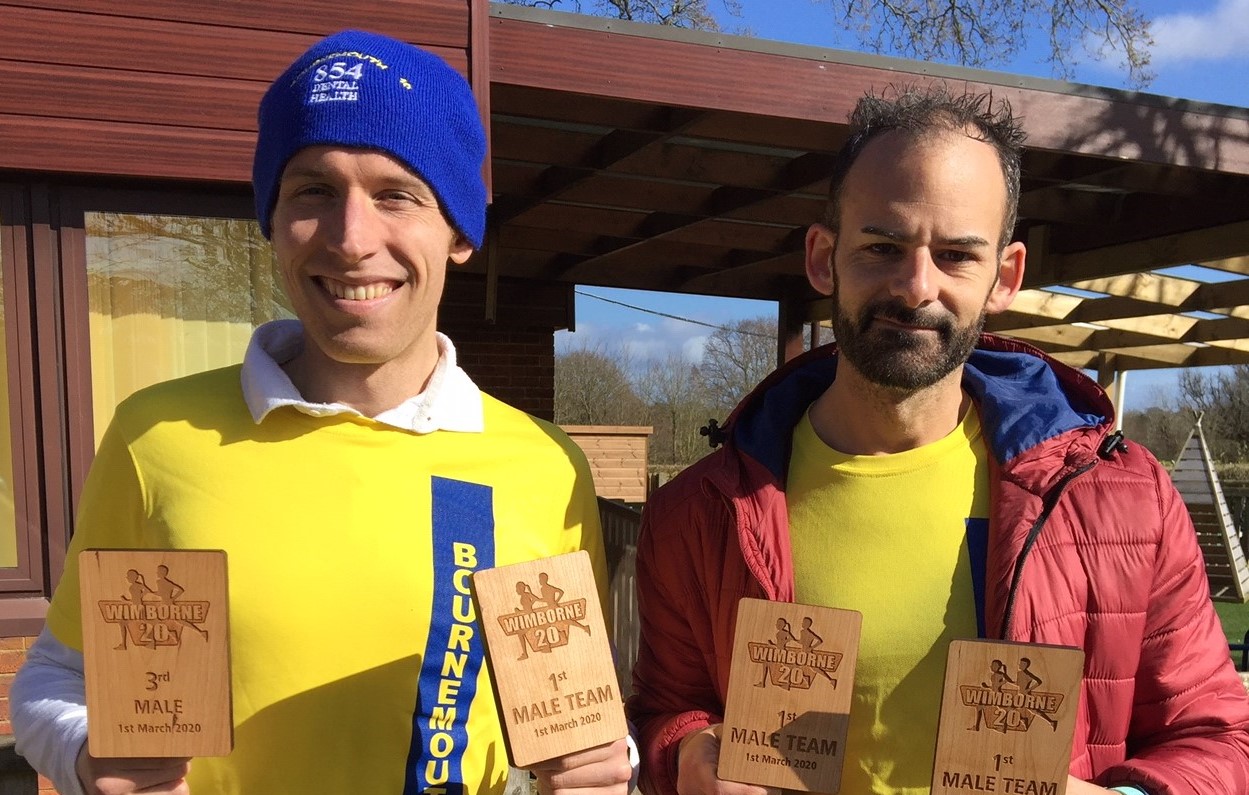 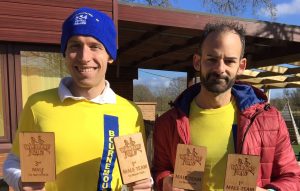 Stu Nicholas and Rich Brawn were amongst five Bournemouth AC members taking part at the Wimborne 20 along with Steve Way, Pete Thompson and Estelle Slatford

In what turned out to be a breath of fresh air in comparison to recent weekend days, the weather decided to be kind for once and that inconspicuous yellow object in the sky came out to show its face on the morning of the Wimborne 20.

With little respite from the raging storms in the build up to the race, it was nice to have a break from the cold and rain that been prominent over recent times.

That seemed to put everyone in a good mood and there was a nice vibe about the place when all the runners gathered at the race venue to prepare for the start.

One thing that is synonymous with all the races at Wimborne organised by Wimborne AC is that they have managed to maintain their old school, no frills approach to racing. You just turn up, get your number and run.

Many of those who had put themselves forward for the Wimborne 20 were in training for Spring marathons. Rich Brawn was using it as a training run as he worked towards what he was hoping at the time would be a London Marathon appearance.

Estelle Slatford was hoping the race would help her in her quest for fitness for the Paris Marathon and Stu Nicholas was building up for the Brighton Marathon which was scheduled for the week before London. All those marathons have of course subsequently fallen by the wayside in the wake of the coronavirus pandemic.

A couple of Bournemouth AC legends were also present in the field in the shape of Pete Thompson and Steve Way. Pete was also down for London and has been running very well of late and Steve was there running with his friend Tim Jones, despite insisting on his retirement from competitive racing.

There was also some good competition in the ranks amongst the women in the race, with last season’s Dorset Road Race League champion Alex Door in action, along with Diana Leggott of Lonely Goat and Emily Freeman of Poole Runners.

Before they started the race Rich was discussing his plans with Stu and Pete and mentioned that he was looking to run any miles that didn’t have hills at 6:30 pace.

When they got going Stu and Rich started off running together and Stu said he’d be happy to run with Rich at 6:30 pace so they set about doing that.

It was quite a hilly three lap course so Rich knew it would be tough to maintain that pace all the way through but he thought having Stu there would help him keep it up for as long as possible. They then got into a group with Richard Swindlehurst and the hometown hope Damian Huntingford of Wimborne AC. 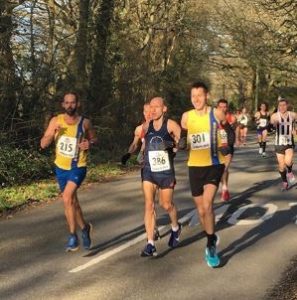 The group stayed together up until around about 11 and a half miles when the hit the hills on the second lap. Rich began to struggle at that point and started to lose tough with the group.

Once that happened Rich found it quite mentally tough to keep pushing and his pace began to drop. He was also aware that he had the National Inter Counties Cross Country on the following Saturday as well where he’d qualified to represent Dorset. For that reason he thought it might be wise to just ease off a touch for the remainder of the race and not run himself into the ground.

Stu pushed on at that point along with Richard Swindlehurst and they set about working their way up the field.

Having started off at a steady pace, Pete had begun to ramp it up a bit and before long he caught Rich up and overtook him. From that point on, Pete also worked his way up the field, going very strongly as he did. 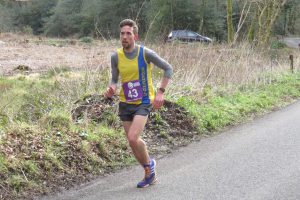 From miles 16 to 19, Rich was down to around 7 minute-per-mile pace and the constant hills had ground him down somewhat. He was overtaken by Paul Bullimore and Bruce Campbell over that phase of the race, as well as Alexander Whitting of Winchester & District.

Despite his conservative first two laps, Stu picked it up well on the third lap and finishing very strongly, working his way up to third place in the end. He finished in a time of 2:07:58, which considering he’d helped Rich out for the first 11 miles, was very impressive.

Also finishing extremely strongly on the third lap, Pete ended up crossing the line not far behind Stu, taking 5th place in a time of 2:08:07. That was enough to net him the prize for first MV35-39.

He came in just two seconds after Richard Swindlehurst who was fourth and first MV50-54 in 2:08:05. Joseph Donworth of Frome Running Club won the race convincingly, clocking a time of 2:00:28. Andy Leggott was over 2-and-a-half minutes back but he took second place in 2:03:05. 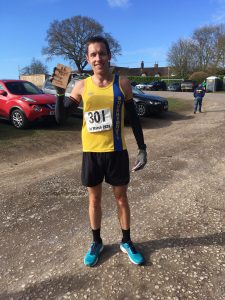 Sixth place went to Adam Slater of Bridport Runners and he was also first MV40-44 finishing in 6th place in 2:08:58. Tom Andrews had a cracking run to get over the line in 2:09:37 which earned him 7th place in the overall standings.

Running it in progressive blocks, Paul Bullimore took 11th place, crossing the line in 2:11:44. Bruce Campbell also went with a similar strategy and arrived at the finish in 13th place registering a time of 2:12:17. 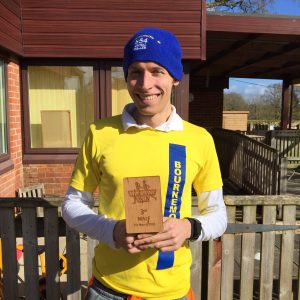 After helping to pace Rich over the first half of the race, Stu did well to work his way up to third place

After slowing substantially over the latter stages of the race, Rich ended up taking 17th place, completing the course in 2:13:01. Although he was disappointed that his levels dropped over the second half of the race, he was still reasonably pleased with his average pace of 6:40, particularly on such an undulating route.

Rich will soon get another crack at running a 20-mile race at his intended marathon pace when he takes on the Milton Keynes 20 this coming Sunday.

Despite stopping off for a loo break half the way through which set him back a couple of minutes, Steve managed to find the change of gear required to catch his friend Tim up.

That meant upping his pace considerably over the second half of the race but no doubt Steve secretly enjoyed stretching his legs for a bit anyway. He crossed the line in 22nd place in 2:15:35, with Tim coming in in 23rd in 2:15:41. 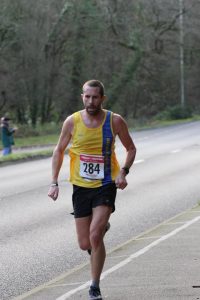 After a necessary detour, Steve Way rolled back the years in a bid to catch his mate up

Susan Duncan is Weston AC was first lady in, arriving at the finish in 28th place posting a time of 2:17:23. She was followed by Emily Freeman who crossed the line in 2:18:12 to take 32nd place.

Sarah Flanagan of Eton Manor AC was third lady and first FV 40-44 coming in in 2:21:09 which put her in 39th place. Alex Door handled the hilly course well and was next over the line, registering a time of 2:21:25. 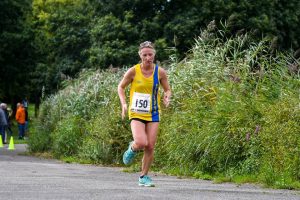 Although it was hillier than she’d remembered, Estelle Slatford did well to maintain a good pace

Managing to keep her pace fairly consistent throughout most of the race, Estelle completed the course in 3:03:35 which put her in 142nd place overall and 37th lady. That also put her in 9th place in the FV 45-49 bracket. A total of 227 runners made it round successfully on the day.

With Stu taking third place, Pete taking fifth and Rich coming in in 17th, that was enough to see the Bournemouth AC trio take home the men’s team prize. They each received a Wimborne trademark, wooden carved trophy. 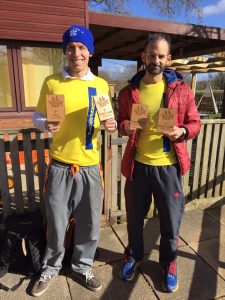 Stu and Rich formed part of the winning male team along with Pete, who had had to leave before the prizes were handed out