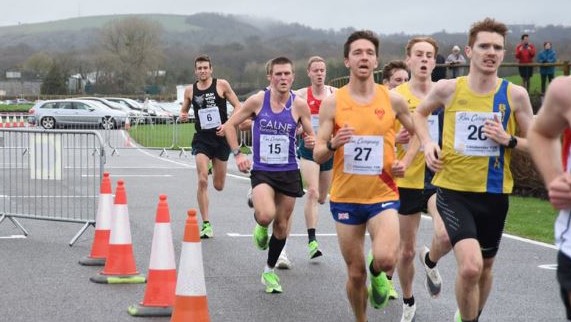 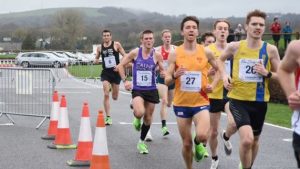 After a huge PB in last year’s race, Dave Long returned to the Chichester 10k and brought Rob McTaggart and Rob Spencer with him this time round

In a place that’s synonymous with the thrills and spills of fast-paced racing, what better setting could there be than Goodwood Motor Circuit for three of Bournemouth AC’s quickest turbo chargers to get into gear.

In fact, the talented trio of Dave Long, Rob Spencer and Rob McTaggart were hoping they would be in with a shout of taking the team prize at the Chichester 10k, which starts out at the entrance of Goodwood Motor Circuit and ends with a lap around the circuit.

As is often the case with very fast, flat races with the provisions for a big field though, the event attracts a very high calibre of athlete. In fact, some of the best distance runners in the country were there contesting including the likes of Andy Vernon.

The first 6km of the route are on public roads as the route heads past the Rolls Royce factory and along Stane Street, a historic Roman road. It then heads through Strettington and back toward Goodwood via New Road.

It was at the Chichester 10k last year that Dave Long recorded his current 10k PB of 30:01. That lopped 41 seconds off his previous best time before that which was set in the Supersonic 10k at the Bournemouth Marathon Festival.

He knew from that it was the kind of race where, if he gets a right, it could yield a terrific result. The same went for Rob Spencer and Tag as well.

They’d both put in some sensation performances towards the back end of 2019 and had been training well thus far since the turn of the year.

Tag had secured a new PB of 31:29 at the Telford 10k in December, breaking that illusive 32 minute barrier for the first time. He’d also delivered a sensational performance in the Cardiff Half Marathon to complete the course in 1:08:56.

As for Rob Spencer, he’d sealed a new PB and the Christchurch Christmas 10k with a time of 32:07 and completed the Bournemouth Marathon Festival Half Marathon in a magnificent time of 1:11:06.

Needless to say, there was a lot of potential for big performances between the three of them as they lined up on the starting grid, well fuelled and ready to go. 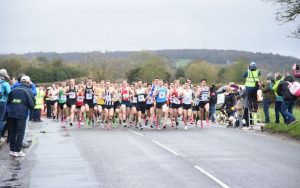 Once they’re given the green light, the competitors get their engines running and put the pedal to the metal

Dave opened with a very exuberant first couple of miles, posting a 4:40 and a 4:43 mile. He had the Barcelona Half Marathon to think about in a couple of weeks time and that was his main target race, but in such a fiercely competitive field, it was easy to get swept along.

In fact, Disco got through the first 5k in 14:45 which would have been a PB for him. 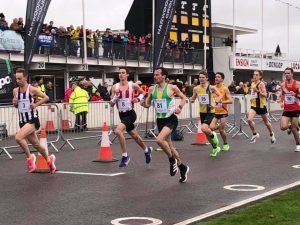 Rob Spencer and Tag ran together for the first mile, both starting off with at 4:55 pace. Rob Spencer was slightly quicker over the second mile, managing to maintain roughly that same pace and Tag went through around five seconds slower. 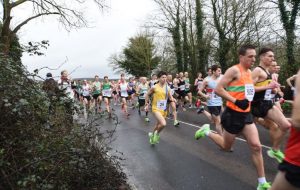 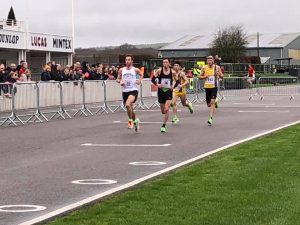 Managing a 5:03 and a 5:04 for the fourth and the fifth mile, Disco picked it up again a bit in the sixth mile to post a 4:56 before finishing strongly to complete the course in an excellent time of 30:35. 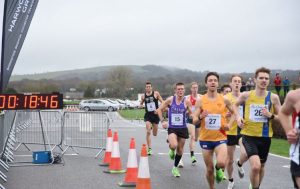 That was good enough the put him in 21st place. That might seem quite low down for a time like that but it emphasizes the tremendously high standard of field that the Chichester 10k attracts.

With one eye on the Barcelona Half Marathon, that was about the sort of time Disco was aiming for so he was pretty pleased with that effort. 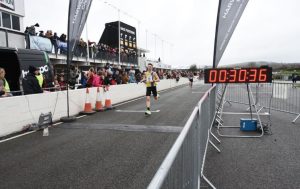 Tag dropped off the pace slightly on the fifth mile but managed to pick it up again on the sixth mile and the pair both finished strongly. 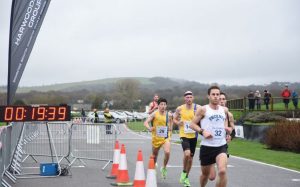 Rob Spencer went over the line in 31:35, which was a fantastic new PB for him. That put him in 32nd place in the overall standings.

Arriving at the finish 10 seconds later, Tag came in at 31:45, which put him in 35th place. Considering it was a day where he wasn’t quite feeling at his absolute best, that was actually a really good time from Tag. 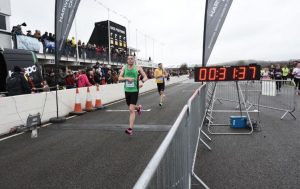 Before he managed it at the Telford 10k, Tag had been trying to manufacture a sub-32-minute 10k for quite a while, so it was good news that he’d been able to produce another one so quickly.

Tag was also feeling quite heavy legged after his exertions at the Southern Cross Country Championships at Parliament Hill the weekend before, and a long run that he did the next day.

Tag’s main focus from now onwards will be London’s Big Half in March where last year he managed a sub 1:10 time. 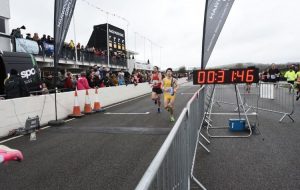 The race was won by Nick Goolab of Belgrave Harriers who finished in a superfast time of 29:01. Ben Bradley of Aldershot, Farnham & District and Own Hind of Kent AC were second and third, both completing the course in a time of 29:11.

Charlie Hulson of Liverpool AC took fourth place in 29:14, with Ross Skelton of Hastings AC taking fifth in 29:18. Jake Shelley of Shaftesbury Barnet Harriers was sixth in 29:40, before Andy Vernon came over the line to take seventh place in 29:46.

A total of 1,529 runners successfully complete the course.

In terms of the team competition, even though all three Bournemouth AC members ran so well and recorded such quick times, it was only enough to see them finish as third best team on cumulative time.

Having been the scourge of Bournemouth AC for many years now in the Hampshire League Cross Country, it was Aldershot, Farnham & District who picked the team win.

They had Ben Bradley who was second, Andy Vernon who was seventh and Alex Pointon who finished 11th in a time of 30:09. That gave them a highly impressive total time of 1:29:06.

Another club with a tendency to outdo BAC in the Hampshire League Cross Country, Southampton AC, managed to secure the second placed team position.

The BAC trio of Disco, Rob Spencer and Tag finished as the third placed team with a total combined time of 1:33:57.

This outing at the Chichester 10k will no doubt prove a good springboard for the three of them though and it will certainly be exciting to see what kind of performances they can produce in their next big target races over the coming months.