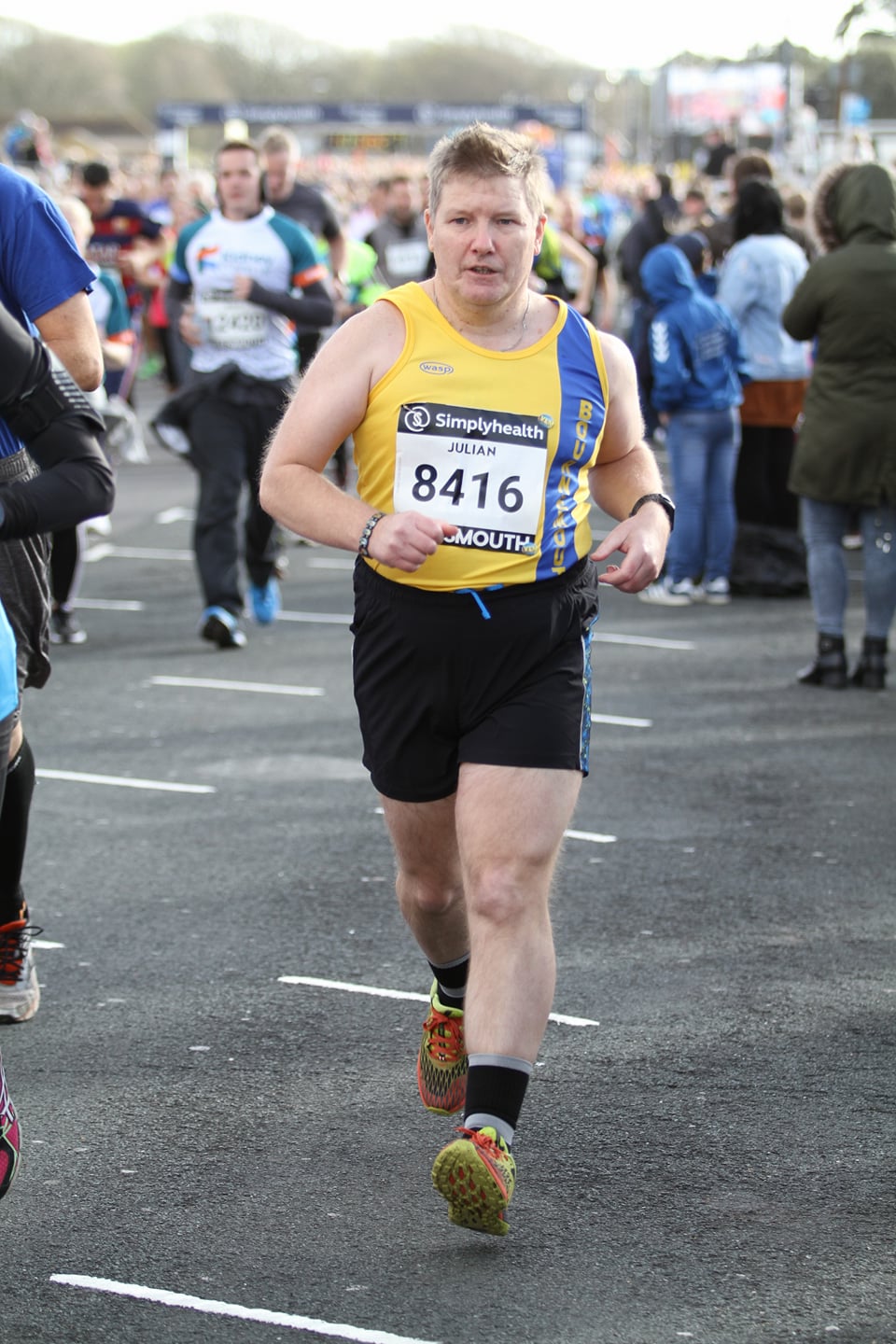 The Great South Run is considered to be the world’s premier 10 mile race and when you go there and experience the atmosphere and the huge field, headed up by some of the country’s top distance runners, it’s easy to see why.

The event has been going since 1990 the it was first created by Brendan Foster. It was first held in Southampton before being moved to its current location in Southsea, Portsmouth. The race has grown significantly in stature since the early years and now attracts over 15,000 people every year.

One man who does know what The Great South Run was like in its infancy is Julian Oxborough. Julian ran it back in the early 90’s and recalls that in those days only around 2,000 people took part. 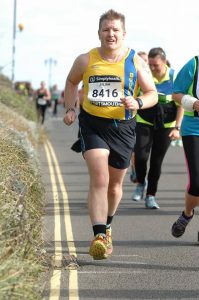 Julian Oxborough did the Great South Run back in the early 90’s when the event only attracted around 2,000 people

At the time Julian was able to complete the race in 65 minutes. After a long break from running, Julian has now got back into it and, although he doesn’t posses the speed that he used to in his youth, he still enjoy the big races. He is still competitive with his times as well and is always looking to improve.

This year, Julian was aiming to complete the course in under 2 hours 15 minutes. He hit the 5k point in 34.26, then went over the 10k timer in 1.11.27. Towards the latter stages of the race though, fatigue started to kick in and he had to battle against some negative feelings. 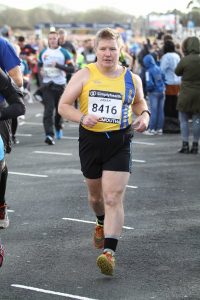 The magnificent support from the crowd helped him stay motivated though and he kept going, crossing the 15k barrier at 1:50:57. The windy conditions had really made it tough going for the last couple of miles after turning onto the seafront and this slowed Julian down a fair bit. Despite that though, he still managed to exceed his expectations on the day, finishing in a time of 1:59:35. 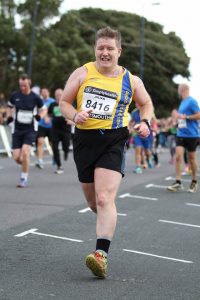 Julian grimaces as he digs in to reach the line before the 2 hour marker, despite the punishing headwind

At the front end of the field, Chris Thompson was victorious, for the second year in a row, with an incredible time of 48:32. He finished only a few seconds ahead of the chasing pack, who were Matt Sharp, Ben Conner and Alex Teuten of Southampton. Alex featured in the Hampshire League cross country race two weeks prior, taking 2nd place in the senior men’s race.

In the Great South Run, it is the elite women who set off first, 20 minutes before everyone else. That helps make it easier to watch the top ladies in the country battling it out against one another without any dilution.

The other two Bournemouth AC members in the race were Richard Brawn and Trevor Elkins. Richard had seen Trevor on the start line before the race got underway for the elite men and the masses. They discussed what time they were hoping to finish in both were looking to get around 65 to 66 minutes.

Two weeks earlier, Rich and Trevor had run together at the Bournemouth Half Marathon, along with fellow BAC member Peter Thompson. This proved a successful approach for both Rich and Trevor as they secured new half marathon PBs on the day.

As Dame Kelly Holmes sounded of the hooter to start the race, Rich and Trevor set off together, ready for another tough but exciting challenge ahead. They went through the first mile 6:25, which was about on track for the times they were looking at. 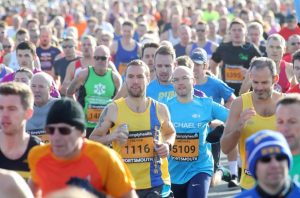 The next couple of miles were a bit quick at 6:15 and 6:11 pace. They reached the 5k point in 19:53. If they could keep that pace up they’d be in for a really impressive result, but they knew there would be more trying times to come.

They began to relax into the race a little more after that, clocking 6:22 and 6:33 for the next couple of miles to take them to the half way point. At that point they were on for a finish of around 64 minutes if they kept up that pace. But there was still the tough seafront finish into the wind to consider in the second half of the race.

They reached the 10k point in 40:12, so were still going very well at that point. The pace began to drop a bit over the next couple of miles though, with a noticeable headwind coming into play as they edged closer to the seafront.

After reaching mile 8 they soon turned onto the seafront to feel the full force of the westerly wind. They tried to follow the slipstream of a couple of other runners for a little to stay sheltered from the wind resistance.

Rich was thinking back to the latter stages of the half marathon where he wished he had began to push on a little earlier rather than leaving it to the last half a mile or so. This time, he decided to start pushing on at the 8.5 mile point.

He soon overtook a couple of the other runners who were just ahead. Trevor was finding it tough running into the wind and was unable to stay with the increase in pace.

Rich went over the 15k mark in 1:00:51, with Trevor following around 12 seconds later. It was a tough last kilometre as the wind was so strong it was hard to accelerate, even after they reached the finishing straight.

This prevented Rich from going all out for sub 65 despite being close. He crossed the line a time of 1:05:17, which put him in 275th place overall. In  field of 16,305 people, this was a pretty good result for Rich. It was also 2 minutes quicker than his previous best over the 10 mile distance, set the Great South Run the previous year. 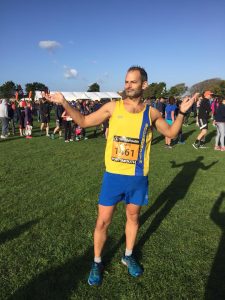 Rich topped off a great couple of weeks with a new PB of 1:05:17, which he was very pleased with, given the tough conditions

Shortly afterwards, Trevor crossed the line, finishing in a time of 1:05:42. Although he hadn’t quite managed the sub 65 he was hoping for, it was still a very good time, especially given the tricky conditions he was faced with. On another he would have probably done it. That said, it was still a terrific new PB for Trevor.

Rich attended the race with his brother Dave, who runs for Portsmouth Joggers. Dave has been a Southsea resident for quite some time now and it was his 9th year consecutive year in the Great South Run. Despite the testing wind at the end, he also posted his best time yet, finishing in 455th place in a time of 1:07:57. 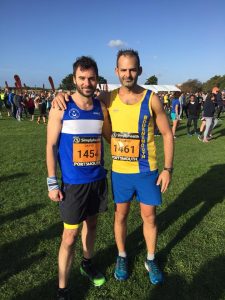 Rich and his brother Dave are regulars at the Great South Run, turning out every year for several years running