BAC trio wade through water at Round the Lakes 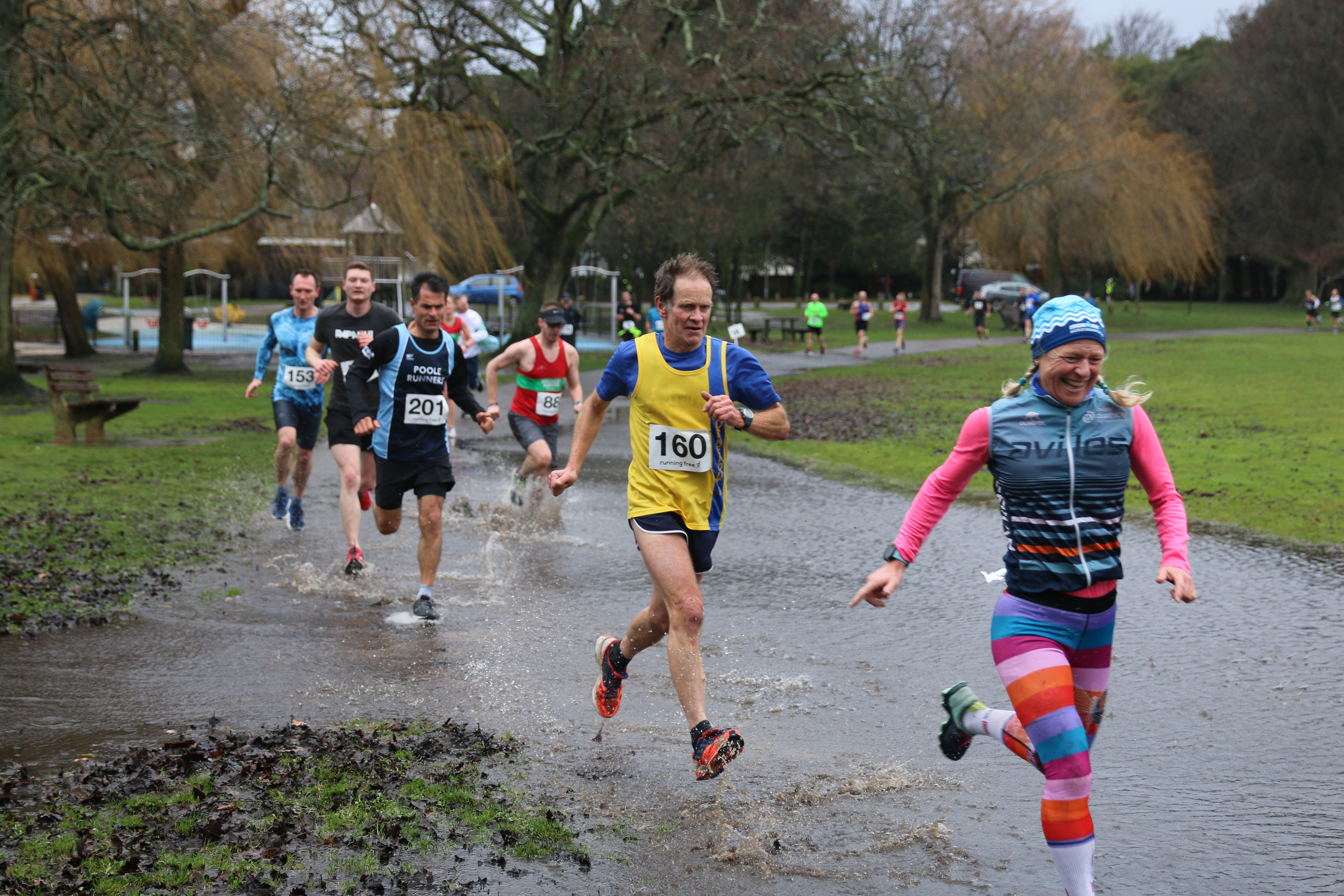 At this year’s edition of the festive Boxing Day blowout in Poole Park it was more a case of “through the lakes” rather than “Round the Lakes”.

Such was the unprecedented amount of rainfall in the days leading up to Christmas, much of the pathway around the park was looking waterlogged and washed out.

That didn’t stop the race from going ahead though and it didn’t seem to stop the 245 participants from thoroughly enjoying themselves as they splashed through the perpetual puddles.

The line up for the race included three Bournemouth AC members. Ant Clark opted to represent his second claim club which is the newly formed Twemlow Track Club. Jud Kirk was in his familiar yellow and blue colours though and Kirsty Drewett ran the race in tandom with her dad Robert. 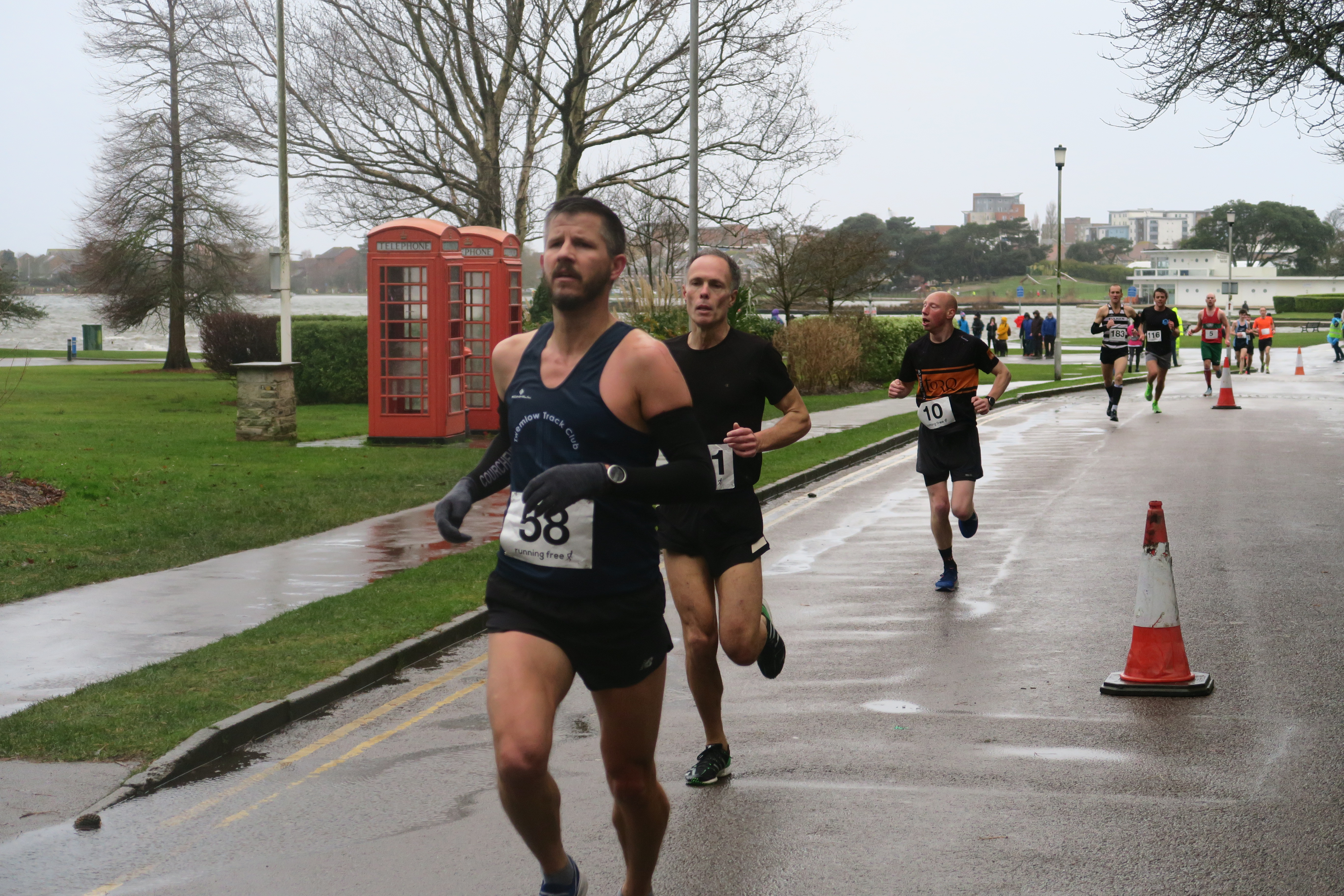 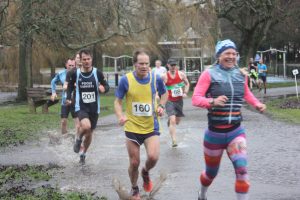 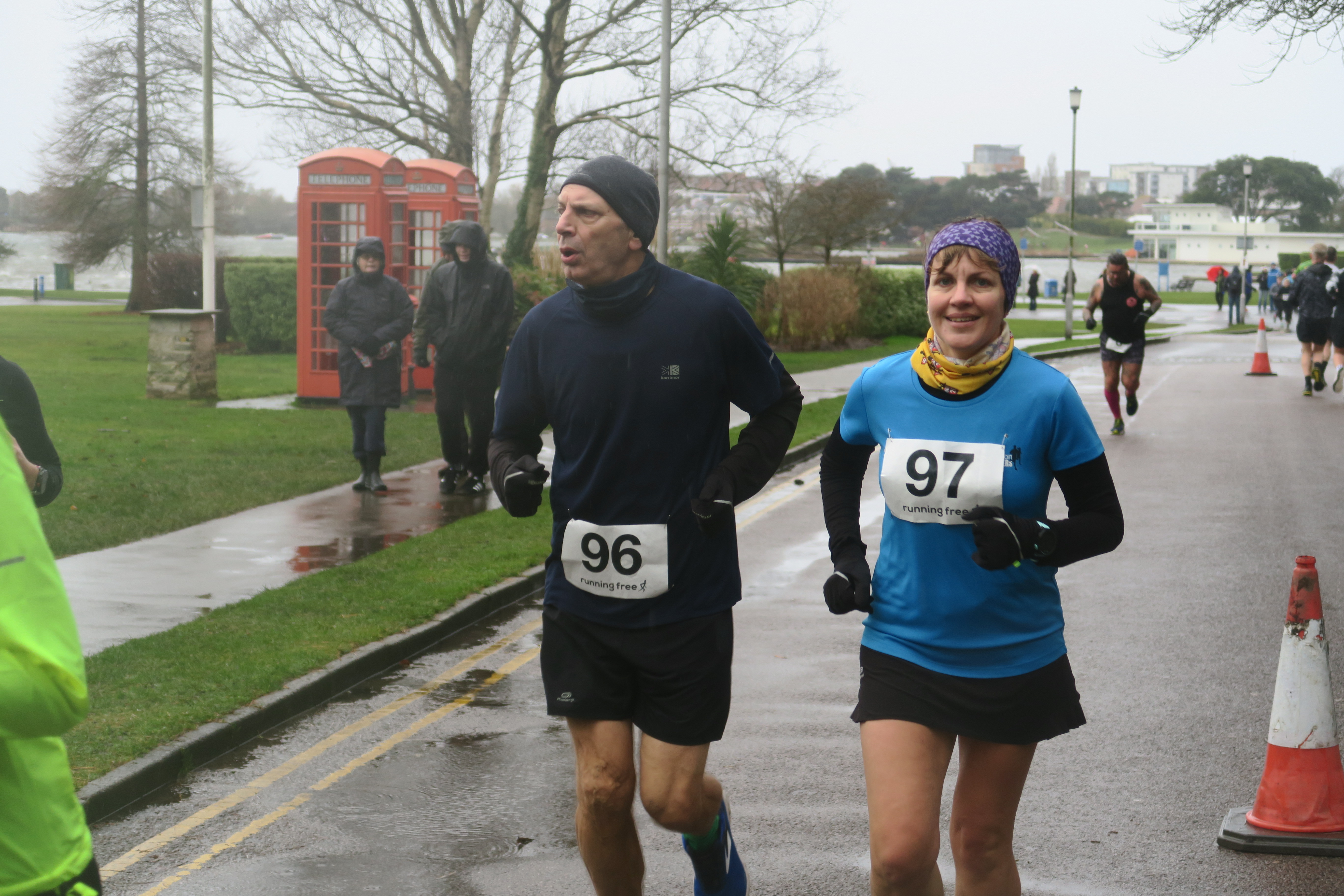 Kirsty Drewett accompanied her father Robert round the 10k course

Along with the streaming surface water that the competitors had to contend with, the weather conditions were somewhat unfavourable, with a howling wind and teeming rain dominating the morning’s proceedings.

The 10k course was based around the same boating lake and cycle track as the ever popular Saturday morning haunt of Poole parkrun. It consisted of one lap round the flooded cycle track followed by three full laps round the lake and the cycle track. 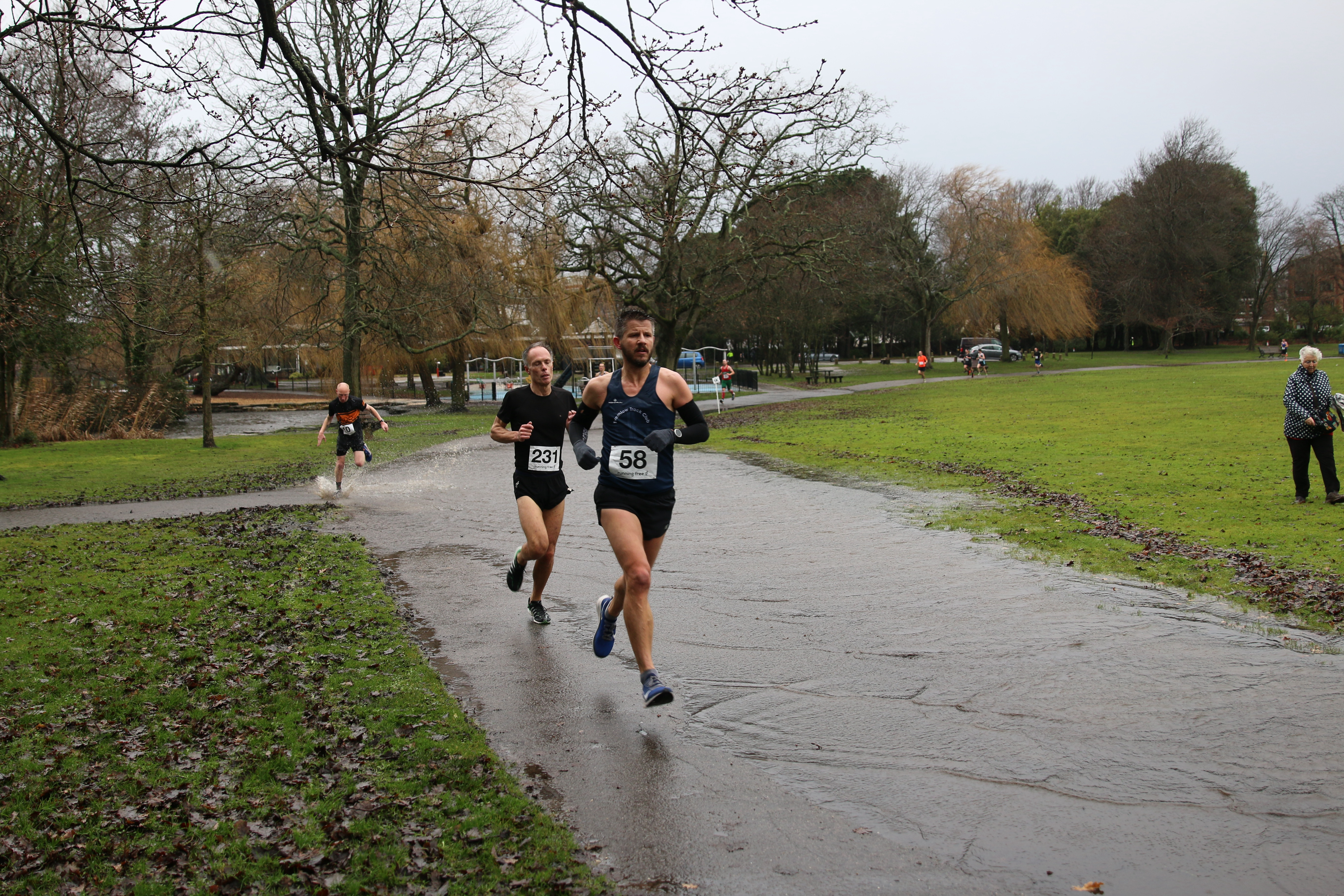 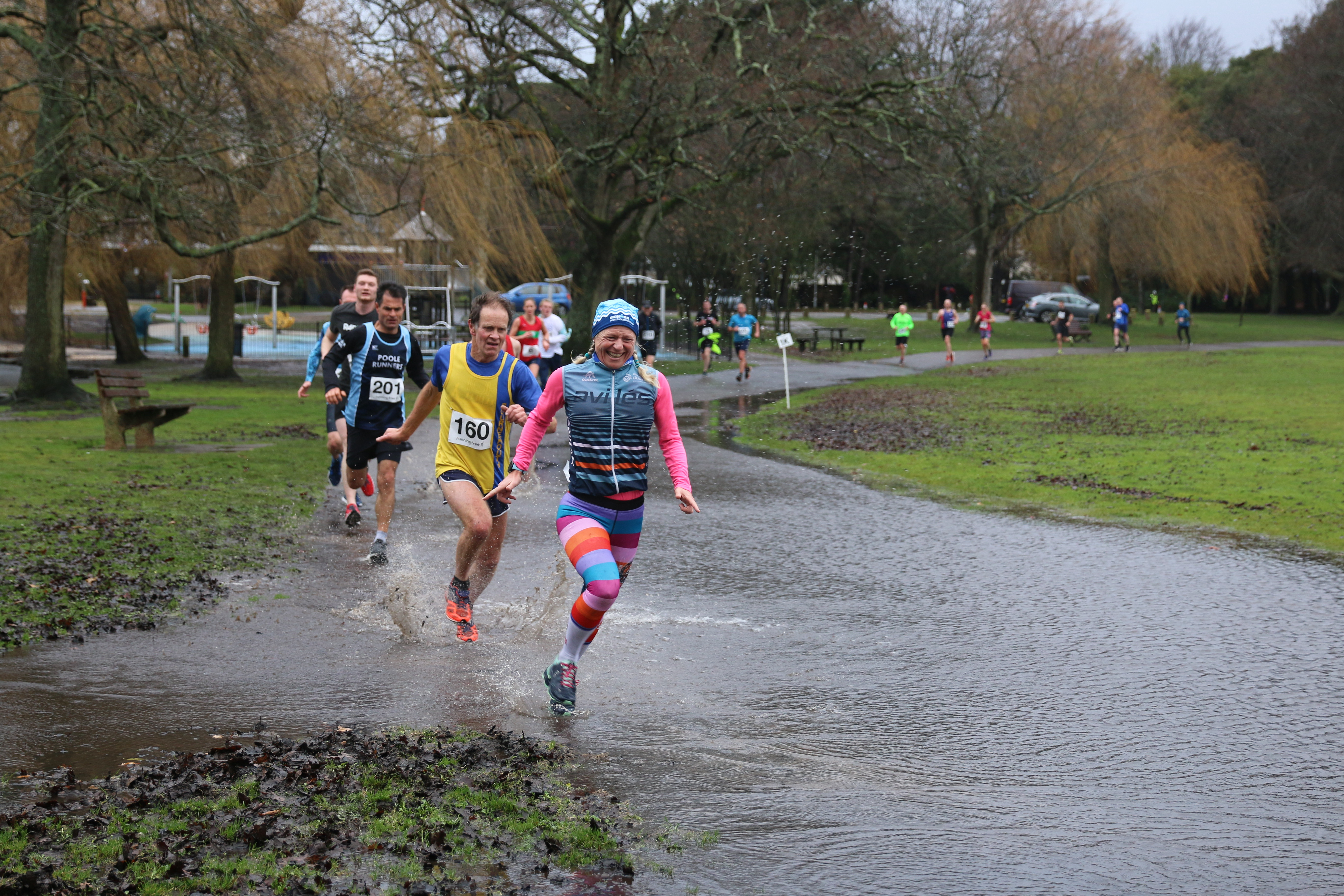 Southampton AC came over to raid the Poole party and their runners occupied five of the top seven places, with William Bryan picking up the win in a lightening quick time of 32:14.

The runner up spot went to Daniel Mulryan of Thames Valley Harriers in a time of 32:30, with Sam Costley of Southampton taking third in 32:39. 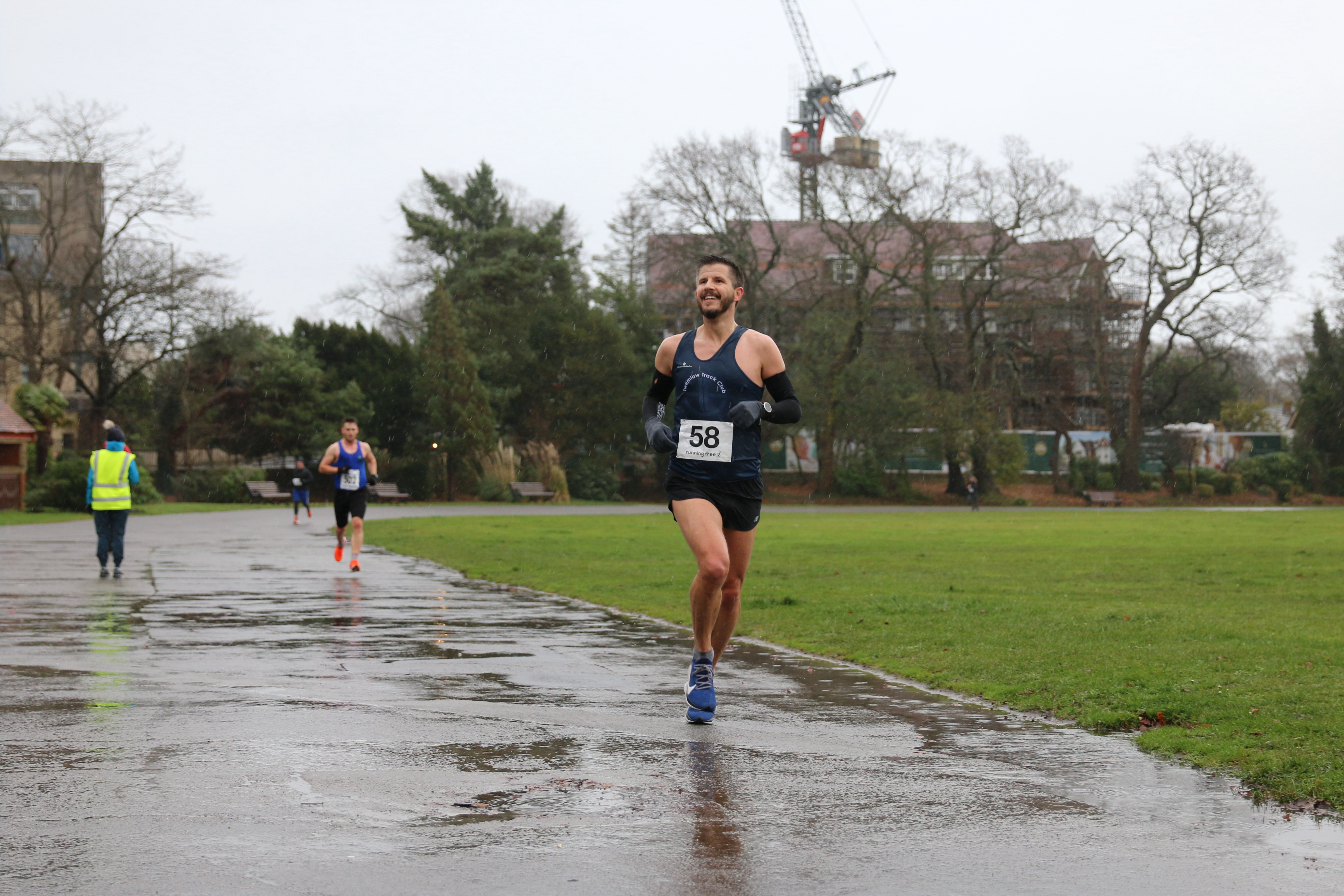 Even in seriously adverse conditions, Ant tends to run with a smile on his face 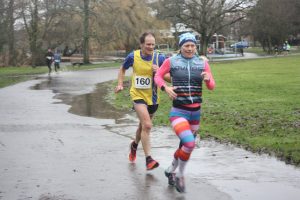 Another Southampton man, Will Brewin, took 4th place in a time of 32:49 before Callum Gillett of Reading and Rikki James, also of Southampton took fifth and sixth places, both finishing in 33:02.

Dom Willmore of Poole Runners finished 8th in a time of 34:17, with Ben Lewis of Poole AC coming in just behind him in 34:24. Andrew Ridley took the prize for first over 50, crossing the line in a time of 36:32 which put him in 15th place. 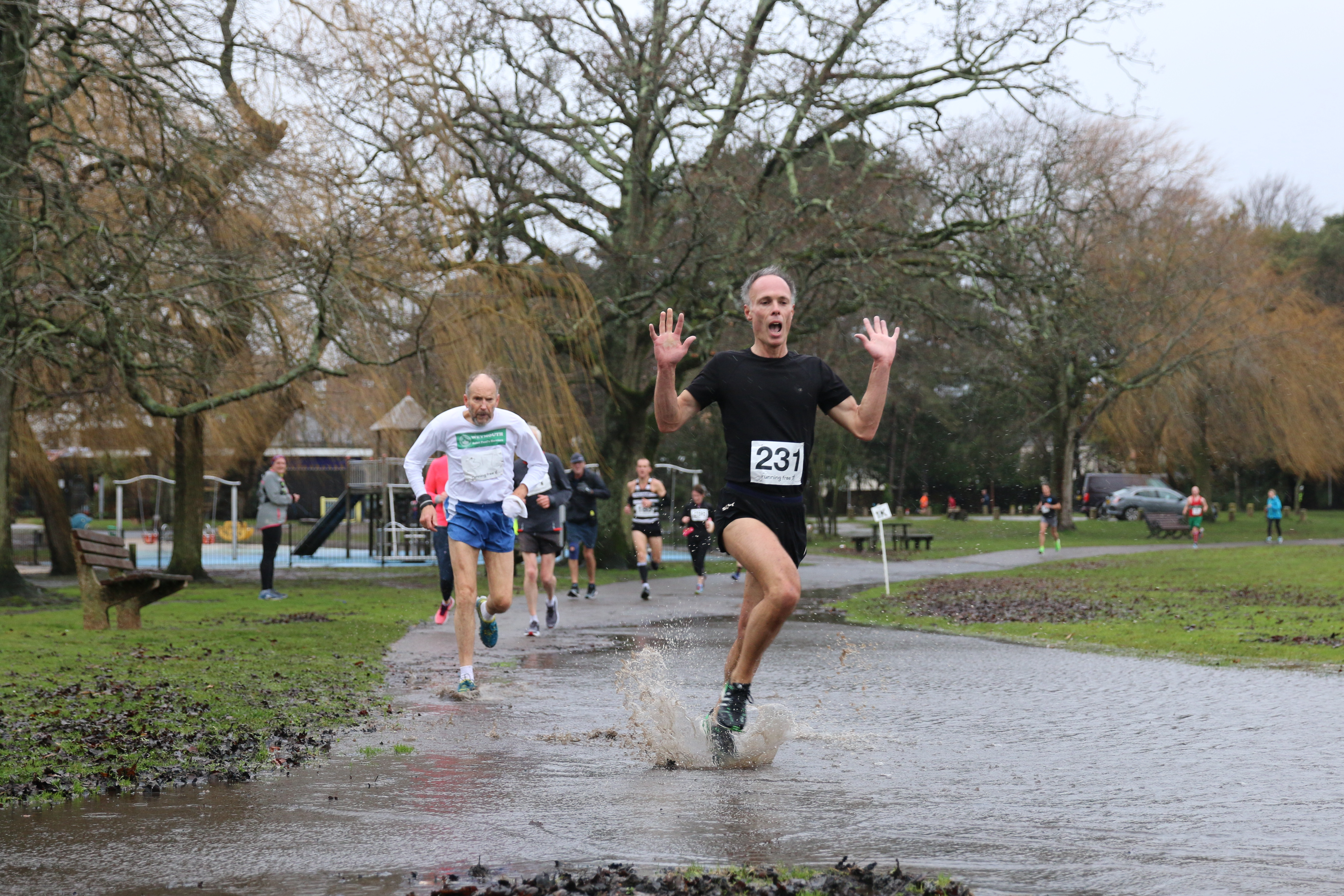 Ant Clark was the first Bournemouth AC affiliated runner to make it to the finish line, clocking in at 37:09, which put him in 20th place. It wasn’t one of Ant’s finest performances but it was another step forward on the comeback trail for him.

Before the Wimborne 10 in mid-November, Ant hadn’t raced for several months after he found out he was suffering with Epstein Barr Virus, a muscle wasting illness. 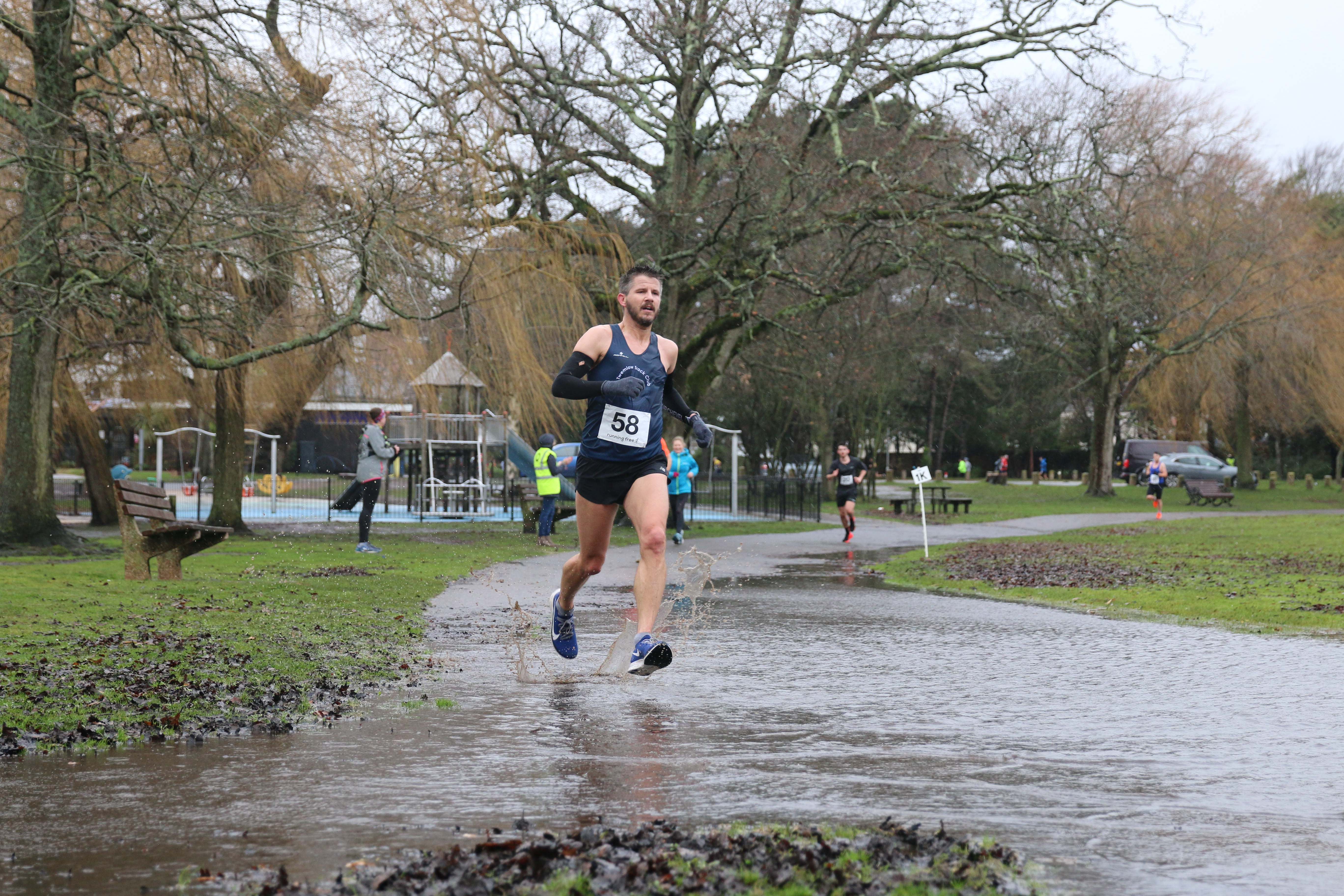 Ant wasn’t at his best but still took 20th position, registering a time of 37:09 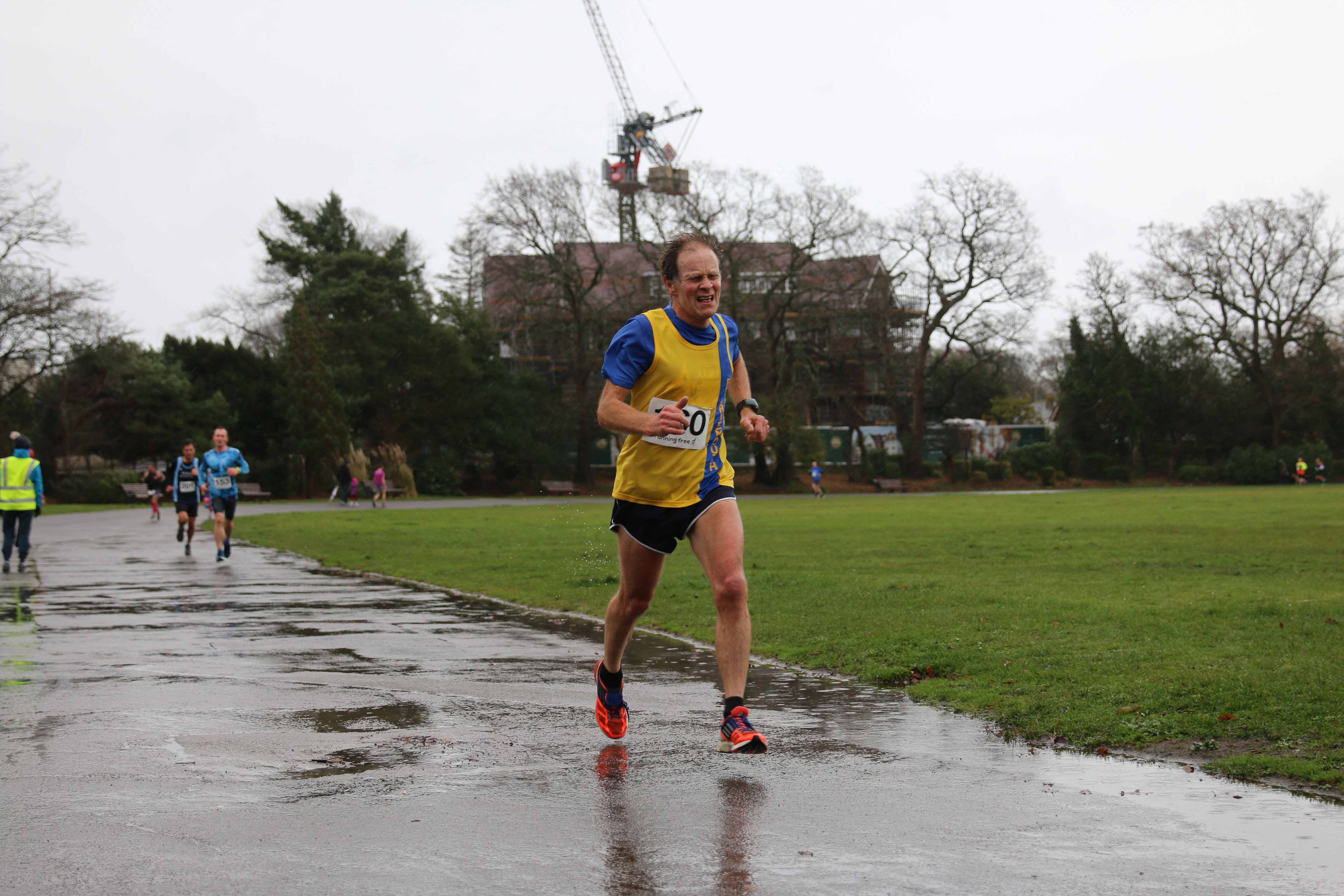 Picking up the prize for first over 60, Jud Kirk arrived at the finish in a time of 43:21, putting him in 52nd place in the overall standings. That was a decent result for Jud and it was always a welcome reward to pick up the category win. His cause may have been helped somewhat by the conditions though which seemed to keep the numbers down somewhat.

As well as being a keen runner and triathlete, Jud is also swimming coach and he said he was glad he could swim given the amount of water on the course that day. 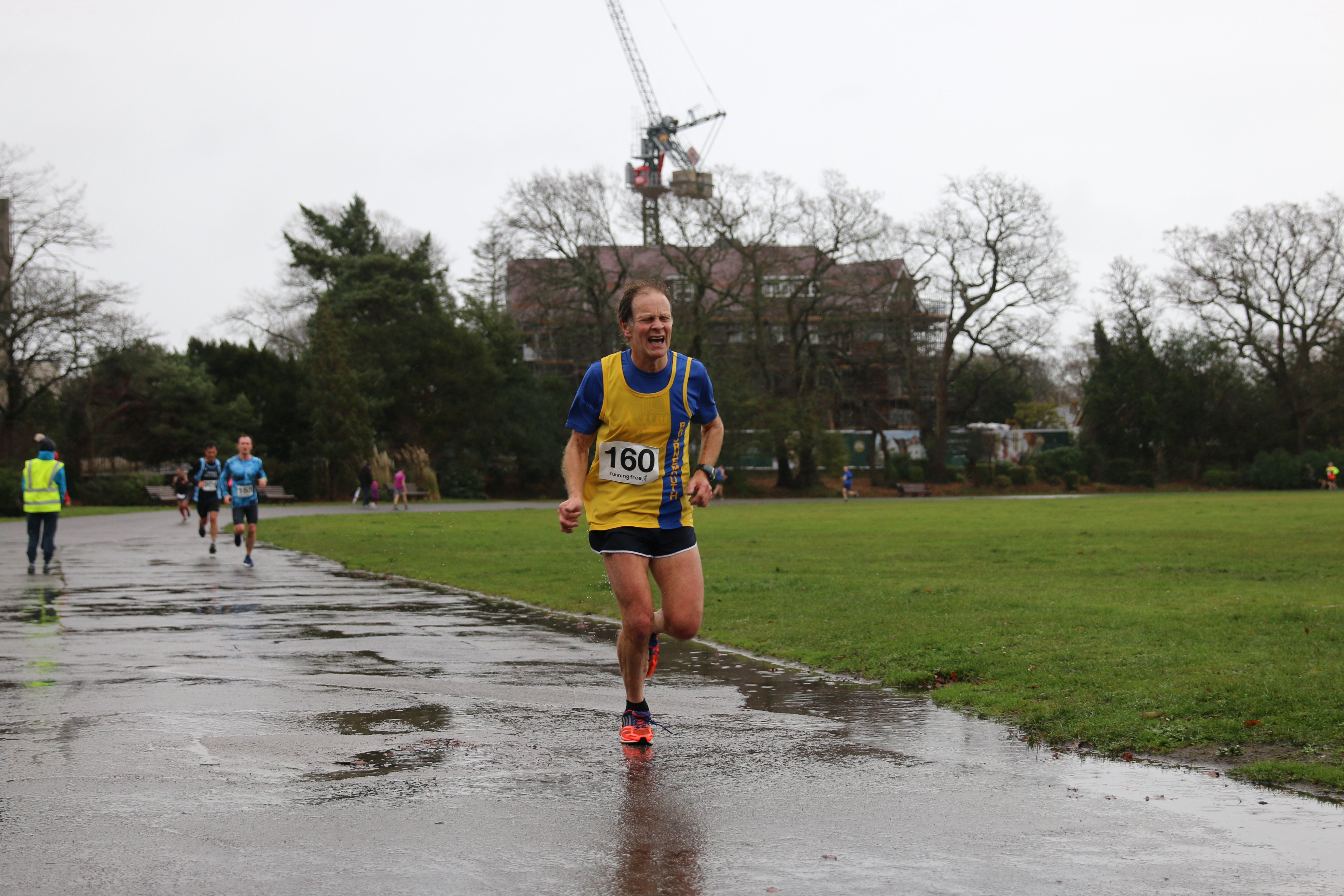 Kirsty enjoyed some precious family time with her dad as they negotiated their way through the water and the wind to cross the line 1:01:57 and 1:01:58, with Robert taking 212th place and Kirsty in 213th.

Conflicting work routines mean Kirsty and her dad very few opportunities to meet up and spend time together so it was nice that they could make the most of that chance on this occasion. 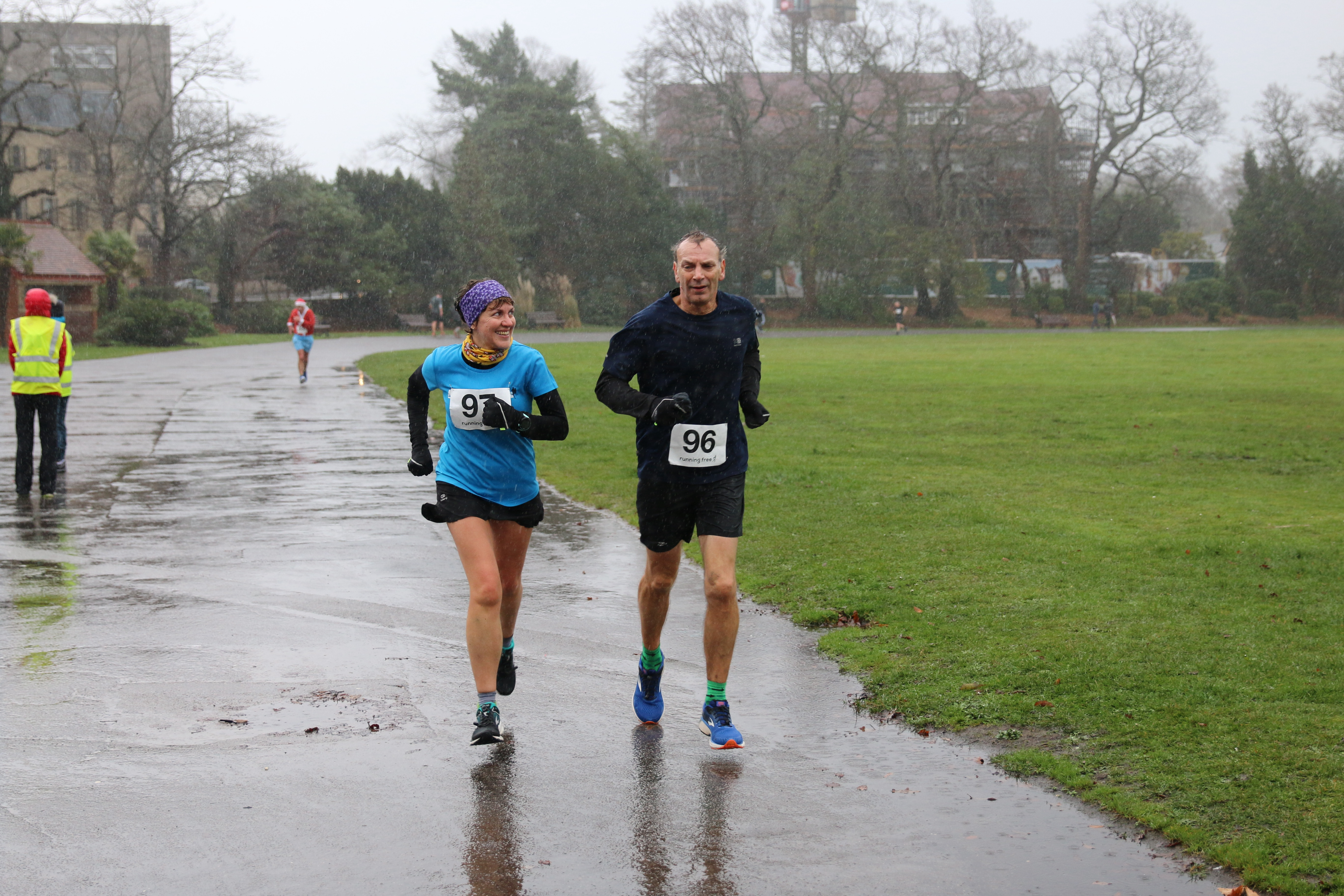 There was also a Junior Relay Race on where the youngsters were paired up with a partner via lucky dip, each running a one mile leg. Several Bournemouth AC juniors took part in that race but they were unable to stop the Poole AC pair of William Rabjohns and Leo Riggs from emerging victorious.

William completed his leg in a superfast time of 5:13 which was the fastest out of anyone. Then Leo brought it home in 6:01 to give them a team time of 11:14.

BAC youngster Oscar Matthews was in the team that came second. He raced to a superb 5:40 time in his leg before handing over to Lexie Brown of Poole AC who got round in 6:12, giving them a cumulative time of 11:52. 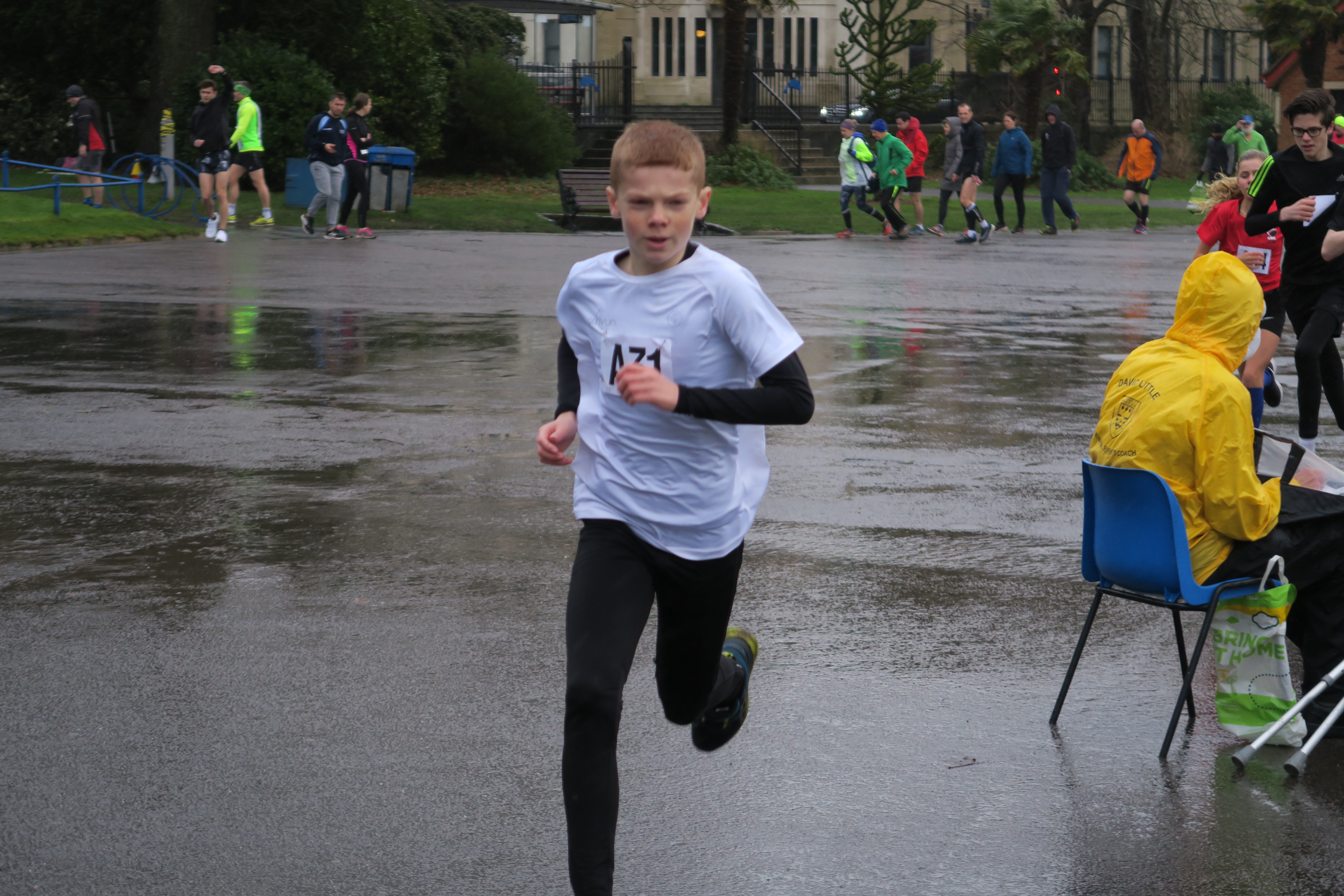 Oscar Matthews ran a blisteringly quick 5:40 mile for his leg in the Junior Relay

Another Bournemouth AC starlet, Erin Wells, was in the team that came fourth. She completed her leg in 6:36 with Izzy Rabjohns of Poole AC taking the second leg and registering a time of 6:41. That gave them a combined time of 13:17.

The other BAC member in action was Mariah Marshall and she formed part of the team that took 5th place, completing her leg in a time of 7:01. She ran the second leg, with Camilla Brown of Poole AC getting round in 6:36 before handing over the baton. Their combined time was 13:37. There were nine teams taking part in total. 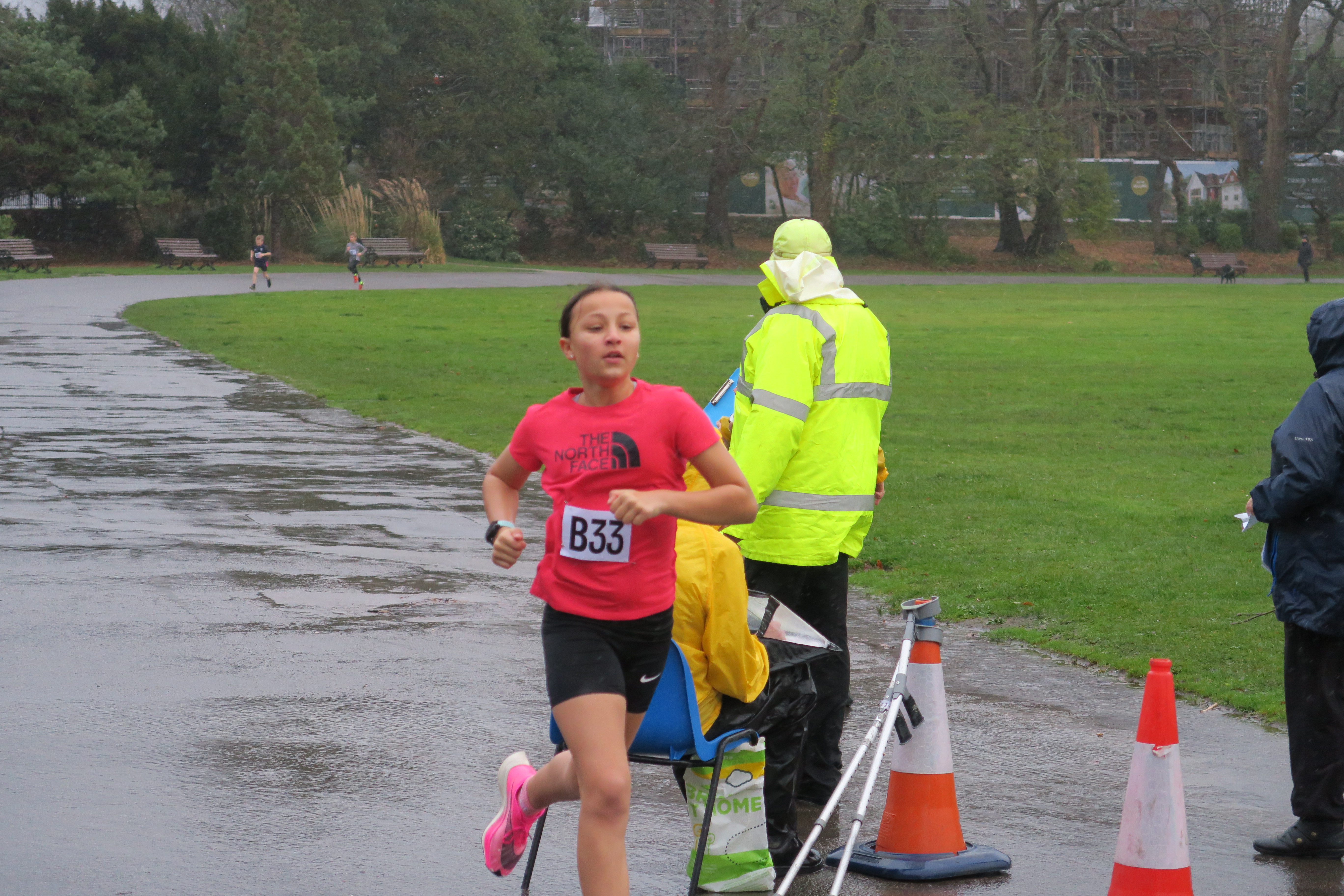