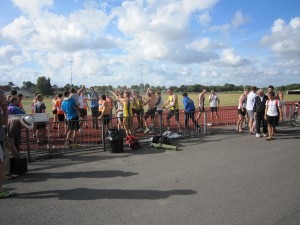 (Tim Hughes reports)
Bournemouth AC‘s Men’s British League Team finished their best ever season at King’s Park, Bournemouth on Saturday 9 August narrowly missing out on victory, but securing promotion to BAL Div 3 for next season. Team Manager Tim Hughes praised his men for their determination and commitment which led to the superb results this season.
The day kicked off with James Lelliott and Adam Nash secured double victories in the Long Jump. Lelliott‘s 7.54m was a PB and one of the best jumps recorded in the division. A return to King’s Park for long standing athletes Matt Frampton, Simon Fricker and Simon Armstrong secured good points in the heavy throws. Lelliott took another PB in the Javelin 59.83m, to just miss out on victory with Andy Brown winning the B string event.
Tawanda Murape and Patrick Sylla scored well in the Triple Jump whilst over in the High Jump Alex Cox and Jamie Williamson scored a double victory. Cox‘s 2.05m was a season’s best.
On the track, Kevin Hodgson and Ben Arnold gathered some great points in the 100m and 200m, before joining with Adam Nash and James Lelliott to secure victory in the 4 x 100m Relay in a photo finish with Yeovil.  Arnold, who has continued to improve all season, set a new PB of 22.37 in the 200m.
Josh King and Karl Welch once again brought home good points in the 800m with Stephen Goreham and Muiris Egan doing likewise and setting fast times in the 400m. England International Steve Way teamed up with Rob McTaggart in the 3000m in what proved to be a tough race. McTaggart was victorious in the B string.  Further useful points were gained in the 3000m s/c by Jamie Grose and Jon Sharkey with Sharkey winning the B string race.
In the final event of the day, the 4 x 400m Relay BAC were narrowly beaten into third place. Yeovil won that event which led to BAC losing the match by only half of a point. The final league table placing means that BAC now will join Yeovil in promotion to Div 3 for next season.
Match Result
Yeovil                           259
Bournemouth         258.5
Newquay & Par      211
Havering                    202.5
VP & TH                     175
Channel Islands    144 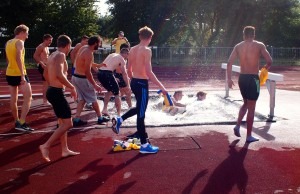