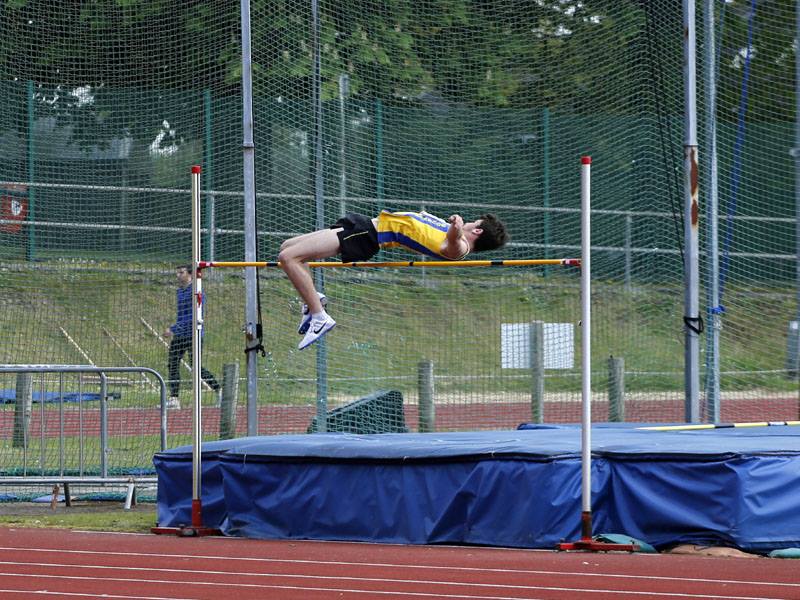 The men’s BAL team convincingly won their first fixture of the season at Yeovil on Saturday 5th May.  The team travelled to Yeovil knowing they were missing a number of key athletes due to the BUCS Champs and also some injuries.  Those hours leading up to the match had seen some frantic reshuffling of the team in order to ensure that all spaces remained filled.  As has been the situation for a number of years now, the BAC spirit and enthusiasm for success carried the team through the day and was the fuel which led to the superb win.

BAC were up against seven other teams in Division 2 BAL, their second season in that division. This year saw four fresh teams to encounter including Glasgow, Basingstoke and Rugby.  The team were determined to get off to a flying start to the season in order to ensure promotion to Division 1 having tantalisingly missed that opportunity last season by only 5 points.  Saturday’s win really does set out the team’s stall.

An early start to the day saw James Lelliott compete in the first of his seven events, the Long Jump. Lelliott opened up his campaign with a convincing win, jumping 7.25m.  Cameron Hale, also looking forward to seven events, was second in the B event.  Soon after this was the Hammer event with Dan Brunsden and Andrew Sheerin both throwing respectable 4th places.  Sheerin slipped during one of his trials and hit his head hard on the concrete.  Thankfully he was quick to recover though – nothing keeps this enthusiastic Scotsman down. 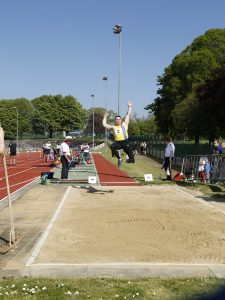 Newcomer to the team, Lewis Bartlett, enthusiastically approached his debut 400mH race finishing in a respectable 6th place.  He had only been practising for the event for around a week and he battled hard to gain valuable points.  Bartlett later joined Josh King in the 3000m Steeplechase but unfortunately had to withdraw during the race due to hamstring tightness.  King, making his season debut, ran a respectable 10:17 for 4th place. 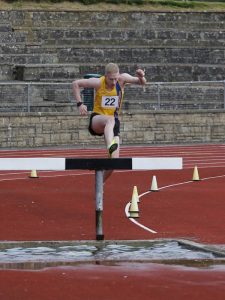 Lewis Sainval had earlier agreed to stand in for the High Jump, an event he had little experience of. The event immediately followed his 800m race, but he valiantly took it on as the supporting team watched the bar height keep increasing with Sainval’s successive clearances.  In the end he achieved 2nd place in the A string with a remarkable 1.90m.  Cameron Hale was 3rd in the B event. 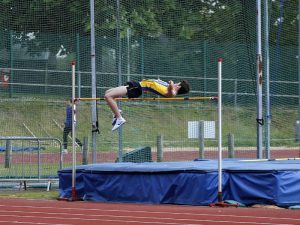 Lewis Sainval’s 800m saw him achieve a season’s best time of 1:59.90 for 5th place in the B race, whilst Jamie Grose has a hard fought 1:58.72 in the A race.  Grose then later went on to gain a valuable 4th place in the A string 1500m with Rob McTaggart doing coming 4th in the B race less than a fortnight after his superb London Marathon effort.

Newcomer Ronnie Wells back on his old ‘home’ track for the first time since joining BAC never failed to impress with some outstanding sprinting.  Wells won the 100m A race in 10.59s with James Lelliott in a rare dead heat for 1st in the B race with 11.01s.  The pair then also covered the 200m races with Wells narrowly missing a win in the A race with a time of 21.71s and Lelliott 3rd in the B race with 22.35s. 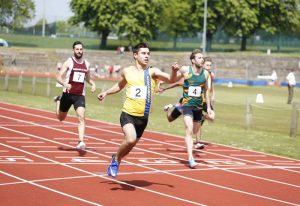 Ronnie Wells in winning form in the 100m 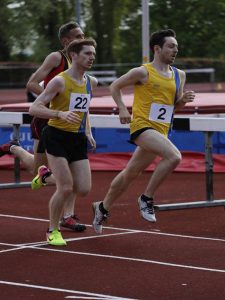 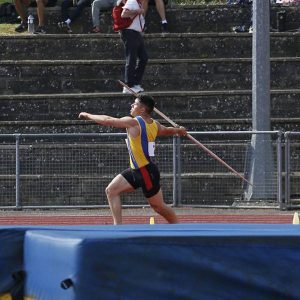 James Lelliott launches the Javelin to a 61.45m PB 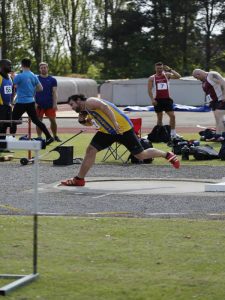 A BAC debut for Josh Kelly in the Shot

In the Triple Jump, James Lelliott convincingly won the A event in 14.25m with Cameron Hale 2nd in the B, with a PB of 11.81m.  The same pair had earlier competed in the Pole Vault to gain valuable points.

The 4x100m squad of Wells, Lelliott, Hale and Egan narrowly missed a win in a time of 43.28s.  The 4x400m squad went into the final race of the day knowing that BAC had already won the match, but Grose, Long, Sainval and Egan pushed hard to achieve some decent spilt times and a 6th place finish.

One match now completed with three more to go, culminating in the final match at King’s Park on 5th August where the promotions and relegations will be decided.

Tim Hughes was delighted with his team’s determination on the day.  He said “It just goes to show that when we take a few hits on athlete availability the rest of the team come together to make things good.  I’ve said it before, but the success of our team is down to the enthusiasm of the athletes and the hunger to win.  A shining example in the match was Lewis Sainval in his superb 2nd place in his High Jump debut.”  He goes on to say “Everyone that travelled to Yeovil was a team player and put the needs of the team over and above their own personal goals.  That’s the type of team we are and that’s how we continue to grow and succeed.  I so look forward now to the next match at Nuneaton <for Rugby>  and bringing together an even stronger squad.  I just can’t thank the athletes enough!”.

<Photos: Thanks to Lisa Shepherd>