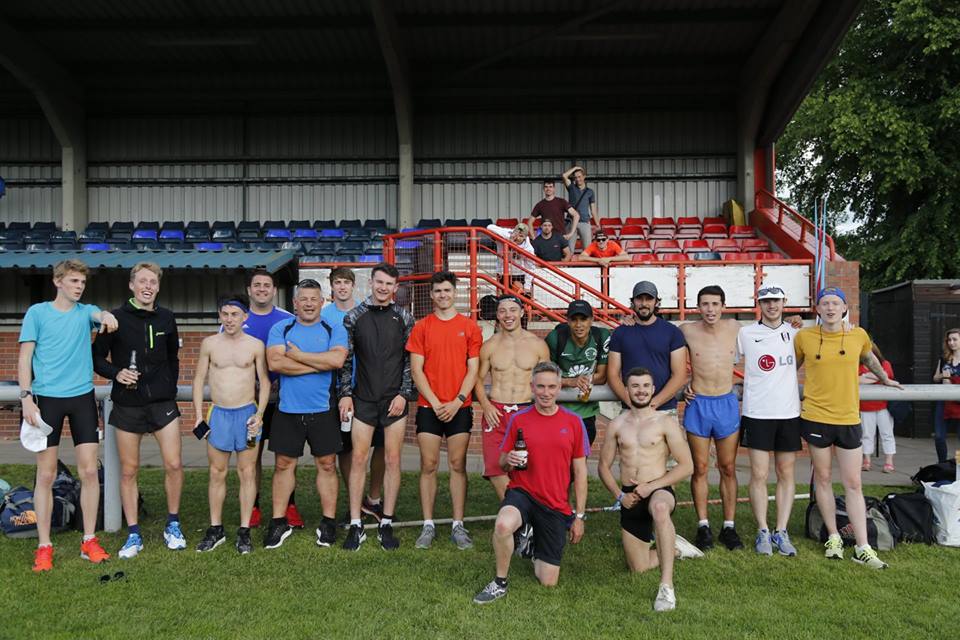 The men’s BAL team travelled to Nuneaton for the second round of this year’s BAL campaign. Having won the first round four weeks earlier the team were seeking another successful result. A stronger team was being fielded this time due to better availability of athletes some of whom last time were involved in other competitions. The team battled hard all day and came out as convincing winners with an outstanding 63.5 point lead. With second and third placed teams differing from round 1, this now places BAC proudly at the top of Division 2 with a four league-point gap.

Once again, the success was down to sheer determination of the enthusiastic team which were by far the team with most presence in the stadium that day. There were a number of comments from other teams about how good our support for each other is and you certainly couldn’t fail to hear the half dozen or so cow bells that rang out during the majority of BAC performances alongside a number of increasingly popular team chants.

As is often, the match kicked off with the Long Jump. Alarm bells rang when during the warm up James Lelliott reported having an adductor strain which prevented him from sprinting properly. Discussions took place to decide which events he felt he could do and that did include continuing in the Long Jump. A brave effort saw him win the B string event with Bradley Pickup making a welcome 2018 team debut winning the A string in 7.32m. Later Lelliott jumped to a convincing win in the Triple Jump A string (13.98m), took 1st place in the B Discus, with 40.20m and threw 57.09m to place 3rd in the B string Javelin. 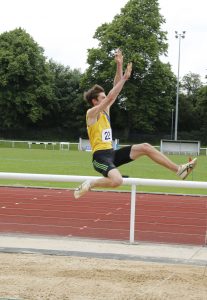 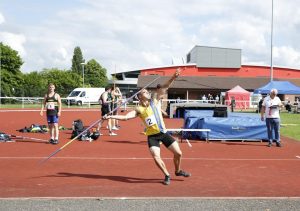 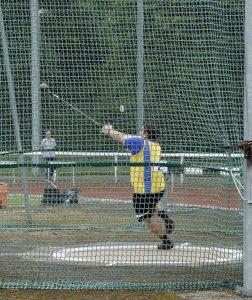 High Jump new boy, Lewis Sainval, continued to enjoy his new hobby clearing 1.93m for a fine 2nd place in the A string event. Cameron Hale won the B in 1.73m. In the Pole Vault Hale and Andy Brown both finished in 5th place in each of A and B.

On the track, Ronnie Wells continued to improve with a superb PB of 10.43s in the 100m A race. New recruit Joel Harvey gained a valuable 2nd place in the B string running a PB of 11.04 in his debut race for BAC. Harvey later finished 4th in the A string 200m in 21.87s with Kev Hodgson making a return to the team to finish 3rd in the B string. Hodgson had shortly earlier competed in his main event, the 400m coming 4th in the A string in 49.21s with Muiris Egan 4th in the B race. The two 400m lads then combined with Joel Harvey and Piers Copeland to run an impressive 4x400m Relay in a time of 3:21.36, not too far short of the BAC club record. 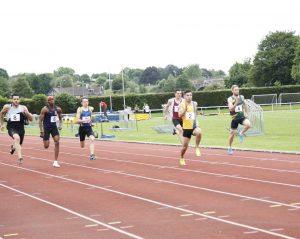 Nobody is catching Ronnie Wells today 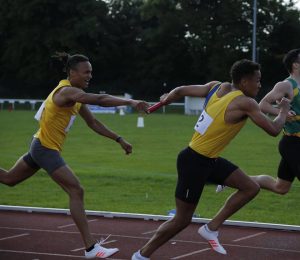 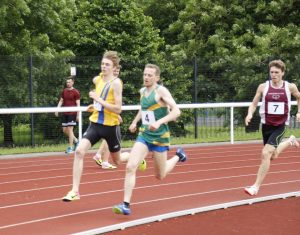 Piers Copeland in ‘cruise mode’ before winning the 800m 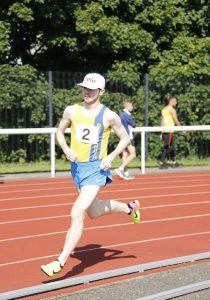 Ayo Byron also appearing in his first BAL match for BAC had an impressive A string win in the 110m Hurdles in a time of 14.98s. Cameron Hale set a new PB of 17.05s to come 3rd in the B race. Ayo had also earlier helped the team in the 400m Hurdles along with Lewis Bartlett, both setting new PBs. Josh King ran a commendable 10:10.77 SB for 3rd place in the 3000m Steeplechase A string with Dan Mulryan a valuable 2nd place in the B. 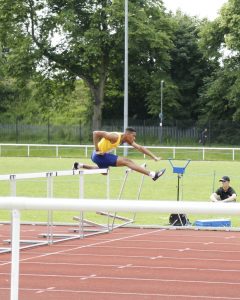 Ayo Byron flies to victory in the 110m Hurdles

Tim Hughes was once again delighted with the performance of the team. “I never expected that we would travel to Nuneaton and win by around 65 points.” he said, “The guys have really upped their game and so want to do the best they can and win every match now. I’m now not only hopeful of promotion to Div 1 this year, but also of a grand slam set of wins in all four matches.” He goes on to say “Once again the team showed their excellent support towards each other. The BAC cheering and the cow bells were dominant at Nuneaton. I think people know who we are now! I’m looking forward to the Big Saturday at Bedford now and proving in front of the entire BAL league that we continue to be a really strong team – and one that it is fun to be part of.” 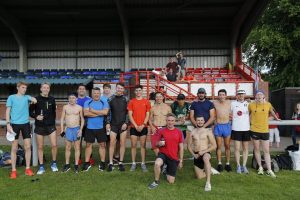 Some of the team with a cheeky celebratory refreshment following the superb win.

Photos: Thanks to Lisa Shepherd