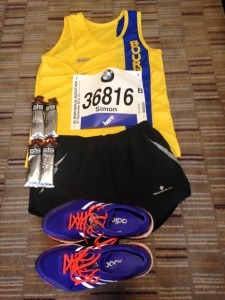 Simon Way is all ready for the Berlin Marathon

Simon Way, Graeme Miller and Tom Paskins were three BAC athletes who completed the Berlin Marathon on Sunday 27 September, all under three hours. Of 27,896 who completed the course, Simon was 440th in 2.43.58, Graeme 457th in 2.44.30 and Tom was 1090th in 2.55.17. Simon described himself as “very pleased” with his result (less than 35 seconds over his PB), “considering less than consistent training”. However, Graeme crossed the finish line “gutted and sore”, which is hardly surprising bearing in mind he was unfortunate enough to sustain an injury in the first mile, followed by more than 25 miles of pain.  On the bright side, as Graeme says, he would have been “over the moon” with this result 18 months ago, which shows the progress he has made.  Well done to Tom, who appears to have knocked nearly 30 minutes of his PB! 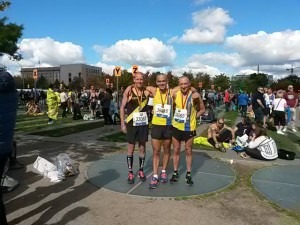 BAC participation in the Purbeck and New Forest Marathons was missed from the last report – apologies!  Part of the Purbeck Marathon event, which took place on 20 September, is the Purbeck 16, off-road as is the marathon, over a distance of, funnily enough, 16 miles.  Of the 132 who finished this race, Gary Woolnough was an amazing 12th in 2.15.10, completing the course just in front of Liz Yelling who, although perhaps not in the form of a few years ago, is still a very classy runner, and a notable ‘scalp’!  Also on 20 September, Peter Thompson was competing in the New Forest Marathon (also, nowadays, largely off-road).  Peter was treating this as a training run, but still managed to finish 2nd, in 2.53.10, despite running further than the marathon distance, having been sent off course by a marshal.  According to the results, Peter has transferred to Bournemouth Joggers!

Back to 27 September, and Heidi Tregenza was competing in, and winning, the Black Hill 10k, a trail run in the Bere Regis area.  Heidi was 14th overall of the 207 competitors, and the first lady.  In the Hoburne 5 (mile) race, now organised by Christchurch Runners, on the same day, Jud Kirk was the only BAC representative, finishing 18th of 105 in 32.58.   Also competing off-road on 27 September (we think!) was Ross Smith in a duathlon.  No more details are to hand, but it is thought the competition was in the Blandford area, but what is certain is that this was part of Ross‘s preparations for the European Duathlon Championships in Spain in the very near future. We wish Ross every success. 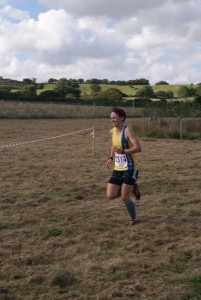 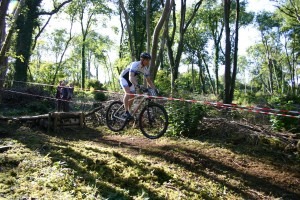 Of course, the Parkruns went ahead as usual on 26 September.  Rob McTaggart won the Bournemouth Parkrun in Kings Park, followed by Richard Nelson, Simon Hearn, Conor Charlwood (PB and 2nd JM 11-14), Joseph Henwood (3rd JM 11-14), Jud Kirk, Steve Cox, Ian Graham (1st V65) and Peter Briant, running in the Parkrun for the first time.  336 completed the course.  Over in Poole Park, BAC had a 1, 2 in the Poole Parkrun, which was won by Jacek Cieluszecki with Steve Way second.  In 15th position (of a total of 630) was Ali Carter, 1st JM 15-17.  In the Blandford Parkrun, Jez Bragg was 5th of a field of 107, in a time well over his PB, and, in the Salisbury Parkrun, Andy Gillespie ran a PB to finish 34th of 220 finishers.