Bournemouth 10 and Bath Half Marathon 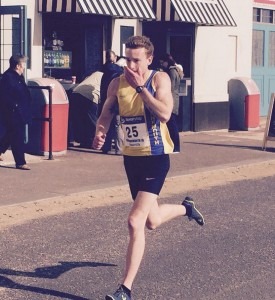 Paul Hill about to finish fifth, and to complete BAC’s winning mens’ team in the revived Bournemouth 10

Well, we did it!! It’s been a long time since BAC organised a road race, and, if we were going to do so again, the obvious choice would be to bring back the Bournemouth 10 mile road race which was organised for almost 20 years by the late (but certainly not forgotten) Brian James. It was going to be a challenge to meet the standards set in those days for this race, and standards set today by the clubs who organise really excellent road races in this area (and, no doubt, elsewhere!). We did our best, it seemed to work, and the feedback we have received has been positive. So, congratulations to Ian White and Dave Parsons, as Race Directors, and the members of the organising committee, Sam Laws, Richard Nelson, Steve Cox and Ian Graham. Many thanks to all the people who turned out to marshal, and to act as officials, without whom none of it would have happened, and many thanks also, to the Dorset ACF, who came along with a squad of nearly 30 Army Cadets, and their supporting adults, and efficiently manned the water stations, and helped with the marshalling, and with their enthusiasm added a great deal to the day. Thanks, too, to SweatShop and Lush for their support.  And, of course, not forgetting to thank the runners themselves for supporting BAC‘s new venture. We also had some runners ourselves in the race! In fact, BAC took the winning and second positions with Josh Cole and Jacek Cieluszecki respectively who, along with Paul Hill, won the Mens‘ team prize. In addition, Jon Sharkey acted as a 70 minute pacer, a feature which we would like to develop in future years.  The likelihood is that the race will be back next year, when hopefully there won’t be any works going on (as happened this year at Bournemouth Pier) making it impossible to follow exactly the original course, and perhaps without the strong wind which made the second half of the race such a battle!