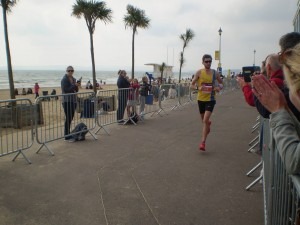 Toby Chapman is about to finish 12th in the BMF Marathon

The third Bournemouth Marathon Festival took place over the weekend of 3/4 October, consisting of 1.5k and 2k children’s’ races, followed by a 10k and 5k on the Saturday, and a Half Marathon and Full Marathon on the Sunday. Once again the weather played its part, producing, for the most part, perfect conditions, sunny but not too hot, and not too much breeze. Apart from the children’s’ races, 7232 athletes took part over the weekend, and, as the results aren’t categorised by club, it hasn’t been easy to identify all the BAC athletes who competed, so apologies to anyone who’s been missed.  The ‘Supersonic 10k’ on Saturday afternoon was won by Karl Welch in 34.52, followed by Damian Boyle, 10th in 36.55 and Chris O’Brien, 20th in 38.15.  Both Damian and Chris knocked over 1 minute off their 10k PBs.  Also with a PB, the next BAC athlete to finish was Simon Hearn who was 37th in 39.41, 11 seconds inside his previous best time.   In 51st position was Michael Halpenny, in 41.1, and, believed to be running her first 10k, in 161st position (of a total of 1440) was Louise Price, with a time of 46.2.  In the ‘Speed of Light 5k’ on Saturday evening, Rob McTaggart was second in 16.4.  This race was quite an impressive sight, as all runners were issued with head torches, which most of them wore, which produced a continuous line of white lights which could be seen all the way along the promenade between Bournemouth and Boscombe piers.  However, the many spectators who don’t know who the athletes are would not have known that BAC had a winner in the 10k, and a second place in the 5k, as neither Karl nor Rob were wearing their club vests – why not?  The vast majority of our athletes are proud to pull on the blue and yellow vest and show their allegiance – why not all?  The next day, Sunday, both the Half Marathon and Marathon started in Kings Park, which was alive with activity from about 5.30 am!  Of the 2953 who completed the Half Marathon, in second position was Peter Thompson, who ran the course in 1.12.59.  Also running very well was Gary Woolnough, who knocked 90 seconds off his PB to finish 51st in 1.25.48.  If there had been a team event in the Marathon, BAC would certainly have been up there, as Jacek Cieluszecki was 7th in 2.35.19, and was first V35, with Stuart Fox (recently rejoined, which is very welcome news) 10th in 2.40.41 (2nd V35), and Toby Chapman 12th in 2.44.50.  Of the 1873 marathon finishers, Tony Hunt was 266th in 3.39.54. For a short video giving something of the atmosphere of the Marathon, have a look at https://www.youtube.com/watch?v=yCIPhv4PZ1w (courtesy of Brandon Meredith).  The Bournemouth Marathon Festival could not have taken place without a vast army of volunteers, amongst whom BAC had a presence, including Steve Cox, Jud and Paula Kirk, Simon Hearn, Ian Graham at the starts, and very likely others along the various courses.

Meanwhile, further west Andy Gillespie was completing the Atlantic Coast Challenge, a gruelling event involving three marathons in three days, over 2/3/4 October, from Padstow to Lands End along a “wild and rugged ” course with “steep climbs and descents”.  Unfortunately, not everything went according to plan from the organisers point of view, with many competitors taking a short cut, despite numerous warnings against this, on the first day, and Andy himself having to help out a fellow competitor on the second day, which obviously affected his total performance.  The outcome is that, as Andy says, the results are “a mess and irrelevant”, and certainly they do seem rather meaningless, and it’s impossible from them to work out how anyone has performed.  Nevertheless, Andy completed the three marathons, which is quite an achievement, and brings his total marathon count up to 60.

At the Bournemouth Parkrun on 3 October, of the 363 runners, Paul Hill reverted to his traditional finishing position of second, with Ian White finishing 13th, Jud Kirk 18th and Steve Cox 27th.  Jez Bragg was the winner of the Blandford Parkrun, and Gemma Bragg was 12th of a total of 97.  548 completed the Poole Parkrun, the only BAC representative being Ross Smith, who was 10th.  Ross will be competing in the European Duathlon Championships in Spain next weekend, and we wish him the best of luck.  This involves a cycle-dominated race of three laps with 1000 feet of climb per lap, following a 4 mile run and followed by a 2 mile run.  Ross says he is ready to “smash it or be smashed”, but that it “should be fun”!