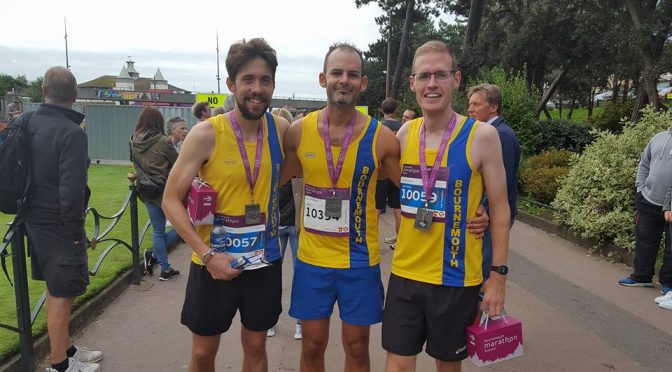 The second day of the Bournemouth Marathon Festival kicked off on with an 8am start for the Half Marathon. Although this entailed getting out of bed and up a little earlier than usual for many of the participants, once daylight began to emerge they were pleased to see that the conditions were great for running.

There seemed to be very minimal breeze, which would be key with many sections of course going along the promenade and the overcliff roads. It was also cloudy at this early stage in the day but with no sign of any rain about so the temperature was not too hot but not chilly either. The Half Marathon runners must have really felt they’d lucked out in comparison to the conditions for the 10k race the day before.

Following on from his 2nd place finish in the Supernova 5k the previous day, Rob Taggart once again found himself at the sharp end of the field. The Half Marathon was the only race of the Bournemouth Marathon Festival that Tag was yet to have a crack at.

The race started off from Kings Park, with the elite club runners immediately setting a very quick tempo. Peter Baksh of Beckenham was the man in front in the early stages of the race and he set a pace that no others were able to live it. By the end of the race Peter had built up a lead of over two minutes on his nearest rival Simon Goldsworthy of Guildford & Godalming.

Peter crossed the line in a stunningly quick time of 1 hour 10 minutes and 29 seconds. Simon’s time in that got him 2nd spot of the podium was 1:12:53.

Behind them the battle for 3rd place was ensuing between Tag and Stuart Holloway, who runs for City of Salisbury. As they made their way along the promenade from Boscombe Pier to Bournemouth with two miles left to go, Tag was sitting on Stuart’s shoulder.

Tag was hoping that his track speed would be a help when reaching the closing stages of the race and, just as he did in the 5k, he was able to find the strength for a strong sprint finish to pip Stuart to the post and take 3rd place by 7 seconds.

Given the lack of training he’d had going into the weekend, Tag was really pleased with his finishing time of 1:13:29 and was delighted to take his second podium place of the weekend.

Will Brewin took 5th place in the race with a time of 1:13:58, followed by Matthew Hammerton of Romsey in 6th with a time of 1:14:14. Next there was a small pack of four, which included Stuart Nicholas of BAC. Stu had commandeered three others and the four of them worked together, taking turns to drive the pacing. The group also included Bayley Massey, who had won the 5k race the day before.

The first eight miles of the course were relatively flat and smooth. You then get hit by a short sharp rise as you make your way through Boscombe Chine Gardens which leads onto East Overcliff Drive. It’s a hill that is sometimes used by BAC on their hill sprint training sessions.

This hill can slow the pace down significantly if you haven’t saved enough energy for it and as you follow onto East Overcliff Drive there is then another slight incline of the road which forces you to work hard before heading back down onto the promenade for the final stages of the race.

By the time they got off Boscombe and back onto promenade, the pack of four that Stu was in had dispersed slightly. They were all still within quite close proximity of each other though and all ended up finishing within 13 seconds of each other. Stu crossed the line in 8th place with a time of 1:14:30.

Taking on his second race of the weekend, having previously secured 3rd place in the 5k the previous day, Billy McGreevy was in the hunt for a second PB of the weekend. He was looking to go under 1 hour 19 minutes for the first time very and , as it panned out, he ended up very close to that target.

Billy’s finishing time was 1:19:08, which put him in 17th place. It was another fantastic run from him and was a 9 second PB. He was a little disappointed not to break 1:19 on this occasion but is confident of conquering that marker next time round. Had he not run such a fast 5k the previous day, he may well have done it on this occasion, but he was still very happy he did having gained his spot on the podium.

Making his BAC debut, Joseph Morrison was another club member who secured a fabulous new PB as he weighed in with a time of 1:26:47. This shaved a good 2 minutes off his previous best time.

Joe has been a regular at the Tuesday night training sessions on the promenade in recent weeks and had been running very well. Despite the impressive PB, Joe’s race management certainly left room for improvement. He had a friend who completed the race in 1:20 and had tried to stick with him in the early stages of the race.

In fact, Joe’s completed the first 10k in 38:36, which would have been a PB for him in a 10k race! Inevitably, the fast start caught up with him as the race progressed and he began to struggle in the second half of the race. By the end he was really clinging on as he ticked the miles off till he saw the welcome sight of the finish line.

Slightly further down the field, three BAC members found themselves running together. Richard Brawn, Trevor Elkins and Peter Thompson had seen each other in the early stages of the race and had got chatting.

They were all running at a similar sort of pace and decided to stick together for the long haul. This turned out to be a great decision for the trio as they were all running at a comfortable enough pace to be able to converse but still push fairly hard throughout. This made the race a lot more pleasant and made it seem almost like a long tempo training run rather than an all-out, do or die race where every second counts.

Whenever they approached an area of the race where larger crowds had gathered, people could be heard shouting and cheering when they caught sight of the three Bournemouth AC local runners emerging in a line together. That said, some of those cheers may have been aimed more at Peter, who is a very famous face since his 44 marathons in 44 days in 44 different countries escapade.

Rich and Trevor were both targeting a sub 1:30 finish for the race and when they hit the promenade with just over three miles left to go, they knew they were in a position to meet that target. It was then just a case of seeing how much they under they could go.

Rich’s PB was just over 1 hour 29 minutes so at this point he turned his attention to beating that. Trevor’s last half marathon race was Bath back in March where he did 1 hour 32 minutes. That was on much weaker legs though and he has since upped his mileage and trained a lot harder.

The trio stayed together until around the last half a mile or so when Rich decided it was time to push on. Rich has noticed he’s been running a strong last mile in races recently and has usually had enough in the tank to up the pace in the latter stages.

He began to open up a gap on Trevor and Peter before hitting Bournemouth Pier and making a final dash for the line. Rich was delighted to see that he had achieved a superb new PB of 1:27:18. This put him in 79th place in a field of 3,995.

Filtering in shortly after Rich, Trevor had also secured himself a new PB finishing in 1:27:35. Prior to the race Trevor had been suffering from a dodgy stomach so was not sure how he would fair once the race got going. Fortunately he seemed to settle into it okay and the stomach ache faded. It was Trevor’s first race for the club and he felt proud to be wearing the BAC vest.

Amazingly, Trevor is more of a 100m sprinter than a distance runner and is actually hoping to join up with the track team in the near future. In fact he used to be capable of a 10 second 100m back in his school days and can still probably hit around 11 seconds. Trevor finished the Half Marathon in 83rd place.

Just 5 seconds late Peter crossed the line, coming in 85th with a time of 1:27:40. It has been long road but Peter is now beginning to return to full fitness since his 44 marathon exploits. He’s still a long way off where he used to be but he’s feeling healthy and that’s the main thing.

Another BAC member going all out for a PB was Pawel Surowiec. Pawel has been turning out for training very regularly on both Tuesday and Thursday nights and had been running well during sessions. He needed to get close to 1 hour 32 minutes in order to secure a PB.

The race had been going okay for Pawel until he hit the hill going through Boscombe Chine Gardens after mile 8. That hit him hard and he had to dig deep into the energy reserves to get to the top.

From that point onwards it was tough for Pawel to pick the pace back up. He got to the line in a time of 1:32:10 which gave him a marginal new PB. This put him in 175th place.

Following a spell of 6 months on the side-lines due to an ITB injury, Tom Piloni had only started running again back in June and was almost back to square one at that point. His longest training run in the lead up to the race was a slow 12 miler which didn’t feel particularly easy.

Despite not having the best preparation, Tom ran surprisingly well on race day, finishing in a decent time of 1:36:12, which put him in 298th place.

There was even a BAC married couple of the race, with Michael Cowham and Cherry Sheffrin both in action. The pair were close together throughout the race but Cherry overtook Mike near the end of the race and wound up finishing 13 seconds ahead of him in a time of 1:42:37. This put her in 577th place.

Another BAC member tackling the Half Marathon race was John Preest, who completed the course in 1:45:44. That put him in 783rd position in the standings.

Estelle Slatford was chasing a half marathon PB of 1:48 and was going well for the first half of the race. She then began to struggle a bit with lower back pains that caused her to slow down quite considerably. In spite of the pain, she kept pushing but ended up crossing the line in a time of 1:52:55. She was a touch disappointed with that, but ultimately enjoyed the race.