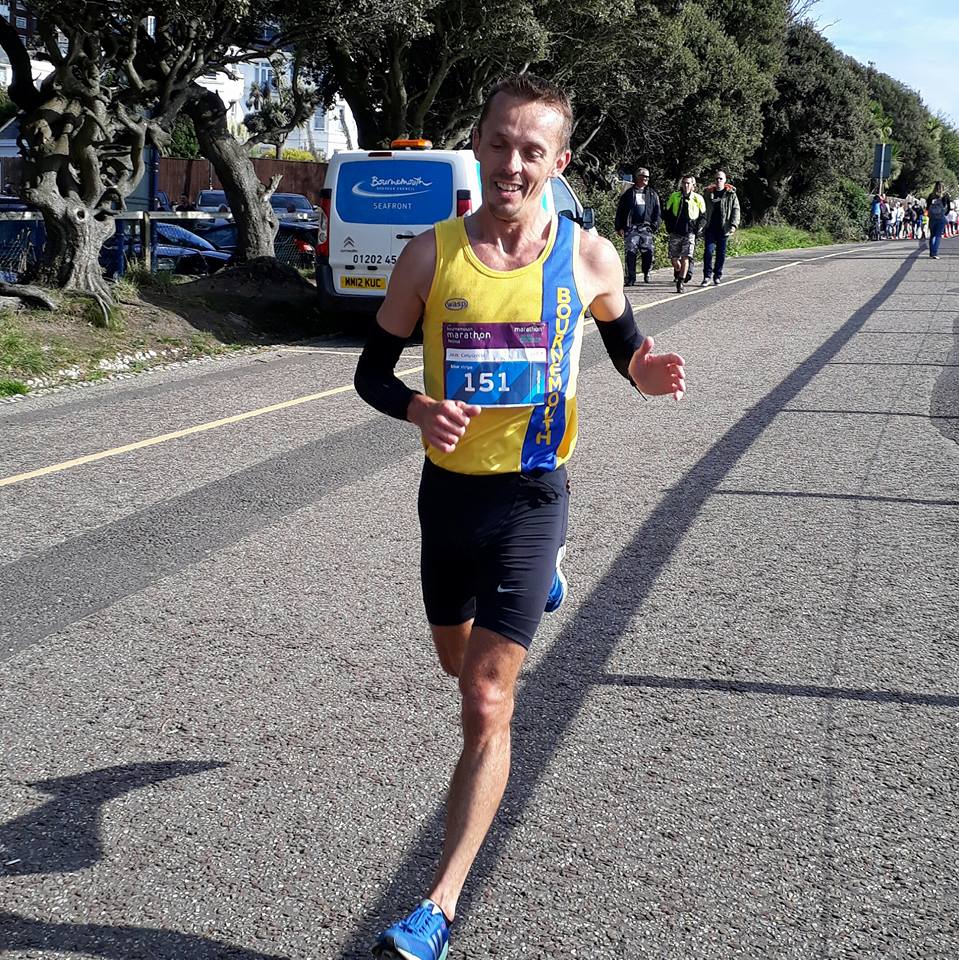 The showpiece race of the Bournemouth Marathon Festival was, of course, the full marathon. The route started out at Kings Park, just as the Half Marathon had two hours earlier. By the time it got going large crowds had congregated around Bournemouth Pier, most of whom had been there to see the finish of the Half Marathon.

The prize money for winning the race had been considerably reduced this year which resulted in the absence of the Kenyan athletes that came over for the event last year. This meant that local runners would have the chance to shine this time round which made for a much more exciting spectacle.

One man who was determined to seize that opportunity was Bournemouth AC’s very own Jacek Cieluszecki. Jacek has had an incredible season, winning the British edition of the Red Bull Wings for Life and victories in the Portland 10 and the Round the Rock 10k Dorset Road Race League fixtures. He’s also competed in some high profile mountain ultra races including the Eiger 51 and the OCC Mont-Blanc.

Despite his glittering array of victories, a win in the BMF Marathon was something the had so far eluded Jacek. He came 6th in it last year, 7th in 2015 and 7th in 2013. In the form that he’s in at the moment though, there was always a good chance that this could be his here.

Jacek set off at  a blistering pace of around 5:30 m/m which was simply too fast to live with for virtually all the other competitors. There was one young chap who tried to stay with JC for the first 3 miles. He may well have just wanted a brief moment in the limelight though as he soon faded away.

This left Jacek to go it alone for virtually the whole race, unless there was anyone out there quick enough to catch him. Keeping the pace consistent at around the 5:45 m/m mark, he soon built up an unassailable lead. It was soon abundantly clear the JC was going to win the race. It was only really question of how big the margin would be between himself and the 2nd placed runner and also what time he would do. 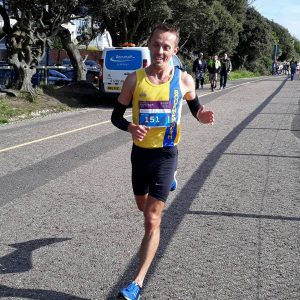 As he came past the finish line the first time round which the runners had to do at mile 17, people could scarcely believe their eyes, both at how fast he was going and also how far ahead he was. There was simply no one else in sight. The second place runner arrived about 10 minutes later.

The atmosphere was electric around the Bournemouth Pier area after Jacek had gone past. He now had just over 9 miles left to go and could feed off the energy of the crowd to keep him going.

After going up the overcliff path to the left of Hot Rocks, the route then veered over to Sandbanks before working its way back to Bournemouth Pier approach for the grand stand finish. 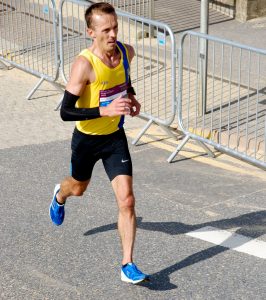 As he crossed the line, the clock stopped at 2 hours 31 minutes and 59 seconds. This was a quite astounding effort, especially considering he was out on his own for virtually the whole race. It was also his fastest time to date in the BMF Marathon, eclipsing his previous effort from of 2:33:14 which he did in 2013.

Before the race Jacek had set himself the target of anything under 2:35 so he was delighted with the time. Having spent most of the summer training in the Alps and the Purbeck, he knew he’d lost a little bit of speed but had probably gained in strength and stamina.

Jacek’s nearest rival Anthony Webb of Medway Park Phoenix arrived 10 minutes and 43 seconds later, crossing the line in 2:42:42. This is still a very good time; it’s just that the time Jacek set was so incredible. 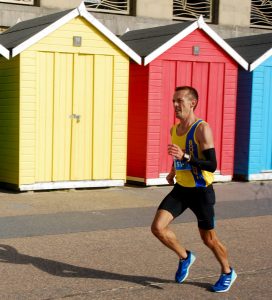 Anthony Clark was also in the race but was forced to pull out at the 17 mile point due to a hip injury. He was in 5th place at the time but just didn’t think it would be worth struggling through another 9 miles and potentially making the injury worse. Well, it was either that or he noticed people sitting outside Hot Rocks in the sun drinking pints of beer and he got too tempted by that to carry on!

Another BAC member who was in the starting line up but sadly didn’t make it to the finish was Nikki Sandell. Nikki had picked up an Achilles injury in training two weeks before she was due to so the Marathon and sadly it hadn’t healed properly by the time race day arrived.

Despite that, she thought she may as well give it a go and turned up for it anyway. Unfortunately she only managed 1.5 miles before having to pull out. The pain was too much and it would have been impossible to continue for another 25 miles in that state. She knew this would be the likely outcome though so had already pretty much accepted her fate in truth. It didn’t prevent her sticking around to watch the rest of the race, support her teammates and enjoy the remainder of the day. 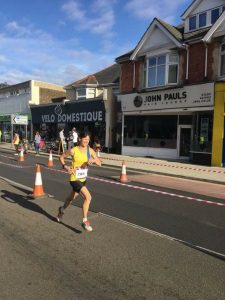 Nikki Sandell only managed 1.5 miles of the race before pulling out due to the pain from the achilles injury she’d suffered a couple of weeks prior to race day

In the second part of his Bournemouth Marathon Festival double-header, Mark Hillier took on the full marathon, having run the 10k the previous day.

Mark was fairly conservative in the first half of the race and was cautious not to aggrevate any of his injuries or niggles. he then stepped it up a bit in the second half and at the end of the race he was pleased to see that he’d done a negative split.

Mark did the London Marathon in 1989 when he was 18 and then again when he was 1991. He then stopped running for about 10 years whilst making a foray into mountain biking. About 5 years ago, he started running again, but doing only shorter distance races to half marathon distance.

A few months back, Mark reckons he started to have a midlife crisis resulting in him entering Race to the King – a 53 mile ultra over the South Downs. He was kind of hoping this would temper his sudden urge to push himself to the limit but he ended up doing better than he expected and, even though it hurt, all it did was fuel his desire to push himself even further.

He has now entered the Marathon des Sables, which is renowned for being the toughest footrace on earth. The race consists of 156 miles done in six stages over seven days through the Sahara desert with temperatures regularly hitting 50 centigrade. He’s hoping this will be enough to finally quell that desire to take things to the extreme.

As part of his training he headed down to Devon a few weeks ago to do a 33 miler over Dartmoor. The weather was grim and it was all off-road, so it was more like 1/3 running, 1/3 hiking and 1/3 dragging himself through the mud. But he completed it and thoroughly enjoyed it. He’s also entered the Bovingdon Marathon in December and is contemplating whether he is brave enough to enter the Brecon Beacons 46 miler in mid-November.

Carl Jenkins, who has been training with BAC recently on Tuesday and Thursday nights, was also running. Carl completed the course in 3:42:59, putting him in 314th place.

This was a decent time given that he hadn’t done much proper marathon training in the lead up to the race and it was still 7 minutes quicker than last year.

When he’s on top form though, Carl is a force to be reckoned with, and his PB is 3:02:28 which he did at the Rotary Shakespeare Marathon in Stratford-upon-Avon in 2011.

He’ll now be turning his attention to the ABP Southampton in April where he’ll be running his next marathon. Hopefully, with an adequate amount of training, he should be on course for a much quicker time than the one he’s just posted at at the BMF.

Whilst Jacek was racing over the finish line to seal his glorious victory, Tamzin Petersen was crossing the line for the first time meaning she was now at the 17 mile point in her race.

Tamzin had been aiming for a sub four hour finish and had been following a rigorous training programme in order to get herself the best chance of hitting her target. This meant four months of extremely long runs, every single weekend.

She got through it though and was poised to do well and give it all she’s got on race day. The first 12 miles went smoothly and felt comfortable although she was running at a slightly faster pace than she’d trained at. Then the trouble started!

She was struck by a massive cramp in her calf. She had also felt this the day before as well and it seemed to have just appeared for no apparent reason. Her hip then started to play up as well which added to the frustration. She then saw her parents who had come to cheer her on and was able to grab some painkillers from them before shuffling on.

She managed to run the next 5 miles, digging in as deeply as she could, determined not to pull out of the race she’d trained so hard for. By the time she got to the 16 mile stage she already knew she wasn’t going to meet any or her goals, or even get a PB. That made the last 10 miles a real mental battle.

To give credit where credit is due, she carried on through and managed to see the race through till the end, which shows a lot of character. Her finishing time was 4:10:22 which put her in 734th place.

Whilst it was not the race she wanted, she lives to fight another day and will no doubt have the mental fortitude to put this behind her and move onto the next challenge. All is not lost though. She has made good progression since starting her marathon training and that progression that she’s made will be far more important to her in the long term than the glory gained from a one-off race.

This highlights one of the most brutal aspects of marathon running. No matter who you are and what training you’ve put in, it all comes down to that 3 or 4 hours of racing in which anything could happen. Suffering cramps toward the end of a race is regular theme for marathon runners and they have ruined many a marathon before and they will do many times again.

At the other end of the scale, if everything goes right, as it did for Jacek, you can achieve something truly momentous that will stay with you forever. 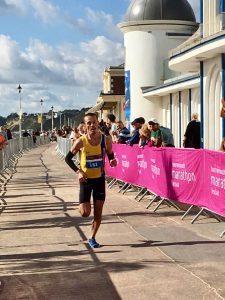 Jacek races to the finish line to complete a magnificent victory in a time of 2:31:59