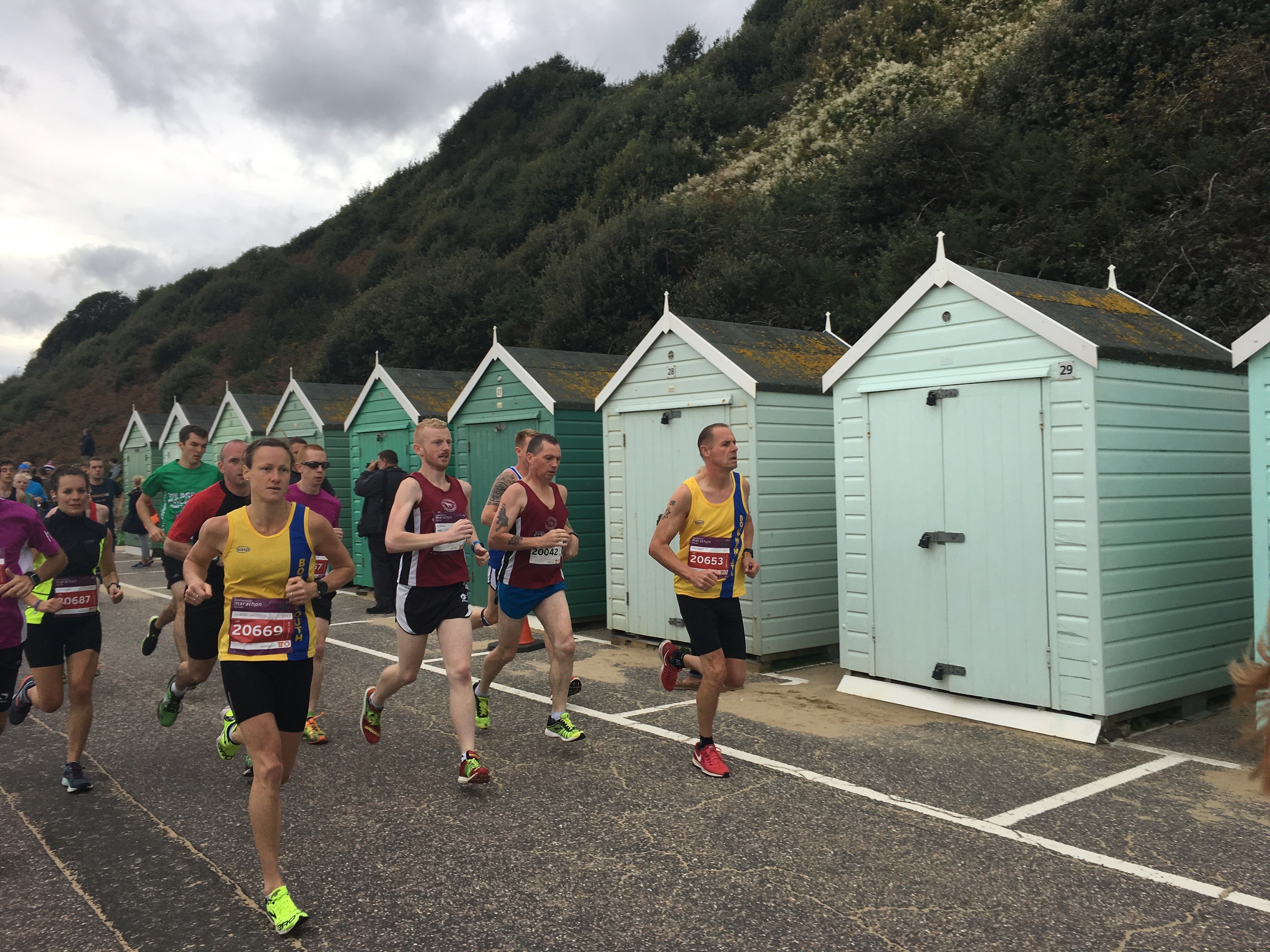 The widely anticipated and ever popular Bournemouth Marathon Festival kicked off at 4pm on Saturday 7th October with the Supersonic 10k.

There was a real buzz around the place as the athletes lined up in their starting pens along the promenade next to Bournemouth Pier, with the elite club runners at the front and stretching all the way round to the roundabout on Bath Road. The event had once again captured the imagination of huge numbers from the local area and had attracted athletes and clubs from far and wide. A field of 2,232 runners took part in the 10k race.

Four days prior to race day Bournemouth AC had been contacted by visually impaired runner Khalid Elkhereiji. It turned out his guide runner for race was injured so he had approached the club to ask if anyone would be prepared to step in and assist. Khalid was hoping to finish in around 42 minutes so he needed a guide runner who is capable of comfortably finishing a 10k in under 40 minutes.

Almost immediately, Jez Bragg responded back and answered Khalid’s calling, saying he would do it. It would be Jez’s job to communicate the pace to Khalid and made him aware of any hazards as they progressed along the course, plus to ensure he was running at the intended place and maintain morale throughout the race. This part was especially important when running into the headwind in the second half of the race.

Jez actually found running as a guide quite a liberating experience. For the first time in a race, he didn’t think about himself at all. It was all about supporting someone else, which was a completely different and very refreshing mind-set.

Although they’d only done a one mile warm up together, the race went smoothly for Khalid and Jez and Khalid finished very strongly to secure a new PB of 42:12. This was a very impressive effort given the westerly wind along the promenade and put Khalid in 73rd place overall. 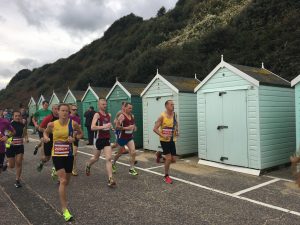 The winner of the race was Ben Lewis of Poole AC, with a blistering time of 34:03. Ben is predominantly a track runner but he has been known to do the odd 5 mile or 10k road race. He is still in the U20 age group as well so will no doubt have a very bright future ahead of him.

It was a familiar face in 2nd place, as Graham Robinson reached the line in a phenomenal time of 34:40. Although Graham runs for Sandhurst, he is well known amongst the BAC fraternity, having represented the club in the Hampshire League Cross Country on numerous occasions.

The first official BAC athlete to cross the line was Simon Hearn who finished 48th in a time of 40:44. Simon hadn’t done a race since the Hull 10k back in June and hadn’t been training as regularly as usual in the lead up to the race so he felt a bit ring rusty.

He had earmarked a time of under 42 minutes as his target, so, although it wasn’t close to a PB for him, he was quite happy with the result. He was 6th in the male 45-49 category. 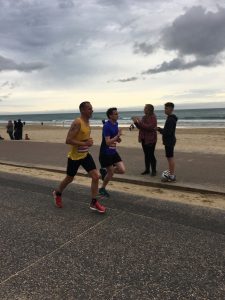 Simon was the first Bournemouth AC finisher in a time of 40:44 putting him in 48th place

In his first ever race for the club, Phil Cherrett was on the hunt for a PB. Phil has been attending the Tuesday night training sessions on a regular basis and has demonstrated an explosive turn of pace on occasions. He’s been putting in a concerted effort to improve his strength and stamina and was hopeful that on race day, the hard training would pay off.

He started out a little too hard, despite making a conscious effort to slow himself down. He found kilometres 4 to 8 quite tough going, especially running into the wind but he really felt the sessions he’d done with BAC helped him battle through.

With a mile left to go, he knew he was on for a sub 45, so he’d beaten his time from the previous year. It was then just a case of, would he be able to topple his PB time of 44:44. And the answer, was yes. Emphatically! He managed to pick up the pace in the closing stages to finish in a fantastic time of 43:37. This put him 109th in the overall standings.

Phil was delighted with the run and is very much looking forward to seeing more improvements in his running going forward thanks to the training sessions at BAC.

The first lady over the line for the club was Joy Wright, who finished in 14th female in a time of 44:06. She was 122nd overall and took 3rd place in the 40-44 category, finishing just 5 seconds ahead of her nearest rival in the category, Zoe Hayward.

Zoe had attempted to overtake Joy a few times toward the end of the race and was not best pleased when Joy put in her usual ‘do or die’ sprint finish to pip her to the post.

It wasn’t quite as fast a time as Joy would have wanted but she had been unwell and is recovering from an Achilles injury so given the circumstances it was a pretty good result. In fact, she felt so sick that she was relieved to make it to the finish line without vomiting!

In the last 2k she also had a fly go into her eye and surmised that it must be hitch hiking to the finish. At least the fly chose a good person to ride with as Joy zoomed to the line.

Another BAC lady taking on the 10k event was Louise Broderick. Louise is an assistant coach for the junior development group on Wednesday nights and helps the club out in various ways when she can.

Louise’s time of 46 minutes 55 seconds put her in 4th place in the female 45-49 category and she finished 224th overall. She found the 4pm start time difficult to get to grips with and hasn’t had much time to train this year so she was pleased with her performance. She was the 30th woman to cross the line out of 1,335. 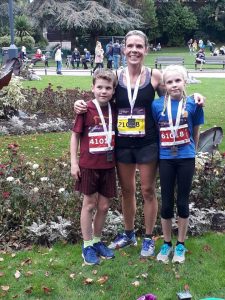 Having entered both the 10k and the Marathon for the BMF, Mark Hillier was in for an interesting couple of days. A friend of Mark’s was running the 10k in his first ever race, so Mark decided to run with him, despite having already entered the Marathon.

As planned, Mark completed the 10k race with his friend in a time of 53:06, putting him in 533rd place. This was a comfortable pace for Mark and meant that he had a lot left in the tank for the Marathon the next day, which would no doubt prove crucial.