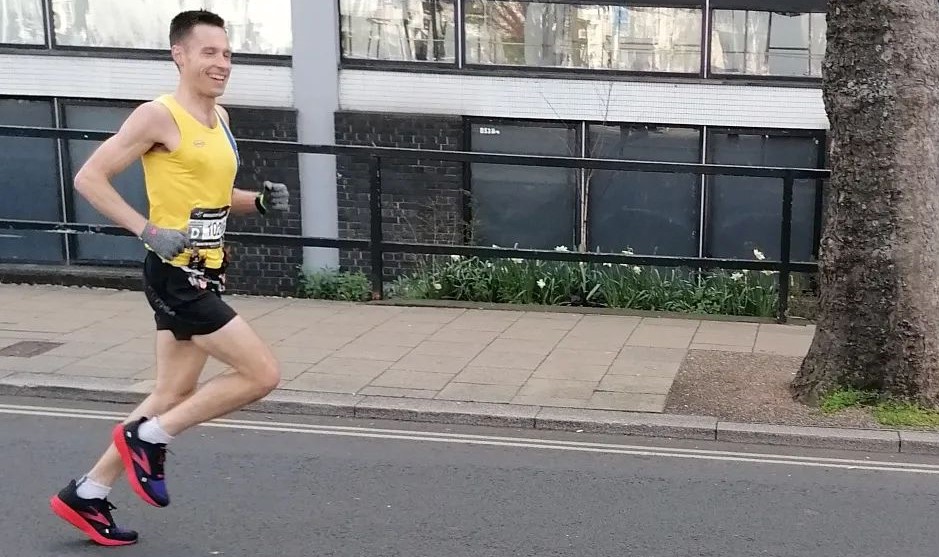 Having a deferred entry into the Brighton Marathon in his back pocket since 2020, it was now time for Stu Nicholas to finally cash it in and do the race, albeit two years later than planned.

Since then, a lot had changed in the world, but one thing hadn’t – and that was the quality of Stu Nicholas’s running. That’s something that looks set to always remain a constant.

Stu’s original target for the Brighton Marathon towards the backend of last year was to secure his first ever sub 2:40 time. His quickest marathon before that had been a 2:43:10 at the Brighton Marathon in 2019. But he’d progressed since then, despite the lack of large scale races to show for it over the past couple of years.

That seemed like a legitimate target for the 2022 Brighton Marathon until just before Christmas he met Robert Fryer at the Portsmouth Coastal Marathon. The pair got chatting as the strode out, way ahead of the rest of the field. Robert was going for something in the 2:40’s and Stu decided to along with it.

They were going at a much faster pace than either of them had originally expected and after reaching the 20 mile point, they agreed that they would finish together unless one of them blew up.

That resulted in both men crossing the line in a phenomenal time of 2:39:46, which meant that Stu, without even intending to and before even starting his training for Brighton, had already achieved his sub 2:40. Now he was going to have to look for an even quicker time at Brighton.

Stu had been doing his fair share of races for the club over recent months, having competed in all four of the Hampshire League Cross Country fixtures and competing in the Lytchett 10 and Blackmore Vale Half Marathon road race league fixtures.

He’d also run at Bournemouth parkrun seven times since the turn of the year and finished first on every single occasion, demonstrating a remarkable level of consistency.

The course records at Brighton make it the second fastest marathon in the UK and it was also the second largest and the 8th biggest marathon in Europe. In the 2022 edition there were over 8,000 runners taking part bringing a varied range of ages, experience and ability to the table.

The route starts of in Preston Park before snaking its way through Brighton city centre. It then heads along the seafront before finishing at the iconic Madeira Drive where the opportunity to soak up the applause from the onlooking crowd awaits.

Since the course is predominantly on the coast, wind speed and direction was a key factor. Luckily, on the day of the marathon it was a southerly wind, which meant it was coming from the side rather than head on. That was a massive relief for Stu.

With no fast Good For Age or Championship start on offer, Stu had go in with the masses and he was in the white pen which was for sub 3:15.

Arriving in Preston Park in good time for the portaloo formalities, he then made his way to the front of the pen amongst all the sinewy looking racing snakes with various forms of carbon plated trainers.

He then penned a 5:41 third mile, making for a very quick first 5k. Whether that was a sign of things to come or he had cooked his goose too early remained to be seen. 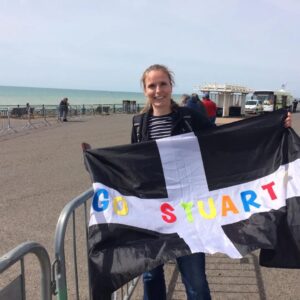 At the speed Stu was going at there weren’t too many other runners around him as most of them just couldn’t keep up. That meant he was on his own for large sections of the race, especially from mile 6 to mile 12 heading to Ovingdean and back.

Luckily he had great support from the three Trees – meaning his partner Anna and her two sisters – and that helped him stay focused and motivated throughout.

Hitting the half way point at 1:15:30, he was only a minute off his half marathon PB!! He knew it was then just a case of hanging on or blowing up. He did his best to maintain the pace and he’d been under six minutes for every mile out the first 16, putting him on course for a spectacular time. Most of those miles were under 5:50 as well, so very quick for a marathon. 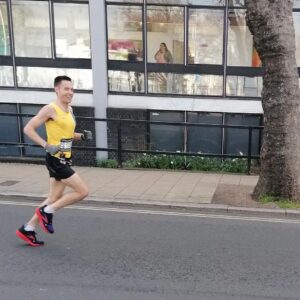 After that he started to suffer though and understandably his pace began to drop. He just needed to get to mile 20 and it was then all along the prom from there, heading out to the power station before turning and heading towards the finish.

Taking one final gel he braced himself for the final stretch. There was more loneliness to come up until mile 24. He tried to concentrate on keeping his form and running as efficiently as possible.

He was still going at around 6:20 pace for miles 21, 22 and 23 which, considering his fast first half, was pretty good going. It got very tough on the 24th and 25th miles and his pace dropped to just over 6:30 but he was still holding it together well. Then with the just the final mile and a bit to go, he found some inner strength to crank up the pace again to see it out. 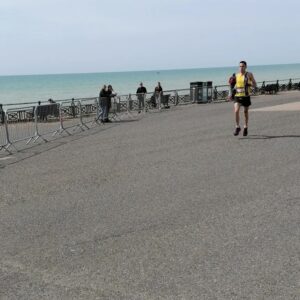 Turning the corner to see the finishing gantry, he noticed the clock hit 2 hours 37 minutes so he knew he was on for a PB. He now just needed to speed up, make sure he didn’t cramp and get to that finish line. And he did it!!

Registering a time of 2 hours 37 minutes and 31 seconds, it was a remarkable PB for Stu, shaving 2 minutes and 16 seconds off his Portsmouth Coastal Marathon time. That put him in an amazing 12th place out of 8,398 runners who successfully completed the course. It really was an outstanding achievement.

He was less than a minute behind Adam Holland which gives a good indication of the kind of standards we’re talking about. Adam is a very accomplished and well known long distance runner and he finished 10th in 2:36:27. 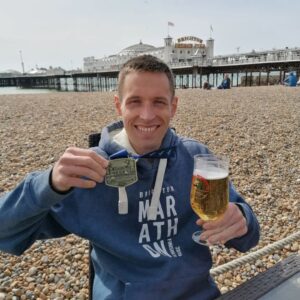 Stu was all smiles after an exhausting but awesome run

The race was won by Alix Ramsier who got round in a phenomenal 2:29:07. That was enough to put him just ahead of Ben Holmes who was second in 2:29:25. Then it was Will Green finishing a second on the wrong side of 2:30.

Stu saw Daniel Pope, who he knew from parkrun, on route, and offered support and high fives as he passed by. Daniel went on to finish in a superb time of 2:53:37 which put him in 95th place.

Thomas Corbin, who is a Poole parkrun regular, was there as well and he finished in an excellent time of 2:48:18 to claim 50th place. 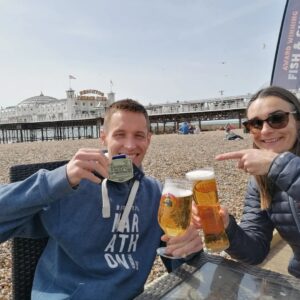 The distance for the activity came up at 26.3 miles and Stu’s average pace was an incredible 5:59. He also finished first out of 881 in the 30 to 34 category which was another reason to be proud of his effort. It moved him up to 52nd in the all-time Bournemouth AC marathon best list as well.

Melissah Gibson was first female, getting round in a very impressive time of 2:51:06 which put her in 67th place overall. Ania Gabb took 2nd female spot in a time of 2:52:43, which gave her 85th place overall. She’s one of Rich Brawn’s friends from his old club Dacorum & Tring and they’ve run a few 20 mile races together in the build up to marathons.

Next up for Stu it was back to basics, in a slightly less glamorous setting, for the North Dorset Village Marathon, which was the next race on the Dorset Road Race League calendar. With only Stu and Heather Khoshnevis running, BAC would not be fielding a men’s or women’s team for that fixture but even so, there was no doubt that Stu and Heather would do the club proud. And if he could put in a performance that came anywhere close to what he did at Brighton, Stu would surely be one of the main contenders for top spot. 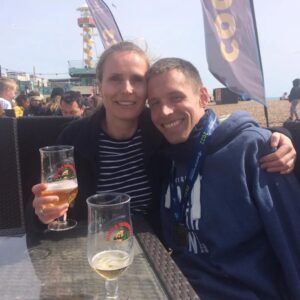