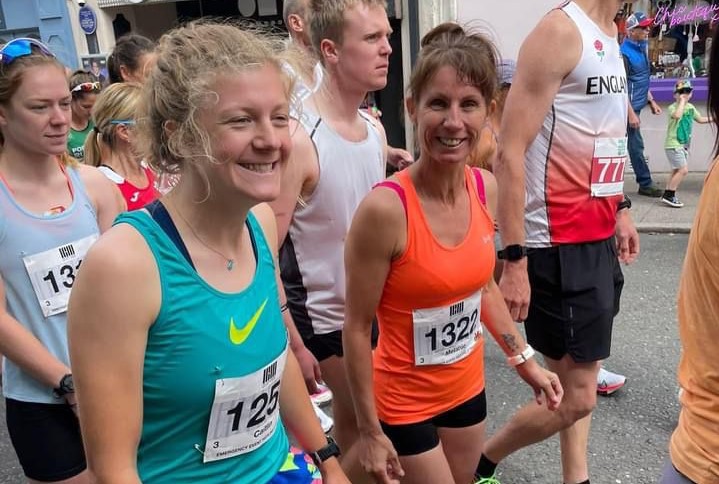 Imagine doing a half mile swim and a 70 mile bike ride, and a half marathon, all on the same weekend. Well that’s what Caitlin Peers did at the Long Course Weekend. In fact, she didn’t imagine it. She did it for real.

The Long Course Weekend is the biggest multisport festival in Europe, featuring over 12,000 athletes competing in an action-packed three days of enthralling endurance fuelled competition. Set in Pembrokeshire, on the west coast of Wales, it’s certainly enough to get the juices flowing for any top level or budding triathlete.

The event took place the weekend after Caitlin had performed heroics at the World Triathlon Sprint & Relay Championships in Montreal. She finished 6th in the Female 25-29 Age Group race and was also part of the team that finished 5th in the Mixed 20-29 Age Group Relay. It couldn’t have gone much better for Caitlin really and she came back absolutely buzzing about what she’d achieved. 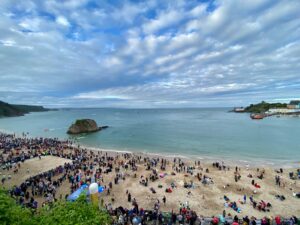 There was no time to rest on her laurels though. She needed to be fully focused on the task ahead to do well in the Half LCW. First up, it was the half mile swim which took place on the Friday evening. The water was quite choppy and Caitlin took quite a few whacks but she got through it in 39 minutes 52 seconds, which was 45th quickest out of a 358 strong field and 20th female out of 146.

The next morning it was time to jump on the road bike and head out for a 70 mile spin. It was a very hilly route though, incorporating almost 5,000ft of elevation. Caitlin really comes into her own on the bike though and she zoomed round in 3 hours 57 minutes and 55 seconds. That was enough to see her placed 19th in the overall standings out of 470 and she was 4th fastest woman.

That just left the Half Marathon for Caitlin to conquer on the Sunday. With a 70 mile hilly bike ride in her legs, and the long swim the day before that, she was always going to have to dig deep in the Half Marathon. That wasn’t a flat course either and featured 1,000ft of elevation.

Caitlin did have some new fast shoes she was thinking of wearing for it but she had such bad blisters from her exploits in Montreal the weekend before that she opted for her old trainers as she needed to prioritise comfort. 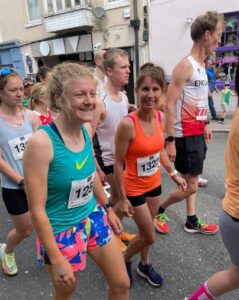 Caitlin Peers on the start line for the LCW Half Marathon

Starting off with a couple of sub-7-minute miles, it was then onto the first steep incline which lasted for most of the third mile. She was then able to pick up speed on the way back down for the next couple of miles before hitting a more slight incline on the sixth mile. Then it was back down again before tackling the next incline which led to the 8 mile point.

It wasn’t long before she had to negotiate another hill on the ninth mile before it plateaued a bit over the next couple of miles enabling Caitlin to get back to speed. The 12th mile contained a significant descent which she motored down before completing the last mile and getting over the final hump.

Ending with a fast finish, Caitlin crossed the line in 1 hour 35 minutes and 19 seconds which put her 78th on the leader-board out of 693 competitors. She was 23rd fastest female out of 302 and was 5th out of 76 in the senior female category. 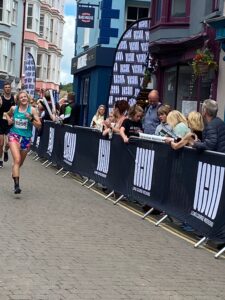 The question now was, where did that put her in the final standings after all three events had been completed? With a total cumulative time of 6 hours 13 minutes and 7 seconds, she’d taken 6th place in the overall leader-board out of 164. And she was 2nd placed woman out of 60. It really was an extremely impressive result for Caitlin.

In fact, the only lady who beat her was Carys Hughes, an elite woman who entered last minute. She finished in a total cumulative time of 5:39:20, which put her in 2nd place overall. Only one person in the competition was able to better that and that was Marc Davies of Nathan Ford Triathlon. He clocked a total combined time of 5:25:41.

Had Carys not entered the Half LCW late on, Caitlin would have been a comfortable winner in the women’s division. The next female in the final standings was Alice Watson and her cumulative time was 6:38:40, so over 15 minutes behind Caitlin.

The Full Long Course Weekend competition was won by Donald Brooks who finished with a total cumulative time of 8 hours 53 minutes and 36 seconds. He was victorious mainly because he was way faster than anyone else on the bike.

Completing the 112 miles in 5 hours 13 minutes and 30 seconds, he was over six minutes quicker than anyone else. That meant that even though Pamphiel Pareyn won the 2.4 mile Swim in 53 minutes 10 seconds and was 2nd in the Marathon in 2:38:11, he had to settle for the runner up spot. That was because he lost 12 minutes to Donald in the Sportive.

Her recent performances have shown that when it comes to multisport events, Caitlin is very much at the top of her game and in most races and competitions of that nature, she will certainly be a major contender.