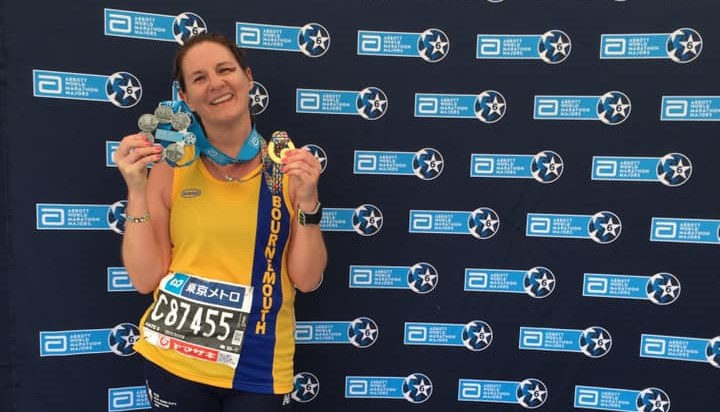 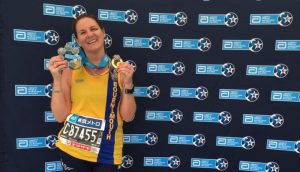 In the final piece of her World Marathon Major jigsaw, Caroline Rowley was taking on the Tokyo Marathon in a bid to secure that coveted ‘Six Star Medal’

The Abbot World Marathon Major ‘Six Star Medal’ is something most runners could only dream about. The prospect of running the London, Berlin, Boston, New York, Chicago and Tokyo Marathons almost seems like a fantasy. It’s a great idea in theory, but in practice it’s often unattainable.

However, if you want something bad enough, nothing is unattainable, and one lady who has proved that is Bournemouth AC’s very own globetrotting marathon enthusiast Caroline Rowley.

As the date of the 2019 Tokyo Marathon came around, it was set to be one of great significance to Caroline. It was indeed her 6th World Marathon Major, meaning she was in line to pick up her ‘Six Star Medal’. It was going to be a momentous occasion for Caroline – and one that even she herself couldn’t quite believe was about to happen.

Of course she had the small matter of completing the Tokyo Marathon first. The ‘Six Star Medal’ isn’t something that just gets given out willy-nilly. You have to earn it. Like she had done on the previous five occasions though, Caroline was more than willing to do that.

Although it’s a huge marathon, with over 35,000 people taking part, there were actually over 330,000 applicants wanting on it, so that gives an indication of just how popular to Tokyo Marathon is and how difficult it is to get a place.

Somehow, she managed it though and Caroline took to the start line knowing once she’s completed the 26.2 miles, she would be awarded one of the most coveted pieces of silverware in running folklore. 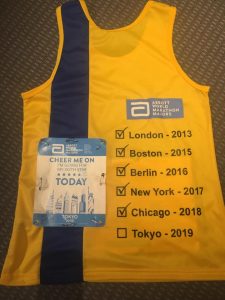 It was never going to be about time for Caroline in this particular marathon. Her achievement was an altogether different one than going for a specific target time. In a way, it went beyond that. It was about the experience.

Each one of the six World Marathon Majors she’d completed was about the experience. Travelling across the world, meeting so many different people and getting a taste of so many differing cultures.

That said, whenever she pulls on the yellow and blue, she has a natural inclination to give it her best and put everything she’s got into it and this occasion was no different.

It was only a short distance from there and Caroline soon found herself racing down the finishing straight. She’d done it. The dream had been realised and it was a fantastic moment for Caroline. 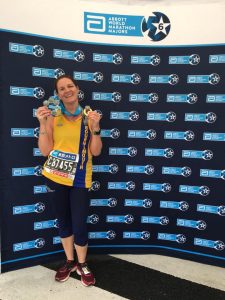 None of those stats really mattered to Caroline in the grand scheme of things though. What really mattered was putting that tick in the box next to name of her final World Marathon Major.

She was elated to have done it and to have realised her dream of completing all six of the World Marathon Majors. It had been a quite incredible journey that had seen Caroline combine her love of running with the opportunity to spend time in six wonderful cities.

The challenge for Caroline began back in 2013 when she completed the London Marathon in a time of 3:20:20. She didn’t even know back then though that that would form a piece of a much bigger jigsaw.

It was only after she ran the Boston Marathon in 2015 that she found about the ‘Six Star Medal’. From that moment on, the challenge was set.

A year later she would make the journey to Germany to conquer the Berlin Marathon, without even hitting the wall in the process. It was then New York in 2017 and her penultimate World Marathon Major of Chicago in 2018.

After spending some time in Tokyo, exploring the delights of what she found to be a beautiful city, Caroline returned to Bournemouth as World Marathon Major legend, adding her name to that prestige list of runners fortunate enough and dedicated enough to have managed to complete all six.

She hung her ‘Six Star Medal’ up alongside each of the six individual medals from each marathon, taking pride of place on the wall and serving as a reminder of some great times, some amazing experiences and a truly remarkable achievement. 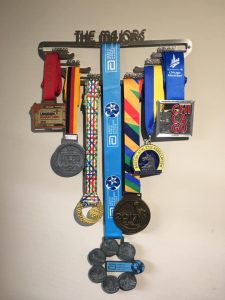