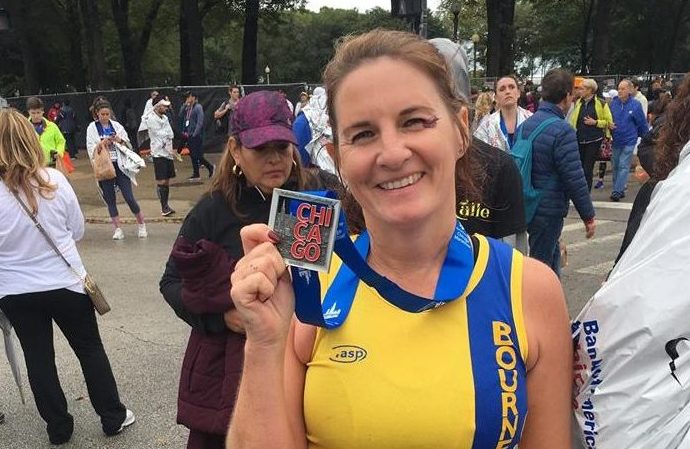 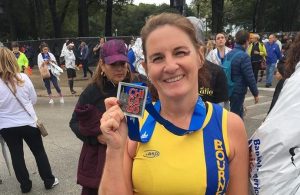 Mo Farrah’s magnificent victory in the Chicago Marathon may have captured all the headlines and stole the spotlight but he wasn’t the only athlete of interest from across the pond to feature in the race. Two Bournemouth AC members were also in the starting line up, with both Caroline Rowley and Tom Paskins jetting across to the Windy City to fly the infamous drapeau jaune-bleu .

Although the Chicago Marathon is a huge event in its own right, attracting a field of 45,000 runners, for Caroline and Tom, it was actually part of a bigger picture.

They are both on the road toward the coveted Six Star Medal which is awarded to athletes who complete all six races of the Abbott World Marathon Major distinction.

The six World Marathon Majors are London, New York, Boston, Berlin, Tokyo and Chicago. It’s no easy feat completing all six of those as it requires a lot of travelling and a lot of expense, along with a love and dedication to running that knows no bounds.

Both Caroline and Tom were well on their way though, with Caroline having already ticked four off the list and Tom having previously racked up three to his name.

The Chicago Marathon represented another huge stepping stone to bring them closer to the ultimate running accolade. They had to complete the race first though of course. Just being there wasn’t enough.

Off the back of basically no training, that was going to a battle in itself for Caroline. But she was determined to earn that finisher’s medal, whatever the weather. 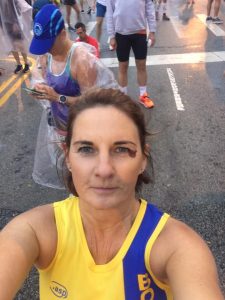 Starting off smoothly, she completed the first 5k in 28:47 before going through the 10k point in 57:09. She arrived at the half way stage in 2 hours 3 minutes and 28 seconds, which was a decent first half considering her lack of training.

The second half of the race became a bit of a challenge as her pace inevitably began to drop as she began to tire. In true BAC spirit though, she battled through the tough times and remained focus on her goal of getting to the finish line.

Towards the end of the race she bumped into a friend of hers who had made the journey over from Bournemouth with her. The pair ended up finishing together which made it all the more special for Caroline. 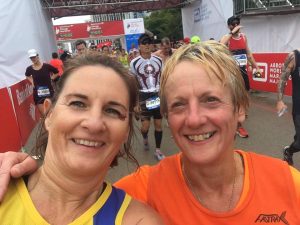 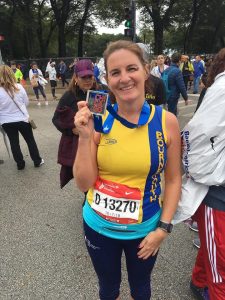 It was a decent result for Caroline under the circumstances but of course, none of that really mattered too much on this occasion. It was all about enjoying the race, making the most of her visit to another amazing city and bringing the bling back to Bournemouth with her when she returns. 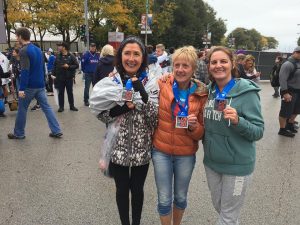 She did all that and now as her sights set firmly on Tokyo in 2019 where she will look to conquer her final race of the Abbott World Marathon Major selection. Then she will finally get her hands on the illustrious Six Star medal that she’s been craving for five years now, when her Marathon Major journey began. 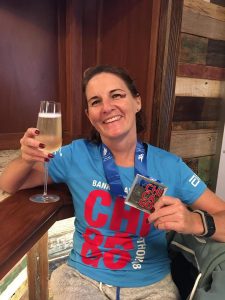 As for Tom, he was looking to make this his fourth Marathon Major success. He wasn’t going to be satisfied just to make it the finish line though. He was hoping for a sub-three hour time and had been training super hard to get himself into top form for the big day. That included building up a workload as big as 70 miles per week as he invested heavily in getting into prime condition.

Tom had previously run sub-three-hour marathons at both London and Berlin, so he knew the recipe for it and what kind of performance it would take to deliver on it. Last year he was over in the U.S. for the Boston Marathon, which he completed in 3 hours 6 minutes.

Boston is a tough one though as it contains some very difficult and exasperating inclines and often inclement weather conditions. On the day Tom ran it was extremely hot.

The Chicago Marathon is quite a fast, flat course though, which meant if Tom was at his best, he’d be in with a good chance of securing another sub-three.

It took him a little while to get used to the conditions though as, although it wasn’t hot, there was a lot of humidity in the air during the early stages of the race due to tall buildings in the city centre. This was combined with a cool breeze that hit you every so often.

It was in these early stages that Tom felt a little sluggish and fatigued from jet lag and not getting a great amount of sleep the previous two nights since arriving in the city.

He was in amongst the three-hour pacers though so just tried to remain calm and relaxed and keep to a steady pace. Once he’d settled into a good consistent rhythm he was okay and at around the 8 mile point, he started to pick the pace up.

By this point it had started to rain a persistently but it was only light rain which actually helped him cool down. He stayed strong until the half way point, arriving in a time of 1:28:29.

At this point, he began to doubt his chances of doing a sub-three since the second halves of his marathons are typically around five minutes slower than the first half.

He continued to push hard though managing to catch the lead three-hour pacemaker at mile 16. He stayed with the pacemaker and the group around him, working together with others in the group to keep each other motivated and strong through the no man’s land miles.

At mile 20, he found he was starting to pull away from the pacer and at the point he thought it was just him against the clock now and pushed on further.

Feeding off of the energy from the crowd and with a few much need gels as the inevitable fatigue began to kick in and became more and more evident with each mile that passed.

Eventually he reached the 800 metres to go banner, knowing by that point that he was going to well under three hours. It was then just the small matter of getting over the final hill and over the bridge on E Roosevelt Road before arriving on the finishing straight in Grant Park.

Although it was only short, the final climb seemed like a mountain after all the hard miles that had gone before it. Tom made it up there in one piece though and was then all set for a nice downhill run-in before turning onto S Columbus Drive and reaching the finish line. 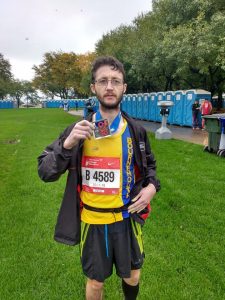 Finishing in an impressive time of 2:56:46, Tom kept a very consistent pace throughout the race

Looking at his splits after, Tom was pleased to notice that his pace hadn’t really dropped at all the second half of the race. In fact, he had actually run negative split by 12 seconds, which was something he’d never done before in a marathon.

Medals, water, protein bars, and most importantly, a can of Chicago’s very own Goose Island 26.2 beer were waiting for all the runners on arrival at the finish. 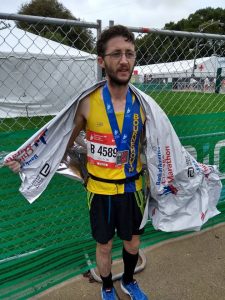 Overall, it was a great experience for Tom and a fantastic feeling to be one step closer to getting that Six Star finisher medal.

Amazingly, both Mo Farah and David Weir were on the same flight back as Tom. He was standing in the boarding cue when all of a sudden Mo Farah appeared in front of him, having been called for priority boarding. Then David Weir was sitting just two rows in front of him on the flight. Surprisingly, neither of them asked for a selfie with Tom though. Perhaps they were a little too star-struck. 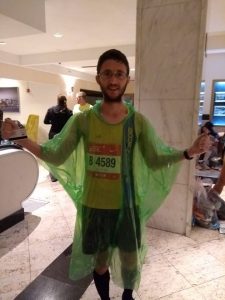