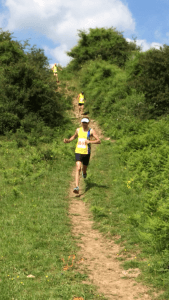 Congratulations to Toby Chapman who was second in the Cheddar Gorge Half Marathon on 22 June. This race is part of the Cheddar Gorge Challenge, a series of races of different distances over a period of time all in the Cheddar Gorge area. Toby‘s time was 1.37.58 on an off-road, very hilly course.
A week later Jez Bragg competed in the Western States 100, a 100 Mile (yes, mile!) Endurance Run from Squaw Valley to Auburn in – you’ve guessed it! – California, USA. Jez, we know, was 19th at mile 40 and 24 minutes off the lead, and it’s believed that he finished an astonishing 11th, time unknown, but 10th position was 16.36.42. Amazing!
Turning to the Parkruns, in Kings Park on Saturday 28 June, Paul Hill was second overall in the Bournemouth Parkrun, and Bridget Dence and Nikki Sandell were first and second ladies respectively (Nikki first in her age group). Also running were Jud Kirk (who had been the Bournemouth Parkrun ‘runner of the week’ on 21 June), Steve Cox, Joe Price, Jim Dence, Tom Cochrane (first in his age group) and Will Price. Meanwhile, in Poole Park, our youngsters were showing the way in the Poole Parkrun, with Jamie Grose winning overall, and Joe Arundel in 5th place.
A Facebook entry reveals that Paul Consani has completed his first triathlon of the season, and was first male, and there’s a rumour that Simon Hearn, and Joe and Will Price ran in the Moors Valley Summer Solstace on 20 June, but full results don’t appear to be available.