Chris O’Brien and companion kill it at Endure 24 Reading 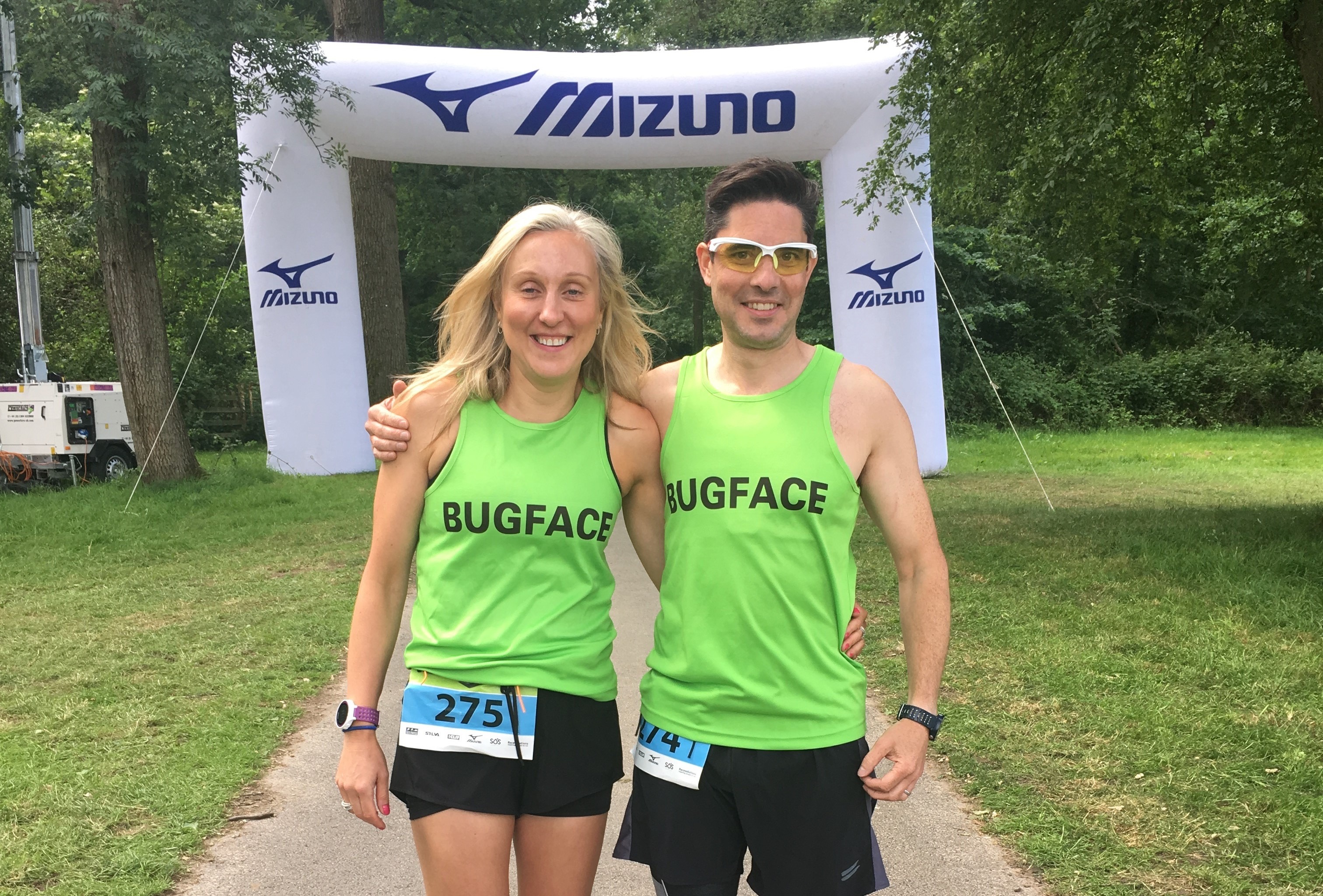 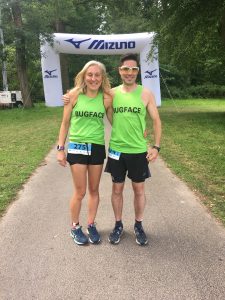 It was that time of year again for Chris O’Brien where he heads over to Reading to take part in the annual Endure 24 event. The general premise of Endure 24 is to complete as many circa-5-mile laps as you possibly can during the course of the 24 hour period.

The task can be undertaken in teams of 8, teams of 5, as a pair or as a solo runner. And there is a category for male, female and mixed for each of those. Of course, the more laps completed – the more distance you covered, so essentially the aim is the run as far as you can within the allotted time.

Last year Chris took the challenge on as part of a team of 4, completing 7 laps and contributing a total of 40 miles to his team’s overall number.

Running the event as one half of a mixed pair for this year, Chris knew that this time round he would be negotiating a much higher number laps than last year and thus racking up a significantly higher mileage. It was going to be a big challenge but an exciting one for Chris and one that would undoubtedly take him to his limits.

Partnering Chris for the event as the other half of team Bugface, it was the lovely Emma Draper. The pair went into the event without any real expectations other than perhaps having an outside chance at finishing in the top 10. 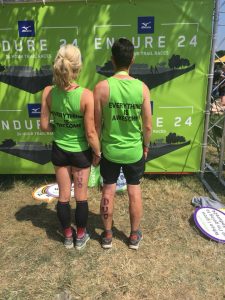 Having not really done any specific training tailored for the event and having spent a significant part of the year on the sidelines through injury, Chris was unsure how he would cope with the distance. The injury he’d picked up had cost him the opportunity to run the London Marathon this year, although he did manage to defer entry.

The terrain on the course was pretty harsh with it being mostly on very hard ground, either on a stony track or hard, lumpy grass. It wasn’t overly forgiving for the legs when having to run on it repetitively for 24 hours. Still, that was all part of the fun!

Originally they’d planned to take it in turns to do a lap each throughout the day, then over night they were intending on doing three double laps each to allow the other person to get some sleep in between. 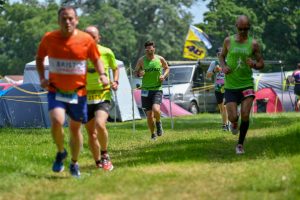 Chris makes his way across the grassy section of the course

By early evening they’d discovered they were in 3rd place in the standings for the mixed pairs. That gave them the motivation to push as hard as they could be the remainder of the event, knowing they were right up there.

At 9:20pm it was time for Chris to set off for his 7th lap and he’d already racked up nearly 30 miles. It was beginning to get tough but he still managed to get through it at 9:46 pace.

As night fell, for his next outing he went for a double lap, starting it at 11:10pm and finishing it at 12:50. That gave him a bit of respite whilst Emma was doing her double lap, meaning he didn’t need to set off for his next lap until 3am. 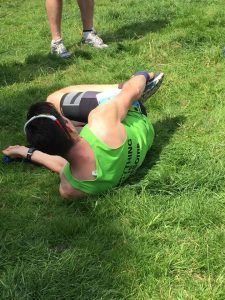 Chris had clearly misunderstood the meaning of ‘fell running’

Doing a double lap though (almost 10 miles) on really tired legs was awfully difficult. And they found that the break wasn’t enough time to get any actual sleep either and it made it much harder to get going again afterwards.

They switched back to doing single laps after that and it seemed to work better for them as they were able to stay alert during the breaks.

At one point in the night they even had a brief stint in 2nd place before dropping back down the 3rd in the early hours of Sunday morning.

Chris started his 11th lap at 4:48 am and completed it at an average pace of 10:24 m/m. He and Emma continued to churn out the laps relentlessly as the day wore on. They managed two more laps each before Chris started on his 14th and final lap at 10:44 am. 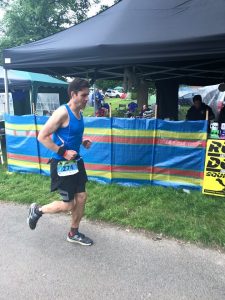 Tired and weary, Chris gets his 14th and final lap underway

That was it after that. They’d done all they could and since there was a condition whereby you had to have started the final lap by 12 pm and had to have completed it by the cut off time of 1 pm, team Bugface were happy to stick with what they’d got.

Incredibly, Chris had covered just shy of 70 miles of the duration of the 24 hours and Emma had managed 65 herself. It was an absolutely monumental effort from the pair of them and they could certainly say that they’d given everything they had. It was now over the organisers to tot everything up and work out the final standings. 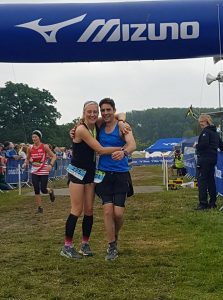 Chris and Emma had done themselves proud, having continued alternating laps with no sleep throughout the entire duration

It had been a really close call between Bugface and team that was in 2nd, the Wackey Hogs for a substantial part of the event. There was little to choose between the two and after the 24 hours had elapsed there was some confusion of which of the two teams had actually come out on top.

In the end it turned out Wacky Hogs had pipped them to post, finishing on 29 laps, with Bugface on 27, courtesy of Chris‘s 14 laps and Emma‘s 13. That meant they’d chalked up a massive 135 miles between them. They were over the moon with that result though considering they’d not really had any expectations to begin with. 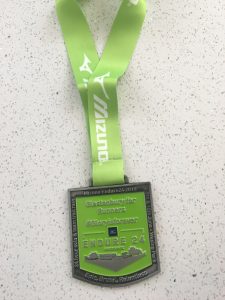 Ever since finding out they were in 3rd place 6 hours into the event, they’d managed to hold onto the position. In fact, over the duration, they had managed in increase the gap between themselves and the He-man and Ve-gan team who finished 4th on 23 laps.

Impressively, Chris had ran 30 more miles this year than he did the previous year as part of a team of 4, so that was quite an increase. Who knows what he could accomplish next year? Perhaps even a tilt as a solo runner could be on the cards, although when that was put to him, he was very quick to stress how much he loved doing it with Emma and how well they worked together as pair. 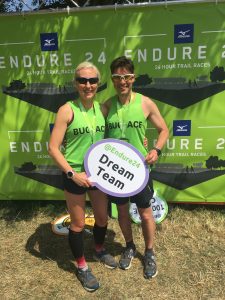 Completing a total of 27 laps and 135 miles between them, Chris and Emma were extremely pleased with their 3rd place finish