Chris O’Brien gets bitten by the ultra bug 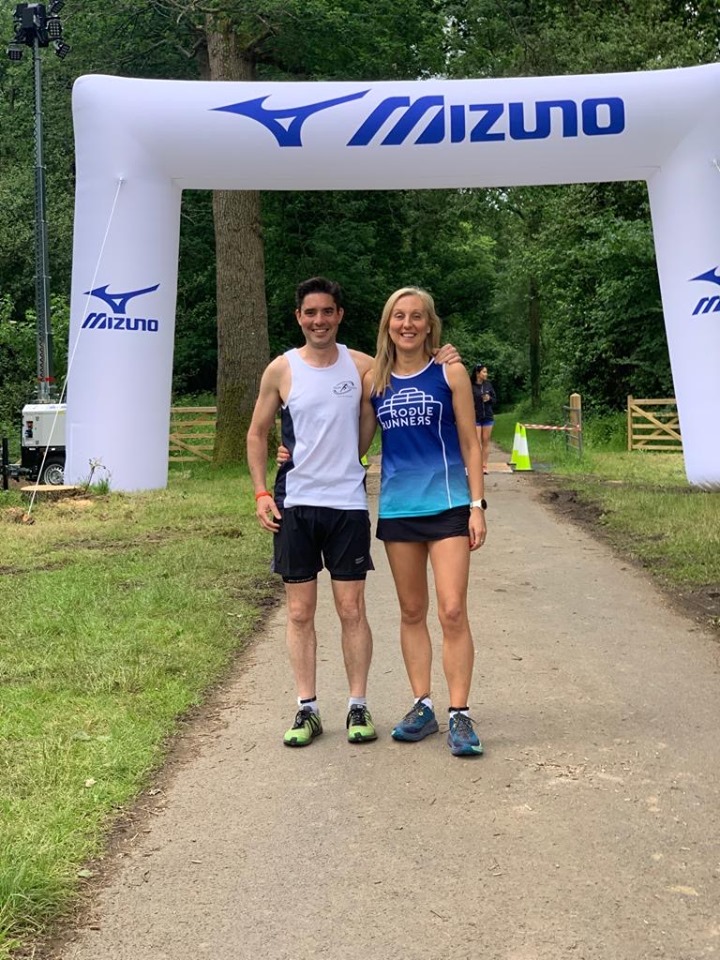 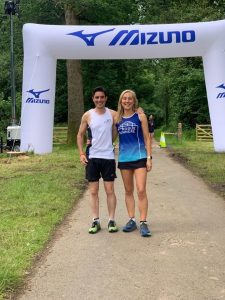 For the second year running, Chris O’Brien teamed up with Emma Draper to take on the Endure 24 event as a mixed pair

Following his epic 14-lap, nigh on 70-mile relentless grind at last year’s Endure 24 event in Reading, Chris O’Brien’s initial reaction was to place the activity in the ‘it was fun, but never again’ filing cabinet and slam the drawer firmly shut.

Running is a funny thing though. In the immediate aftermath of a race, you remember the pain and suffering that you went through. The agony and the hardship are very vivid and prominent in the mind.

Over time though, those memories tend to fade. You remember the feeling of achievement, the ecstasy of success and the thrill of the chase. But you forget about the troubles along the way. The pain and the strife gradually dissipate from conscious recollection.

That might be why, when propositioned again by his Team BugFace  partner in crime, Emma Draper, about lining up for the event as a mixed pair again, he somehow found himself agreeing.

Shortly afterwards he began to wonder, what on earth was he thinking?? It was too late by then though. He’d already agreed to it and there was no backing out now. He had to face the music and run.

It was to be Chris’s fifth year at the event. The first two years he’d completed it was part of a team of five. In 2017, one member of the team was forced to pull out through injury which left them with just four members.

When they had a team of five, Chris’s team had tended to do pretty well, finishing just outside the top four. Of course, it was a little more difficult with only four.

Completing 35 milers in the first two years and 40 miles the following year, Chris had certainly made a valuable contribution to the success of his team.

Last year was the first time he and Emma had decided to give it a go as a mixed pair, which put them in a different category altogether. Of course, it meant the running was a lot more regular and the rest time was significantly less before he found himself back out there for another lap.

Somehow, Chris managed to get through 14 laps, with Emma completing 13. That was a enough to see them wind up with almost 135 miles between them, putting them in  3rd place.

Training hadn’t gone so well for either of them this time round though and they weren’t feeling as fit as they were the previous year.

As a consequence, they agreed to just take it easy and do what they could, so no pressure.  Deep down though, both Chris and Emma have a competitive edge and they didn’t want to slip down too far from the third place they obtained last time round. In truth, they were looking for at least a top-ten finish. 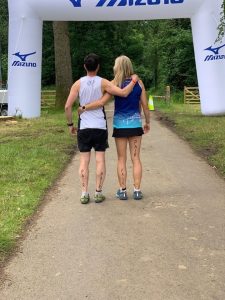 Unfortunately for them though, and all the other competitors, the course was made that much more difficult this year by the conditions. It had rained a lot and the ground was wet, leaving the route extremely muddy in places.

Completing his first 4.87 mile lap in exactly 37 minutes, at an average pace of 7:35 minutes per mile, that was it. He’d started it now. He’d got the ball rolling. All he had to do was keep it rolling for the next 23 hours and 23 minutes.

Emma successfully completed her first lap as well and the race was on. Chris completed his second lap in just under 38 minutes, which was 8 minute mile pace and then pretty much the same for his third lap.

After completing his third lap, Chris was caked in mud and already feeling exhausted. Emma hadn’t had any sleep the night before due to an upset stomach so Chris said to her that he didn’t mind if they called it a day.

Secretly hoping she’d say yes, he got a firm “No, I’m fine. I’ll keep going” response from Emma. For the next couple of laps he mentioned it again to Emma, desperately trying to avert the continuation of this torture. But Emma was determined to continue.

At one point one of Emma’s friends popped her head into his tent whilst he was resting to check that he wasn’t going to quit. What could he say though? He couldn’t let Emma down. And that gave him the proverbial kick up the jacksy that he needed. Like it or not, he was in it for the long haul.

By 5pm Chris had completed his fourth lap and they were sitting in 3rd place out of the 36 mixed pairs in the competition. That was a good incentive for Chris to keep going and keep the pace up.

The next couple of laps he completed in around 43-and-a-half minutes, so at an average pace of just under 9 minutes per mile. That took him up to nearly 30 miles already. But there was still a long way to go. It was only just after 8pm.

Chris managed to fit two more laps in before midnight, finishing each of them in 45 minutes and 42 seconds, at an average pace of 9:21 minutes per mile. He was still going well but it was only the half way stage in the proceedings. He’d now covered close to 40 miles.

For a while Chris and Emma had slipped to 4th place in the rankings but were now back up to 3rd. It was very tight between the two teams though and still all the play for.

The overnight laps were a little more tricky to negotiate, with those on shift having to feel their way through the slippery mud in pitch black, with only the lights from their head torches to guide them.

The course was mixed terrain, taking in some lovely forest tracks and countryside paths. There were a few hills in there as well, just to take the difficulty level up a notch further.

At the half way point in the course there were some crazy folk blasting out rock and roll music from a camper van and handing out cocktails which provided a brief bit of respite.

The mud began to dry out a touch over night, making it less slippery and more thick and gloopy. It had rained a lot on Saturday lunchtime when the race started but had eased off as the day went on.

For his overnight laps, Chris was down to about 10 minute miling but he was still completing them in under 50 minutes. Emma was running most of her laps in around an hour by this point so that meant Chris was getting slightly more rest between laps than she was.

If you take away the time it takes to get from the changeover point to the tent and factor in a toilet stop and some time to refuel and eat something, that doesn’t leave a lot of time though before you’re back out there. hris couldn’t really risk sleeping either as he needed to make sure he was there to take over whenever Emma completed her lap.

Chris started his 12th lap at 6:50am so it was getting light again by then. He managed a quicker lap that time, taking only 47 minutes before passing on the baton.

Then whilst Emma was out on the course there was another huge downpour that not only drenched her but also turned some sections of the course into a quagmire reminiscent of a wet and muddy farmyard that had been driven through several times by a tractor.

One advantage of doing so many laps for Chris though was that he knew the course so well that he was able to find the paths least trodden which helped him get through some of the tougher sections.

They were now a lap ahead of the team in 4th place and only a lap behind the team who was in 2nd. Time was running out though and they knew they were unlikely to catch up.

The event organisers had to divert some parts of the course as they were in such a bad condition meaning Chris’s 13th lap was slightly longer. He ran well though to finish it in 48:48.

Emma got one more lap in before Chris embarked upon his 14th and final lap. Again, he got round with no trouble, completing it in 49:20, bringing his total mileage up to a flabbergasting 70 miles.

Even though the 4th placed team had stopped running at 25 laps, Emma was keen to get her final lap in before the event ended. She did just that, brining her total up to 14 laps and 70 miles, the same as Chris. 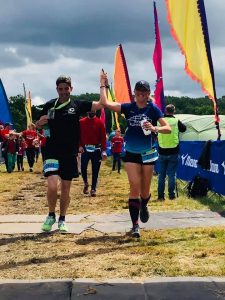 Chris and Emma cross the line together for the final time, having completed an amazing 14 laps each of the 5-mile circuit

That gave them a finishing total of 28 laps which was an absolutely staggering effort. In fact, it was many laps as anyone did, as the top two teams also finished up on 28 laps. The only difference was, they’d completed them in a slightly faster time. 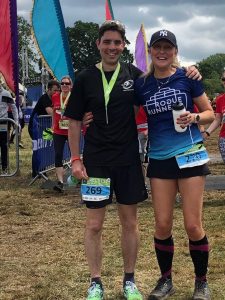 It really was a hell of a performance by Chris and Emma and they’d been rewarded for it with a 3rd placed finish, which they were over the moon about.

Emma had ran five miles further than she did in last year’s event and Chris had completed the same amount of laps but had done it 38 minutes faster than he did last year, with his total running time standing at 10 hours 40 minutes and 17 seconds.

It was a remarkable achievement from the pair of them, particularly given that their training had been patchy at best and the preparation for it less than ideal. 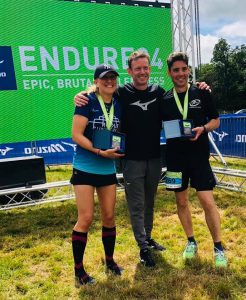 What they did have in abundance though was heart, and that was what mattered most in this event. It was about determination and an unshakeable desire to keep going, regardless of what obstacles were put in their way.

The overwhelming lesson from this story is, never give up. Chris could have easily thrown the towel in after the first three laps. He was already feeling tired and less than optimistic about their chances.

But instead of jacking it in, he stuck out and eventually got into a rhythm and he went from strength to strength, knocking out the laps with relentless precision.

Sometimes in running, to get the best results, you have to persevere through the bad times in order to make it through to see the good times. That’s where heart and desire and grit and determination come into play. As Chris and Emma proved in this event, If you have enough of those qualities, you can conquer anything. 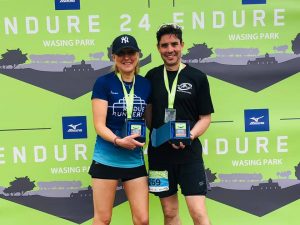 Completing 14 laps and running almost 70 miles each, Chris and Emma will no doubt look back on this 24 hours with immense pride