Chris O’Brien racks up the mileage at Endure 24 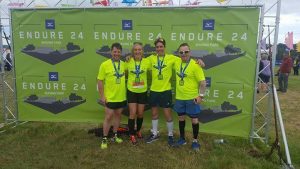 Chris O’Brien took part in Endure 24 over the weekend which, as the  name suggests, is a 24 hour endurance running event where the task is to complete as many 5 mile laps of the woodland trail course as possible.

The race can be done as part of a small team (3 to 5), a larger team (6 to 8), in pairs or as a solo runner. The number of laps done by each team, pair or individual are then added together at the end and compared against others of the same type to see who has covered the most distance.

The event was held at Washing Park in Reading, where camping space is provided for the participants so they can rest between laps and enjoy the lively atmosphere of the race village as the event progresses.

Chris took on the challenge as part of a mixed team of four and was going to the race knowing he’ll be suffering from severe jet lag having only just flown back from Arizona the night before.

Despite that though, Chris was determined to take part in the event due to his incredible commitment to raise money for “Batten Fighters Forever”, a charity that raises money for those effected by this rare inherited disorder affecting the nervous system causing numerous difficulties and ultimately premature death.

This was far from the ideal preparation for an event of such magnitude and for such a huge physical and mental challenge. But Chris demonstrated tremendous commitment to the cause and was determined to see it through.

It was originally intended to be a team of five but one member had pulled out due to injury, meaning already they were starting with a handicap. Of the other teammates that were taking part, one of them, Mark, had an inured ankle and another one, Emma, was suffering from the remnants of concussion and skull issues caused by a face plant onto the pavement five weeks ago. The other team member, Mick, was fortunatelty not carrying any injury.

Chris and his team put their fragilities behind them and set off on their way. The plan was for each team member to run one lap before handing over to the next in a continuous relay throughout the duration of the event.

Chris got the ball rolling by running two laps, since they couldn’t be sure at this point how many laps Mark and Emma would be able to manage. He then handed over to Emma, where the one lap pattern began, ensuring the team had one runner out on the course at all times. This gave each of them around a two and half hour window between laps to rest and recouperate.

As if it wasn’t going to be hard enough as it is, there was some further drama for Chris to contend with on his first lap when he got a stone stuck in his shoe. Rather unusually, the stone had actually pierced the bottom of his trainer and gone right the way through and cut his foot. This was not the ideal start but Chris bandaged it up and soldiered on.

The one lap routine continued until Chris has completed his fifth lap by approximately 2.25am. None of them had had any sleep any then so they decided to take a two hour break. Chris managed to get one and a half hour’s sleep before the running resumed with Emma kicking off the one lap each sequence. 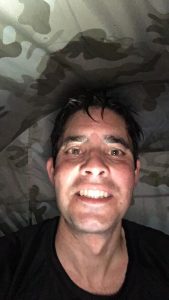 This continued until Chris had done his seventh lap, equating to an astounding 35 miles. Emma wanted to do one more lap so she went on to do her seventh lap before all four members of the team walked the final lap together. That took Chris’s total mileage for the event up to a massive 40 miles. Not bad for a guy suffering from jet lag, a severe lack of sleep and a stone through his foot!

As a team they covered a total of 27 laps, which equates to a total of 135 miles between them. This put them 81st out of 138 teams of 3 to 5 people. Putting the competitive element to one side though, it was really all about raising as much money as they possibly could for the charity and enjoying the team spirit, camaraderie and togetherness that a 24 hour running event brings. In those respects, Chris and his team were absolutely triumphant.