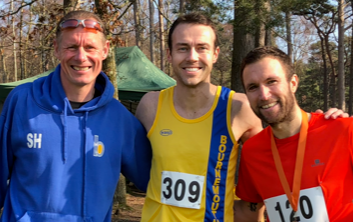 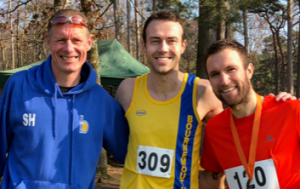 Organised by the Hope Rising, a Christian charity that helps people in need in different places around the world, the Avon Trail Run was a good way for athletes to get their cross-country fix in the off-season.

The ‘Tyrrell Trail’ Cross-Country Run was staged at the beautifully scenic Avon Tyrrell Outdoor Activity Centre and it as the eighth time the event had been held at that location.

Off the back of some excellent performances in the Wessex League Cross Country fixtures, Chris Phelan-Heath was keen to take to the trails again, looking for success in the 5k race.

Simon Hearn and Trevor Elkins opted for the 10k route, hoping they’d be able to negotiate their way across the muddy ground and twisty tracks quickly and competitively.

It was an unseasonably sunny and mild day as a group of just over 180 prepared to tackle the challenging course. Both races started at the same time, with the 5k consisting on one loop and the 10k being made up of two loops.

There were fast flat sections, demanding climbs, twisty downhills, plenty of mud and some water sections for the runners to contend with. It was actually quite technically tricky and with all the tree roots to avoid and the boggy bits to get through, it certainly kept the participants on their toes throughout.

Setting off quite quickly, Chris Phelan-Heath decided to take the race on and he wasn’t taking any prisoners. The only man who could get close to him was Alastair Pickburne of New Forest Runners.

Although Chris was doing the 5k race, he didn’t know which distance Alastair was doing so that kept him driving on to get round as quickly as possible and try to maintain his lead.

Getting to the line in a time of 20:46, Chris took a very strong win in what was a pretty decent time for such a testing course. As it turned out, Alastair was actually doing the 10k race so he went round for his second loop. 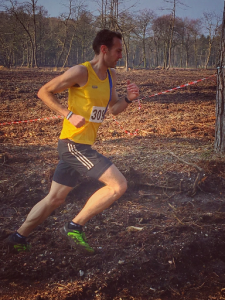 The next athlete over the line in the 5k race was Ross Wayne of Purbeck Runners who was over three-and-a-half minutes behind Chris, registering a time of 24:22.

33 people in total opted for the 5k distance, with 12 men and 21 women in the mix. The first women to arrive at the finish was Fay Abramson who clocked a time of 28:15.

In the 10k race, it was Alastair Pickburne who got the win, reaching the line in a time of 43:32. Darryl Still of Hardley Runners was 2nd in a time of 44:02 before Trevor Elkins arrived to take a very good 3rd place, registering a time of 45:05.

Trevor seems to be getting his running mojo back now after some turbulent times and is now finding new ways to push himself and feeling stronger than ever. 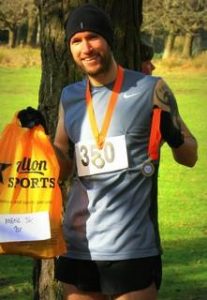 All the twists and turns made it difficult to gather a good pace and momentum throughout but that was all part of the challenge and Trev was very pleased with his run.

Following some strong runs in the Hampshire League cross country, Simon Hearn was well adept at dealing with this type of terrain. That didn’t make it any easier though and he still found the course to be extremely demanding.

Managing to cope with the rigours of the forest tracks very well though, Simon crossed the line in 7th place with an impressive time of 47:17.

Despite the challenging nature of the course, Chris, Trev and Simon all thoroughly enjoyed the race and it was certainly a decent off-road training run for all of them and a true fitness tester if ever there was one. 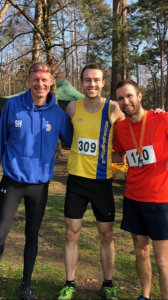 Simon, Chris and Trevor all ran well in their respective races and enjoyed giving their best on a very difficult circuit