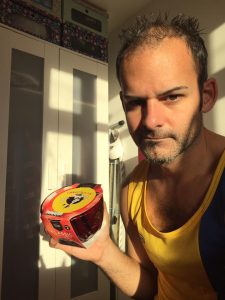 There was plenty of activity this weekend with a well-attended Christmas 10k, BAC wins at the Dorset County Cross Country Championships (David Long) and the Bovington Marathon (Jez Bragg), but perhaps with Damian Boyle outshining everyone in a mountainous 100k trail race starting and finishing in Cape Town, South Africa.

Taking place at the same time, unfortunately, was the final Wessex Cross League fixture of the season, which also doubled as the Dorset Cross Country Championship, at Bryanston School.  The results aren’t yet available, but we know from a video posted on Facebook by Brandon Meredith that David Long managed to hold off Jamie Grose to win the Championship, and that Marcus O’Toole and Brandon himself were also competing, and that Brandon was 13th overall in the SM/U20M race, and was 6th U20.  It’s believed that the some or all of the Sandell family were also competing at Bryanston, but there will be a further report after the full results have become available.

Further west in Dorset, also taking place at the same time, was the Bovington Marathon, an off road event starting and finishing at the Bovington Tank Museum.  Full results aren’t available, but we do know that Jez Bragg tanked round the course to win in a time of 3.08.21.  Andy Gillespie was also competing, and finished “hard on Jez‘s heels”, 89th in 4.24.4.  Andy describes the course as “a bit muddy in places, but 90% gravel trails and woodland paths”.  According to the website the distance is 26.2 (ish) miles. 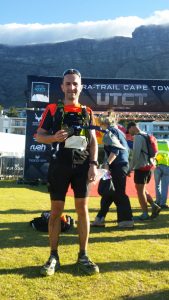 Damian Boyle and medals after completing a 100k challenge which took in Table Mountain, in the background

Further afield, Damian Boyle was tackling the 100k Ultra Trail Cape Town, starting and finishing in Cape Town, and taking in Table Mountain and two other mountains (14500′).  Of the 64 finishers, Damian was 16th, and 3rd Vet, in a time of 13 hrs 57 mins and 31 secs.  This is the longest race in which Damian has competed, and he describes it as “an incredible race in most spectacular surroundings”, and a race which can be recommended to all our Ultra runners.

A couple of the views enjoyed by Damian…………… 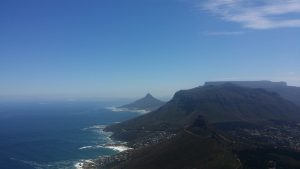 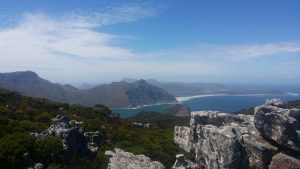