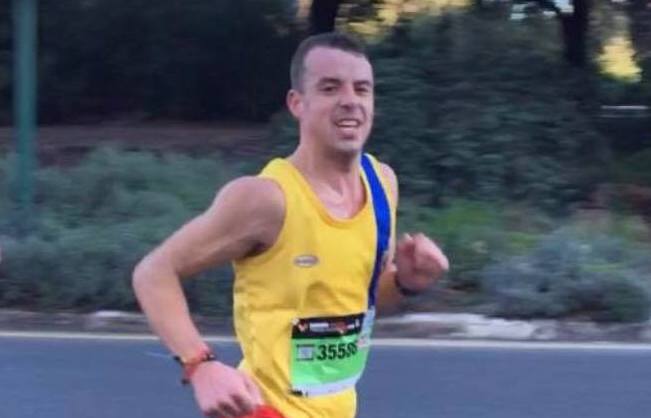 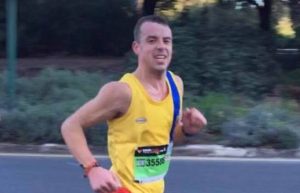 Craig Palmer was looking for a performance to remember at the Valencia Marathon, as was his Bournemouth AC teammate Sanjai Sharma

Known for being one of the fastest and flattest large-scale marathons in Europe, Valencia provides the perfect stage for runners to realise their marathon potential.

That’s exactly what Craig Palmer and Sanjai Sharma were hoping to do when they travelled over to the delightful Spanish city to give it all they’ve got in the Valencia Marathon.

The conditions were excellent for long distance running as the Bournemouth AC pair lined up in the streets of Valencia with over 19,000 others, all looking to put in a performance they could be proud of.

In fact, there would have been three BAC men taking to the start-line but sadly Simon Way was unable to run due to a hip injury he picked up in training. He thinks it may even be bursitis which, if confirmed, will put him on the side-lines for quite some time.

Having already booked the trip out there with Sanjai though, Simon went along anyway to enjoy exploring the wonders of the city and also be on hand to support Sanjai and Craig as they progressed along the route. 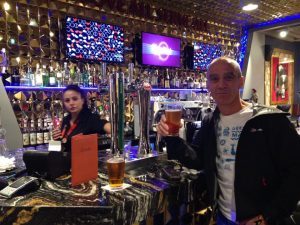 Having been ruled out of the race with a hip injury, Simon Way was forced watch on from the side-lines but it meant he had more time to sample the local delicacies

With his best marathon time of 2:30:46 having been registered at the London Marathon in 2017, Craig knew he’d have to produce something truly special to have any chance of eclipsing that.

As for Sanjai, he was targeting a time of 2 hours 50 minutes, which was always going to be a real challenge but he’d trained hard for it and brought with him a wealth of marathon running experience to call on.

It was destined to be a memorable day for both Bournemouth AC members as each managed to produce a terrific run. The course is predominantly suburban but includes a very scenic stretch along the Mediterranean coastline.

The route incorporates areas of the city where the Formula 1 Grand Prix and the Americas Cup were hosted. The stunning Ciudad de la Artes y las Ciencias (City of Arts and Sciences) provides the starting and finish points of the race. On the approach to the finish, the runners pass over the shimmering blue pools of the Museo de las Ciencias (Science Museum).

Craig set off at somewhere between 5:40 and 5:50 pace and went through the first 10k in exactly 18 minutes. He then proceeded to reach the 10k point in 36:04, so he was running remarkably consistently at that stage. He went on to arrive at the half way point in 1:15:31.

Even if he could match that in the second half of the race though, it wouldn’t quite equal his previous best, but it would still be a top-quality run.

For the next four miles he was hovering at around 5:40 pace before putting in an even quicker mile at mile 18. His splits continued to be impressive and on the 21st mile he began to ramp up the pace yet further.

A 5:33 mile at mile 22 demonstrated how strong he was feeling in the latter stages of the race and it was beginning to look like his second half of the race was going to be remarkable.

With a PB in reach and a negative split looking increasingly likely, Craig soared through the last two miles in splits of 5:30 and 5:28 to get to the final sector in fine fettle.

Hurtling toward the finish and an even quicker pace, Craig crossed the line in a quite incredible time of 2:29:16. In doing so, he’d joined a very exclusive list of BAC runners who have completed a marathon in under 2-and-a-half hours. It was a dream race for Craig and he couldn’t really have done it any better.

He’d run a 1:13:45 for the second half of the race, giving him an phenomenal negative split. That time was good enough to see him place in the top hundred, which is some achievement in a field of 19,246 runners.

In fact, it put him 95th place, which was an absolutely outstanding effort. He was the 11th best British runner out of 748, crowning an incredibly successful outing for Craig. 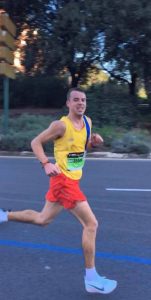 A textbook performance from Craig saw him run a perfect negative split to end up with a place on the esteemed BAC sub-2:30 list

It was a steady start to the race for Sanjai, who went through the first 5k in 20 minutes 31 seconds. Arriving at the 10k point in 40:43, it was again a very consistent pace for early part of the race.

Reaching the half marathon point in 1:25:18, Sanjai was pretty much bang on schedule for the time he was anticipating. He would have to run the second half of the race just as quickly though so that wouldn’t be easy.

Sanjai has produced a few marathons of around the 2:50 mark over recent years though so he knows what it takes and how to manage a race in order to achieve that sort of time.

Having increased the pace up slightly over the last 10 kilometres, Sanjai kept on at that same speed for the next 5k, arriving at the 25km point in 1 hour 41 minutes. 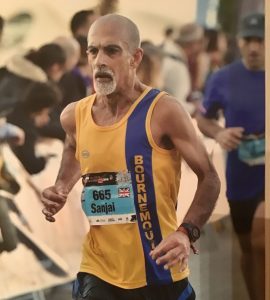 Sanjai was able to gradually increase the pace as the race went on, firmly focused on his goal of a 2:50 finish

He then managed to crank the pace up a notch again for the next 10k, getting to the 35km point in 2 hours and 1 minute. As he got to the 23 mile point, he knew he was almost there but had to keep pushing over the last 5k.

It was at this point that his body began to overheat a little. His determination took over though and he got his head down and dug in. It was then that his strength really began to show.

Finding himself able to go even faster over the last few miles, he went through the 40k point in 2:22. That left just the final couple of kilometres to power through.

Arriving on the finishing straight, Sanjai had in fact ran his fastest few miles of the entire race in the last three and crossed the line in a tremendous time of 2:49:24. 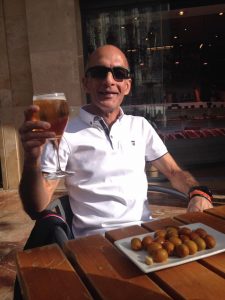 Sanjai enjoys a well earned beverage after his impressive endeavours

That put him in 704th place overall and a very impressive 9th place in the M55 category. That was out of 859 runners in the category. He was also the 57th best British runner out of 748. It was a really pleasing performance from Sanjai and he was chuffed to have bettered the time he was aiming for.

All that remained now was for Sanjai and Craig to meet up with Simon and begin their refuelling strategy, which of course meant getting on the beers and the tapas.

They would both return home to not-so-sunny Dorset having done themselves and their club extremely proud and having also enjoyed a very nice city break in the process. 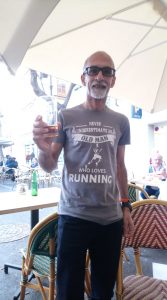